Friday, May 14, 2021: Today on Days of Our Lives, Nicole confides in Rafe, Sami and Lucas rehash their past, Brady makes a decision about Kristen, and Jake learns the shocking truth. 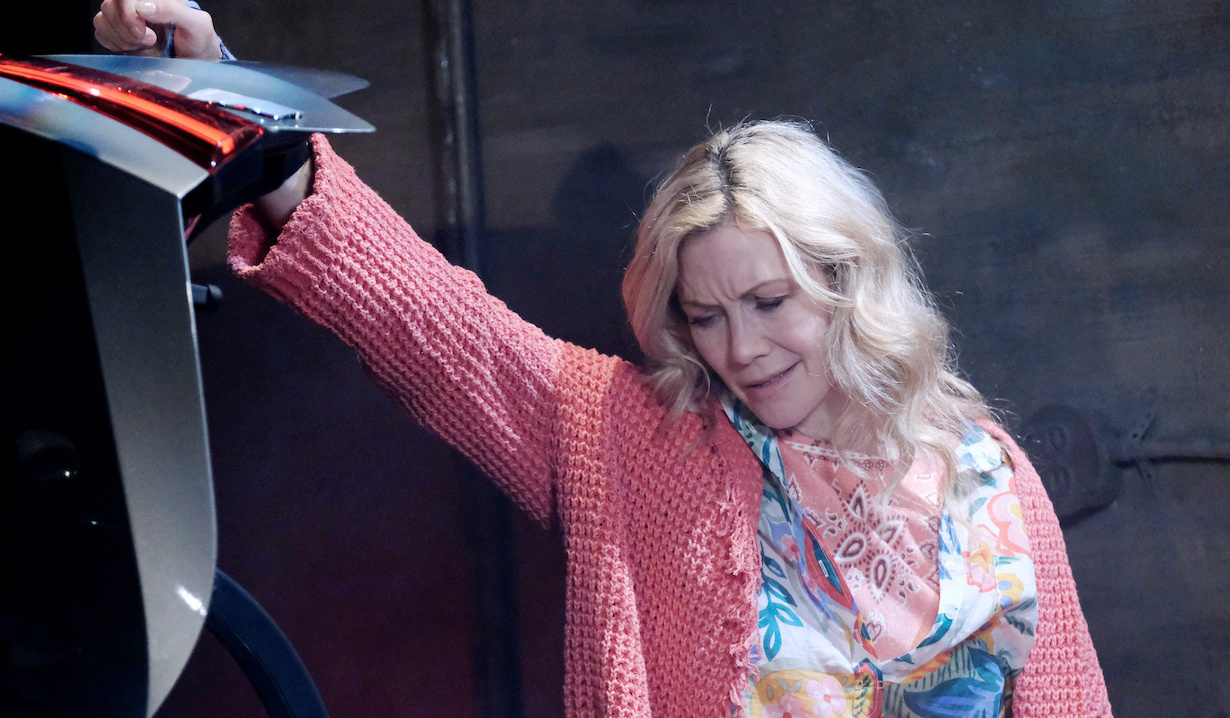 Lucas comes to while lying in Sami’s lap in the wine cellar. After trading kidnapping stories, Sami tells Lucas Kate escaped from Kristen but no one can find her. Lucas blames Sami for their predicament since she caved to Kristen’s blackmail. Sami can’t believe she cheated on EJ. She calls herself as bad as Nicole, who she saw stumble into the Salem Inn with Xander. Lucas doesn’t think Nicole would cheat on Eric but defends her if she did because her husband has been gone. They bicker while bringing up the past between them and EJ. Sami says sleeping with Lucas was the biggest mistake of her life. Lucas counters if EJ can’t forgive her then EJ doesn’t deserve her. She tries to slap him but he stops her hand. They kiss. 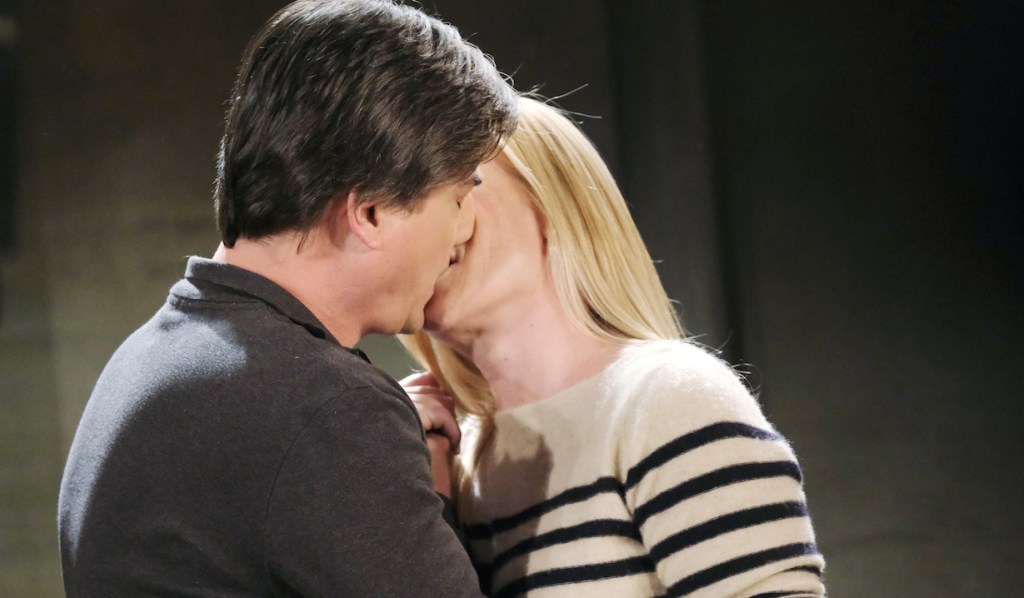 As Chloe picks up the fire poker in DiMera living room, she watches “Susan” emerge from the wine cellar. Marlena calls Chloe to tell her Brady’s out of surgery and doing well. “Susan” wants to rush to the hospital to see him but first, Chloe wants to know why she’s at the mansion. “Susan” claims she got a sign to come there. Chloe doesn’t buy any of her excuses and walks towards the tunnels to check it out herself. 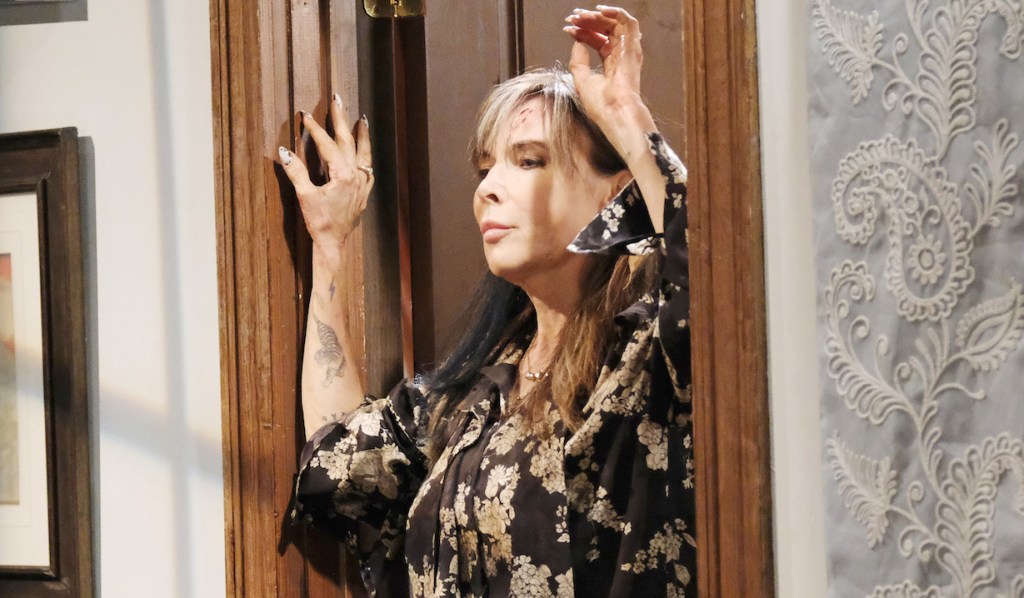 A disheveled and woozy Kate finds Jake and Gabi going at it in Gabi’s bedroom. When they throw on robes, she tells them she wasn’t the one who dumped Jake, it was Kristen. After detailing the whole story, Gabi says, “Only you could survive that.” Kate agrees and then starts to leave. Jake stops her. Kate waves him off, pointing out it took him less than two days to get into Gabi’s bed. She tells him to get back to what he was doing because the two of them deserve each other. 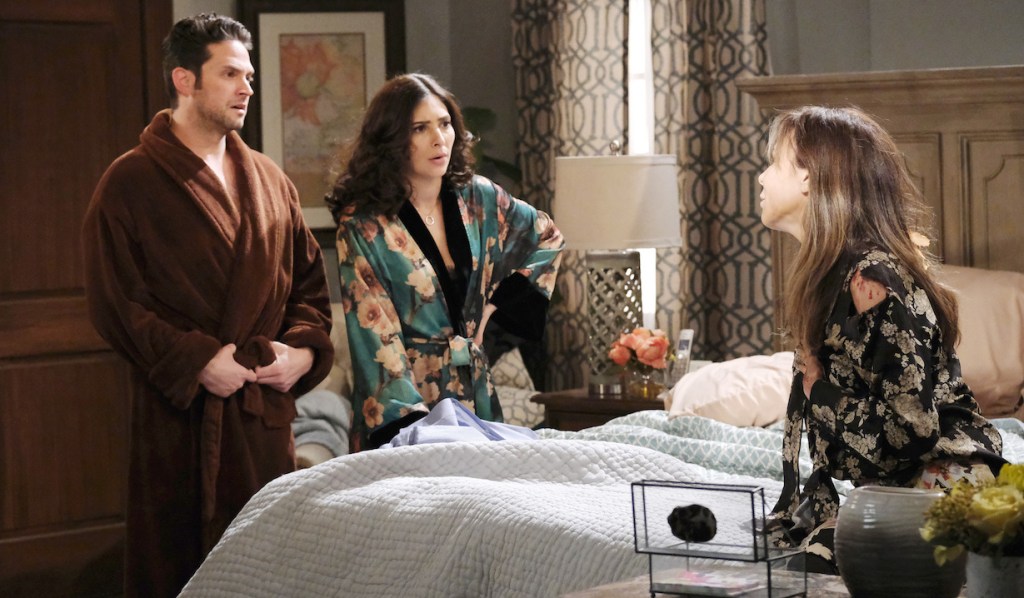 Kate unevenly makes her way downstairs to find “Susan” trying to prevent Chloe from going to the tunnels. Kate tells Chloe everything Kristen’s done, including breaking out of prison to keep her away from Brady. “Susan” denies it but it all makes sense to Chloe. She rips off Kristen’s wig. Kristen grabs Chloe and puts her in an armlock. 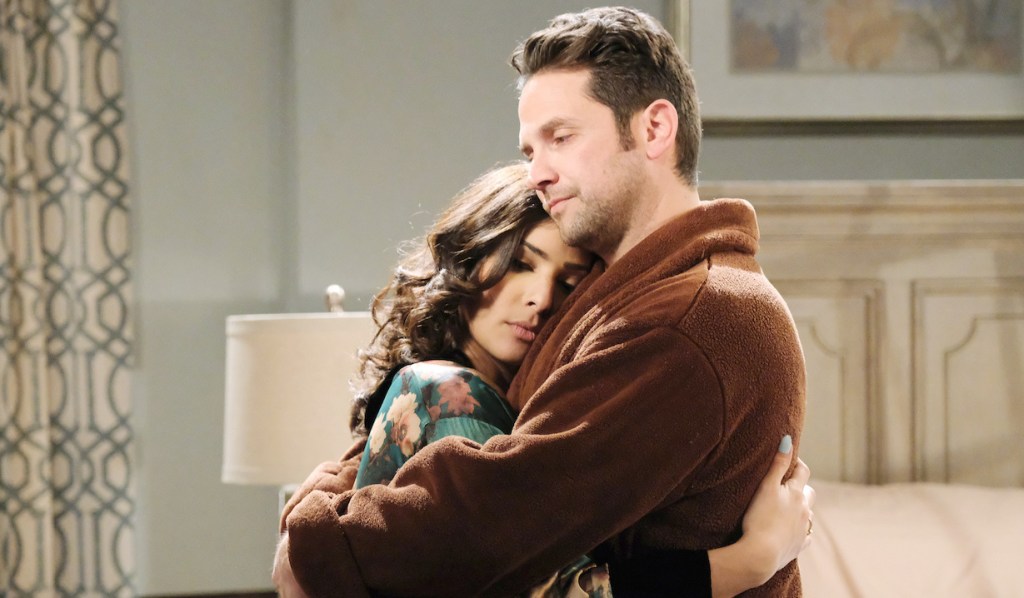 In his hospital room, Brady tells John Kristen is impersonating Susan. Marlena joins them and gets updated on the situation. John says they need to find Kristen. Marlena suggests they start in the chapel but they have no luck. When they return to Brady, he asks John not to call the cops. He thinks he can persuade Kristen to go back to prison on her own. Marlena calls to warn Chloe but she doesn’t answer because Kristen has her in a hold. Marlena then calls “Susan’s” and Sami’s phones but Kristen ignores them both. John and Marlena tell Brady that he might not want to admit it but Kristen is capable of hurting people. They need to call the police. Brady solemnly shakes his head. 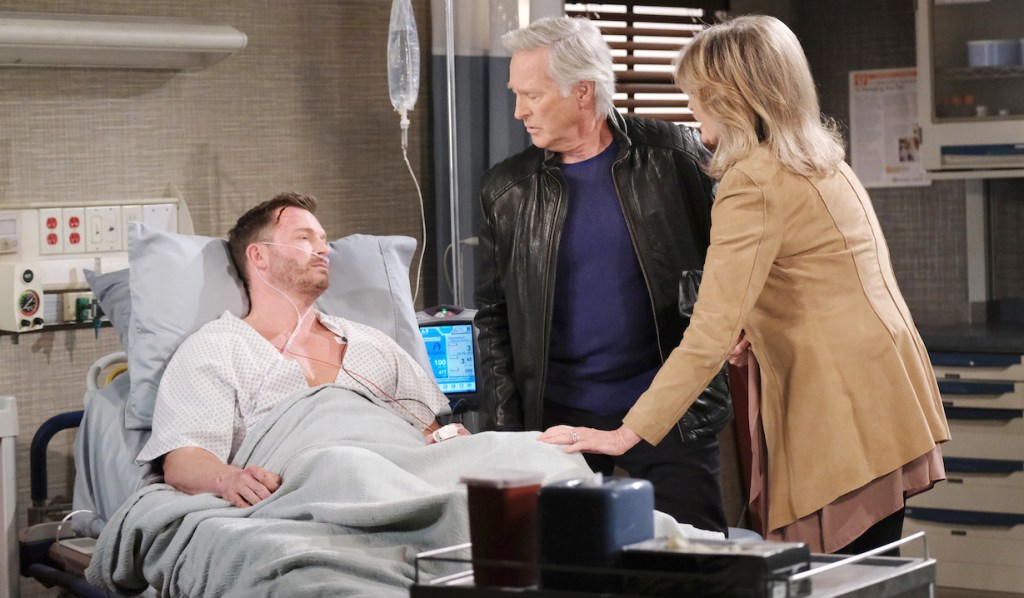 At the mansion, Chloe frees herself from Kristen’s grip. Kristen picks up the poker and threatens Chloe and Kate with it.

Nicole explains to a suspicious Rafe in the Square that she had an early breakfast meeting. Rafe knows she’s wearing the same dress as yesterday. Nicole tries to cover but Rafe notices something’s wrong. Nicole explains Eric extended his stay in Africa. She thinks her marriage is over. They sit at a table as she confides in him. Rafe is sorry he wasn’t there for her when she called. Nicole tears up as she admits she got drunk last night. She lies that she didn’t want Allie to see her like that so she got a room at the Inn. Rafe is sorry she had to go through that alone. He assures her he’s there for her and hugs her. Rafe detects a patchouli scent on her. Nicole stammers that it’s a new scent Basic Black was trying out. She asks about his date with Ava. Rafe says it was fun. Nicole walks away crying.

More: Fun, romance ahead for Allie, but with who? 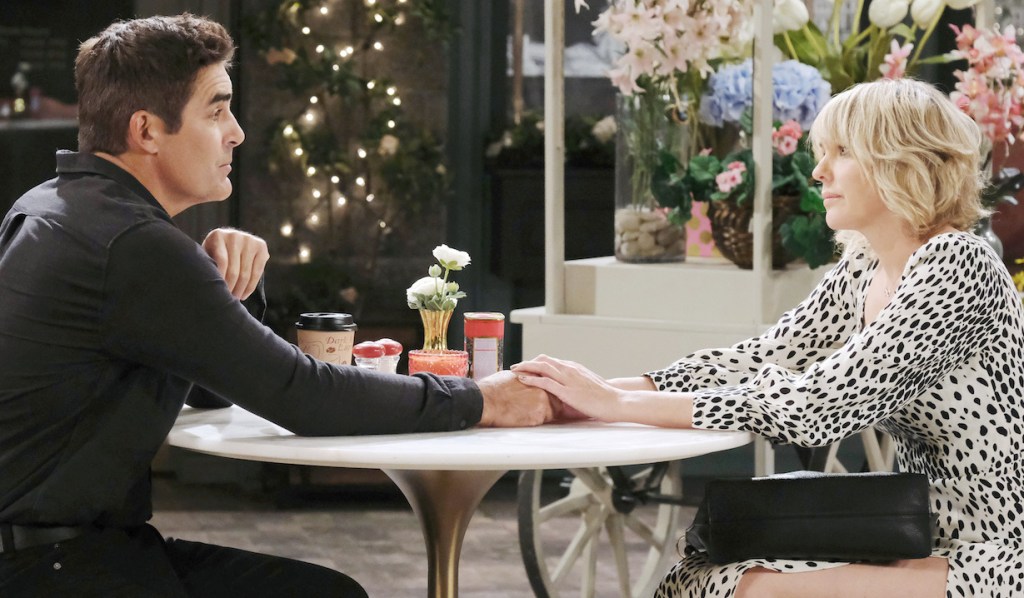 At home, Nicole looks at a photo of Eric. She cries as she reiterates that she slept with Xander and lied to Rafe about it. “Nice work, Mrs. Brady,” she says. She sadly leaves the room to wash off Xander’s stink.

Jake enters the DiMera living room calling Kate’s name. He finds her passed out on the floor, as Kristen puts a tied-up Chloe in the trunk of a car.

Next on Days of Our Lives: Kristen reaches out to an ally , and Lani’s shocked by Chanel’s recent adventures.

Can’t remember how Gabi got to this point in her life? Relive Gabi’s most memorable moments on Days in our photo gallery below. Then, get all the news for Days of Our Lives — and all of the other daytime dramas — delivered straight to your email inbox by signing up for Soaps.com’s newsletter. 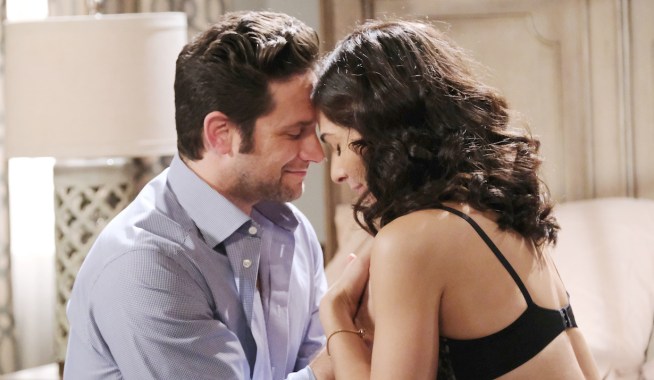 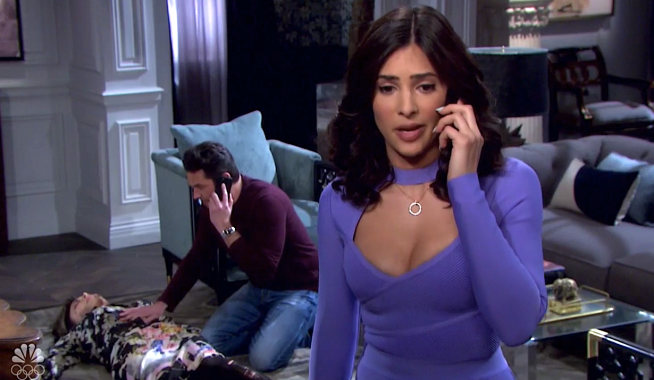