Thursday, May 6, 2021: Today on Days of Our Lives, Belle and Shawn discover new evidence, Jan is determined to kill again, and Nicole feels jealous of Rafe. 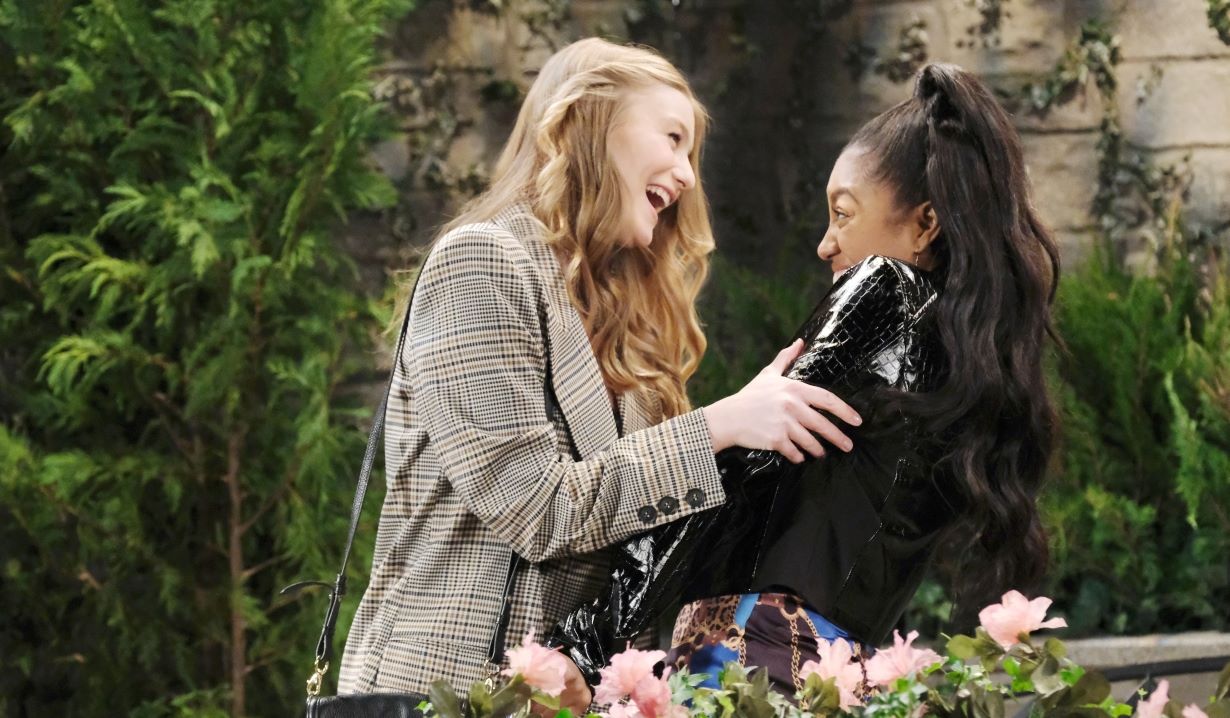 Allie joins Roman in the park. He’s been looking after baby Henry and tells her what a great mother she’s been. He offers to look after the kid longer so she can take a break. After he and the baby take off, she bumps into Chanel and they recall the last time they saw each other in London. They decide to have lunch and day-drink. 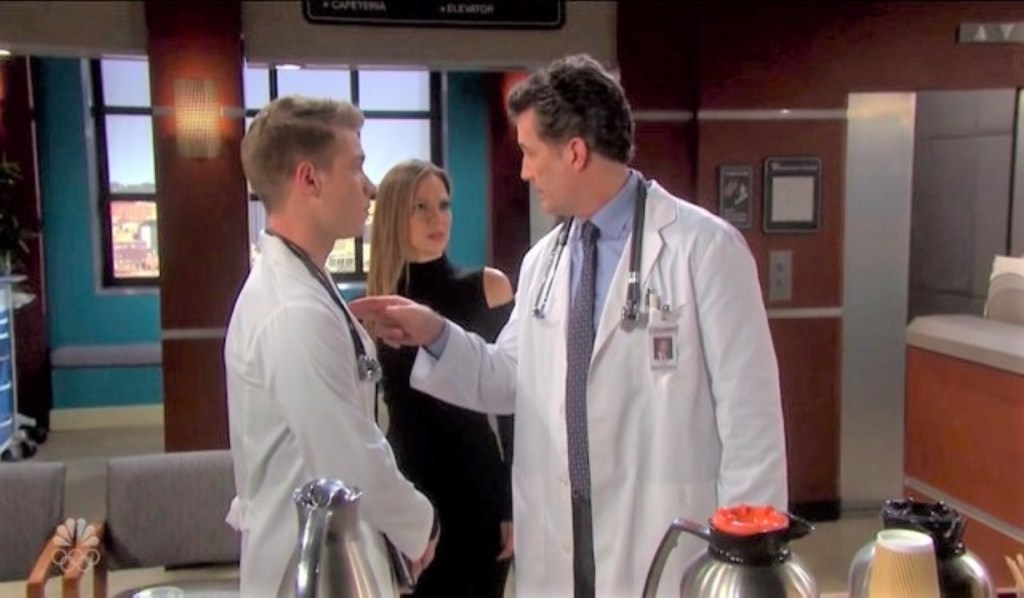 At Salem University Hospital, Tripp is lectured by Dr. Snyder for being too comforting to a patient. Ava intrudes and yells at him to keep his paws off her son. Snyder says her son is lucky the hospital has kept him around given his legal problems. He walks off and Ava is livid. After some prodding from his mother, Tripp admits that he and Allie were holding hands when Snyder walked in and jumped to the wrong conclusion. His mom wonders if the conclusion was wrong. He says they can’t be together because of their history. She tells him about starting over and mentions her date with Rafe. He thinks Rafe’s a great guy. His mom encourages him to give things with Allie a chance.

More: Why Victoria Konefal might have to be replaced 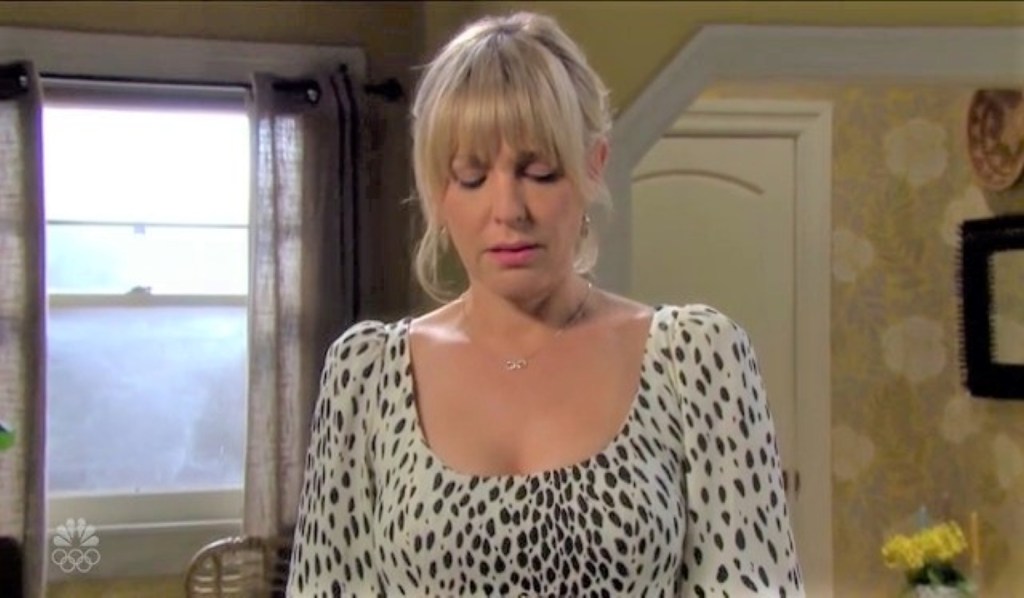 At Nicole’s, she thinks about confronting Ava for kissing Rafe. 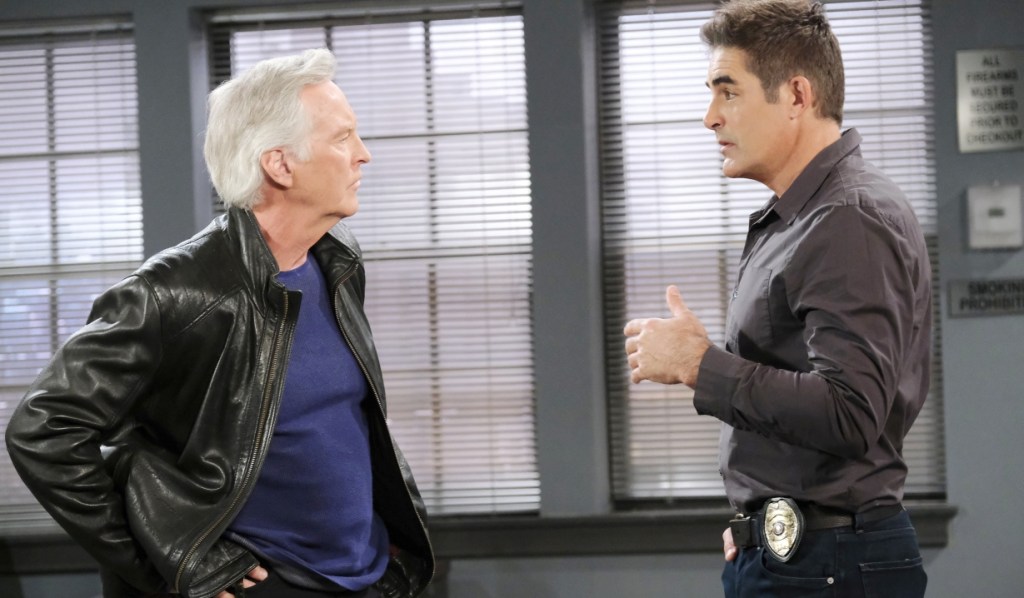 John stops by the Salem PD and Rafe tells him Trask is furious he won’t corroborate anything that incriminates Belle. He’s determined to find out who is framing her and nail them to the wall. Rafe goes into his office and Nicole shows up. She hands him his stuffed bear. He’s been missing it and guesses she’s there because he kissed Ava. Nicole cares about him and doesn’t think a cop and mafia princess are the best pairing. But if they end up together, she’ll be happy for them. She’s not happy when he says he and Ava are going out for dinner. Nicole admits she’s jealous because she’s missing out on romance. He thanks her for looking out for him. Awkwardly, they hug and she wishes him well. He sits at his desk and thinks about her.

Nicole bumps into Ava in the square and Ava asks if she can help her pick something out for her date.

Tripp runs into Roman outside the park. Roman tells him where Allie is having lunch.

More: A tribute to Peter Reckell’s debut as Bo Brady 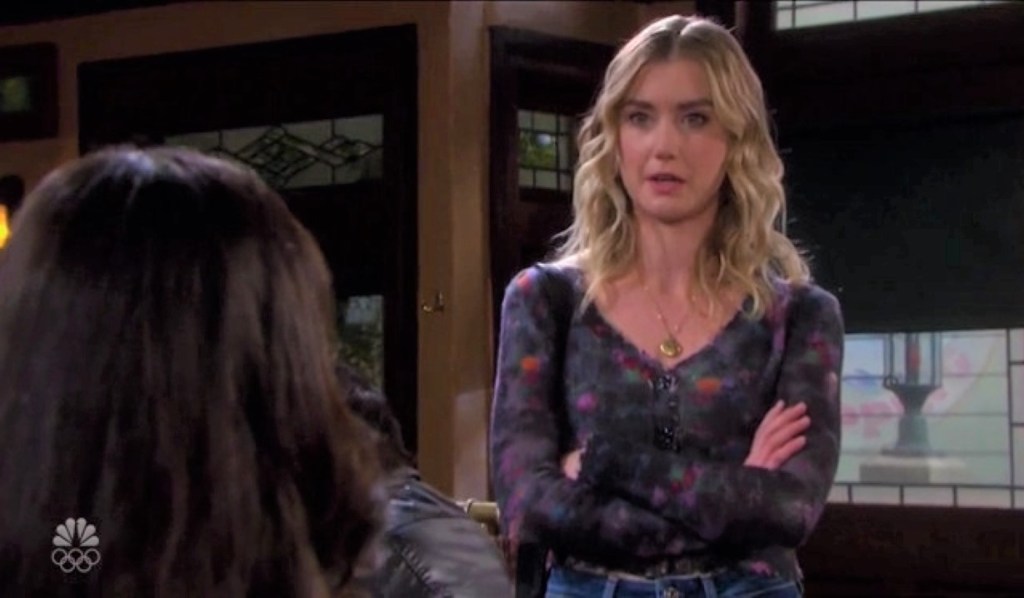 Claire walks into the pub as Jan tells herself about her future with Shawn. Claire protests that her mom is not going to prison. Jan tells her that her mom is a hero and they need to show their gratitude by moving on and being happy. They may not be friends, but they can be family. She’ll be her “bonus mama” while Belle is locked up. Claire insists they will never be a family. Jan is disappointed given what she’s done for her… bonding over mental illness. Claire accuses her of using her to get at Shawn and orders her to stay away from her family. After Claire storms off, Jan says she will kill again to get what she wants. 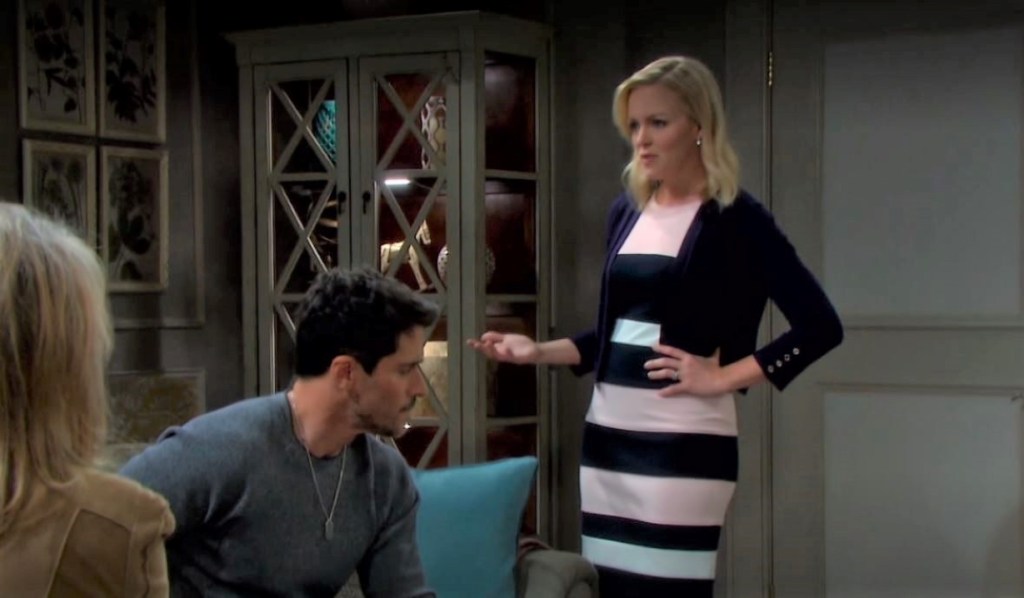 At Marlena’s penthouse, Belle tries to convince Shawn and the doctor of Jan’s guilt. She suggests that Jan must have woken up earlier than they thought and no one knew. They run over how she might have escaped to kill Charlie. Once they leave, John returns and Marlena tells him of the new theory. 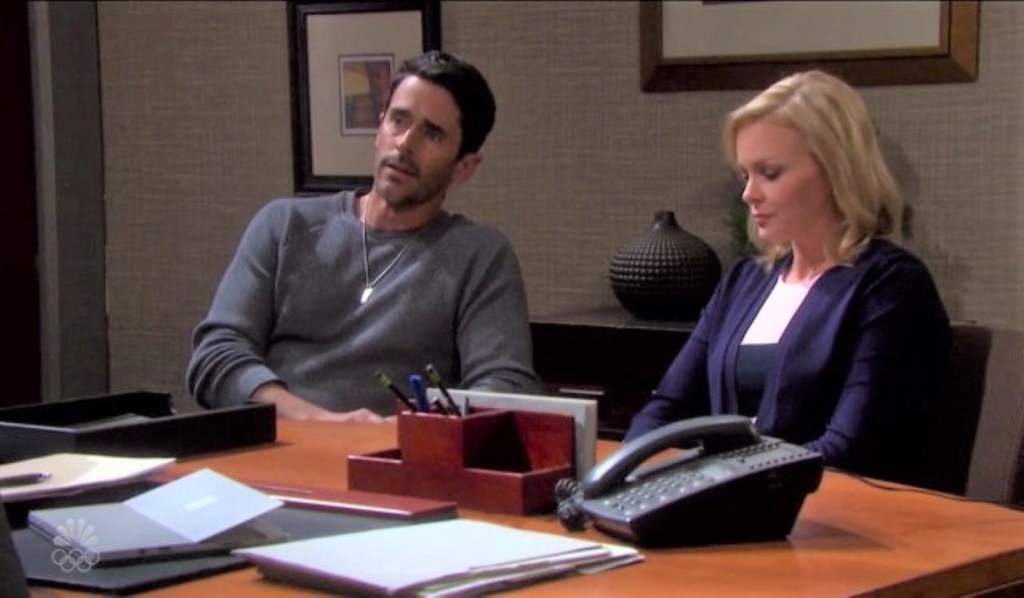 Belle and Shawn meet with Dr. Snyder in his office at the hospital and ask if it’s possible Jan woke up earlier than they thought. The doctor says no and then hands them a few months of surveillance footage before taking off. They soon discover footage of Jan sneaking out on Valentine’s Day. When Snyder returns, they show him the time stamped footage. He insists the hospital is not responsible for this and walks out again. Belle wants to take the evidence to the police, but Shawn says that’s the last thing they should do. They need more definitive evidence. 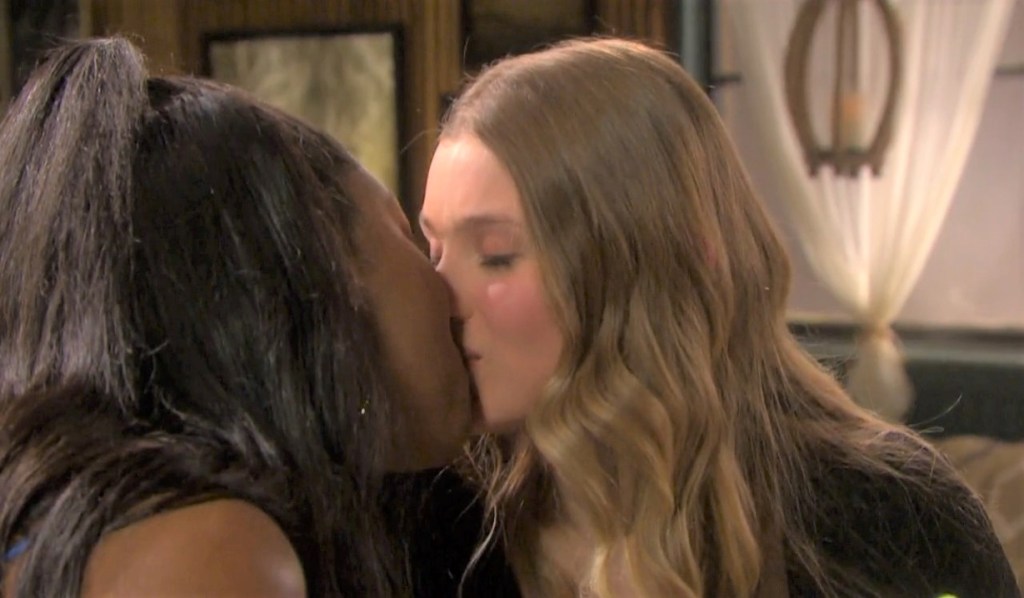 Chanel and Allie have cocktails at Julie’s Place. After hearing about Chanel’s quickie marriage, Allie tells her about her baby and the father being murdered. After unpacking that, she says she has a thing for Charlie’s half-brother but it’s complicated. They toast to the future and miss sleeping and shopping all day. As they laugh about how much they miss that time, they kiss just as Tripp walks in.

Next on Days of Our Lives: Kate fights for her life.

Check out the gallery of hilarious outtakes from soap star photo shoots and then get your free daily soap-opera fix for Days of Our Lives — and all of the other daytime dramas — delivered straight to your email inbox by signing up for Soaps.com’s newsletter. 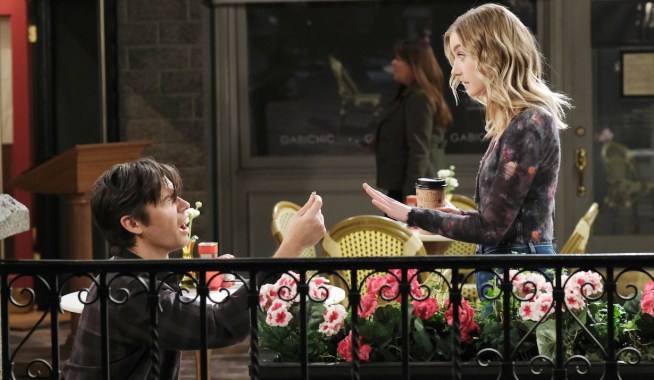 A Drunken Xander Gets Down on One Knee With Claire — Plus, Belle Has an Epiphany About the Wannabe Mrs. Jan Brady 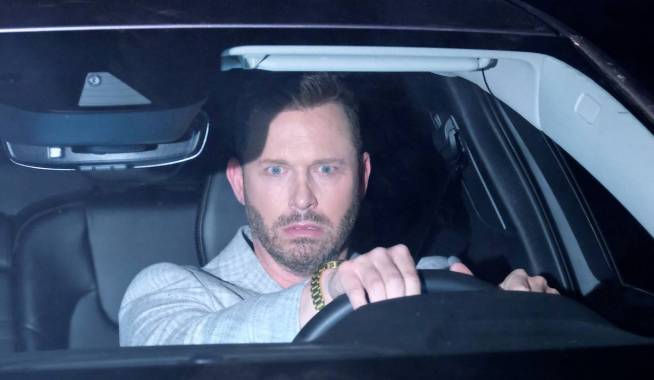