After Receiving Devastating News, Gwen Has a Dangerous Altercation With Abigail

Friday, April 30, 2021: Today on Days of Our Lives, Allie and Tripp can't hide their feelings, Gwen has a traumatic day, and "Kate's" done with Jake. 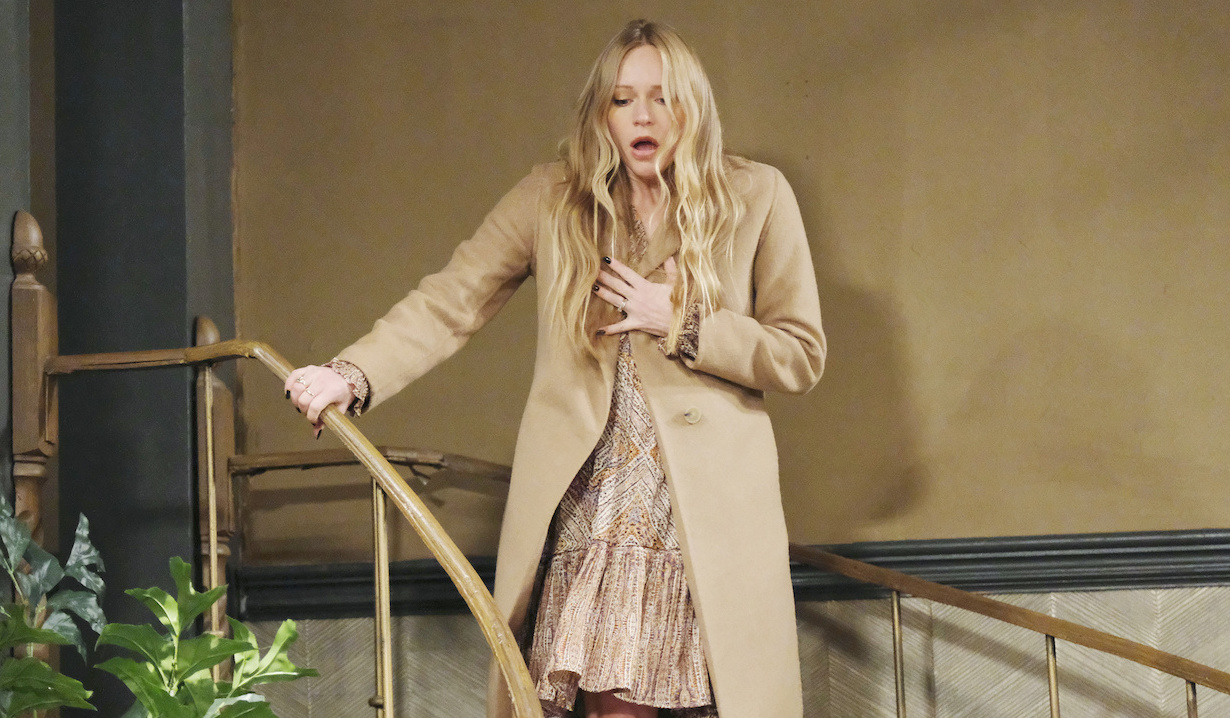 When Kristen, disguised as Kate, enters Brady’s Pub, Jake asks why she didn’t show up for their trip. “Kate” tells him they need to end things… right now. She goes along with it when Jake assumes it’s about him admitting he was jealous of Gabi and Philip. “Kate” won’t wait around to be dumped. She also says their age difference bothers her so she’s moving out of the mansion and resigning from DiMera. Jake won’t accept that and grabs her arm before she can leave. Roman walks over to diffuse the situation. Jake knows he’s not getting the whole story. He won’t stop until he finds out the rest.

More: The most successful daytime actors in primetime, ranked 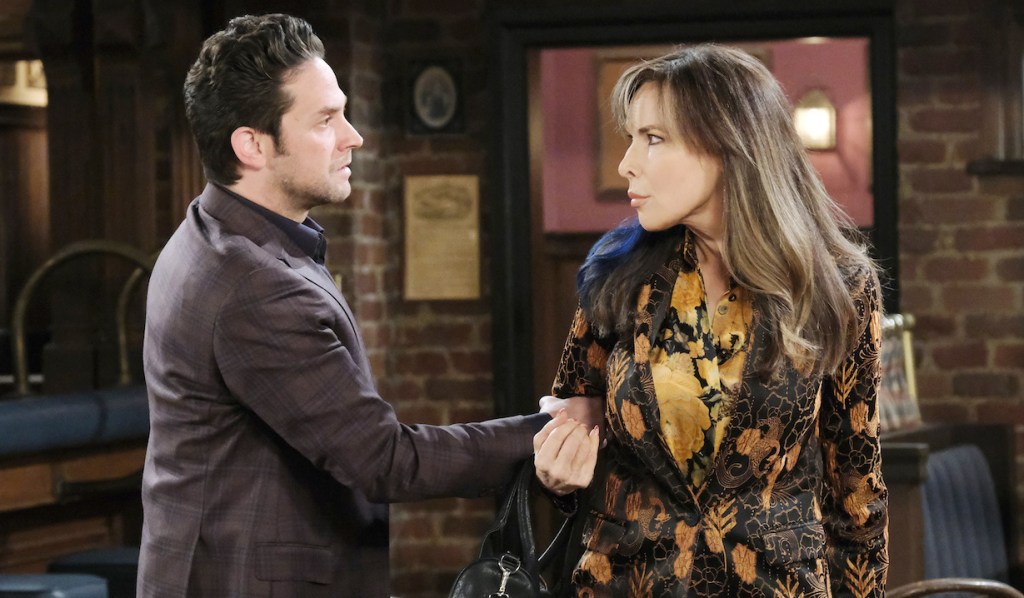 After Jake has left, Roman reiterates to “Kate” they are a good match. He wonders if she might be thinking about them getting back together.

At home, Chad tells Abigail how much it means to him that she’s willing to try and fix their marriage. She admits Gabi was the one who convinced her to focus on the good in her life. Chad wonders why she was confiding in Gabi. Abby didn’t have anyone else to talk to. Besides, she needed someone who hates Gwen as much as she does. However, Abigail will now pretend Gwen and the baby do not exist.

After talking with Jennifer, Jack enters the DiMera mansion. He tells Chad and a furious Abigail Gwen is moving in with him. Abigail doesn’t think he cares how she feels. So, he should just go ahead and do what he wants. She storms out. Chad is glad Jack convinced Gwen to stay in Salem and assures him, if nothing else, Gwen and the baby will be taken care of financially. Chad’s worried though. He doesn’t think it will take much more to push Abby over the edge. 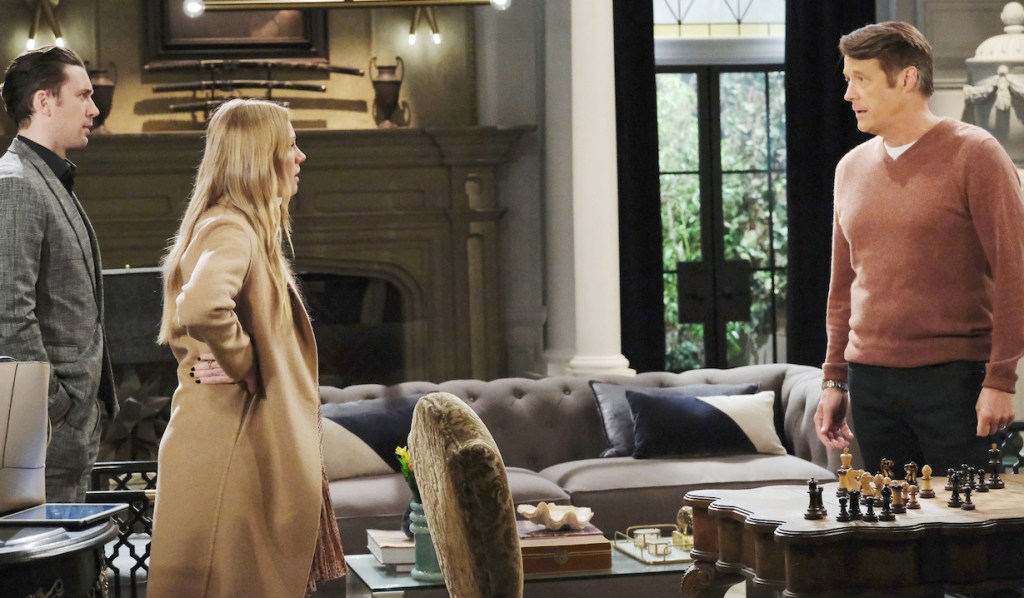 Elsewhere in the mansion, Abigail calls Jennifer who encourages her to be civil to Gwen for Jack. Abigail can’t do that.

Dr. Snyder interrupts Tripp and Allie’s close moment at the hospital. The head resident orders Tripp to tell him what’s going on. Tripp tells him Allie is a friend who brought her baby in with an ear infection. Dr. Snyder asks for a word in private with Tripp. 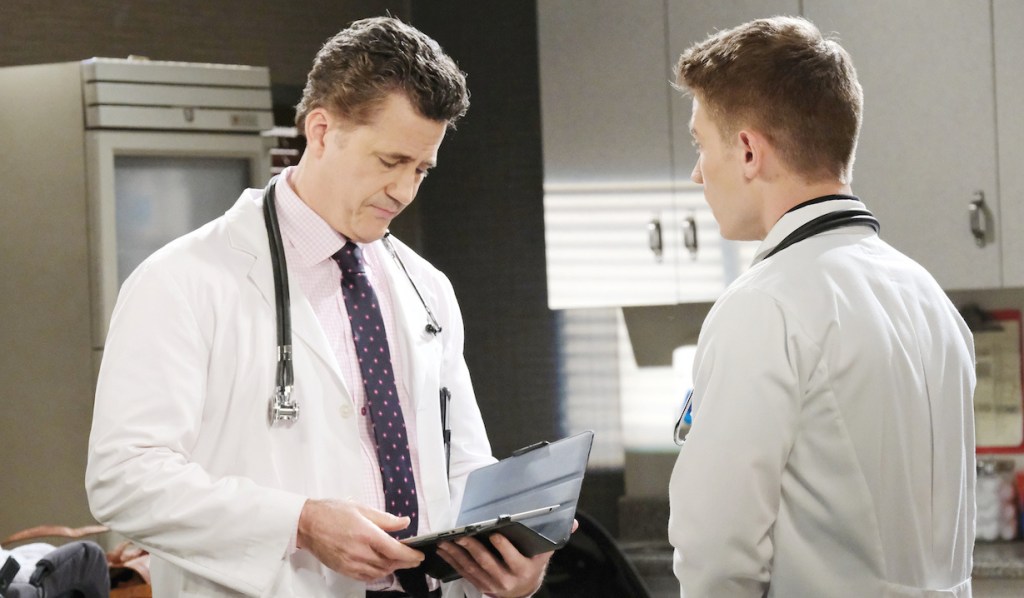 At the hub, Snyder tells Tripp his behavior was unprofessional and a breach of ethics. He orders Tripp not to let it happen again and suggests he go on a break. Tripp passes Gwen as she steps off the elevator. She tells Snyder something’s wrong with her baby.

After performing an ultrasound in an exam room, Dr. Snyder tells Gwen there is no heartbeat. She miscarried. Snyder urges a devastated Gwen not to blame herself. Some things just aren’t meant to be. This does not comfort Gwen who asks the doctor to leave her alone. Before he does, Gwen asks if her baby was a boy or girl. He tells her it was a girl. 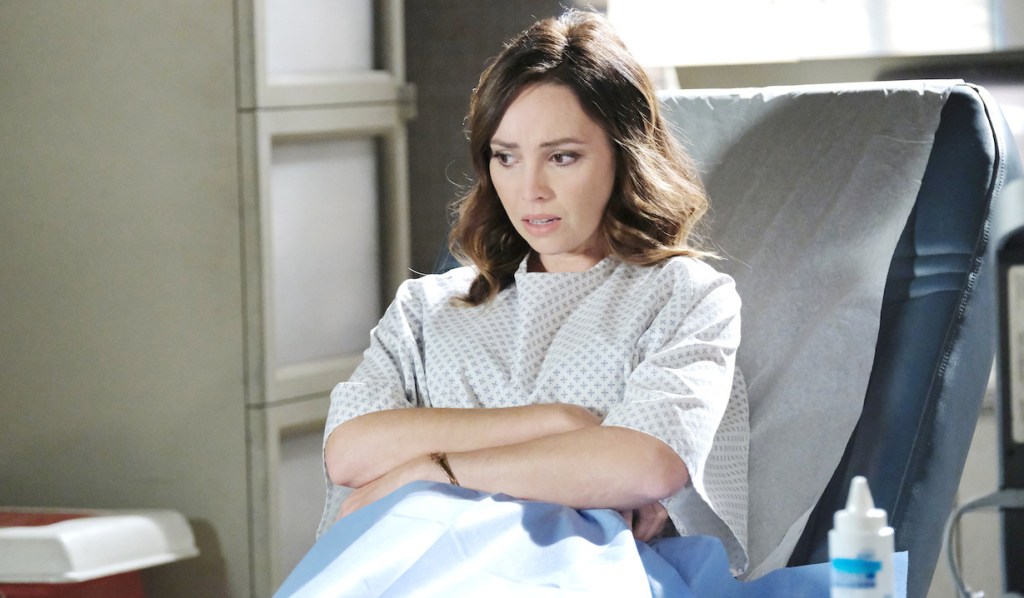 Gwen comes to the mansion looking for Chad but finds an angry Abigail instead. Abigail rails at an emotional Gwen about what an awful mother she will be. Abigail cries and slaps her. They move to the top of the stairs where they continue to argue. Abigail grabs Gwen and says she wants her and the baby out of her life for good. Jack and Chad walk out to the foyer as Gwen goes flying down the stairs. 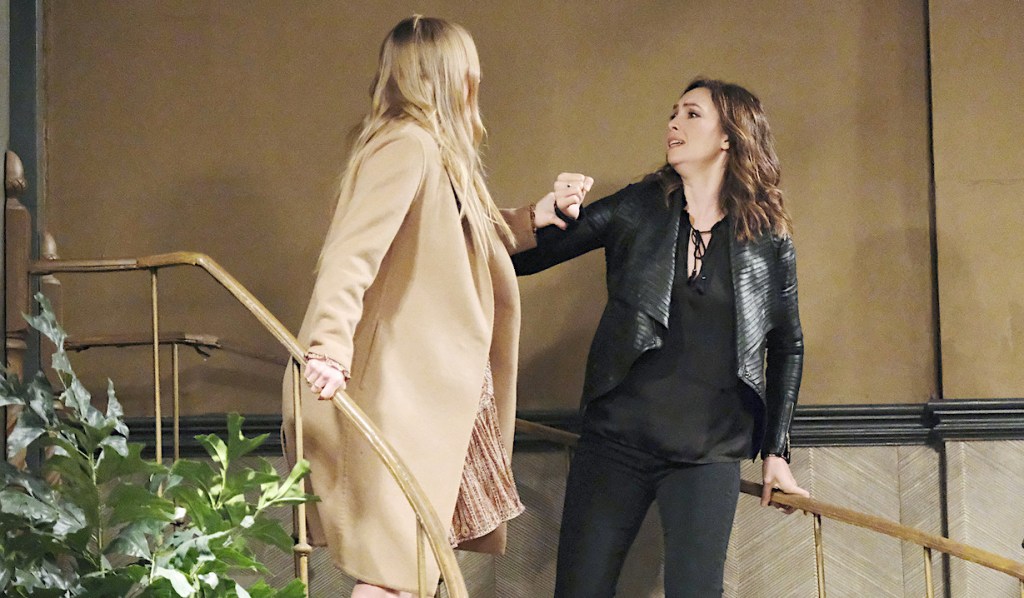 Ben returns to see Claire at home. He came to apologize and gives her flowers. He explains he couldn’t go through with kidnapping Ciara after all she’s been through. He had to let her go. Claire hugs him when he tears up. She knows Ciara will get her memory back and come back to him. Ben doesn’t know what he’s supposed to do anymore. Ciara was his whole life. How will he get through his days?

Ben leaves when Allie and Henry show up. Claire updates her cousin on Ben and then Allie tells her about Henry’s check-up with Tripp. Claire smiles as she says, “You do like him don’t you?” Allie admits it. She hasn’t felt this way about a guy in a long time — like she wants to kiss him. However, she worries about the circumstances surrounding how they met. Claire suggests they shut the door on the memories of Charlie. Allie says it’s one thing to shut the door and another to open it to something new. Claire thinks she and Tripp could have an amazing future. After Allie leaves to get Henry’s prescription, Claire looks at Ben’s flowers.

After getting coffee in the Square, Tripp sees Ben drinking alone at a table. Ben fills him in on Ciara. Tripp is sorry. He knows they really loved each other. Ben remarks on his doctor’s coat leading Tripp to tell him he just checked out Henry. Ben notices Tripp’s smile when he talks about Allie. Tripp says he has liked her since he first saw her but everything went haywire. Ben says if there’s anything he’s learned, it’s that anything is possible when it comes to love.

Next on Days of Our Lives: Roman romances “Kate”, and Gwen may be back to her old ways.

Look through our fun photo gallery of soap stars’ photoshoot outtakes. Then, get your free daily soap-opera fix for Days of Our Lives — and all of the other daytime dramas — delivered straight to your email inbox by signing up for Soaps.com’s newsletter. 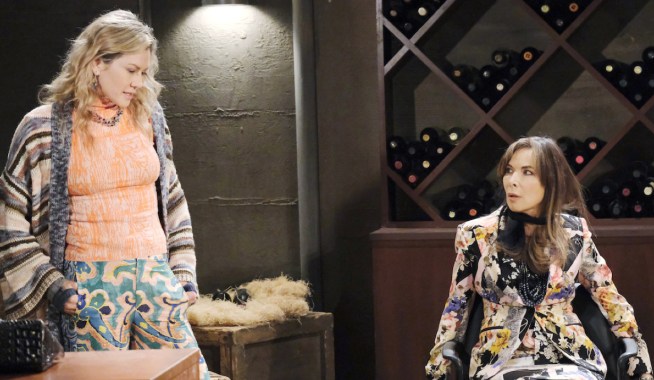 After Falling Down the Stairs, Gwen Hurls an Outrageous Accusation at Abigail 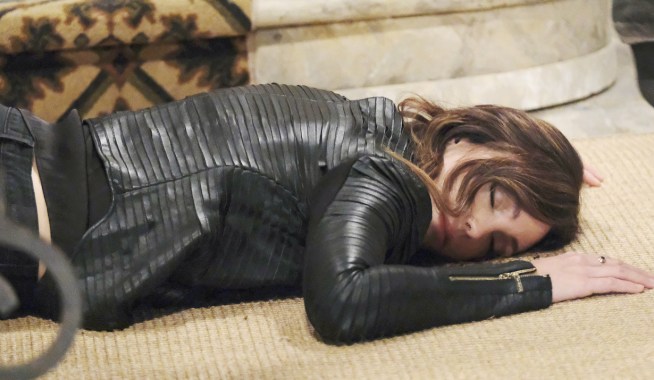