Monday, March 29, 2021: Today on Days of Our Lives, Xander drowns his sorrows, Chloe has something to tell Brady, and Susan wants out. 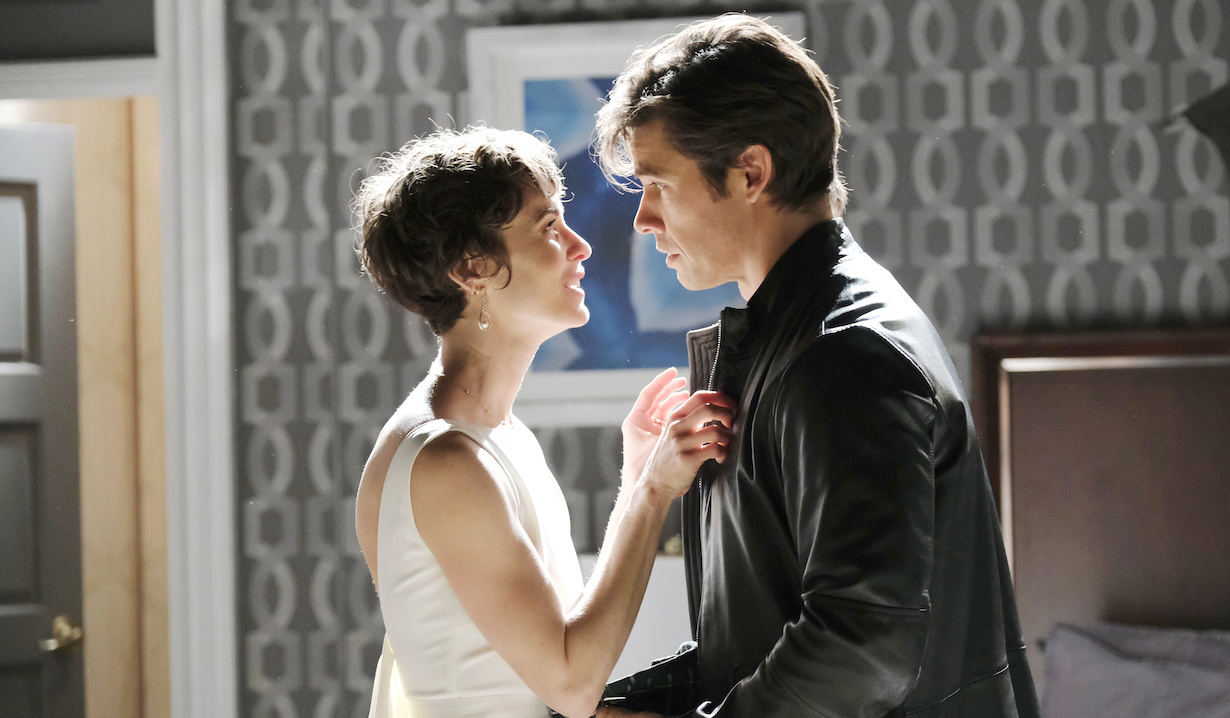 As Gabi and Philip walk through the Square, they pass the old Gabi Chic store. Gabi rants about losing the space, but Philip says he’s looking at expanding in Chicago. He suggests they talk about it over dinner. Gabi hesitates… she’s still getting over someone. He is too. It would just be a business dinner. Gabi says it’s not just business for her since Gabi Chic is all she has. He knows. Gabi agrees to dinner and they walk off.

More: Could Philip and Gabi be Days’ next supercouple? 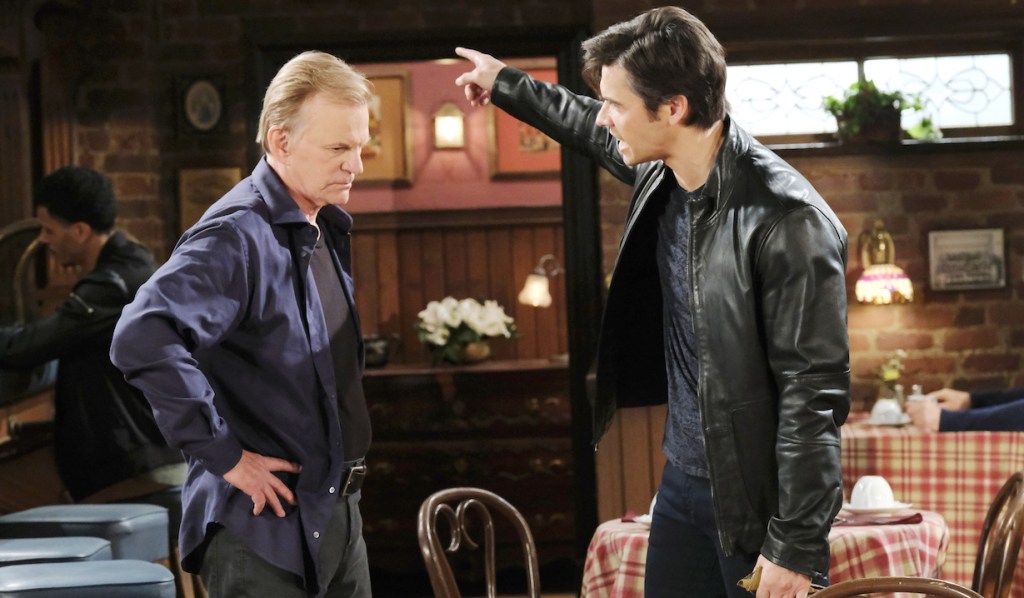 Kate talks to Roman over the phone while in her room. She holds a bag of ice to her head as they discuss Sami, Allie, and Rex. Roman hangs up when a drunk Xander barges into Brady’s Pub. He’s there to get his fiancée back from Rex. Roman tells him they both left town. Xander asks for a drink, but Roman won’t serve him considering he’s walking around with an empty scotch bottle. Xander gets in Roman’s face when he tries to throw him out. 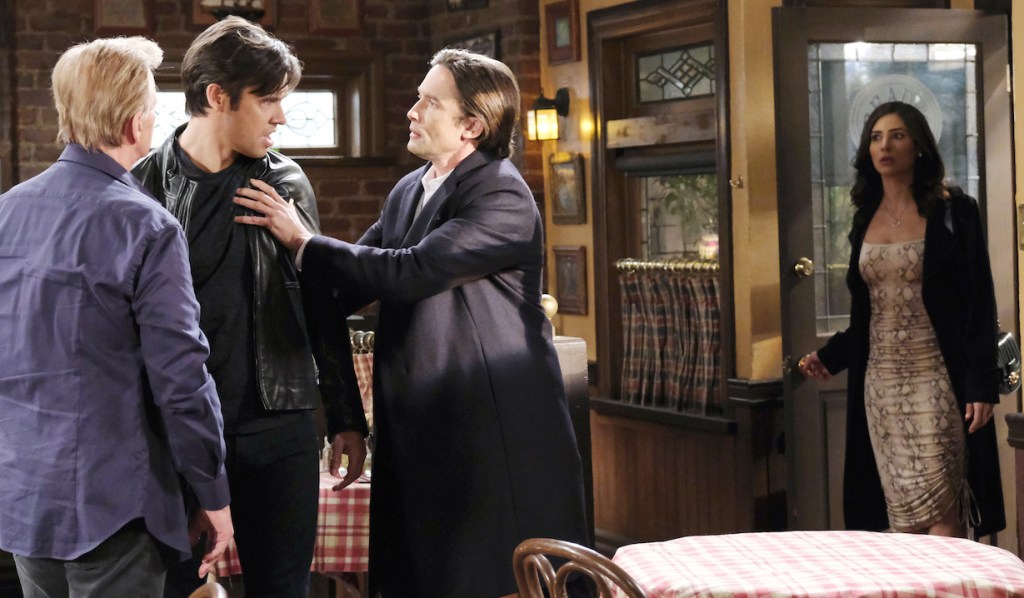 Philip enters with Gabi and tries to diffuse the situation. Xander punches him. Roman orders Xander to leave. Dejected, Xander says he doesn’t want to be there any more than they want him there. He just wants his girl back. After he’s gone, Roman gives Philip some ice and tells them he’s closing up. Gabi invites Philip back to the mansion. 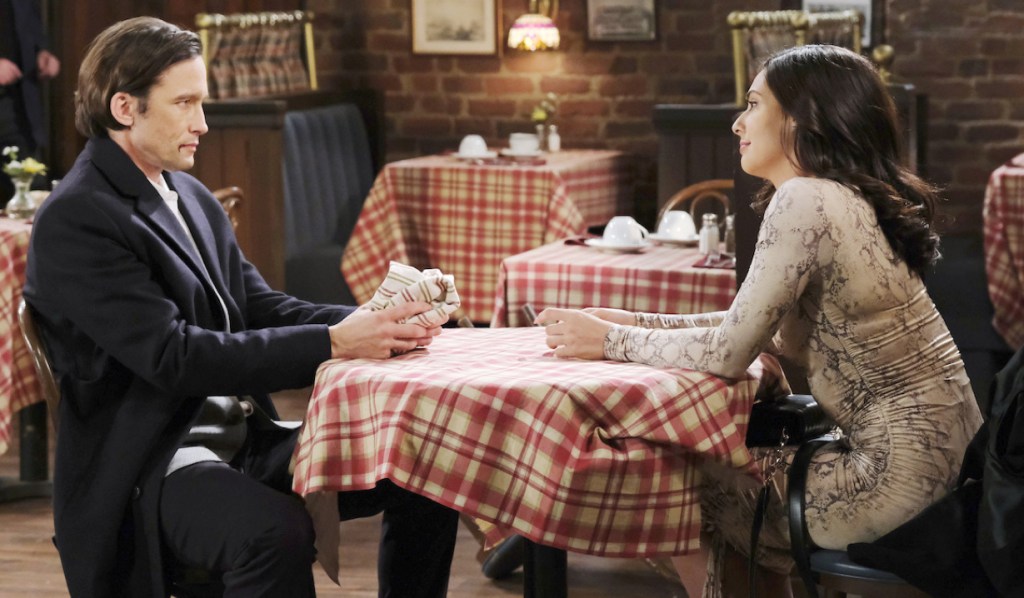 A new bottle in hand, Xander stumbles to his hotel room. Once inside, he “sees” Sarah lying on the bed in her wedding dress. In his drunken fantasy, Sarah begs Xander to forgive her for leaving him for Rex. All she wants is to marry him. When he excitedly turns to put on his kilt, he falls onto the bed and sees that she’s gone. He calls out her name. 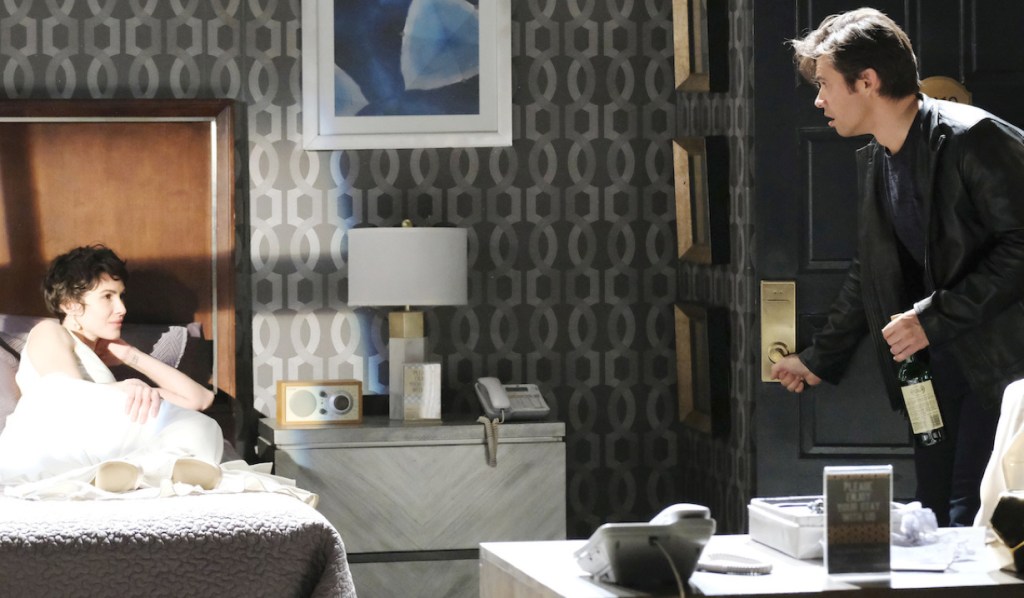 Jake finds Kate lying on their bed with ice to her head. She explains she has a tension headache considering her gun is tied to a murder case and Rex left town with Sarah. She worries Xander won’t take it lying down, but Jake thought he changed when he fell in love. Kate rolls her eyes. Jake offers to get a couple of guys from Philly to send Xander a message. Kate calls that a sweet gesture. She starts to undo his tie as they kiss. After they have sex, Jake suggests they get dinner, but Kate wants an hors d’oeuvre first. They start making out again.

More: Remembering John Callahan on anniversary of his death 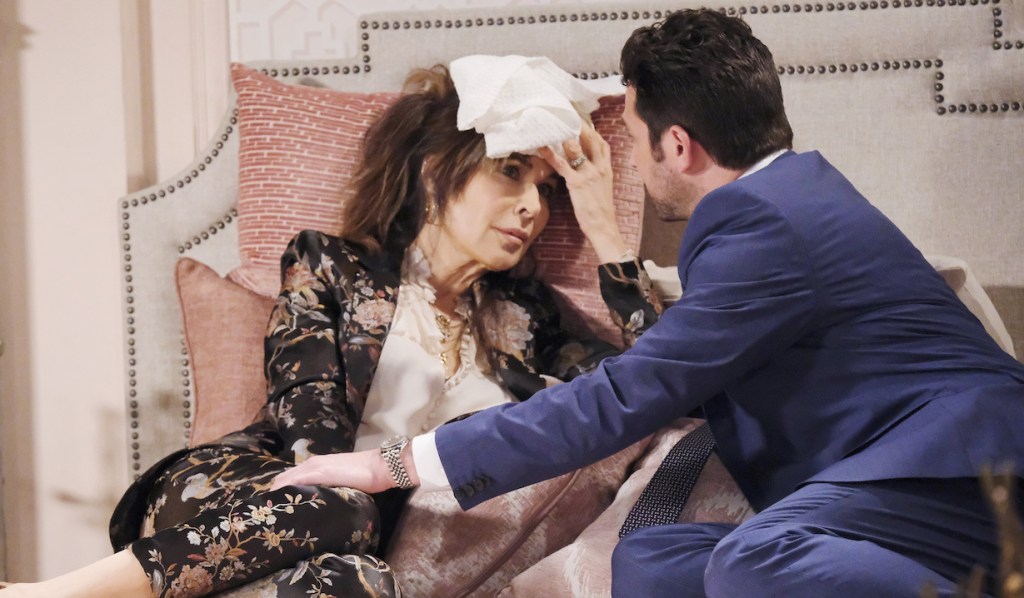 Downstairs at the DiMera mansion, Gabi notices blood on Philip’s shirt. She tells him to take it off and she’ll get him a new one. He complies. Later, Jake and Kate enter to find Gabi tending to Philip in his tank top.

At Basic Black, Brady and Chloe marvel over Sarah leaving Xander for Rex. Brady revels in Xander’s pain, but Chloe feels sorry for him. Chloe thinks he changed when he fell in love with Sarah. Brady scoffs. Chloe knows what it’s like to have her heartbroken and wouldn’t wish that on her worst enemy. Brady takes her hand. It means a lot to him that she was willing to let go of their past to be friends again. Chloe flashes back to talking with “Susan” about her feelings for Brady. She says she has something to tell him. Brady’s phone interrupts her. It’s a reminder that Statesville visiting hours have started. He says he needs to see Kristen, but first, he wants to know what’s on Chloe’s mind. She says it’s not the right time for that conversation and sends him off to see Kristen. He invites her to dinner at John and Marlena’s before he leaves. 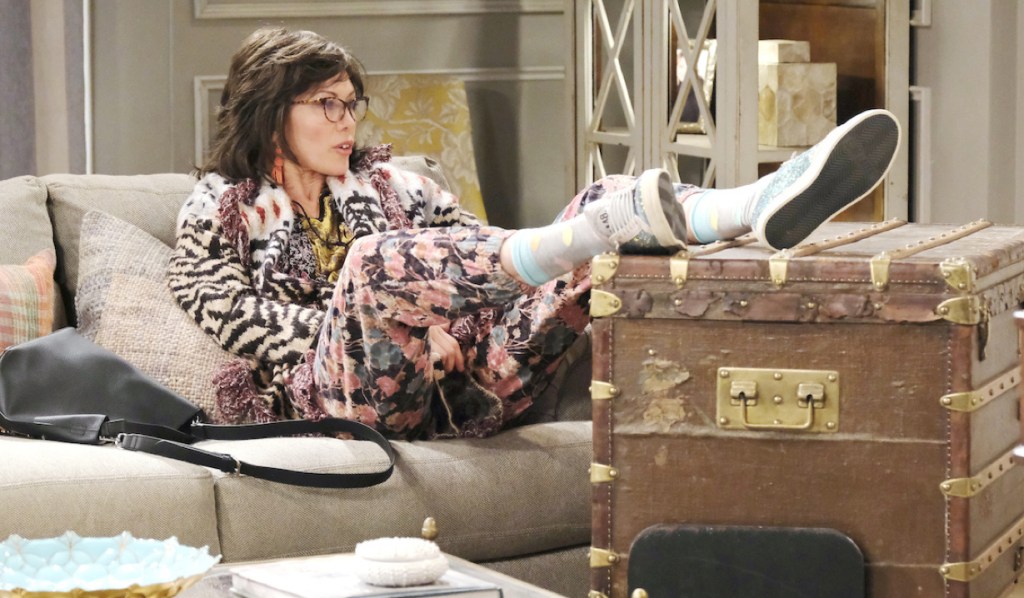 Marlena finds “Susan” on her living room couch with her feet propped up on the trunk. Marlena wonders where she was last night. Kristen flashes back to stashing Sarah in the trunk, but “Susan” says she surprised Roger while he is on tour. She was hoping she could stay with Marlena for a little bit longer though. Marlena tries to refuse her by saying things have gotten complicated there, but “Susan” just offers to be her right-hand woman. Marlena pauses before reluctantly agreeing and inviting her to join them for dinner tonight with Brady.

When Marlena leaves to talk with John, Susan calls Kristen. It’s been a month and she’s ready to get out of prison because she misses Roger. When is she going to do the “switcheroo-ey?” Kristen needs a little more time because Chloe has admitted she wants Brady. If she leaves now, she might move in on him. Kristen reverts to her Susan voice when Marlena returns. She hangs up the phone. After Marlena leaves to check on a patient, Chloe arrives for dinner, much to “Susan’s” displeasure. Chloe informs “Susan” Brady went to visit “Kristen.”

More: What does Days have against its couples? 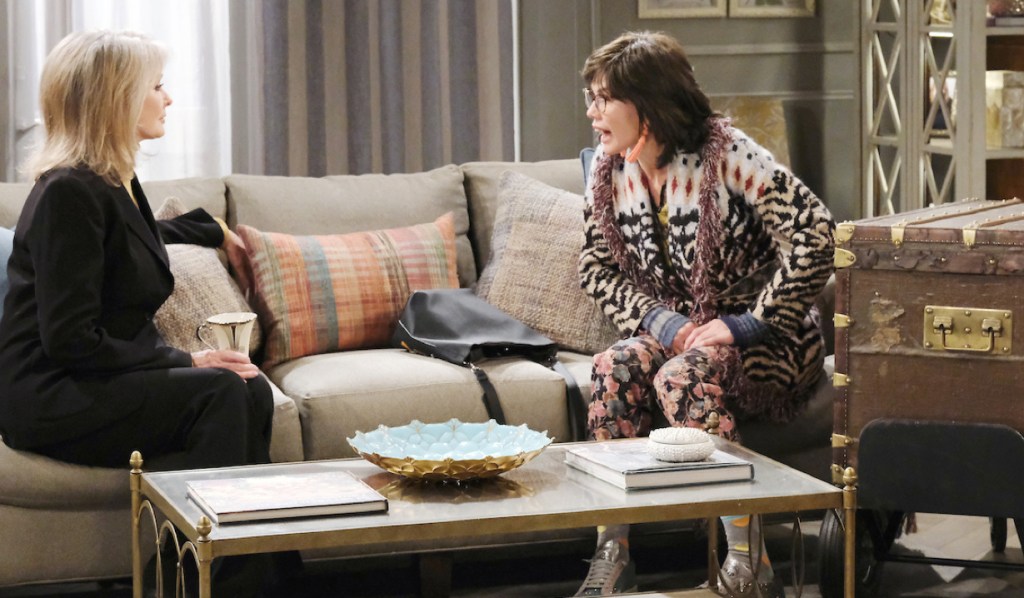 In the prison visitors’ room, Susan looks at a license plate she made for Roger and says she needs to get the heck out of there. She shouts, “You are not the boss of me Ms. Kristen DiMera,” as Brady shows up.

Next on Days of Our Lives: Kristen needs Vivian’s help while Ben turns to Marlena.

Find out who made our top ten greatest daytime villains ever list in our photo gallery below. Then, get your free daily soap-opera fix for Days of Our Lives — and all of the other daytime dramas — delivered straight to your email inbox by signing up for Soaps.com’s newsletter.

Sami 'Unconfesses' to Rafe While...