Thursday, March 25, 2021: Today on Days of Our Lives, Lani and Eli's twins are baptized, Ben tries to get Ciara to remember their love, and Lani's cousin arrives in Salem. 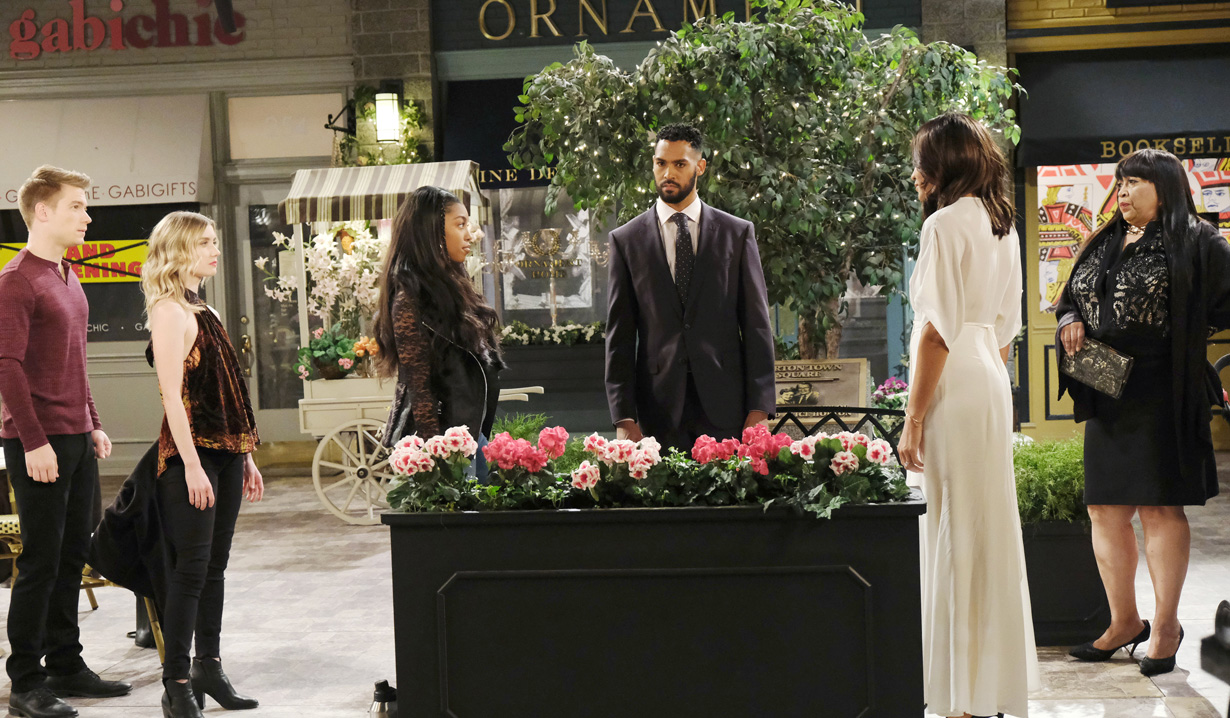 At the church, Lani thanks Paulina for what she said to Julie, and she’s sorry she didn’t clear up the misunderstanding earlier about being the godmother. The christening gets underway, and all the godparents affirm their dedication to helping take care of the children. The twins are baptized, and every one offers hugs all around. Eli asks them all to join them at Julie’s Place to continue the celebration.

Outside the Brady Pub, Tripp reads about Sami’s arrest on his tablet. He recalls confronting Charlie at his apartment that night. 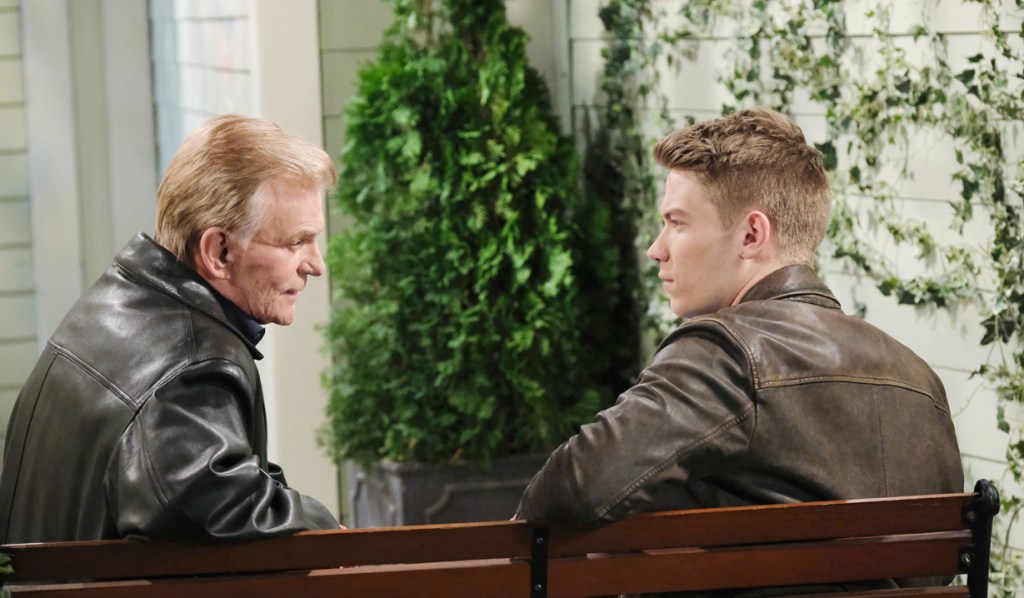 At the hospital, Ciara demands Ben get out of her room, but he refuses. She calls him the necktie killer and fears he’s going to strangle her. He says he would never do that because he loves her. Ciara knows Claire said the same thing, and her own grandfather was acting weird when she asked him about it. Ben reveals they are married and flashes his wedding ring. She accuses him of being an insane liar, so he opens his bag to prove it with proof. She agrees to look at what he’s brought if he will leave after. He shows her their wedding photo, and she’s stunned. She claims it could be photoshopped and it means nothing. He pulls out her engagement ring, the washer from her dad’s motorcycle. She refuses to believe it because she just crashed her dad’s cycle, which is how she ended up in the hospital. Ben explains that the crash was the beginning of their love story. 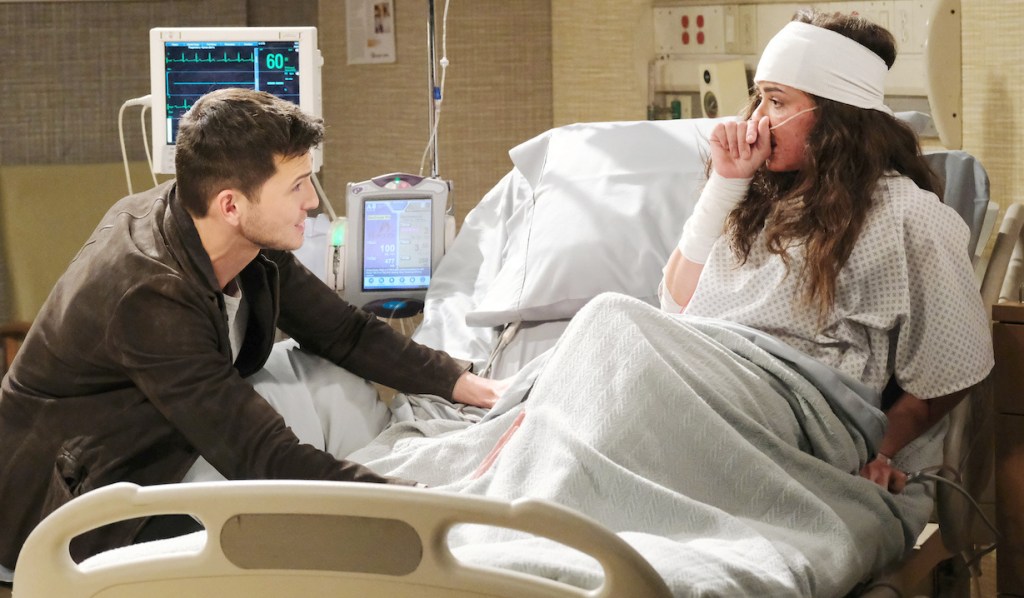 Ben begins to detail finding her after her accident. Flashbacks play out as he explains taking her to the cabin, and running through their history together. He believes deep down somewhere she remembers their love, but she coldly says she remembers nothing. He pulls out the Alice in Wonderland book, but it means nothing to her. He tries to explain how she was being held hostage, and their psychic connection, and this book is what led him to find her. She laughs and refuses to believe any of this. Roman enters as Ciara becomes upset with Ben and orders him out. Roman urges Ben to go, so he does. Ciara cries to her uncle that Ben has to be lying, but he confirms everything Ben said was true. She is confused and cries nothing makes sense. Roman thinks he should get Kayla for her.

Ben goes to the chapel to pray and begs God to help Ciara to remember.

In Horton Square, Claire is on the phone with her mom discussing Ciara when a stranger approaches claiming to have an emergency and needing help. The unknown lady asks where the Salem Inn is, and Claire points at it. The young woman runs off. 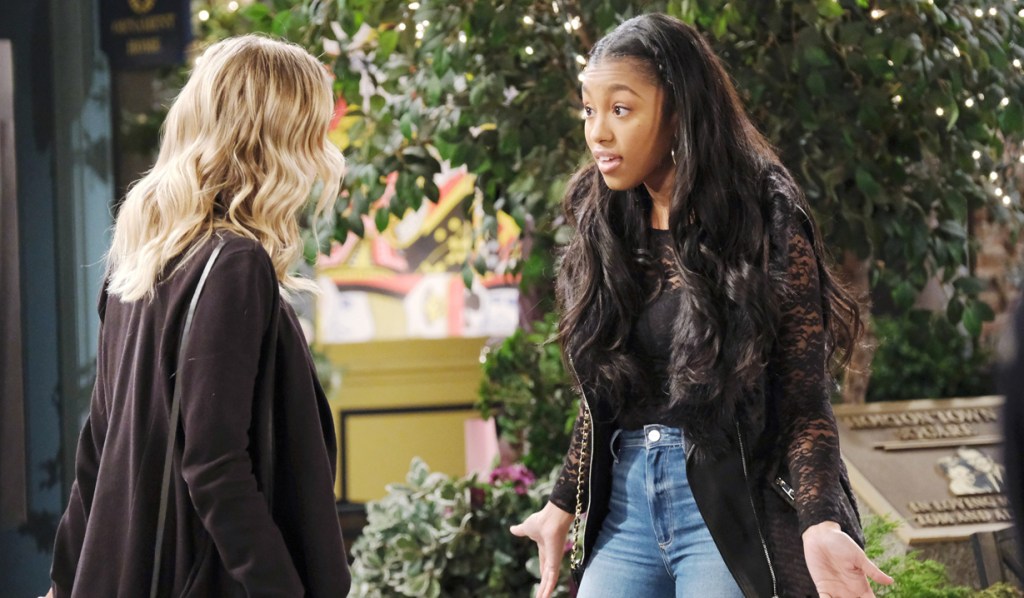 Later the woman returns and apologizes for interrupting Claire and gives her mad props on her outfit. However, she looks like she lost her best friend. Claire says she did, and it’s a long story. The woman asks if she can sit and join her, and Claire invites her. The woman is looking forward to a king-size bed, a whirlpool, and some champagne. Claire thinks it’s a bit early, and champagne is a bit pricy. The young woman says it’s on her, so Claire agrees she could use some liquid fun.

As the champagne is poured, the woman goes on and on about being in a car for two days from Miami to get there, and that she rarely stopped. Tripp interrupts to talk with Claire. Claire introduces Tripp and realizes she never got the young woman’s name. She introduces herself as Chanel and excuses herself to get more champagne. Tripp tells Claire that Roman filled him in on Ciara having no memory, and recalling finding them in bed together. Chanel returns as the talk turns juicy, and finds Salem might be a whole lot less boring than she thought it was be. Chanel wants all the details about this Ciara. 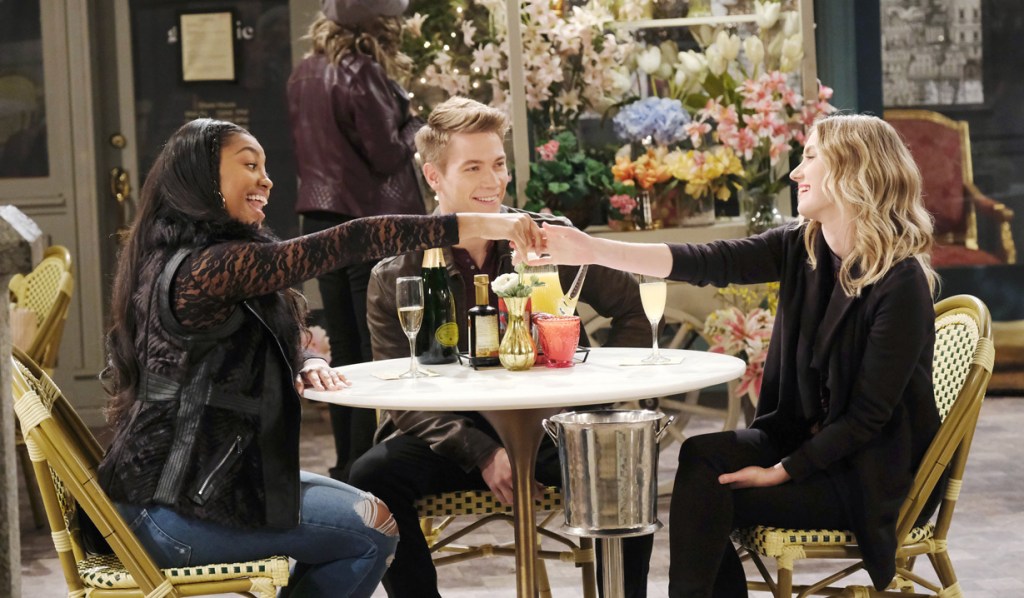 Eli, Lani and the others gather at Julie’s place, where Julie and Doug toast to their expanding family. Doug announces it is time to open the gifts, and Paulina wants to go first. She gives them a blank check, which is for the twins’ college tuition years from now. Lani says they can’t accept this, but Eli thinks they can. Paulina suggests Lani listen to her husband. Lani promises Paulina that they’ll discuss this in private later. As the party winds down, Lani and Eli decide to walk the twins home. Meanwhile, Paulina questions Julie about what is going on between Valerie and Abe. Julie explains they used to date, but Abe is single now.

Back out in the square, Claire tries to explain the complicated relationship between her, Ciara and Tripp, and how they patched things up before an explosion wiped Ciara’s memory. Chanel asks them who they are seeing now, and Claire goes into her dating Tripp’s half-brother Charlie, who ended up getting murdered. Chanel decides it’s getting late and has to bounce and asks Claire to handle the check. 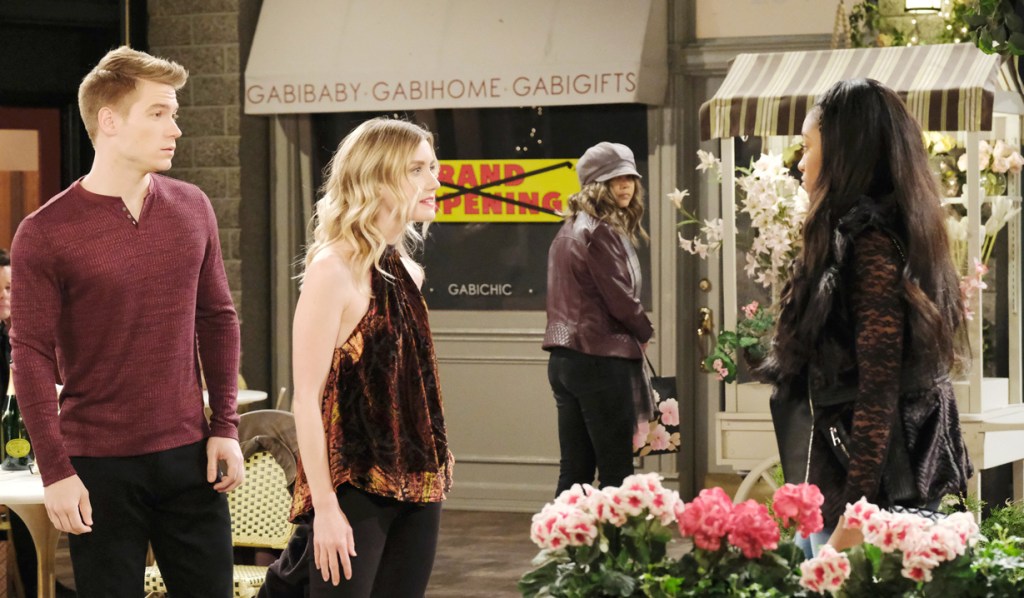 Claire scoffs that this was supposed to be her treat. Tripp offers to cover it, but Claire points out Chanel ordered five-hundred-dollar champagne and drank most of it. Claire demands Chanel put her money on the table and calls her a scam artist. As they argue, Eli interrupts. Claire explains this con artist is trying to stick them with her tab. When Chanel learns Eli is a cop, she claims there is a misunderstanding. Chanel swears she didn’t offer to pay, and Tripp admits he didn’t hear her offer. Lani arrives with the twins, followed by Paulina, both of who are surprised to see Chanel. Paulina announces that Chanel is her daughter. 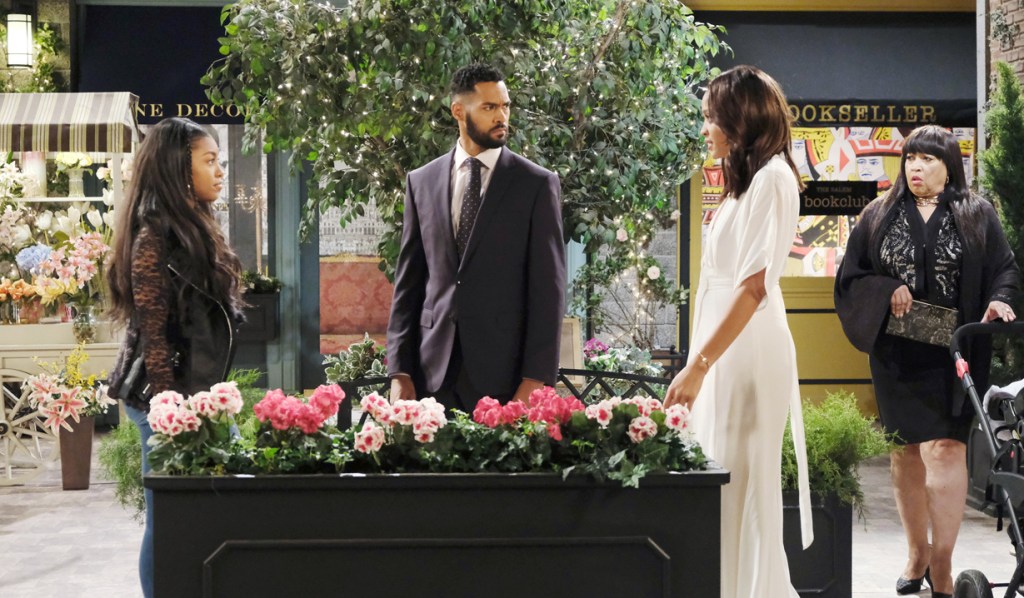 Back at the hospital, Ciara is alone in her room and looks at her wedding photo and can’t believe she’s married to a monster. Theo arrives to find her in tears and offers to help. She cries for him to hold her, which he does. 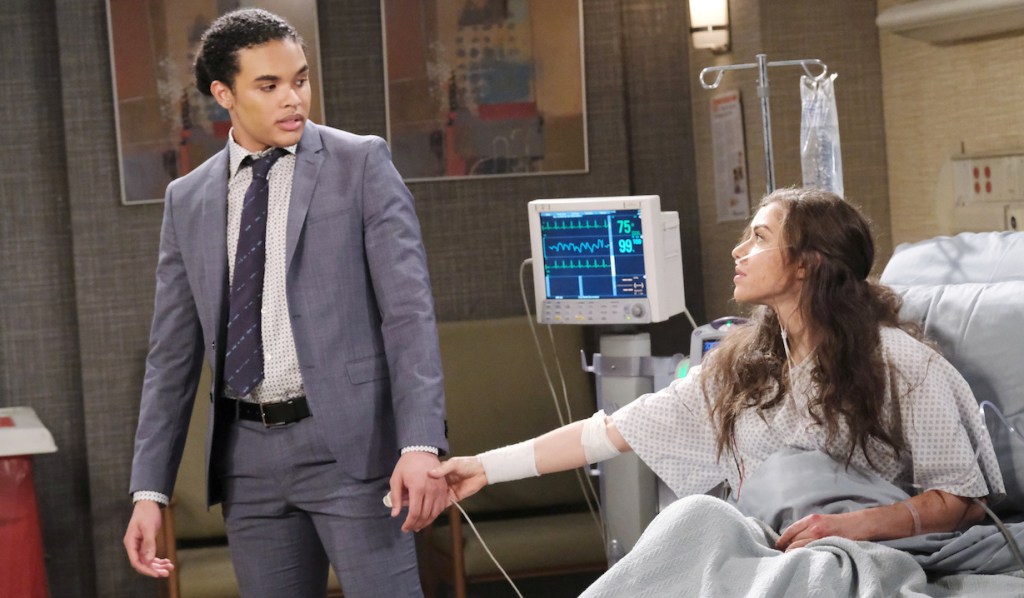 Next on Days of Our Lives: Xander lashes out at Roman.

Look through our photo gallery featuring the late soap vet Roscoe Born. Next, get your free daily soap-opera fix for Days of Our Lives — and all of the other daytime dramas — delivered straight to your email inbox by signing up for Soaps.com’s newsletter. 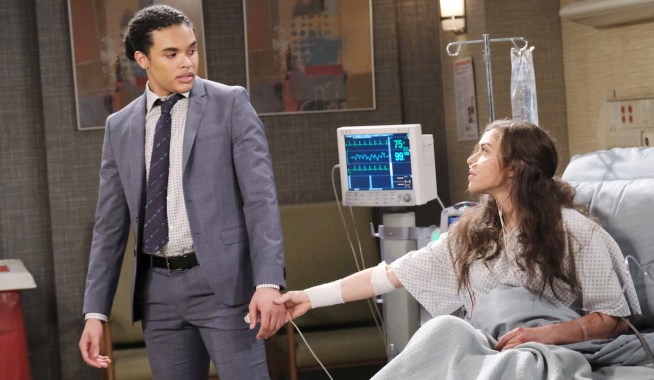 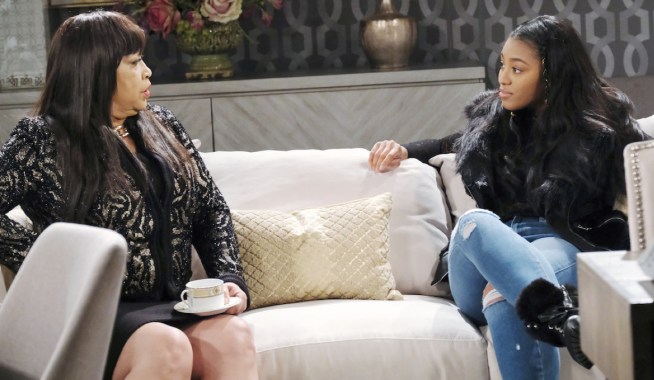