Thursday, February 11, 2021: Today on Days of Our Lives, Kate hopes to bust a longtime rival, nothing can stop Steve and Kayla's wedding, and Ciara dreams of being with her guy. 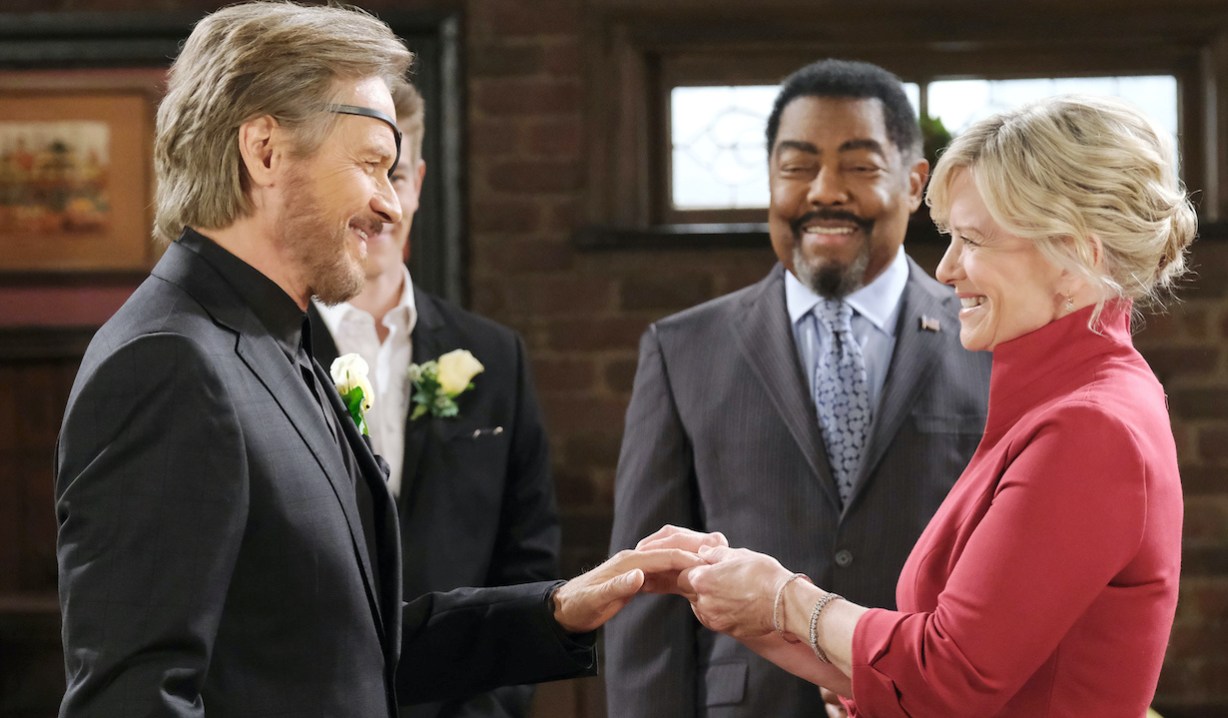 It’s Valentine’s Day in Salem, and love is in the air… especially for Steve, who wants nothing more than to surprise Kayla with the perfect wedding. But he realizes doing so might be wildly inappropriate given that word has just spread that Laura, a member of the town’s most prominent family, has died. Laura’s daughter, Jennifer, and her hubby, Jack, were supposed to be the best man and matron of honor at the wedding, after all, so it seems as if Steve’s big plan has been scuttled.

Things change, however, when Jack calls, urging his brother to go through with the ceremony. After all, it’s what Laura would have wanted. With Tripp ready to step into the role of best man, things seem ready to proceed… until another phone call reveals that Marlena — who was going to officiate (because she’s now the Carter Walton of Salem, a joke only Bold & Beautiful fans will get) — can’t attend. Why? She and John have food poisoning! (Wonder if it was that dish Claire and Ben showed up with the other day?) But yet again, the day is saved when Steve is able to call on Abe to make things official. 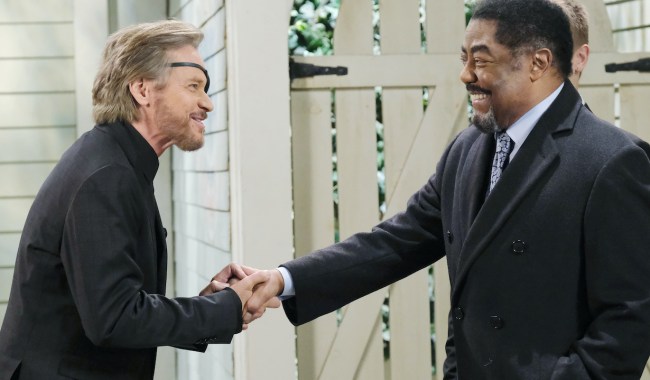 As the ceremony begins, Steve acknowledges that surprising his Sweetness with a wedding might not have been the smartest move, given that the last rough patch they hit came about because he made decisions for her rather than discussing things with her. But he knows he’d be lost without her and says despite all the trials and tribulations, she’s always been the only woman for him since the moment he laid eyes on her. In turn, Kayla, despite not having had time to prepare, speaks from her heart, telling Steve all the things she admires about him and saying that this, their fourth marriage, is the last time they’ll be doing it. As the ceremony wraps, Abe says that hey, they’ve been down this road before, they don’t need him to tell them what comes next. Having been pronounced man and wife, the happy couple share a kiss. 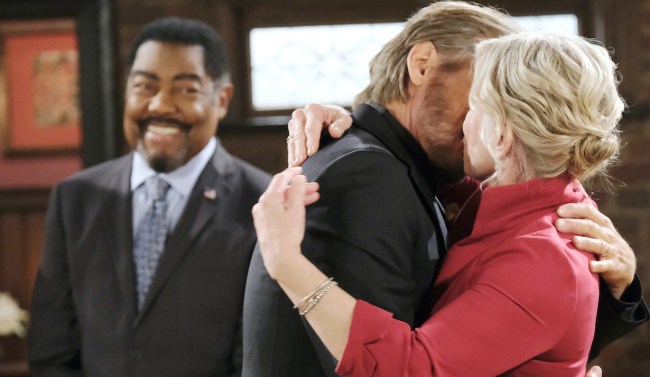 More: Passions star on why the show should return

Meanwhile, Jake and Kate are happy as two bugs all snug in a rug… until they find out that Vivian is alive. Jake immediately insists he needs to go see his back-from-the-dead mom, which obviously doesn’t sit well with Kate. But he’s going one way or the other, so she decides to tag along, if only to make sure Vivian doesn’t pull a fast one. As it turns out, that’s exactly what Viv appears to be doing, because under Eli’s questioning, she keeps insisting that the babies are actually her sons, Stefan and Jacob.

When the question of Vivian’s mental health comes up — could she maybe have snapped and gone ’round the proverbial bend? — Eli and Kate agree that it’s far more likely Jake’s mom is simply trying to fake everybody out in order to avoid being prosecuted. Rather than stick around to see how things play out, Eli heads home to be with his wife and kids. Lani is literally glowing and tells Eli that despite her fears about motherhood, Valerie gave her a lot of great pointers. When Lani asks how things went at the station, he doesn’t want to talk about Vivian, instead focusing all his attention on his happy, beautiful family. 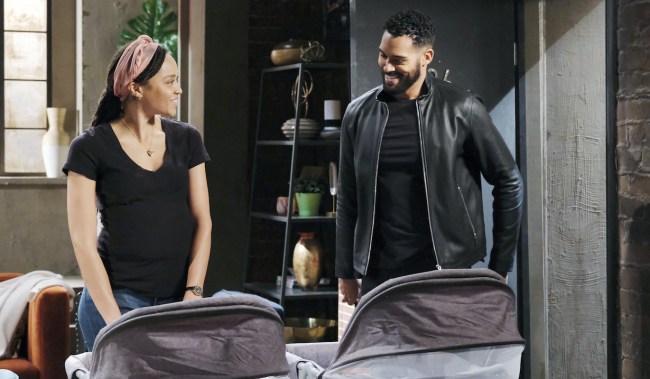 More: Robert Scott Wilson gets his groove on

Back at the police station, Kate enters and Vivian assumes (or at least claims to) that she’s there as her public defender. Smirking, Kate plays the ace she had tucked up her sleeve: Jake walks in, and Kate asks Vivian if she’s going to say hello to her son… 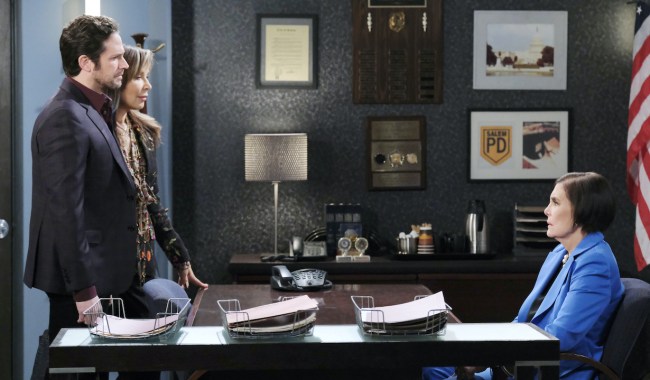 Still trapped in her glass cage, Ciara finds herself drifting off and dreaming about herself as Juliet and Ben as, of course, her handsome Romeo. But as anyone who knows that tale knows, it does not have a particularly happy ending. As things turn dark at the very end, Ciara jolts awake, reassuring herself it was just a dream. (If you missed out on the Ben/Ciara fantasy because of the hearings — or simply want to relive it — take a look at our special photo gallery capturing highlights of the scenes below.) 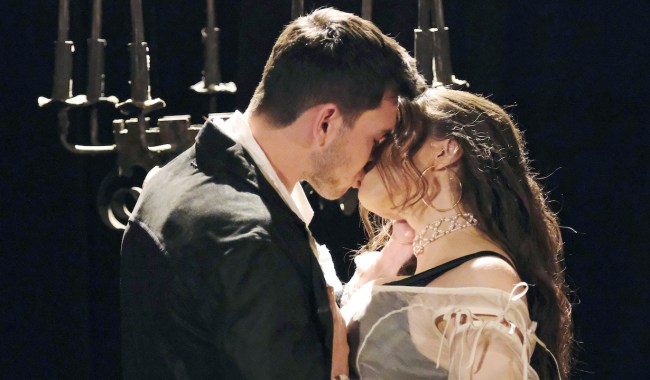 Next on Days of Our Lives: Ciara tries to connect with Ben and Charlie threatens Ava. 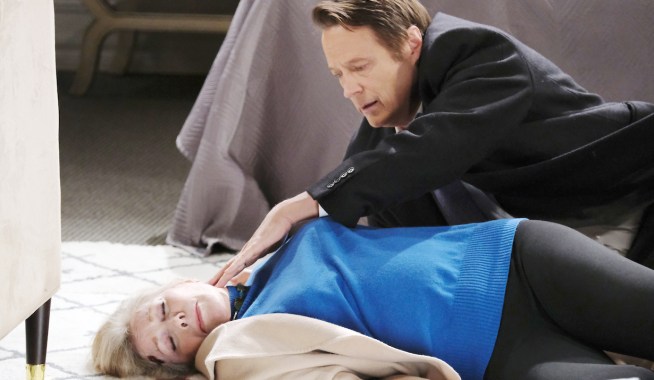 Kate Uses Jake to Bait Vivian, and Ciara Manages to Make a Call 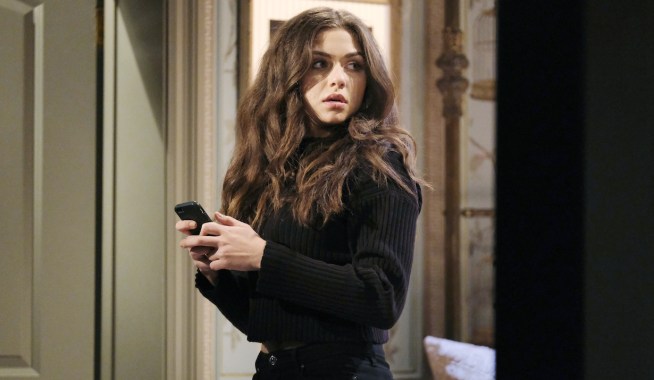