Monday, January 11, 2021: Today on Days of Our Lives, Brady offers Philip a deal, Tripp learns he has another brother, and Allie confronts Charlie. 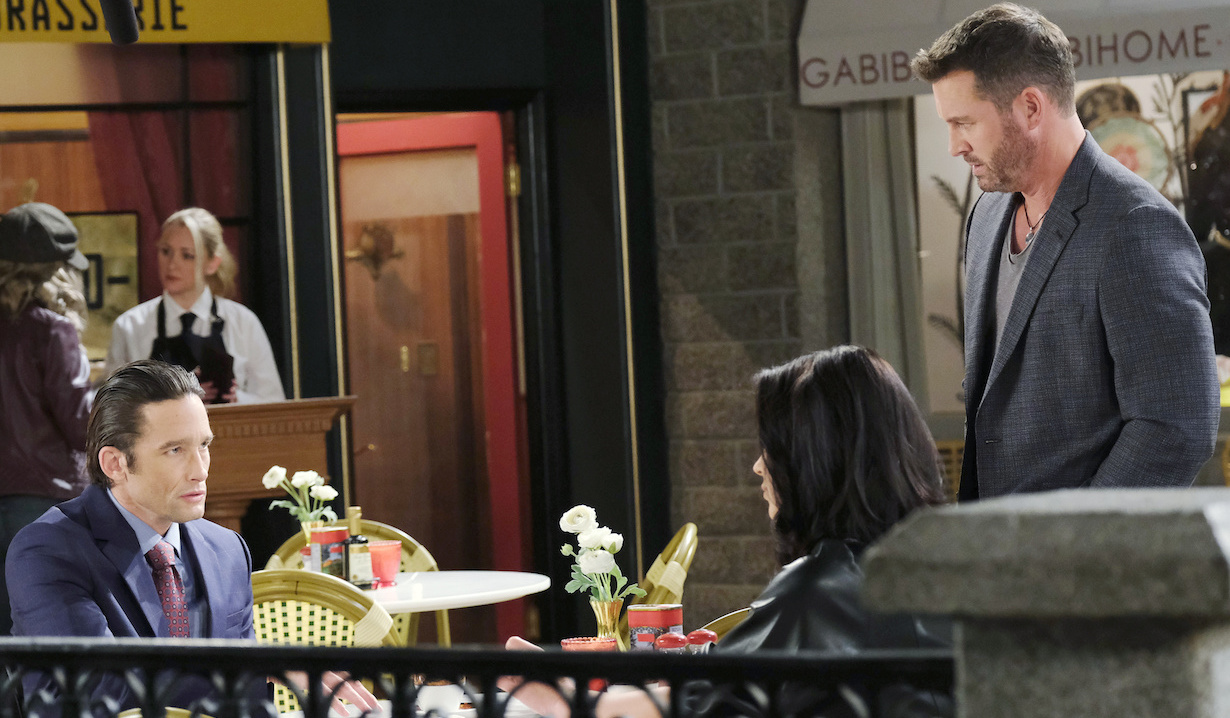 In the Square, Chloe tells Brady that Philip is laundering money for the mob and they need his help. Philip tries to deny it, but Chloe continues to make her case. Brady offers his help for Chloe’s and their family’s sake. Philip relents and tells Brady his story about his gambling debt and laundering money through Titan to pay it off. Chloe adds that Philip is working for Ava Vitali. Brady suggests getting Victor involved, but Philip doesn’t want to disappoint his father. When Chloe steps away to take a call from her mother, Brady agrees to try and help Philip if he stays away from Chloe. Philip asks if he’s going after Chloe again. Brady calls Philip toxic. He needs to stay away from Chloe to keep her safe. Philip agrees as she returns.

During dinner at Brady’s Pub, Nicole asks if Allie is starting to doubt Tripp’s guilt. Allie knows Tripp was in her London flat, but she’s starting to wonder if he wasn’t the one who held her down. She’s terrified by the thought of going through the healing process over again, but she doesn’t want Tripp to suffer if he’s not guilty. She tells Nicole about John’s theory, just as he calls. After hanging up, Allie relays her grandfather is stuck in traffic, but he wants to tell her everything he found out in Philadelphia in person. Allie doesn’t want to wait around for him though. Nicole offers to talk to Rafe to see what she can find out. They leave together. 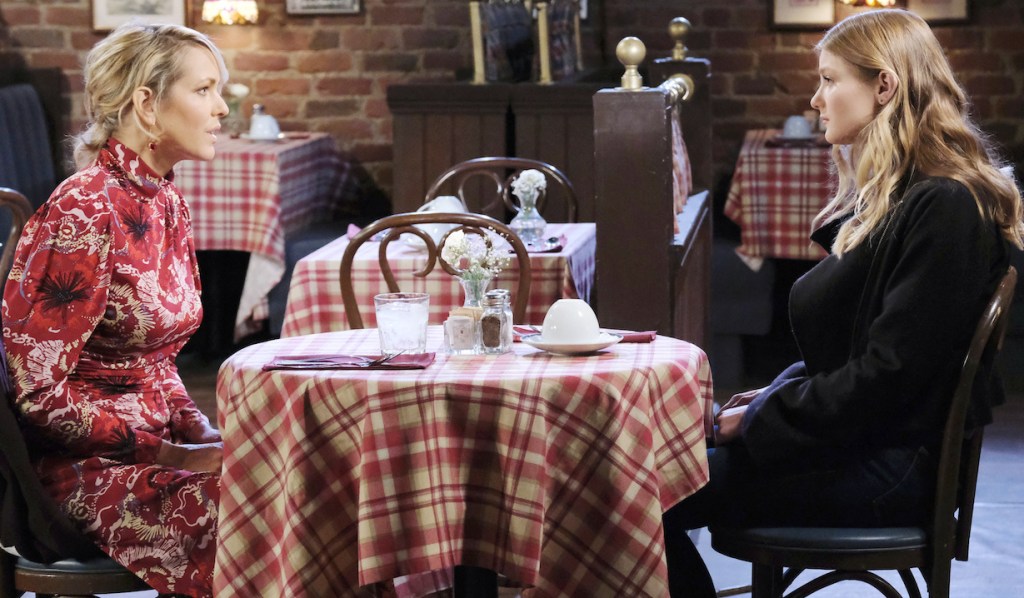 At the Salem police department, Rafe questions Charlie about Ava’s kidnapping. A very calm Charlie plays dumb, insisting he doesn’t even know who Ava is. Rafe counters that Ava is his mother and accuses him of raping Allie. When Rafe starts to leave to prepare for a DNA test, Charlie asks for a lawyer.

Nicole and Allie come to the police department. Rafe updates them about Ava being held captive, potentially by Charlie who may be her son. He adds that Charlie may also be the person who assaulted Allie. Nicole asks a stunned Allie if she saw him in London. Allie can’t place him, but he does remind her of Tripp. Nicole orders Rafe to make Charlie admit what he did to Allie — or else she will. Rafe prevents her from going in the interrogation room and promises to get them answers. Rafe leaves to question Ava at the hospital and Nicole goes with him. Though Allie says she’s going home and with Henry, she returns when the coast is clear. She enters the interrogation room and tells Charlie, “I’m not leaving until you tell me the truth.” 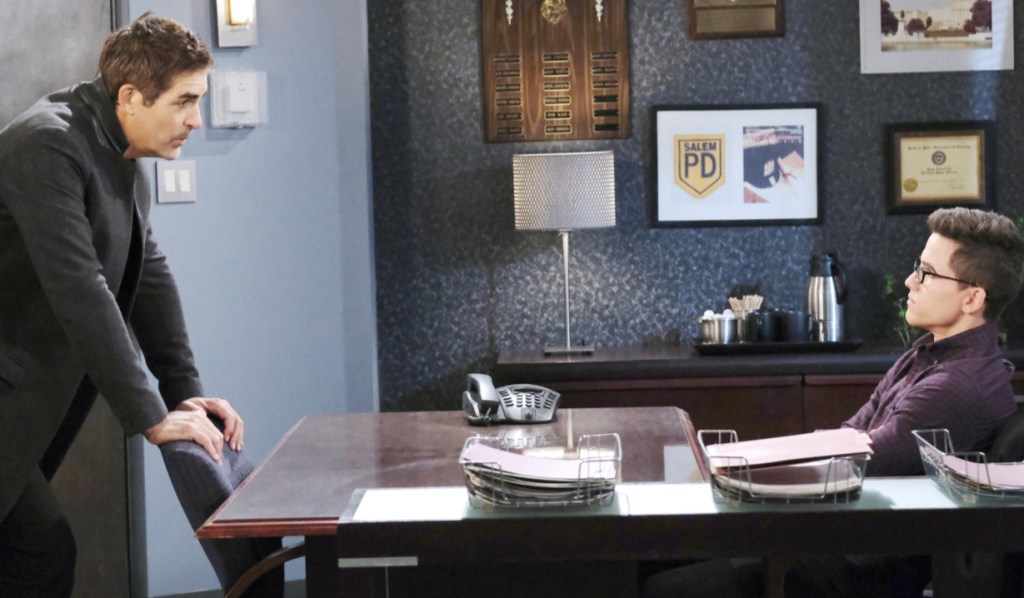 Kayla checks in on Ava in her hospital room. Ava demands to know where her son is. Kayla assures her Tripp wasn’t hurt. The attack wasn’t real. However, Kayla wants to know why her other son had her tied up. Ava admits Charlie is her son, but she really just needs to see for herself that Tripp is okay. Kayla can’t let her leave the hospital yet. When Ava grows more agitated, Kayla gives her a sedative to help her rest.

Steve comes to Tripp’s place to tell him he has another half-brother, who could have raped Allie. They’re not sure yet, but there’s a chance his brother is Claire’s boyfriend Charlie. Tripp reels, but wonders if Charlie has anything to do with Ava’s disappearance. Kayla calls Steve and tells him to bring Tripp to the hospital.

More: Ready for Ben and Claire in Days Soapbox

When Steve and Tripp show up to the hospital, Kayla tells them how confused and worked up Ava has been. She thinks Ava has had a break with reality, convinced something terrible happened to Tripp. Kayla allows Tripp to sit with his mother. After he walks away, Kayla fills Steve in about Rafe finding Ava tied up at Charlie’s and Steve tells Kayla what he learned about Charlie. Kayla hopes it’s all true, but worries Charlie could be extremely dangerous.

More: Vivian resurfaces in Salem with a new look

Ava wakes up in her room to see Tripp by her side. She becomes emotional seeing that her son isn’t hurt or dead. He asks her about Charlie. She’s sorry she didn’t tell him he has a brother, but she wanted to protect him. Tripp is the best part of her and Charlie is the worst. Tripp needs to hear everything about him anyway. Ava agrees to tell him and police everything about Charlie, as she sees a vision of him with a knife. Tripp tries to calm her down as she freaks out.

Next on Days of Our Lives: Ava recalls key information and Claire begs Charlie for the truth.

Look through our photo gallery below of the longest real-life marriages of daytime stars and then get your free daily soap-opera fix for Days of Our Lives — and all of the other daytime dramas — delivered straight to your email inbox by signing up for Soaps.com’s newsletter.

As Eli and Lani Frantically Search...