Steve Comes Up With a Theory About Allie’s Rapist, While Charlie’s in Danger of Getting Caught 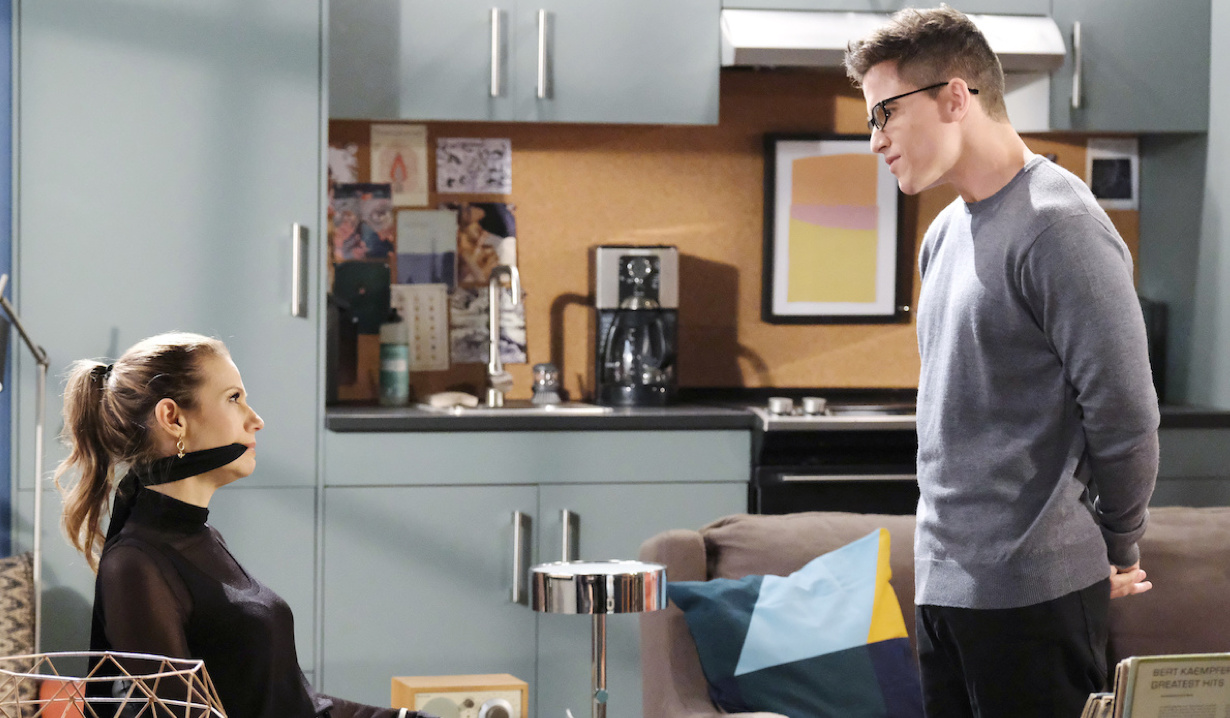 Marlena accepts a gift delivered at home. She tells John, wearing garland around his neck, that it’s a bottle of booze from Steve. John’s not interested. He rants about Steve defending Tripp, but Marlena urges her husband to have some empathy. Marlena reminds him their kids have done a lot of questionable things and they’ve stood by them. She thinks the gift is Steve’s way of bridging their divide. Marlena hopes John can accept that. 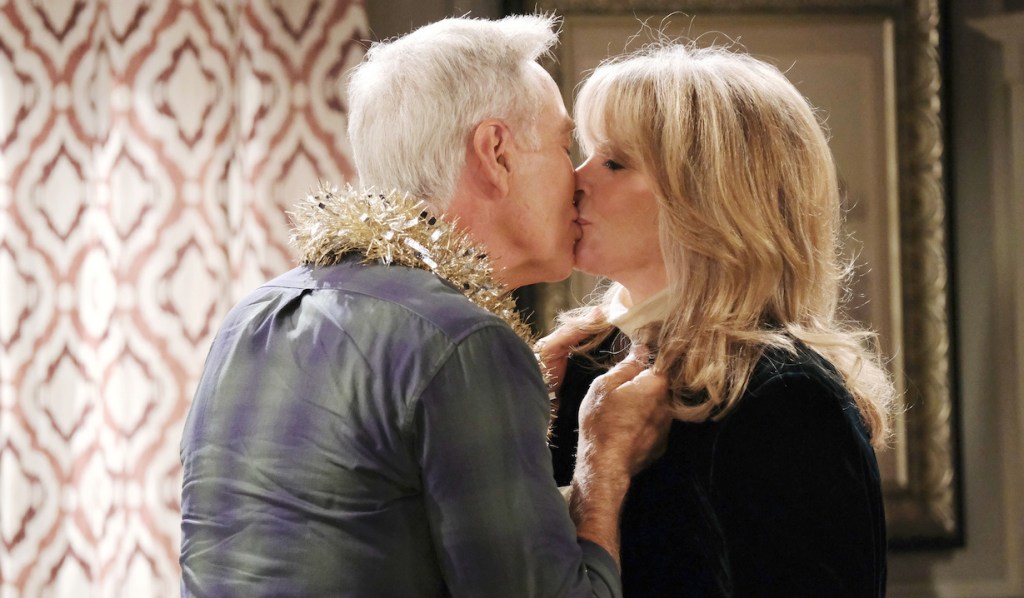 Steve comes to Kayla’s office at the hospital with yellow roses. After discussing their kids and their relationship, he reminds her he’s still working to clear Tripp’s name and he could use her help. He tells Kayla about his conversation with Allie and how she remembered a hand when she was attacked, not necessarily Tripp’s hand. He wonders if someone got into her apartment after Tripp left and he’s the one who assaulted her. Kayla reminds him of the DNA matches, but Steve thinks it could have been someone related to Tripp. A skeptical Kayla confirms that, hypothetically, someone who shares Tripp’s DNA could be Henry’s father.

More: Why you should watch Netflix’s newest soapy series 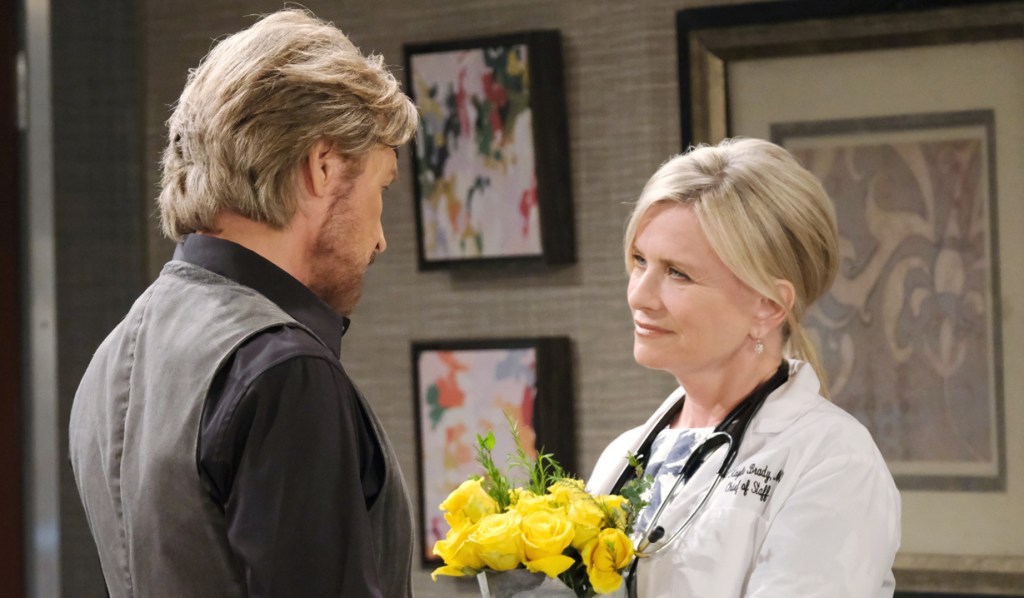 John arrives at Kayla’s office with the bottle Steve sent him. Kayla leaves them alone. When Steve assumes John is there to return his gift, John corrects him. He was hoping to have a drink with an old friend. 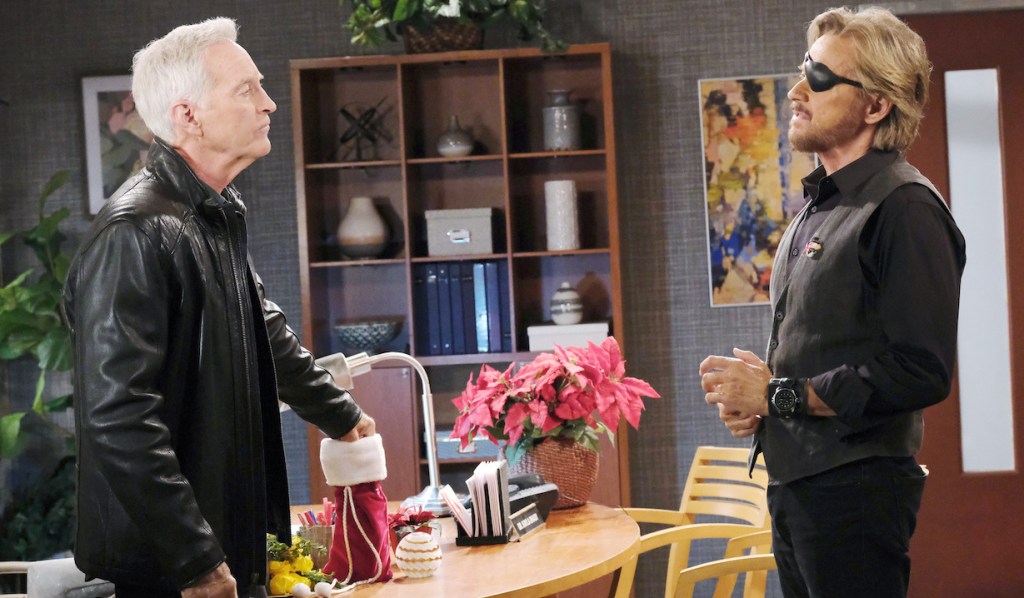 Allie visits Claire at home. She sees Charlie’s unopened gift for Claire. Claire asks what Allie thought of her new boyfriend. Allie says he’s definitely cute and that he feels really familiar. Claire thinks she’s just seen him around town. Allie suggests Claire open his gift, which are tickets to see one of her favorite bands on Valentine’s Day. Claire is thrilled. Allie encourages her to surprise Charlie at his place with her gift. Claire doesn’t know where he lives though. Allie suggests she get that information from Titan.

More: The year of soaps in photos 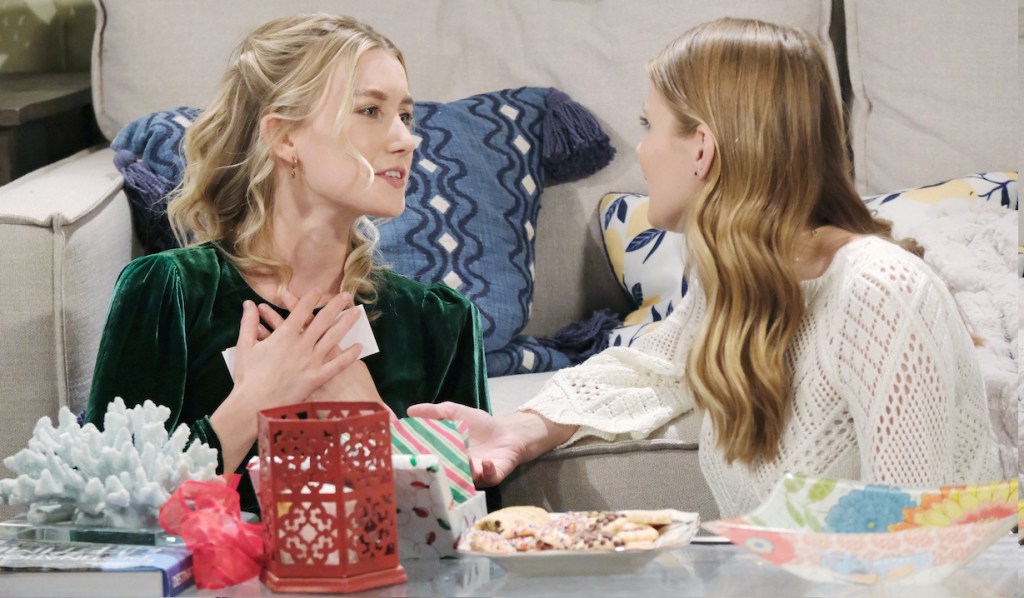 Allie stops by to see Marlena at home. Allie recounts her conversation with Sami about the rape and how Sami wished she could have taken her in her arms. A teary Allie wished that too. Marlena says, “I’m here,” and pulls her in close. 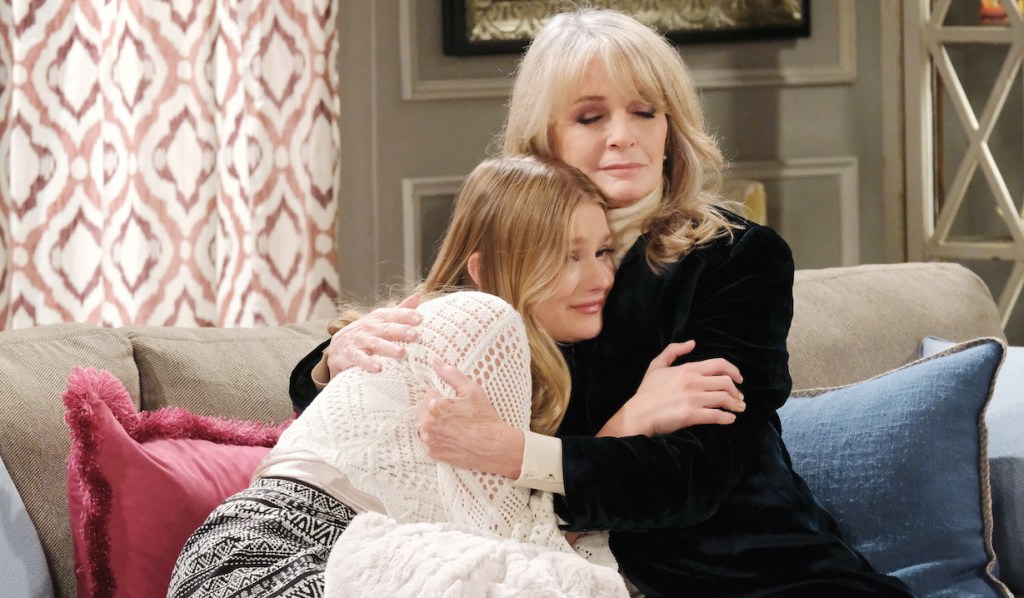 As Rafe goes over Ava’s file at the station, Nicole drops by. She brought the gloves he left at her place the night before. When Nicole notices Ava’s file, Rafe explains Tripp thinks she’s missing. However, Rafe thinks Ava just took off. Nicole questions that considering Ava was just starting to get to know her son. She suggests, in the spirit of Christmas, Rafe go to Ava’s to make sure everything is okay.

More: Why Ciara might need to stop “visiting” Ben 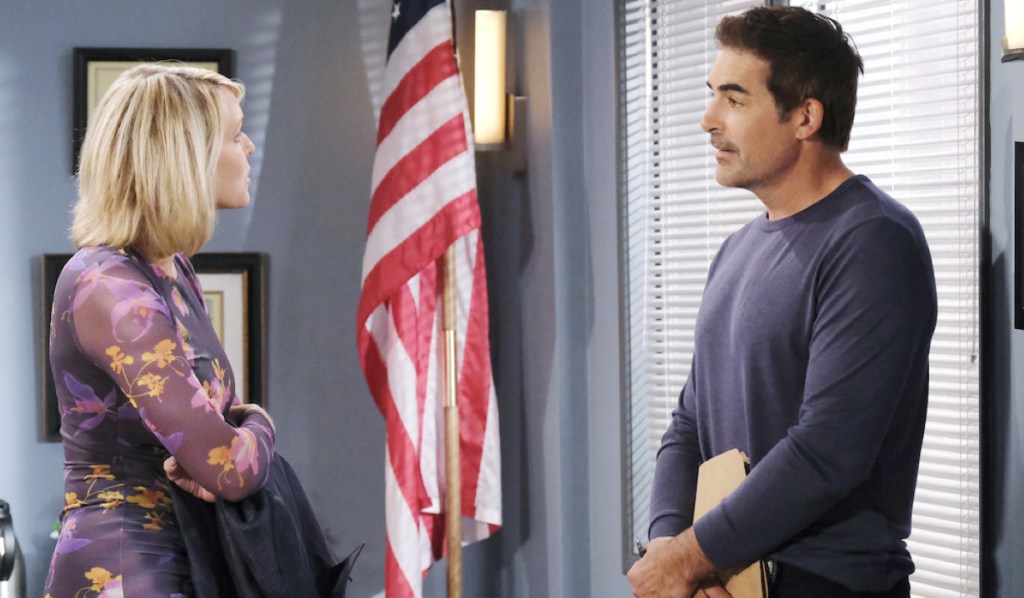 At home, Tripp urgently leaves a message for Ava to call him. He hears a knock at the door and opens it to Lucas, who wants him to pay for what he did to Allie. Tripp insists he didn’t rape her. Lucas says if he had a gun right now, he’d point it between Tripp’s legs and pull the trigger. Tripp says, “Your daughter already tried that.” When Tripp tells Lucas to leave, Lucas picks up a pair of scissors. One way or another he can make him pay. Rafe bursts in as Lucas lunges at Tripp. Rafe grabs the scissors out of Lucas’ hands. Lucas demands Rafe arrest Tripp. Rafe wishes he could, but reminds Lucas the rape didn’t happen in Salem. Rafe tells Lucas to leave.

Rafe and Lucas go to the police station to file a missing person’s report. 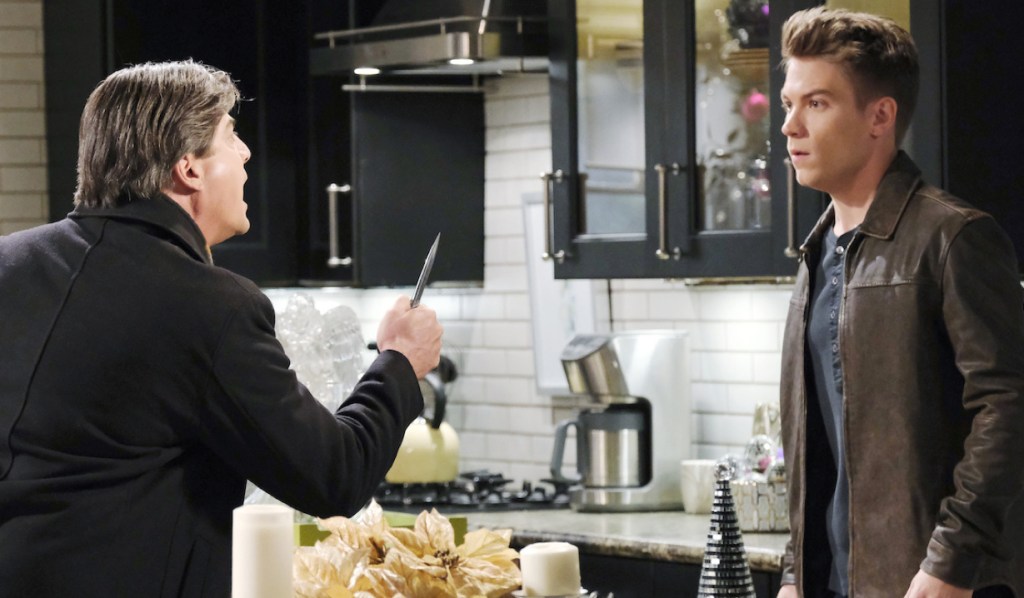 More: The All My Children reboot’s must-have characters

Charlie feeds a tied up Ava at his place. She calls the food terrible. He throws the dish reminding her he didn’t have a mom to teach him how to cook. Charlie gets a call, which he ignores. Ava asks if the call was from his new girlfriend, wondering if something happened between them. He tells her Allie was at Claire’s Christmas gathering, but she didn’t recognize him. However, she did feel like they met before. Ava thinks it’s only a matter of time before Allie remembers everything. She suggests the best thing for him is to get ahead of the situation and confess. Charlie starts ranting. He knows she doesn’t care about him — all she cares about it is what happens to Tripp. Ava reminds him Tripp isn’t guilty. Charlie says, “No one knows about that…except you.” He can’t let Ava go now when he’s so close to getting everything he wants with Claire. Charlie puts the gag back on a protesting Ava, as Claire knocks on the door.

Next on Days of Our Lives: Lucas wants to confess.

Refresh your memory of the year in Salem with the photo gallery below. If you haven’t yet, get your free daily soap-opera fix for Days of Our Lives — and all of the other daytime dramas — delivered straight to your email inbox by signing up for Soaps.com’s newsletter. 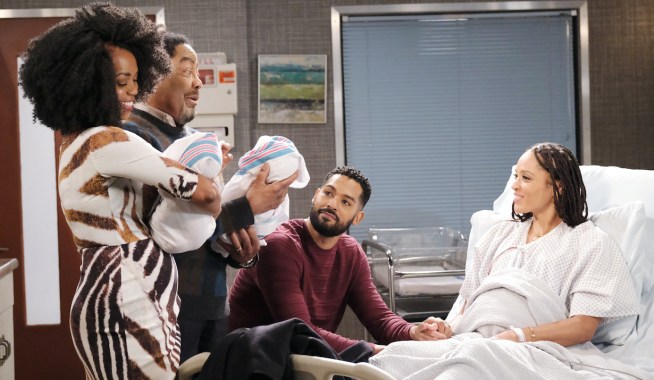 As Lani Gives Birth to Twins, Sami Finally Learns That Allie Was Raped

Lucas Is One Proud Papa, but Marlena Has a Different Reaction to Learning About Allie's Crime 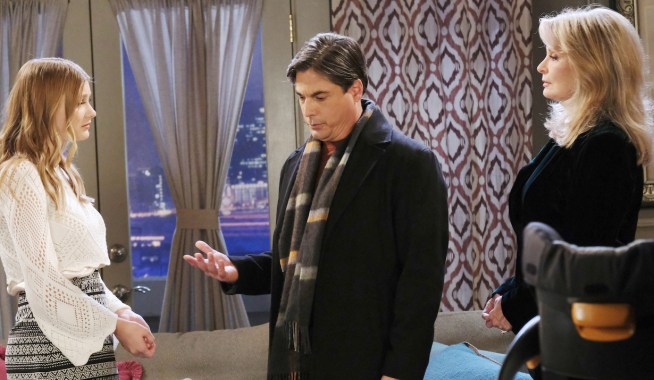