Wednesday, December 16, 2020: Today on Days of Our Lives, Ava has a decision to make, Tripp and Steve come to an understanding about Ava, and Chloe spills Philip's business. 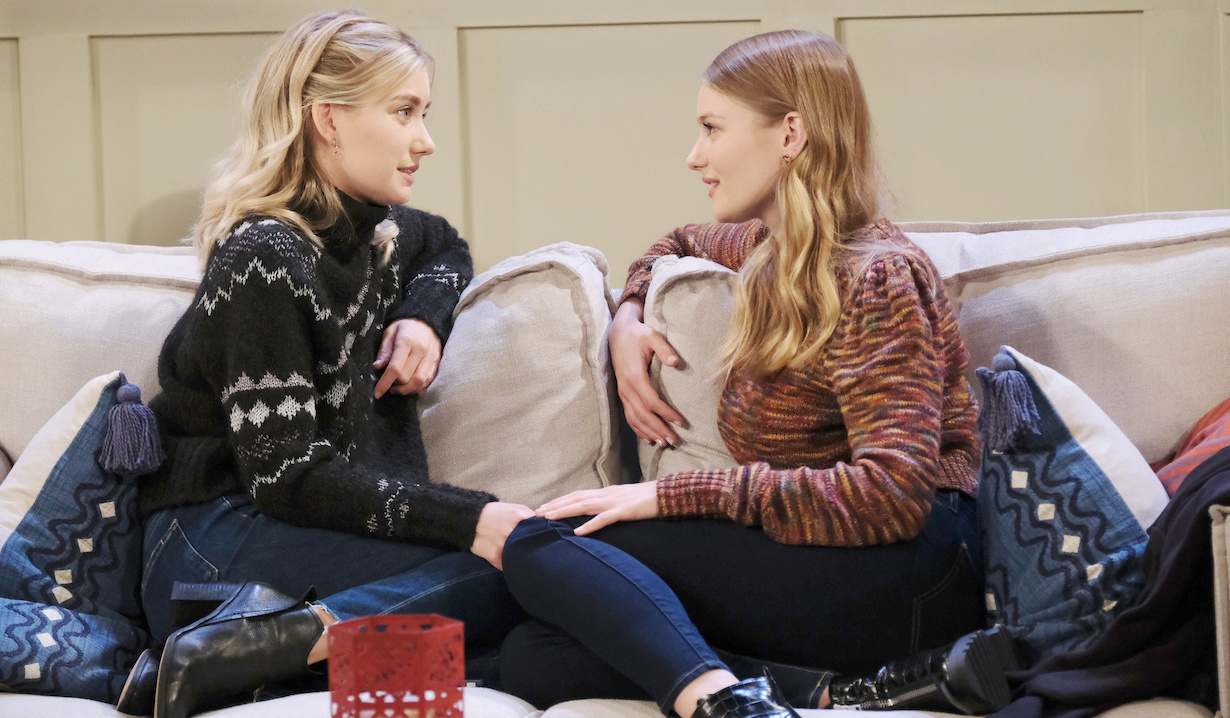 At home, Claire beams as she tells Allie about Charlie. She calls him sweet and funny and really cute. “I guess you could say he’s absolutely perfect,” she says. He makes her feel so safe and he cares about her family too — like when she told him about what happened to Allie. Allie doesn’t love that he knows she was raped. Claire apologizes for sharing her business, but she needed someone to talk to when she found out. Allie forgives her and they continue talking about how wonderful Charlie is. Allie says she deserves a nice guy and it sounds like she found him. Claire teases she’ll find out when she meets him at Christmas. Allie can’t wait. 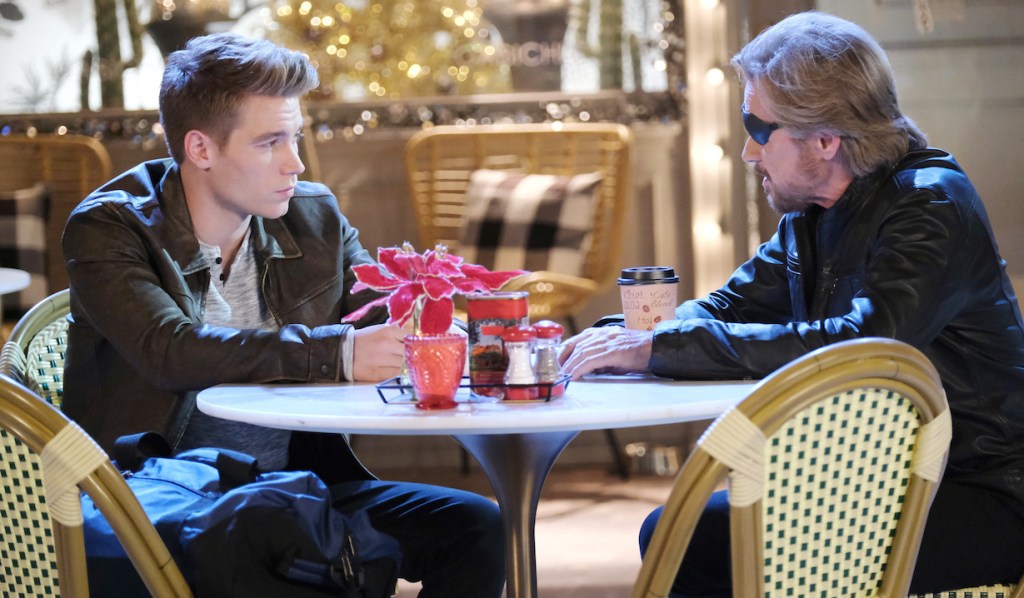 As Steve and Tripp walk through the Square, they talk about Tripp’s future. Steve thinks he’ll be a fine doctor someday and they’ll prove his innocence soon. Steve asks if they can get a coffee and talk about Ava. They sit at a table as Tripp explains he knows who Ava is, but he feels a compulsion to get close to her. Steve thinks it’s natural for him to want to know his mother. Tripp also thinks it could help him understand himself better too. It’s really important to him. He asks Steve not to try and talk him out of it. Steve just worries about him, pointing out Ava is a very damaged person. She’ll never be a normal mother. Tripp is confident he can handle her. He wants them to give her a chance and not expect the worst. Steve encourages Tripp to do that, but reminds him she still has ties to the mob. Steve wants him to promise to not underestimate what Ava is capable of. Tripp thanks Steve for looking out for him and leaves. Steve runs into Allie. He asks if they can talk. 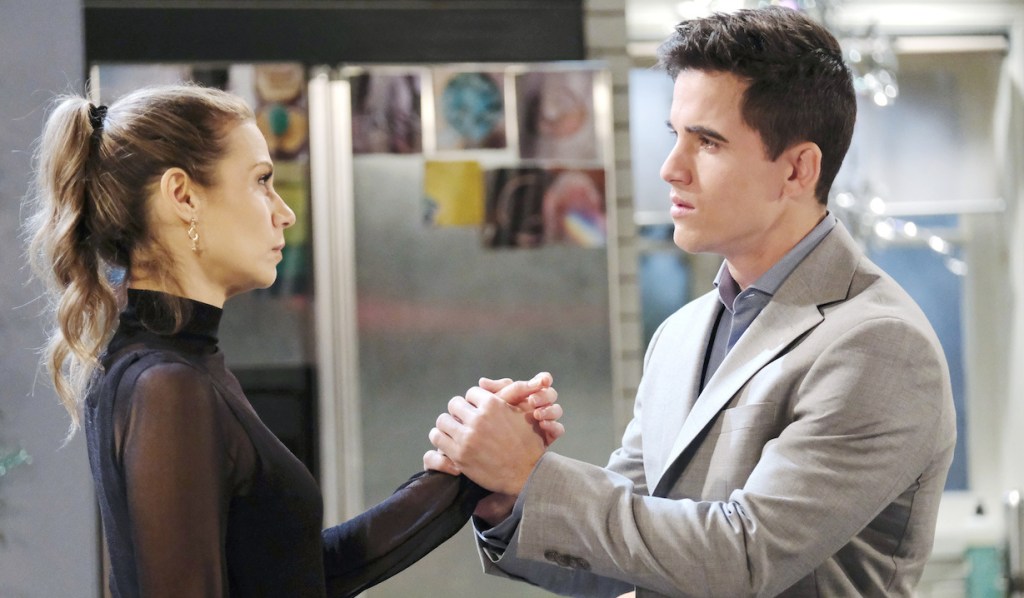 More: Charlie’s who we thought he was, what now?

Ava and Charlie argue about Tripp at her place. She calls them brothers, adding, “You are both my sons.” Steve might not be his father, but Charlie shares enough DNA with Tripp to confuse the paternity test. He continues to deny raping Allie, but Ava doesn’t let up on him. He rants about Ava believing Tripp over him because Tripp is Steve Johnson’s son. Charlie’s just the other one who comes running whenever she snaps her fingers. Ava insists she loves both her sons equally. A teary Charlie pushes her away, knowing she’s lying. All he ever wanted was a relationship with her. That’s why he came to work with her, but she sent him to follow Tripp. Ava orders him to admit that he raped Allie. He says, “Fine. I did it. I raped her.” Ava reels wondering how he could force himself on her. He insists he didn’t mean to hurt Allie. He made a mistake and feels awful about it. He begs his mother to believe him and not say anything to anyone. Ava won’t sacrifice Tripp’s reputation for him. She declares Tripp’s name needs to be cleared. Charlie says things are finally going his way and she can finally do the right thing for him. She owes him this. As he begs his mom to keep quiet about him, Tripp knocks on the door.

Chloe and Brady work late at Basic Black. Brady tells Chloe she did a great job on her first day. He thinks she has a knack for it. Chloe gets an alert about a snag regarding their silk order. Brady thinks he can reach out to Titan to rent one of their warehouses, but isn’t thrilled he’ll have to call Philip. Chloe remarks she ran into him and tells Brady about her and Philip’s recent attempt at dating. She also spills about Philip’s gambling debts.

More: Photos of Ciara’s life with and without Ben

Philip returns home to find Victor in the living room. Victor asks about his son’s new partner in crime, referring to Sarah. Philip tries to innocently play it off, but Victor knows he’s using Sarah to get to Xander. He orders him to stop feeling so threatened by his cousin. Philip declares he’s not threatened and Xander isn’t the reason he’s doing this. He’s there for Titan and to protect the family legacy. He’s about to tell him something else when Maggie enters with news about Ava being alive. Victor is glad they never had any dealings with her so they don’t have a target on their backs. After Maggie leaves, Victor asks what Philip was going to tell him. Philip just wants him to know he’s capable of carrying on the family business. Victor is thrilled to have him back where he belongs. He knows Titan is in Philip’s capable hands. A guilty-looking Philip thanks him.

Next on Days of Our Lives: Jennifer turns to Julie for help and Ava might be in over her head.

Look through the photo gallery below of what we’re most grateful for in Soaps. Then, get your free daily soap-opera fix for Days of Our Lives — and all of the other daytime dramas — delivered straight to your email inbox by signing up for Soaps.com’s newsletter. 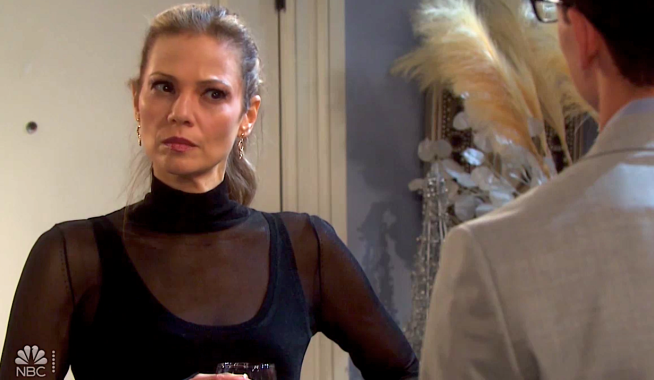 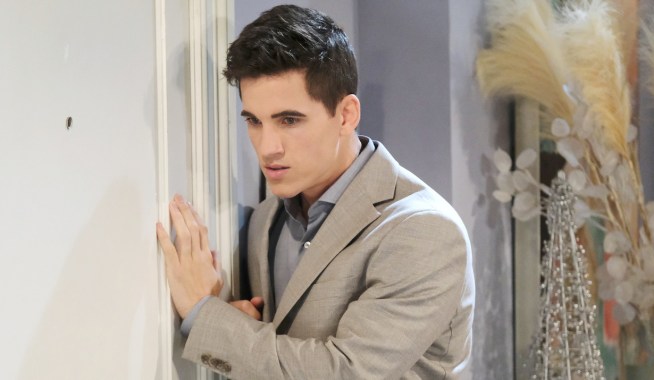