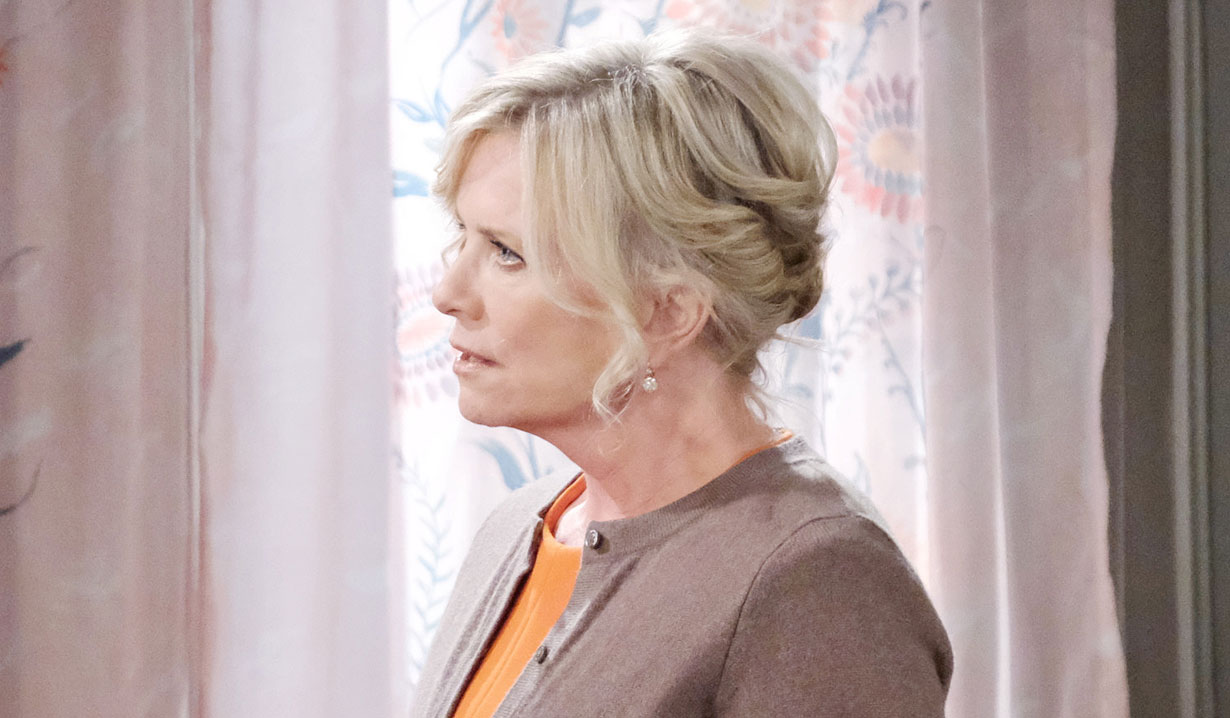 In a garden corner of the square, Gwen begins screaming at poinsettias and smashing them with a plastic bat until Jennifer interrupts. She wonders what she’s so mad about and wants to make sure her grandchildren are in good hands. Gwen assures her she’s never lost control in front of the children, adding that Jack and Abigail were there earlier and patched things up. She starts to vent about all the pain men cause and how they get away with it. Trying to laugh it off, Jennifer says a bat is not a bad idea. Seeing that she is really angry, Gwen begins to goad her about Jack and Kate. Handing her the bat, she tells her to pretend the flowers are Kate. Jennifer hits them. That makes her feel better, but maybe not enough to take Jack back. Gwen admits that she loves Jake but can’t trust him. Meanwhile, Nicole wheels the baby through the square when she runs into Tripp. She wishes he were in prison. After they bicker, the topic turns to his mother returning to the land of the living. She admits that she and Ava were close friends, but she still hates what she did to Steve and Kayla, even if she understands it. He’s impressed that she’s not judging his mother and wishes she would do the same for him. She won’t until he owns up to what he did. 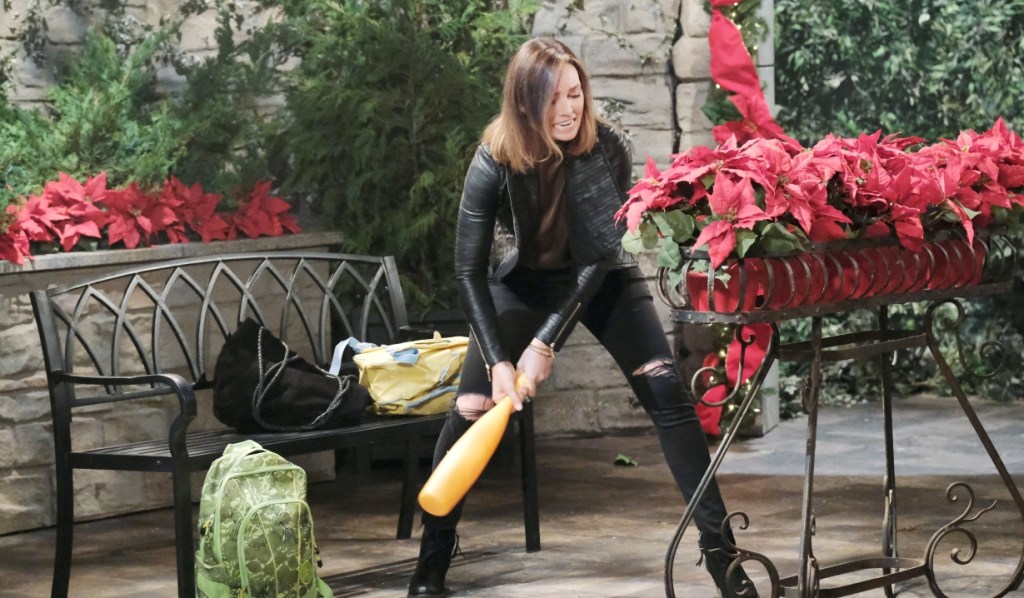 At Casa DiMera, Chad flatly asks Abigail if she’s having an affair with Jake. She wants to know where this is coming from. As she defends herself, she starts choking up. He reminds her it wouldn’t be the first time she slept with one of his brothers. That makes it worse. She turns it back on him as her father interrupts. After she takes off to see the kids, Chad tells Jack what they were fighting about and insists it was all his own fault. Jack is sure they can work it out and his daughter would never hurt Chad like he’s hurt Jennifer. Once Jack leaves, Abby returns and Chad apologizes. She can understand but she’s hurt and angry. After he walks out, Gwen pops up and tries to stifle a smile as she comforts her. 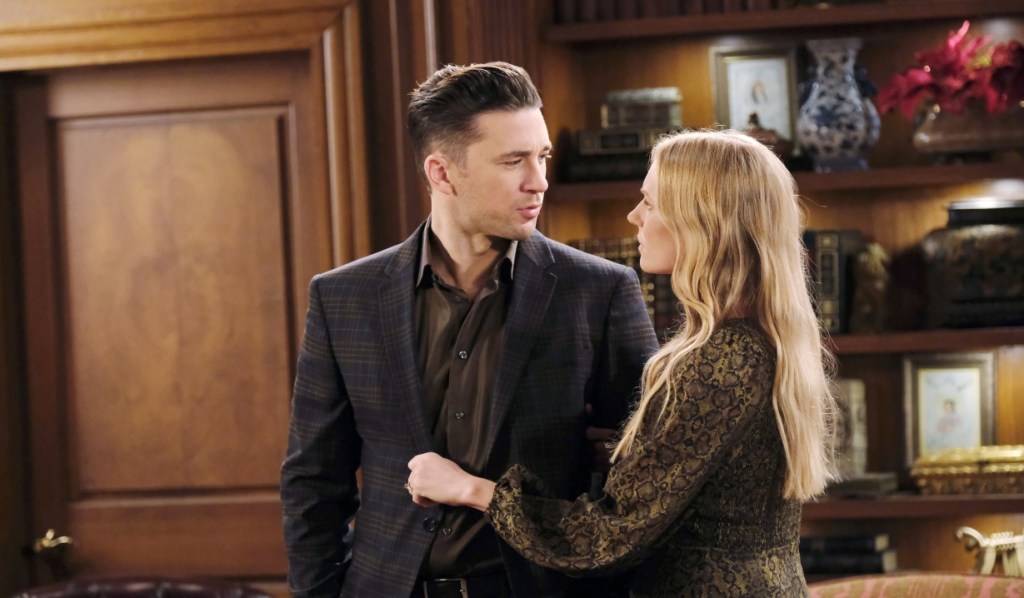 More: The anniversary of As the World Turns’ cancellation

Rafe drops by Nicole’s to see Allie. He explains that Abe filled him in. He wishes he’d been there to help. She says he’s always been her pocket of sanity. Allie admits she’s not doing great, especially since it looks like Tripp might get away with it. Rafe thinks that’s terrible but taking the law into her own hands was dangerous. Sitting down, he assures her he’s not going to arrest her now and will try to talk Tripp out of pressing charges. She admits that handling a situation like her mother was a bad idea. Pacing, she explains that Ava took the gun from her and threatened her, but Tripp talked her down. The cop asks her to call if she needs anything and assures her she’s not as crazy as Sami. As Rafe exits, he runs into Nicole in the hall

More: The twist that could save the Allie-Tripp story

Kayla gets home from surgery. Steve admits he didn’t get the chance to ask Tripp to move out. Ava comes out wearing only one of his shirts. He explains that Rolf kept her alive and Kayla realizes that Joey must be innocent. Ava complains about all the therapy she needed to come back to life. When the doctor lunges at her, Steve holds her back. Vitali points out that even though she’s alive, Joey did still try to kill her. In exchange for not pressing charges, she wants to be cleared of kidnapping. Ava takes off for a shower, leaving the doctor to vent about the situation. Her husband insists he only let her in for the sake of their family. She thinks this is a travesty. Tripp arrives as his mother comes out. Rafe shows up and arrests Ava on an outstanding warrant. As he cuffs her, Ava prompts Kayla to speak up.

Jack finds Jennifer in Julie’s Place. He makes a joke about cheating and then apologizes. She’s too annoyed to talk to him. Jack vows he won’t give up.

Next on Days of Our Lives: Jennifer suspects that Kate’s fling with Jack may not be over.

Check out other characters who have returned from the grave in the photo gallery below and then get your free daily soap-opera fix for Days of Our Lives — and all of the other daytime dramas — delivered straight to your email inbox by signing up for Soaps.com’s newsletter.

<p>Sheila Carter was presumed dead twice on Young and Restless and both times turned up back on Bold and Beautiful to wreak havoc. She’s disappeared and had plastic surgery as well…but always comes back one way or another.</p>

<p>Taylor Hayes was presumed dead on Bold and Beautiful in 1994 following a plane crash but was living with Prince Omar amid amnesia. She was believed to have perished again in 2002 when she died in Ridge Forrester’s arms after being shot by Sheila Carter, but later returned to shock her family and love, Ridge Forrester once again.</p>

<p>Stefano DiMera is notorious for dying and coming back to life repeatedly. He is truly the phoenix that rises from the ashes. One time, we even saw his decayed corpse, yet Stefano came back to life until Hope Brady shot him in the chest three times in 2016 and he was supposedly truly dead. Even then, he managed to return in a matter of speaking when Rolf downloaded his memories into Steve Johnson as “Stevano.” </p>

<p>Jack Deveraux has been presumed dead three times, once at the hands of the Salem Stalker, once in the jungle, and following an elevator fall. He’s also disappeared a few times, but his lady love Jennifer Horton always ends up back in his arms.</p>

<p>Like any good soap opera villainess, Helena Cassadine just keeps coming back to torment her adversaries. Many have attempts were made to kill her, and she was presumed dead but still alive after Luke Spencer shot her and again after the Crichton-Clark clinic explosion. Given that she’s currently ‘dead’ but has appeared in hallucinations, it’s high time <a href="https://soaps.sheknows.com/wp-admin/_wp_link_placeholder">Helena returns again</a>!</p>

<p>Cesar Faison, in typical soap villain fashion, has come and gone repeatedly despite dying…twice. Both times, Faison was believed to have perished in boat explosions, yet he rose again only to wreak havoc in disguise.</p>

<p>Young and Restless mogul Victor Newman Victor has ‘died’ four times. Twice he was presumed dead, once he was declared dead but was actually in hiding, and once he faked his own death.</p>

<p>Like father, like son. Adam Newman was believed to be dead after a confrontation in a car with Billy Abbott led to a wreck and fiery explosion, however, he turned up again with a new name and face. After his real identity became known and he reclaimed his life, Adam was presumed dead again following a cabin explosion. He was later found alive and going by the name Spyder in Las Vegas.</p>

Jennifer Is Shocked To Find an...

Tripp Is Hurt by Steve’s...

Dr. Dre Seen With Mystery Woman In 1st Pic After Being Ordered To Pay Ex Nicole Young $300K A Month

Bill Maher Says Tokyo Olympics Are Out-“Woke”-Ing The Oscars, Proving Cancel Culture Is “An Insanity That Is Swallowing Up The World”