Friday, December 4, 2020: Today on Days of Our Lives, Steve gives Kayla what she needs, Sarah gets the goods, and Ava's secret is out. 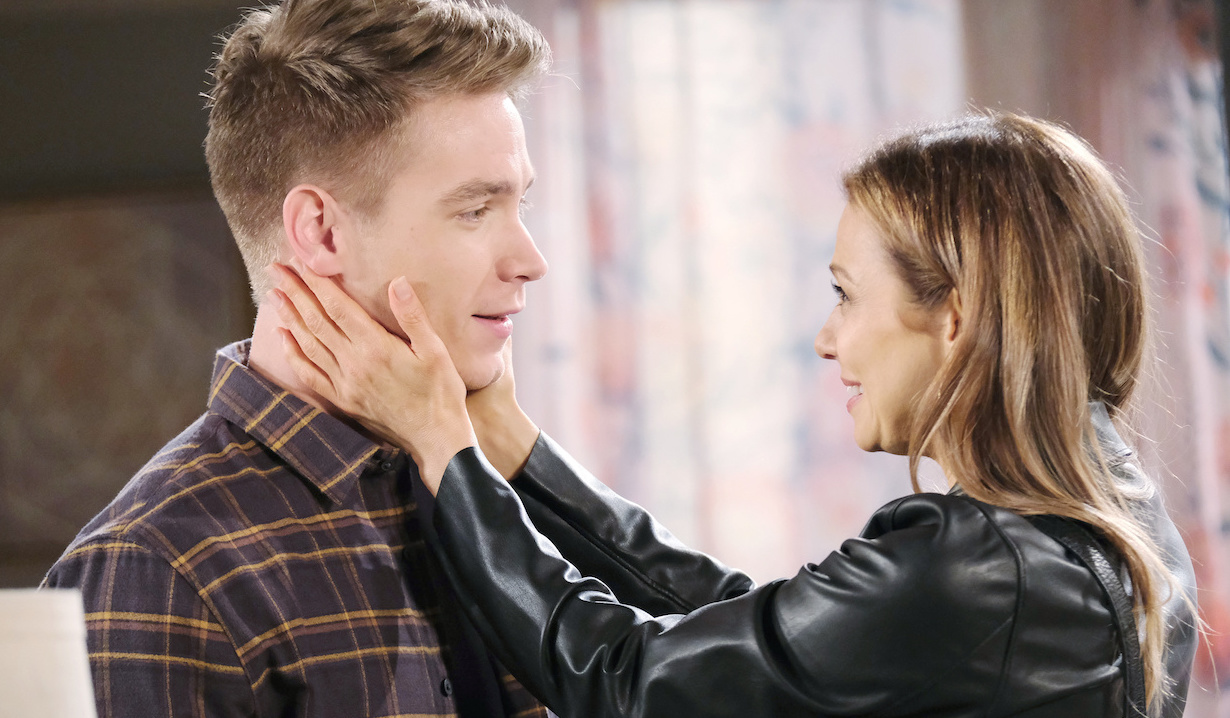 From home, Sarah calls Xander, who is walking through the Square. Sarah says she misses him, but he reminds her they’re supposed to hate each other for Philip’s benefit. Philip walks into the Kiriakis living room so Sarah starts yelling at Xander. After Sarah hangs up, Philip bad mouths Xander, but assumes they’ll make-up. Sarah counters that she might finally be seeing who Xander really is. When Philip says he has to go to the office, she convinces him to work from home so he doesn’t have to run into Xander. Phillip leaves his briefcase on the desk when he steps out to leave a message for Ava. Meanwhile, Sarah gets Philip’s laptop out of his briefcase and downloads files to a flash drive, while typing out a quick to-do list. Philip returns with snacks for them and shouts, “What are you doing on my laptop?” Sarah palms the flash drive and says she was just organizing things for the charity. She shows him her list and he’s impressed. He gets a message calling him back to the office. She looks at the flash drive and smiles after he leaves.

More: Hallmark’s 2021 Winterfest schedule is out 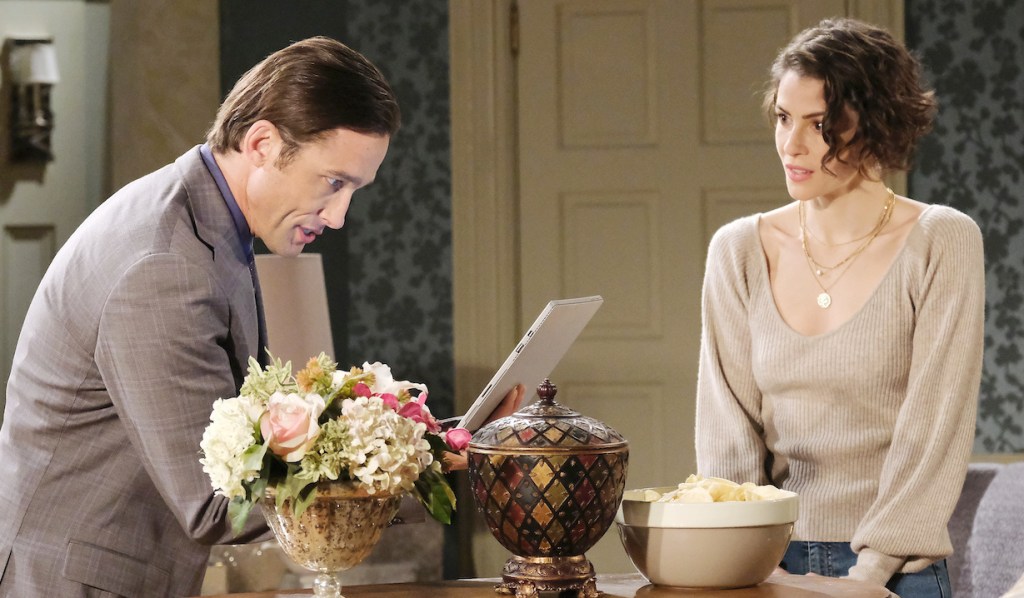 When Xander hangs up from Sarah in the Square, he smirks and says, “That’s the way to sell it, Sweetheart.” He bumps into Maggie and tells her he’s moving into the hotel because he and Sarah broke up. She doesn’t think that makes sense. Xander gives her the cover story about Sarah choosing Philip over him. Maggie tells Xander he’s in the wrong, but offers to talk to Sarah for him if he wants her to. Later, Sarah shows up as Xander unpacks in his hotel room. She shows him the flash drive.

At the hospital, Kayla and Steve argue over Tripp moving out. Steve wants to remain supportive of his son, but Kayla can only see a rapist when she looks at him. She’s heartbroken over this. It’s painful for her too. Steve wonders how he’s supposed to abandon his son after assuring him he would support him. She hates putting him in this position, but she wouldn’t ask if there was any other way. Steve knows he’s being stubborn trying to force the situation. He’s put her through a lot over the years, but she’s never asked much of him. He agrees to give her what she needs. Tripp will be gone by the time she gets home. 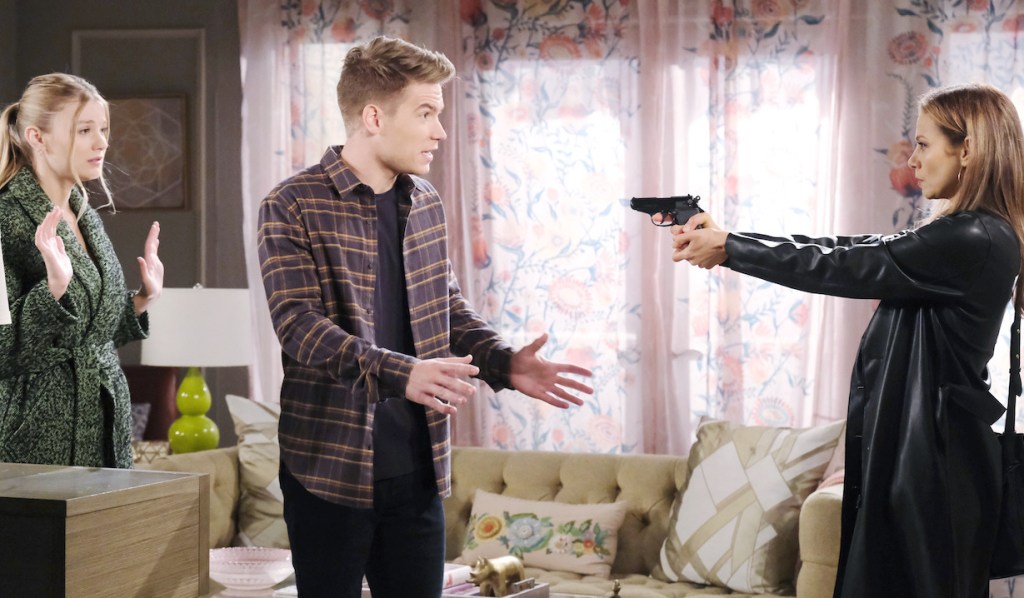 After Ava disarms Allie at Kayla and Steve’s place, she points the gun at Allie. A stunned Tripp stands in front of Allie, pleading with Ava not to shoot her. He points out Ava could go to jail. He doesn’t want to lose her again. Ava lowers the gun and warns Allie not to harass Tripp again. Allie agrees, but asks for the gun back because it’s her grandma’s. Ava tells her to get the hell out of there and pockets it. Allie rushes out, leaving Tripp and Ava to embrace. Tripp wonders how Ava’s alive. She explains she was brought back from the brink of death by Rolf. She wanted to find him, but she couldn’t risk getting caught. She knows she can’t go public, but she’s glad he knows she’s alive. Tripp isn’t sure he can keep this a secret, especially since Joey is in prison for killing her. Ava has no sympathy for the man who tried to kill her. She says the only way they can reconnect is if he keeps her secret. Tripp reminds her Allie knows, but Ava doesn’t think Allie will go to the cops because she herself was committing a crime. Tripp agrees, but he has to tell his dad, who has stayed loyal to him. Steve bursts in, shocked to see Ava.

More: What’s next for Gabi and Jake? 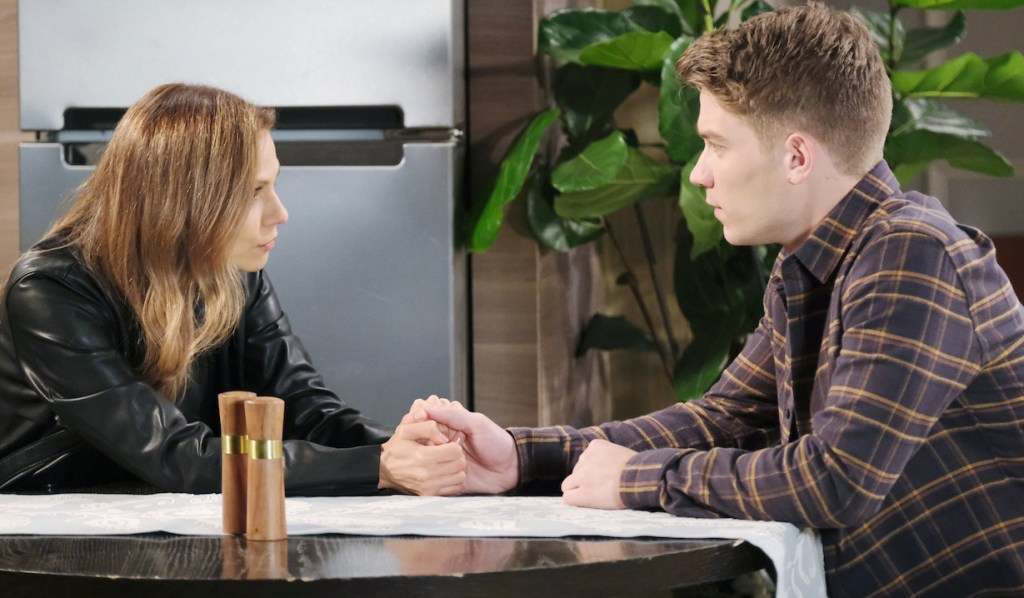 Brady and Chloe are surprised to see each other at Nicole’s place. They’re even more surprised to learn they’ll all be working together. After they all catch up, Chloe says she needs to get to the Salem Inn to unpack. She asks Brady for a ride. After they leave, Allie rushes back home. She breathlessly tells Nicole about pulling a gun on Tripp and how Tripp’s mom stopped her from shooting him. Nicole thinks that’s impossible — Ava Vitali is dead. Allie says, “Not anymore.”

More:The Allie/Tripp twist that could change everything 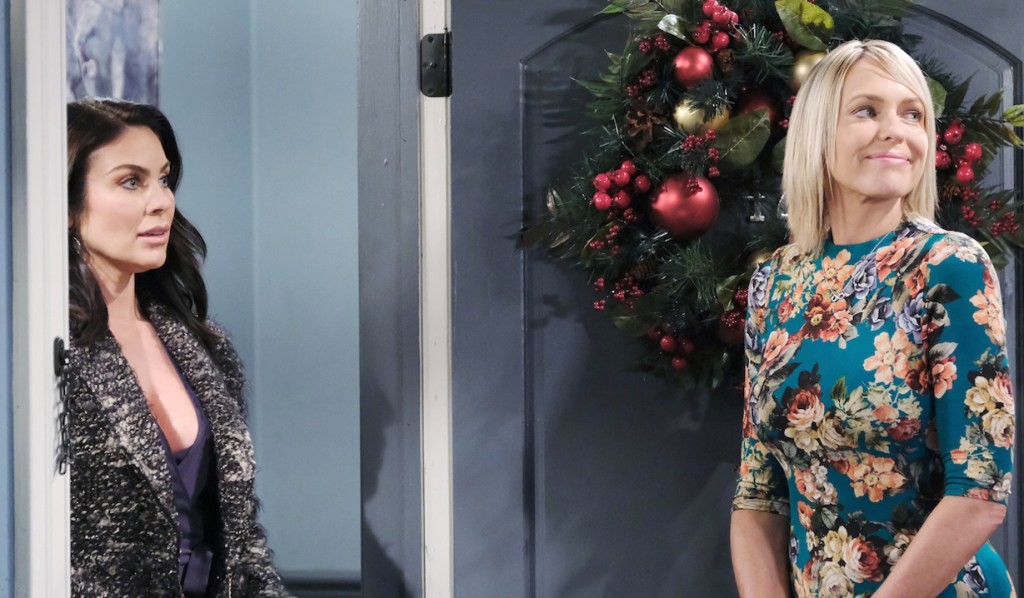 Brady walks Chloe to the hotel. They talk about their kids and Chloe explains she left Parker in New York with her parents. Brady wonders if anyone else will be missing her, like a man? She says she and Philip kind of reconnected, but it didn’t work out. He tells her Philip is back in Salem and battling Xander for Titan. After Brady leaves, Chloe sees Philip walking through the Square.

Next on Days of Our Lives: Ava wants to negotiate.

Soap scandals don’t just happen onscreen. Take a look through our photo gallery of backstage scandals below and then get your free daily soap-opera fix for Days of Our Lives — and all of the other daytime dramas — delivered straight to your email inbox by signing up for Soaps.com’s newsletter. 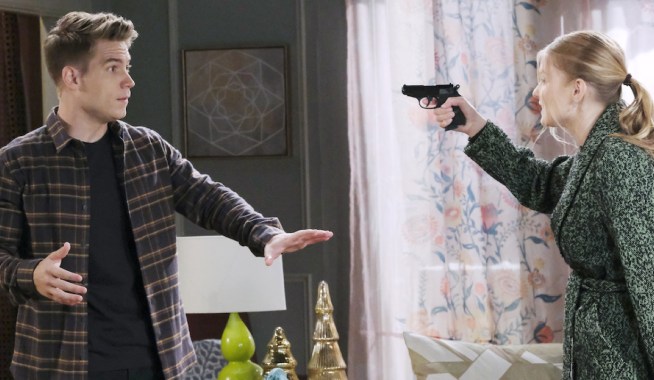 Ava Makes Steve an Offer That Only Kayla Can Accept 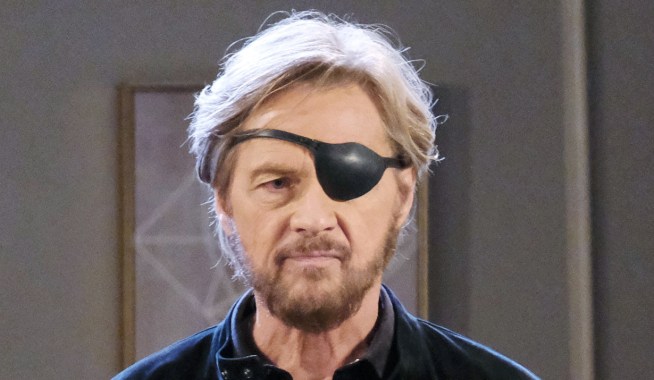