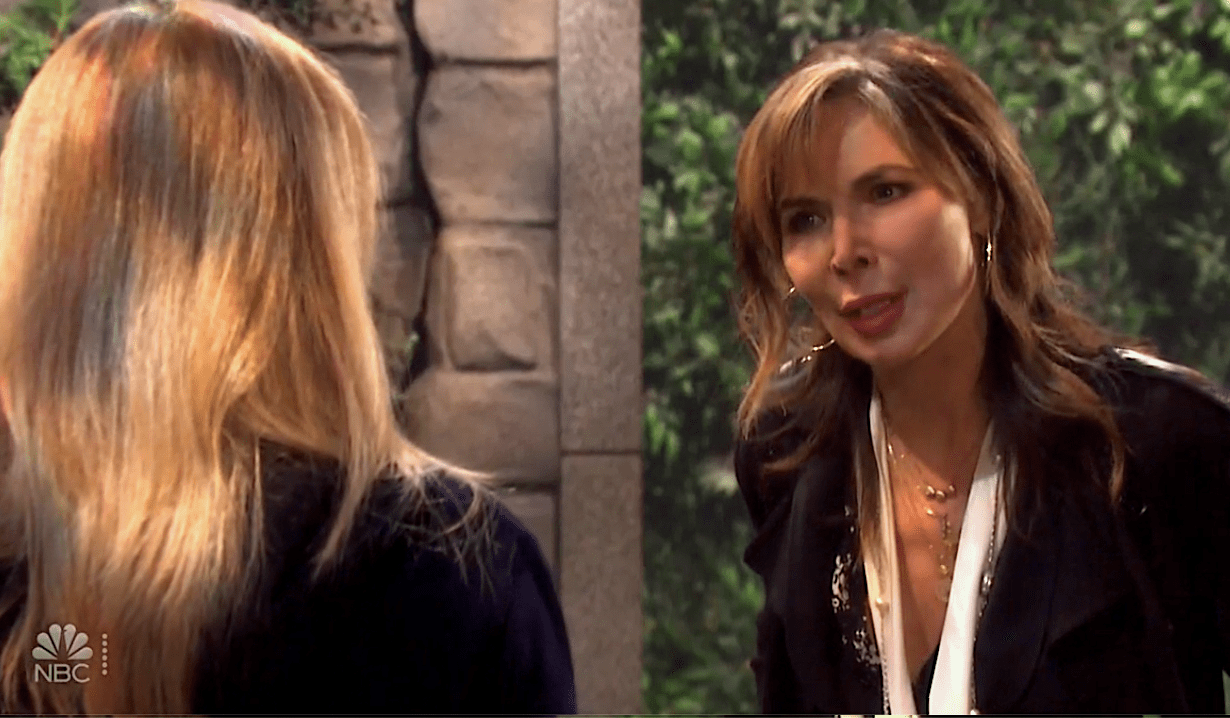 Jennifer confronts Kate in the park about sleeping with Jack. Kate assures her it was one night over a year ago. She’s had nothing to do with him since. Jennifer wonders what she and Jack were just talking about then. Kate explains they just ran into each other. She relays that she told Jack how sorry she was. Kate assures Jennifer she has no interest in her husband. Jennifer retorts, “Like you had no interest in my father?” Jennifer accuses her of preying on men in times of personal tragedy. Kate points out Jack was no victim. His heart was into everything they were doing, along with the rest of his body. Jennifer slaps her. Kate is impressed that Little Miss Holier Than Thou can dish it out. She wonders if she can take it as well. She slaps her back. Kate reminds Jennifer that Jack sat by her side for a full year even though it looked like things were hopeless. He had one moment of weakness. How long did she want Jack to wait? Did she want him to martyr himself against the altar of Jennifer Horton? “Get over yourself,” Kate yells. She extols Jack’s devotion, warning Jennifer could lose him again. Jack saddles up to the bar at Brady’s Pub. Roman pours him a drink as Jack laments recent events. Roman lets him know he was fully aware of his and Kate’s relationship. He watched it unfold. Jack assures him they only slept together once. Jennifer never would have found out about it if it wasn’t for Abigail. Roman wonders if she’s really the one to blame. Jack admits the person he’s maddest at is himself. Roman tells him he can’t change what happened, he can only make things right. Jack intends to and leaves.

Jack sees a distraught Jennifer in the square. She looks at him, but walks into the hotel without a word. 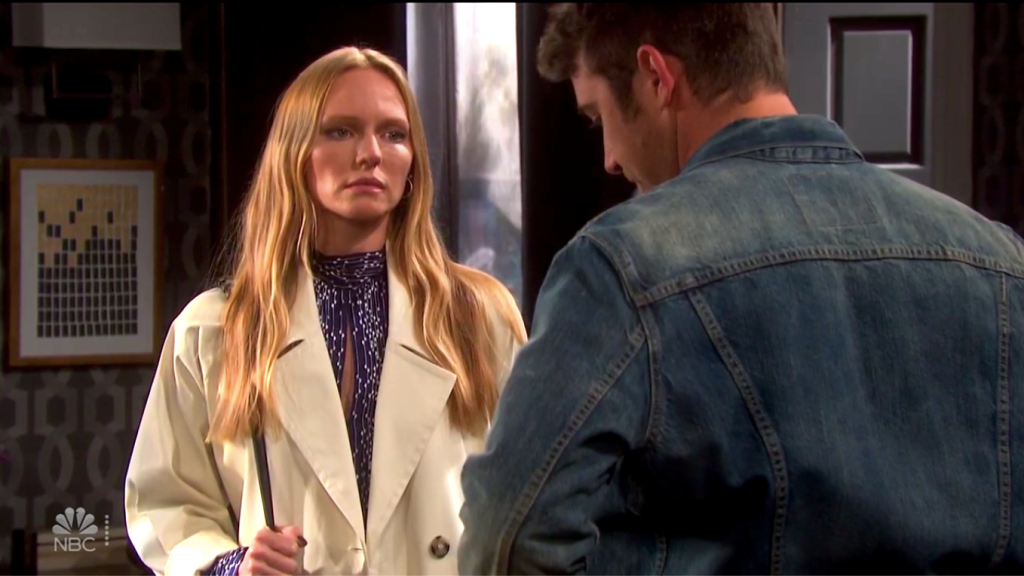 In JJ’s room, Abigail explains she has no idea what came over her at the party. JJ assures her their mother doesn’t blame her. Abigail knows she shouldn’t have been drinking with her meds. JJ agrees. He thinks that’s something she can take responsibility for, but what happened is not her fault. Abigail appreciates that, but she knows it wasn’t her place to do what she did. 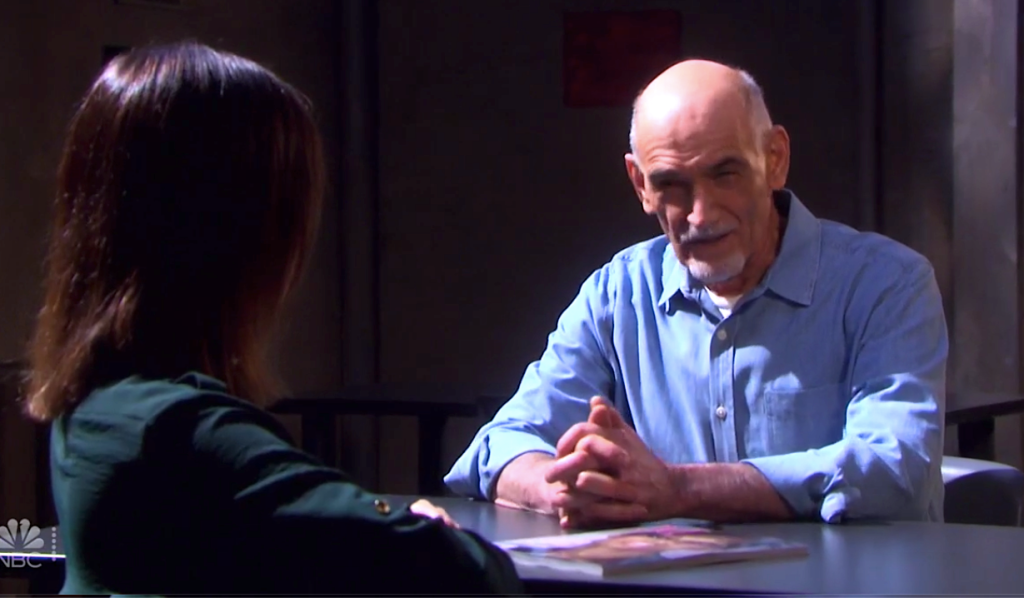 Gwen visits Rolf in prison. They discuss the little favor she did for him. She reminds him that in exchange, he will continue to keep quiet. She came to update him on Operation Abigail. She delights in describing how Abigail outed Jack and Kate in front of everyone. In one night Gwen blew up Jack and Jenn’s marriage and made Abigail the bad guy. Rolf cackles. Gwen says it’s on to phase two, which is to make Chad lose his mind over Abigail and Jake. She doesn’t need Abigail to actually cheat on Chad, she just needs Chad to think she did. When Chad kicks his wife to the curb, she will be there to comfort him. Rolf wonders why she dislikes Abby so much. Gwen says she doesn’t just dislike her, she hates her guts. Rolf is on pins and needles wondering why she holds such a grudge. After confirming she’s not related to Chad, Gwen tells him everything.

More: Characters still on their way back to Salem In the garage, Chad demands to know what Jake and Gwen were talking about back at the mansion. Jake starts to explain, but Li Shin interrupts. Chad assumes he’s there for him, but Li corrects him. He’s there for Jake. Chad’s stunned to learn Jake reached out to Shin and has his personal number. The brothers bicker in front of Li over Jake’s role in the company. Li tells them Chad will remain the CEO, but the board would like Jake to be vice president. He’ll have to prove himself, though. Jake grins, as Chad looks less thrilled. Li leaves. Chad says he’s going home so he can make popcorn to enjoy while watching Jake implode. He sees Abigail’s scarf. Jake says she was there. Chad pointedly tells Jake he is the one who comforts his wife and leaves. An exasperated Kate shows up looking to blow off some steam. Jake grins. She came to the right place.

Chad returns home and gives Abigail her scarf. He says she must have dropped it on her way out. He reassures her about her parents. They know from experience that love can overcome anything.

Next on Days of Our Lives: Belle makes a wedding request and Sarah tails Philip.

Wondering if Gwen has family ties to Abigail? Look through the photo gallery of who her mother could be, then get your free daily soap-opera fix for Days of Our Lives — and all of the other daytime dramas — delivered straight to your email inbox by signing up for Soaps.com’s newsletter. 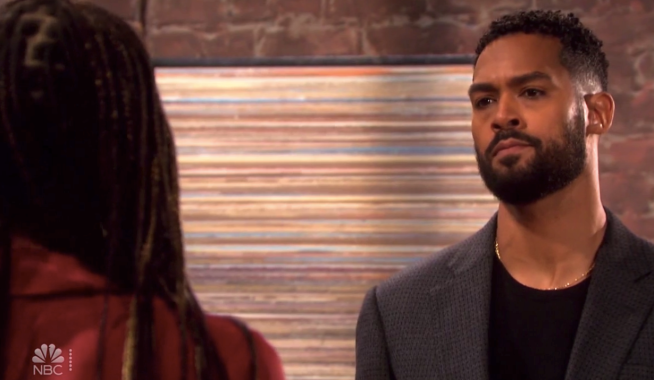 Shawn and Belle Prepare for a Lifetime of Happiness, But Jan Has Other Plans