Wednesday November 4, 2020: Today on Days of Our Lives, Brady toys with Eli, Steve supports Tripp, and Allie knows what she has to do. 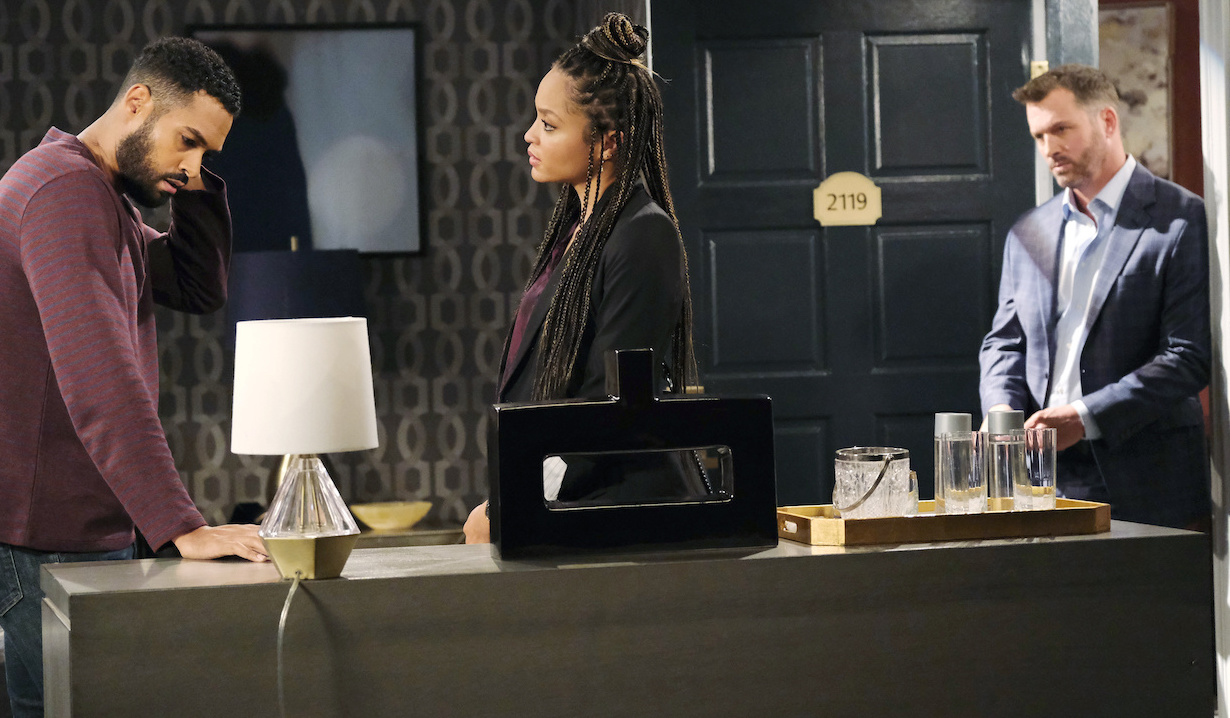 Abe finds Kayla at the hospital. She tells him Eli had a really good night and Lani can take him home as soon as he’s cleared. Meanwhile, Lani enters Eli’s room, but he’s not there. She finds his hospital clothes in a bag and makes a call. 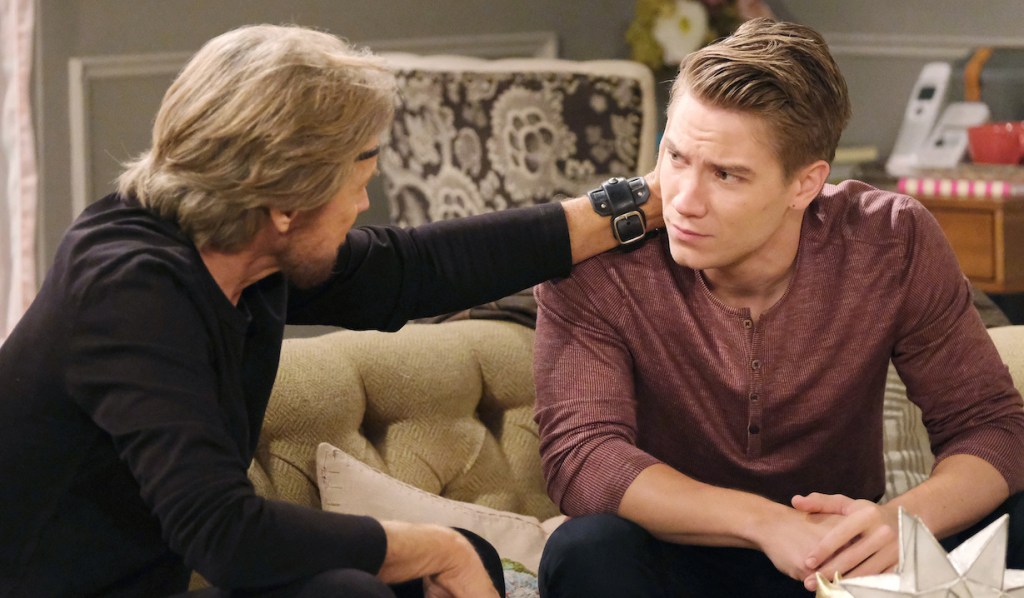 Tripp pours himself coffee at home as he tells Steve there’s no way he could be Henry’s father. The results have to be wrong. They talk about Kayla running another test, musing on Allie learning the dark art of DNA test tampering from Sami. Kayla returns. She ran the test three times and they all came back positive. Tripp and the baby definitely share DNA. The only other person who could produce those results is his father. Tripp continues to defend himself, but she says tests don’t lie. Tripp asks, “Are you saying I do?” Kayla responds, “I guess I am.” Tripp insists nothing happened between him and Allie. Kayla says he has no idea how much she wants to believe him and leaves for the hospital. Tripp asks Steve if he also believes he’s a rapist. Steve asks him to look him in the eye and swear his version is the absolute truth. Tripp does exactly that. Teary-eyed, Steve promises they will get to the bottom of this. Tripp asks how. Steve says, “I’m your dad. Leave it to me.”

More: Gwen’s mother could be someone viewers already know

Nicole finds Allie in her living room tending to Henry. She wonders where she was last night. Allie tells her the DNA test results came back and Tripp was a match. Nicole wonders why she looks so upset then. Allie relays how Tripp wanted Kayla to re-run the test. She can’t understand why Tripp is adamant that he’s innocent when the test proves otherwise. Allie gets a call from Kayla who asks her to come to the hospital.

At the Kiriakis mansion, Justin talks to Adrienne’s photo, as Bonnie knocks on the door. He looks rattled, but invites her in. She says she’s there to find out if her donating all her settlement money worked and Justin has forgiven her. Justin is impressed with how she’s trying to turn things around. She knows giving up life-changing money was the right thing to do, mostly because it made him happy. She didn’t do it to bribe him into forgiving her though. Justin knows that and tells her she has his forgiveness. She jumps on him with a hug. Justin backs away explaining today is his and Adrienne’s anniversary. Bonnie leaves as Steve and Tripp arrive. Tripp gives Justin the test results. He tells him to look at them before he decides if he still wants to represent him. Justin agrees to stay on as his lawyer.

Abe enters Eli’s hospital room as Lani leaves a message for her husband. Lani worries to her father about where he could be. She remembers they both downloaded the Find My Phone app and is surprised to discover his location.

Eli arrives at Brady’s door. He ignores a call as they argue over Eli’s role in Kristen going to prison. Eli says he’s there to make sure Brady keeps his promise and not tell Lani. Brady points out he has nothing to lose now, so maybe Lani deserves to know what Eli did to her best friend. Lani knocks on the door. Eli pleads with Brady not to tell his wife what he did. Brady saunters over to the door and opens it. Lani rushes over to Eli wondering why he’s there. Brady says it’s because Eli wanted to check on him. Confused, Lani says it was very thoughtful. Eli grabs his head and says he’s not feeling well. She helps him exit the room as she asks Brady to give Kristen her love. Brady looks enraged after they leave. He tells Kristen’s photo that as a recovering alcoholic he has to resist the urge to do what would make him feel good in the moment. However, telling the world what Eli did would feel a lot more satisfying than taking a drink. He says one of these days he might have to fall off the wagon and blow that son of a bitch out of the water. 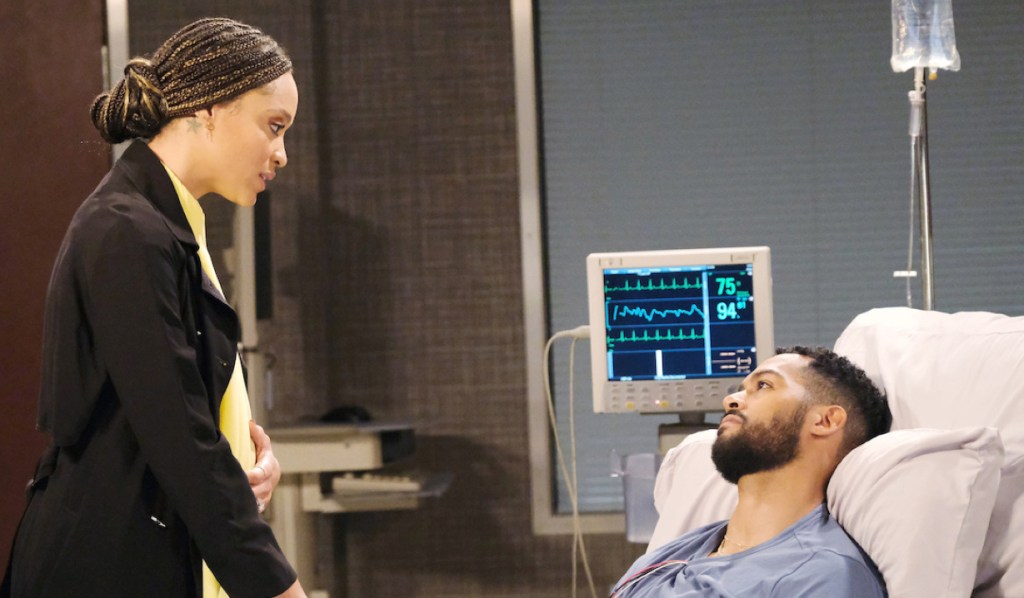 Back at the hospital, Lani gets Eli settled in his bed and then leaves to find out when she can take him home. Abe demands to know why Eli left, which scared Lani. Eli confides he had to make sure Brady kept his mouth shut. It worked for today but he’s not sure how long Brady will keep quiet. 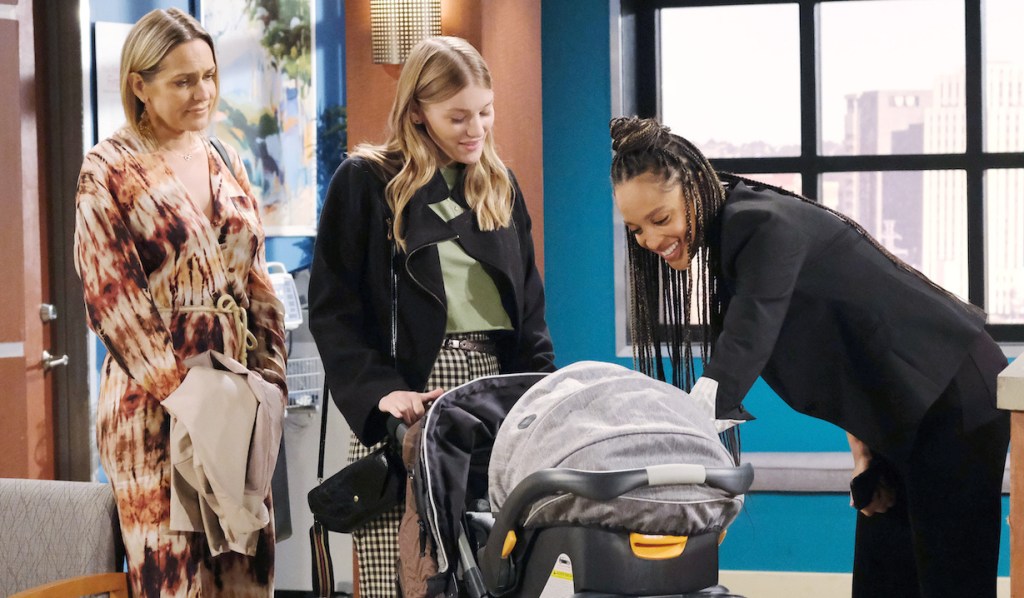 Allie and Nicole enter Kayla’s office. She tells them the new test proves Allie’s claims. Kayla asks what she wants to do next. After Nicole assures Allie she supports her decision no matter what, Allie says it’s up to her to stop Tripp from doing this to another girl. After leaving Kayla’s office, Allie and Nicole run into Lani. They tell her about the test results. Allie will do whatever it takes to make sure Tripp pays for what he did to her.

On the next Days of Our Lives: Jake shows up for Ben and JJ returns.

Join us in the photo gallery below as we try to figure out who is Gwen’s mother. And if you haven’t yet, get your free daily soap-opera fix for Days of Our Lives — and all of the other daytime dramas — delivered straight to your email inbox by signing up for Soaps.com’s newsletter. 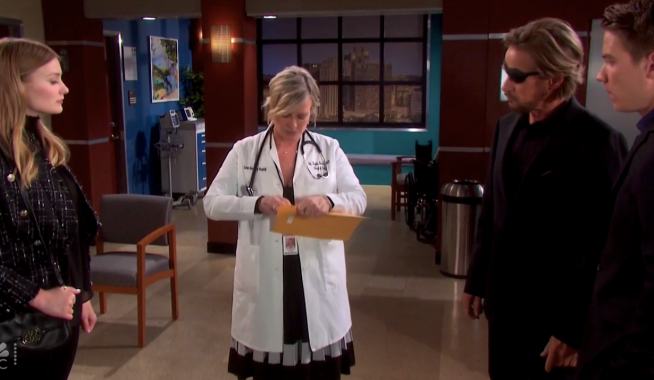 Tripp Is Floored When Kayla Reveals the DNA Test Results

Gwen's Games Begin, Starting With a Surprise Return and a Mysterious Letter 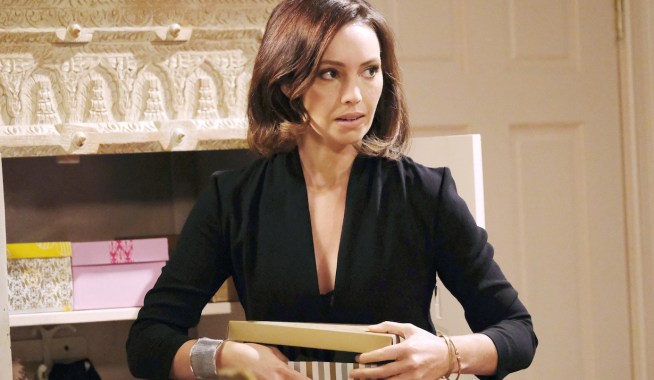