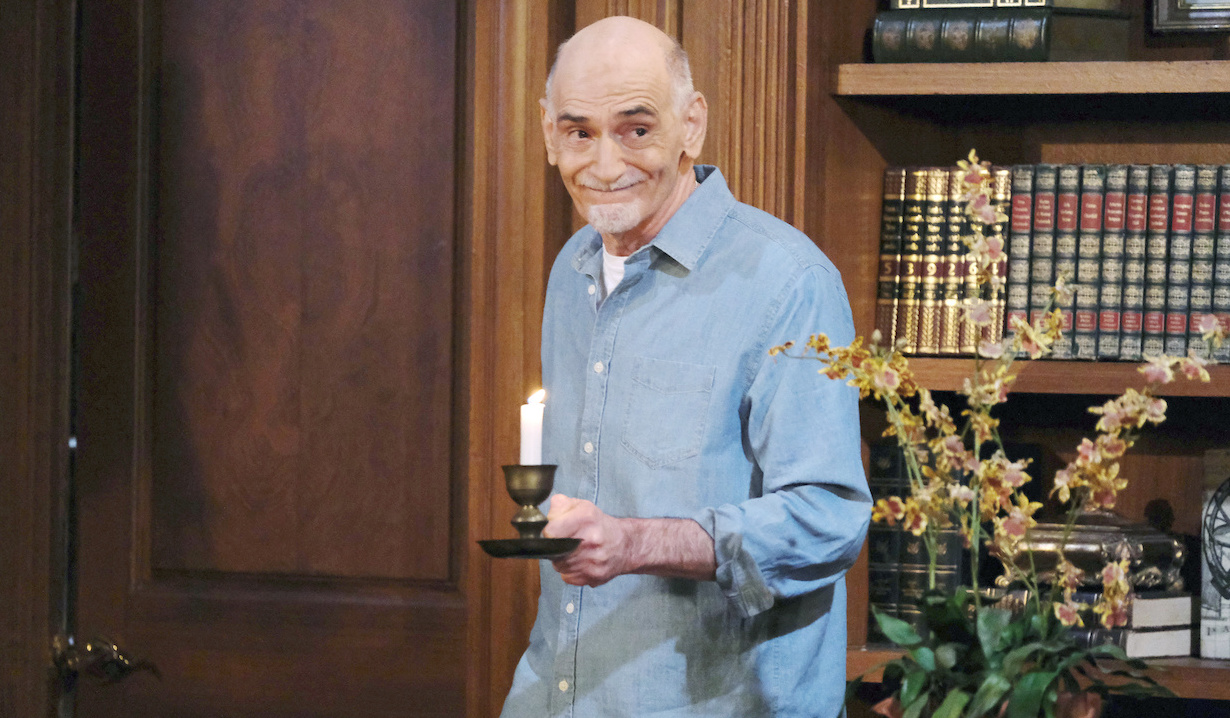 After having sex with Abigail in their bedroom, Chad heads downstairs to check on something. He enters the living room and rifles through the desk drawer for a flashlight. He sees Rolf holding a candle. Rolf says, “Boo!” and chuckles. Chad orders him to leave, but Rolf demands the microchip containing Stefano’s essence. When Chad balks, Rolf pulls out a gun. Chad tells him he doesn’t have the chip anymore because he and Tony set it on fire. Rolf cries as Chad says his father is gone for good this time. Not even Rolf can bring him back. Rolf says if Stefano is truly gone then he must avenge his death. Rolf re-centers his gun on Chad. 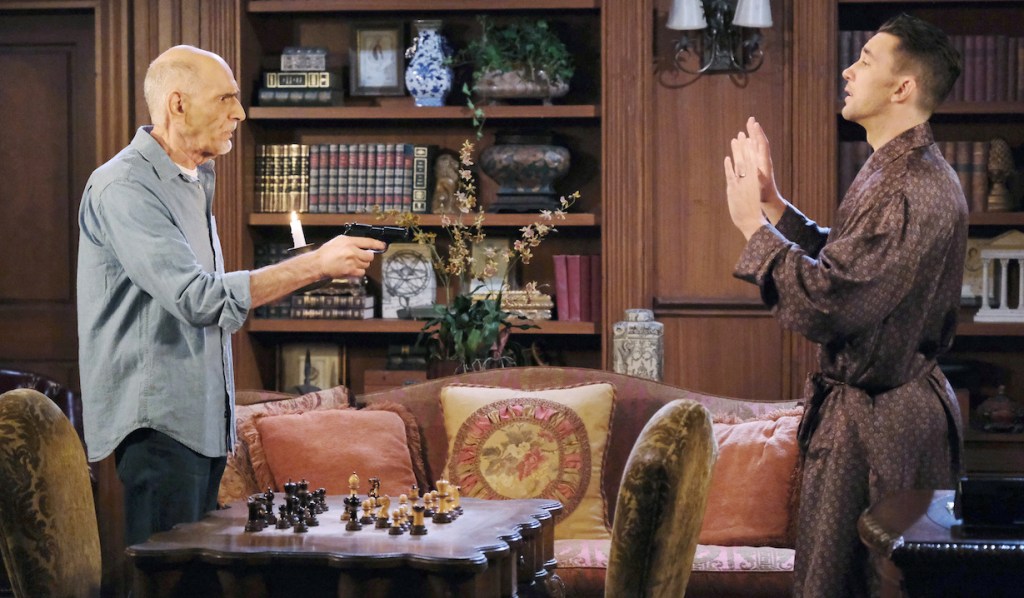 Back in the bedroom, Gwen visits with Abigail. They talk about Chad and Jake’s feud and Jake accusing Gwen of having ulterior motives with the party. Abigail reiterates how much she appreciates her help. Gwen says she’s looking forward to it, maybe more than anyone else. Gwen leaves her a copy of the menu to go over and then wonders if Jake should still be invited. Abby is hopeful he and Chad can co-exist, believing they’re more alike than they realize. She shares how Chad struggled to find his place with the DiMeras in the beginning too. Getting to know Stefano wasn’t exactly a positive. Abby says Chad is everything Stefano wasn’t. Gwen is sure Abigail had something to do with that and asks how her family felt about them getting married. She notes they had doubts, but he’s a member of the family now. Gwen is happy Chad got a happy second family. Abigail notes her parents weren’t always the ideal couple or this happy. She thinks they’re inspirational though because they prove no matter how bad it gets love wins out. Gwen says seeing them all gives her hope.

More: Could these two Days characters secretly be related? 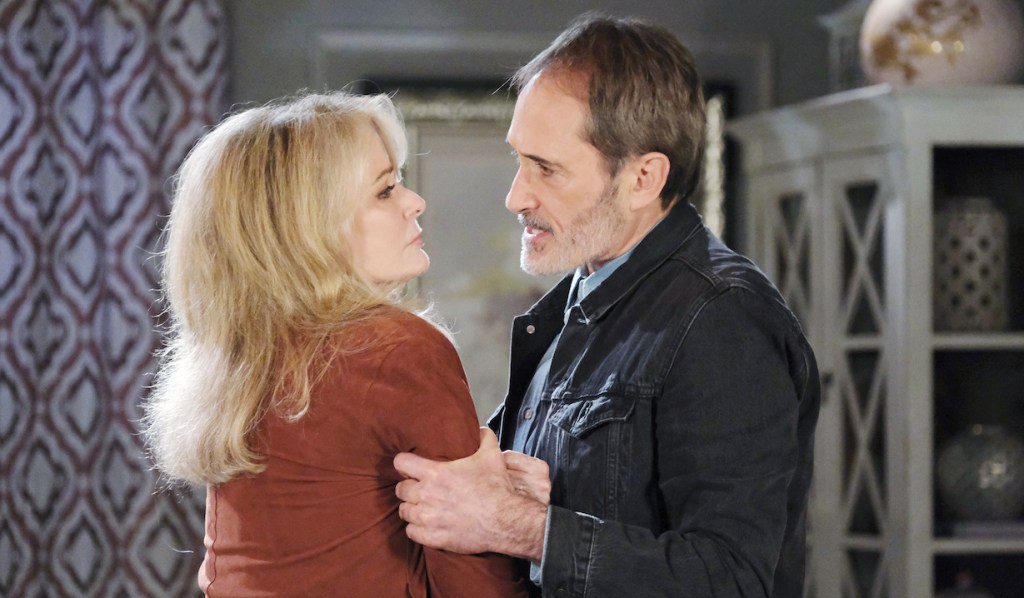 Eli and Lani have dinner by candlelight at home. Lani can’t stop thinking about why Kristen suddenly confessed to stabbing Victor. She doesn’t think it makes sense. Eli starts to tell her something about Kristen, but Shawn calls Lani to tell her about the prison break.

Marlena is startled by Orpheus sitting in her living room. She warns him John is home, but he knows John is in no shape to defend her. Marlena calls him a fool to underestimate John. She thinks he could be there in a second if she called him. Orpheus suggests they let him sleep so Marlena can have some alone time with him — her worst nightmare. He says he caused the blackout in Salem. Specifically, he brought the cloak of darkness down upon her world. She wonders why. He needs her help and trusts that she will see it’s in her best interest to oblige. She declines, but Orpheus grabs her and threatens John if she doesn’t help him. Panicked, Marlena agrees to help him. Lani knocks on the door. Orpheus aims his gun on Marlena, demanding she get rid of her. Marlena opens the door to Lani who just wants to make sure she’s safe with Orpheus on the loose. Marlena says she’s fine and Lani leaves. Once the coast is clear, Orpheus leads Marlena out of the apartment.

More: Our pitch to combine three soaps in one 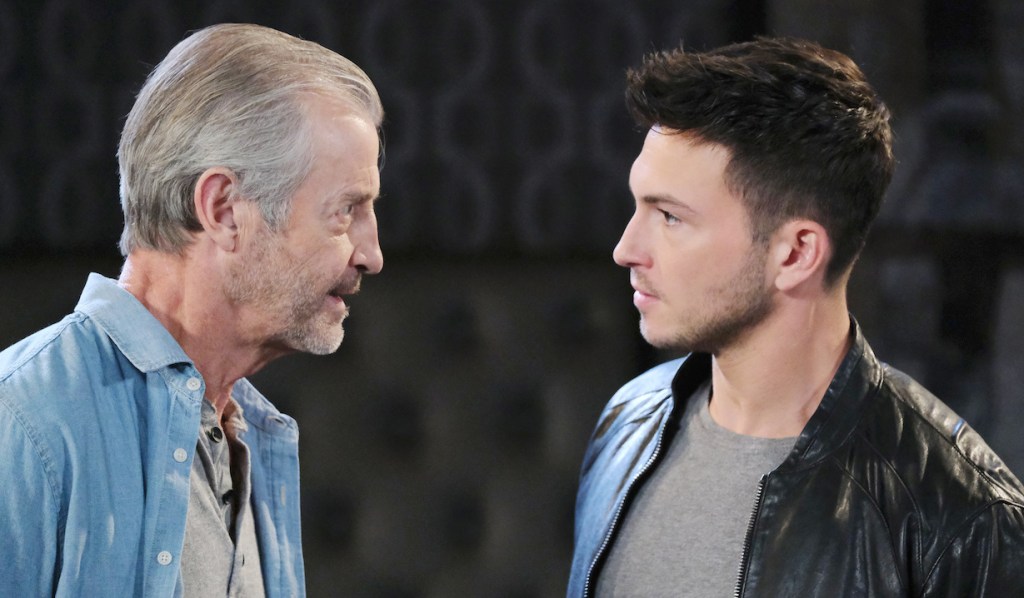 Ben is shocked to open his hotel room door to Clyde who tells him the breakout was Orpheus’ idea. Ben urgently calls Dr. Evans to warn her. He leaves a message asking her to call him back to let him know she’s okay. Clyde wonders why his son cares so much about Marlena. He responds that Marlena gave him his life back which led him to Ciara. As he emphatically talks about his love for his wife, Clyde tells his son how sorry he is. Ben is dubious, but Clyde wishes he could be at the memorial for him. Ben says he’s probably not going either. Clyde wonders what else he has to do. Ben wants to honor her in his own way. Clyde can see Ben has vengeance in mind. Ben confirms that Vincent needs to pay, as Eli knocks on the door.

On the next Days of Our Lives: John worries about Marlena and Eli questions Ben.

Refresh your memory on Clyde’s history in our photo gallery below. Then get your free daily soap-opera fix for Days of Our Lives — and all of the other daytime dramas — delivered straight to your email inbox by signing up for Soaps.com’s newsletter.

<p>Clyde Weston arrived in Salem in search of his estranged children, Jordan Ridgeway, whose real name was Tammy Sue, and Ben Rogers, who was originally named Oliver. Jordan took her brother and ran away from the abusive Clyde years ago and changed their names. </p>

<p>While Jordan despised Clyde, Ben was young when he and Jordan ran away from home and wanted to know his father. He even took Weston as his last name. At one point in trying to make his son happy, Clyde had Abigail Deveraux’s pregnancy paternity results switched to show Ben was her baby’s father and not Chad DiMera. Abby was also set to inherit a large lot of land that Clyde felt could benefit his son. </p>

<p>Clyde Weston and Kate Roberts had a brief fling. Kate had become suspicious of Jordan after finding she had multiple licenses and identities and was led to her hometown of Poplar Bluff where she met Clyde. Eventually, Clyde began exhibiting the same traits as Kate’s ex Curtis Reed, he was controlling and jealous, so she broke up with him. </p>

<p>Clyde ran a trucking business, which was really a front for a drug ring. He eventually enlisted JJ Deveraux, an addict, to sell for him. He went so far to threaten to kill JJ’s mother Jennifer. What Clyde didn’t know is JJ was working for the DEA and Salem PD undercover to bust Clyde. </p>

<p>In prison, Clyde connected with Orpheus and Xander Kiriakis. All had bones to pick with people in Salem. They plotted a prison break and to get their revenge.</p>

<p>After breaking out of prison, Clyde, Orpheus and Xander Kiriakis terrorized Salem. Clyde attempted to kill Kate, kidnap Thomas Deveraux, and also took aim at Aiden Jennings during a press conference. Aiden was integral in putting him in prison. While trying to shoot Aiden he accidentally shot Mayor Abe Carver.</p>

<p>Clyde made a second attempt to kidnap Thomas Deveraux after using secret tunnels to get into the DiMera Mansion. He believed that Thomas should have been Ben’s son. Fortunately, he was lured into a panic room, trapped and arrested again. </p>

<p>When Hope Brady’s daughter Ciara went missing, she suspected Ben Weston, who had been released from prison a reformed man, had kidnapped her. She turned to Clyde hoping he could lead them to Ciara. He refused to help.</p>

<p>Ben hadn’t kidnapped Ciara but has rescued her after she crashed her bike fleeing Salem. However, he had gone off his meds and started to hallucinate. He was haunted by his father and finally began to recall his abuse as a child, including killing his pet cat. The Clyde hallucination tried to convince Ben to strangle Ciara, but Ciara was able to get through to Ben. </p>

<p>In a special April Fool’s episode, Clyde broke out of prison and once again terrorized Salem. He had become the head of a baby brokering ring and was involved with Leo Stark. Leo kidnapped Eli Grant and Shiela’s baby and tried to sell it to Will Horton and Sonny Kiriakis. Of course, once the day was done, we learned the episode wasn’t real and all in fun,</p>

<p>After a time jump, Ben was reunited with Clyde in prison. He had been framed for killing his sister Jordan Ridgeway. Clyde formulated a plan to kidnap Mackenzie Horton to force Xander into confessing to killing Jordan to free Ben.</p>

<p>When Will Horton, also in prison for the believed drunk driving involved death of Adrienne Kiriakis, learned of Clyde’s plans for Mackenzie. He tipped off Ciara. Ciara rescued the baby and Clyde was furious. Clyde tried to shank Will, but Ben stopped him and was stabbed instead. Rather than blame it on Will, which Clyde pushed him to, Ben turned his father in.</p> 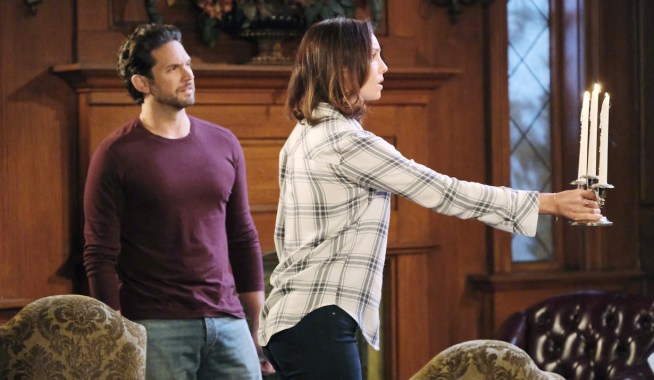 When the Lights Go Out in Salem, Ciara Appears With an Urgent Request 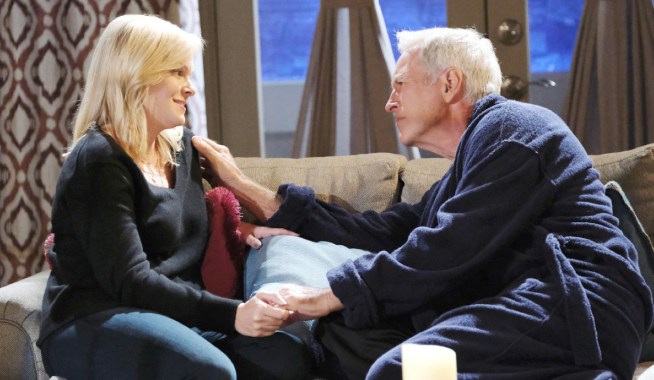