Monday October 12, 2020: Today on Days of Our Lives, Eli is tormented, Kristen prepares to face her future, Gwen gets a history lesson, and Jake gets flirty with a new woman. 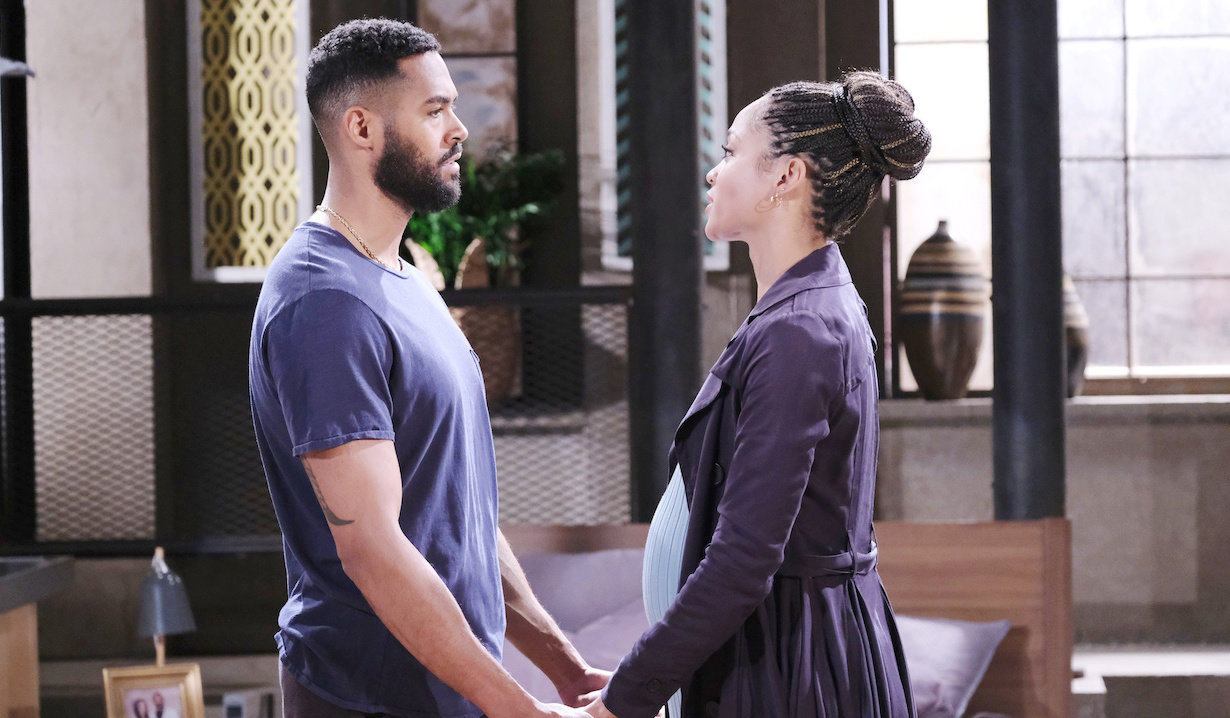 In the DiMera living room, Jack and Jennifer talk about how amazing Abigail is as they read her article that sympathizes with Kristen. Gwen enters with laundry and overhears their conversation. She relates to Kristen’s crimes of passion and relays her fiery history with Jake. They move on to talking about Gwen’s job with the kids and Abigail going back to work at the paper. Gwen also hears all the details of Jennifer’s coma and how Abby was there for them the whole time. Gwen makes snide comments about how close they are with their daughter.

More: Could they recast EJ DiMera with these actors?

Upstairs, Chad reads his wife’s article in bed. He praises Abigail and remarks that Kristen deserves a break. He passionately kisses Abby, but she stops him. She thinks his brother could use a break as well. Chad wonders where this is coming from. Abigail tells him Jake asked her to talk to him. Chad gets upset. When did she become a fan of Jake’s? Abigail tries to defend him, but Chad isn’t having it. She assumes he doesn’t like Jake because of her. Chad thinks Jake could be the same as Stefan since they have the same DNA. He admits that whenever he sees Jake, he envisions walking in on her with Stefan. It kills him all over again. He thought he’d gotten over what Stefan did to her, but then Jake showed up. Abigail understands, but assures him he has no reason to feel threatened by Jake or anyone else. It means everything to her that he never stopped loving and supporting her. Chad says he almost lost her to Gabi, again. She reminds him that Gabi is gone and no one will come between them again. 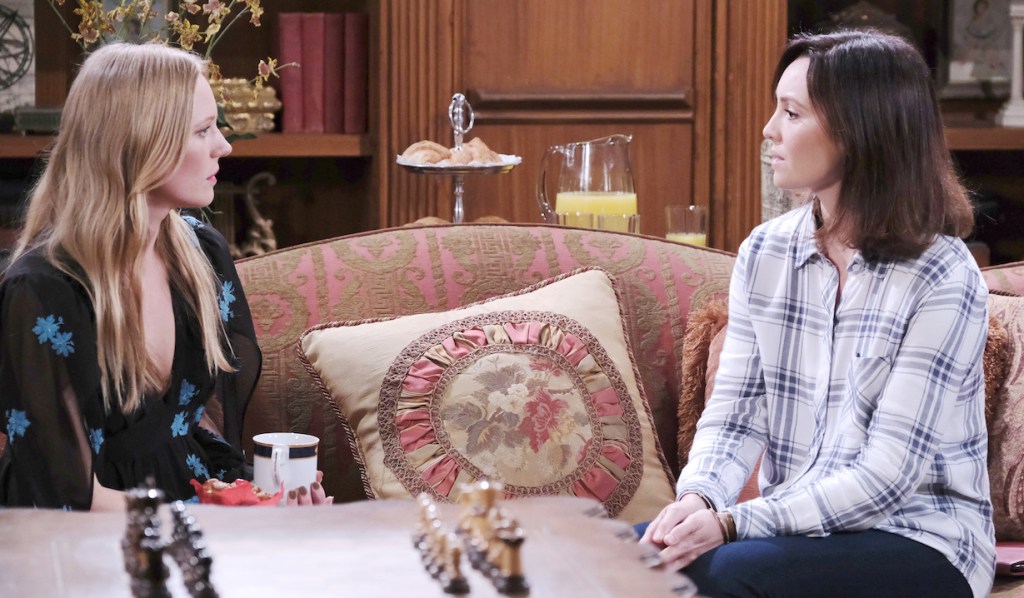 Abigail and Chad head downstairs. Jack and Jennifer heap praise on their daughter. Gwen seethes over the love fest. After everyone else has left, Gwen talks with Abigail about how lucky she is to have such great parents. Abigail relays how there have been a lot of bad times, but Jack and Jennifer got through it. A restrained Gwen remarks how so many families crash and burn. When she learns the anniversary of Jennifer waking up from her coma is two weeks away, she gets the best idea of how to mark the occasion.

More: The men of Salem enraged in spoiler video

Kate visits Jake at the garage. She flashes back to her telling Chad she’ll keep an eye on Jake for him, but tells Jake she needs help with her car. After looking at it, he says it could take a while. As Kate waits, they talk about DiMera and why Chad doesn’t like him. Jake is surprised by the details, but claims he’s not a monster like Stefan. It’s not fair that he’s being punished for looking like him and brings up Gabi. Kate says she’s gone, so does that mean he’s going back to Gwen? Jake says they’re bad for each other and turns it around on her. He asks if she’s ever been in love. She admits she was with his father, Stefano. He wonders if she’ll ever find love like that again. She says he asks too many questions. Jake smirks as he tells her he wasn’t unhappy seeing her in her robe the other day. In reaction, Kate trash talks both Jake and Gwen. Undeterred, Jake starts to pay Kate another compliment, but Chad’s arrival stops him. He asks if he’s interrupting anything. 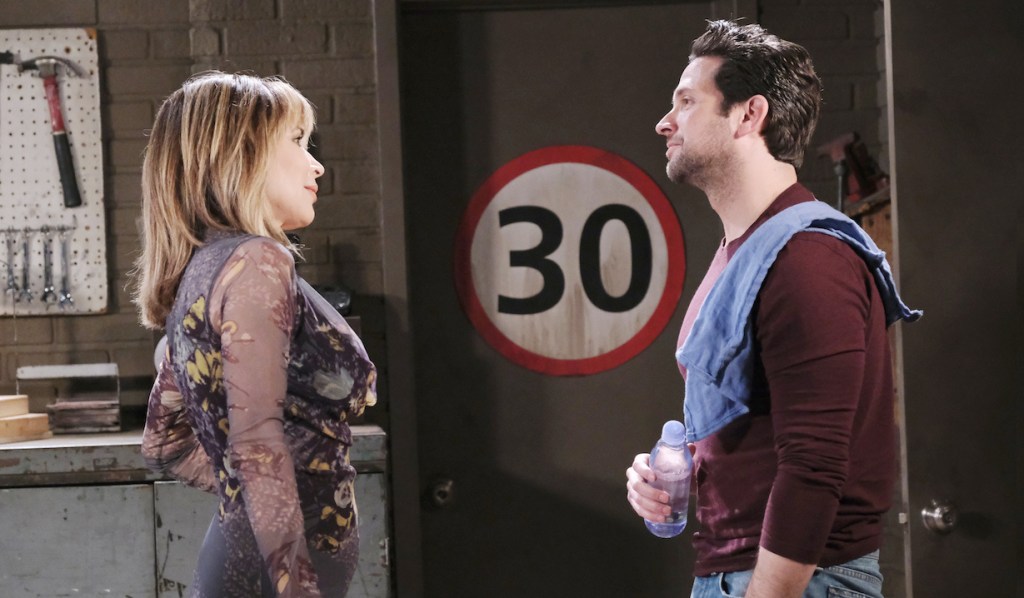 In their hotel room, Brady urges Kristen to remain positive about her court date. There’s a knock at the door. Brady thinks it’s room service, but he opens it to Melinda who warns this could be Kristen’s last morning as a free woman. Brady orders to her get out of there. After more taunts Melinda obliges. Brady reassures Kristen, who worries Rachel will grow up without her. After Kristen tearfully tells Rachel how much she loves her, Brady encourages Kristen to remain positive and leaves with the baby so Marlena can babysit. 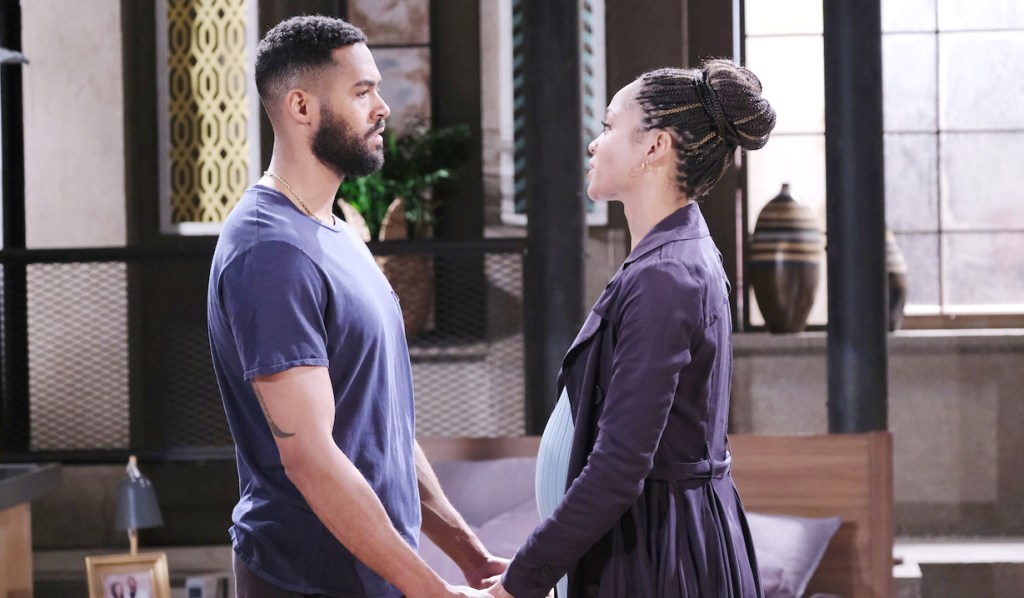 At home, Lani wakes up Eli who’s having a nightmare about Lani finding his recording of Kristen’s confession. She hands him the phone. Trask wants to talk to him. Melinda asks if he got Kristen’s confession. He speaks in code because Lani’s there. She orders him to get rid of his wife and to call her back. After he hangs up, Lani remarks she’s going to Kristen’s hearing, but Eli doesn’t think it’s a good idea. Lani isn’t worried about Melinda so she’s going to be there for her friend. Lani kisses him. He looks worried and holds her tight. After Lani leaves, Eli calls Melinda. He confirms he has Kristen’s confession, but wants assurances. Melinda agrees to put it in writing that she won’t go after Lani and orders him to bring her the recording. After hanging up, Eli relistens to the recording, weighs his options, and leaves.

As Lani meets with Melinda, Eli shows up at Kristen’s door. He tells her he taped her confession.

Next week on Days of Our Lives: Gwen enacts her new plan and Eli comes clean.

Look through our photo gallery of Gabi’s most memorable moments below and then get your free daily soap-opera fix for Days of Our Lives — and all of the other daytime dramas — delivered straight to your email inbox by signing up for Soaps.com’s newsletter.

Philip Makes a Cryptic Call About...