Thwarted in Her Attempt To Drug Abigail Again, Gwen Meets With Her Partner in Crime [SPOILER]

Thursday September 24, 2020: Today on Days of our Lives, Gwen's plans go awry, Justin is rattled by Bonnie, and Ben faces an empty home. 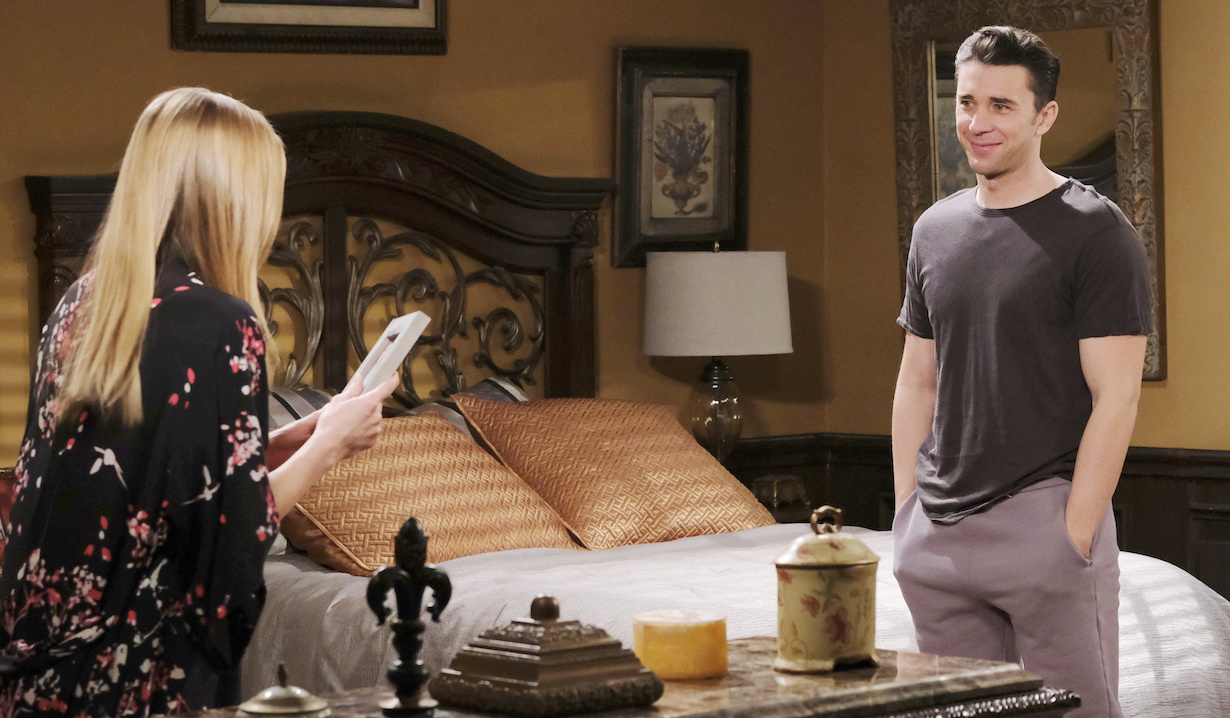 Steve visits John in his hospital room and learns Marlena is with Ben. The men play cards and talk about Ciara’s death. John can’t understand Marlena checking on Ben considering he tried to kill Will. When Steve praises Marlena’s compassion, John demands to know if he’s trying to move in on his wife. John yells about Steve wanting Marlena in the past. Steve reminds him it was Rolf messing with his head. He wasn’t in his right mind. John apologizes and worries he’s the one who’s not in his right mind. Steve reassures him. 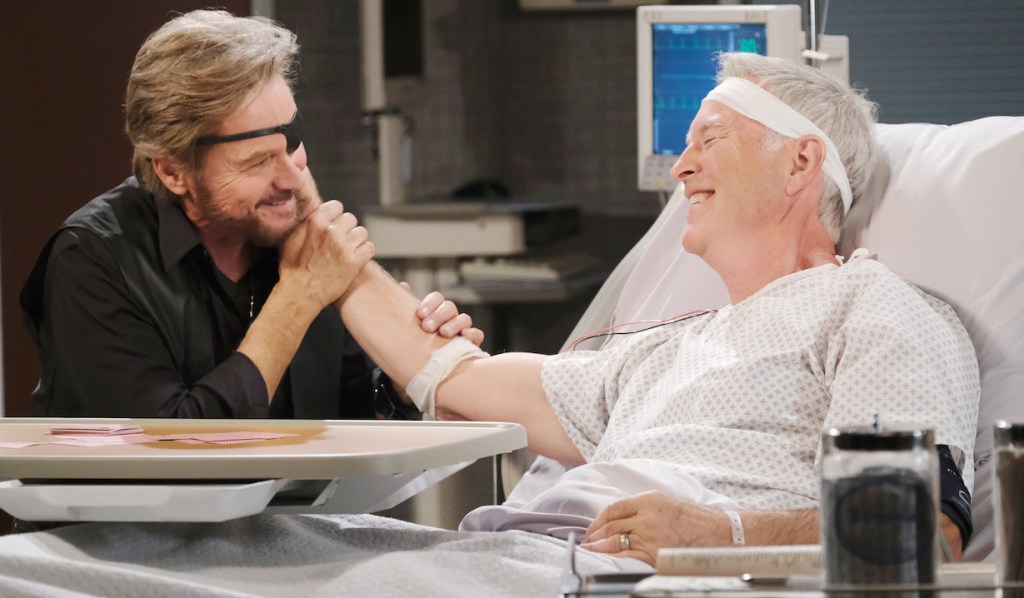 In his hospital room, Ben jolts awake from a nightmare about the car exploding. He yells Ciara’s name as Marlena comforts him. He says when Ciara needed him most he failed her. Ciara was the best thing that ever happened to him. She was everything, but now he has nothing except the wedding rings. He wonders how he is supposed to live his life when Ciara was his life. Marlena doesn’t know, but in time the memory of her will bring him comfort. After breaking down, Ben thanks Marlena for helping him. He asks about John. She lies that John is fine and then talks with Sarah. Marlena tells Ben he can go home. Ben says home is with Ciara. Marlena offers more comfort and tells him she will always be there for him. 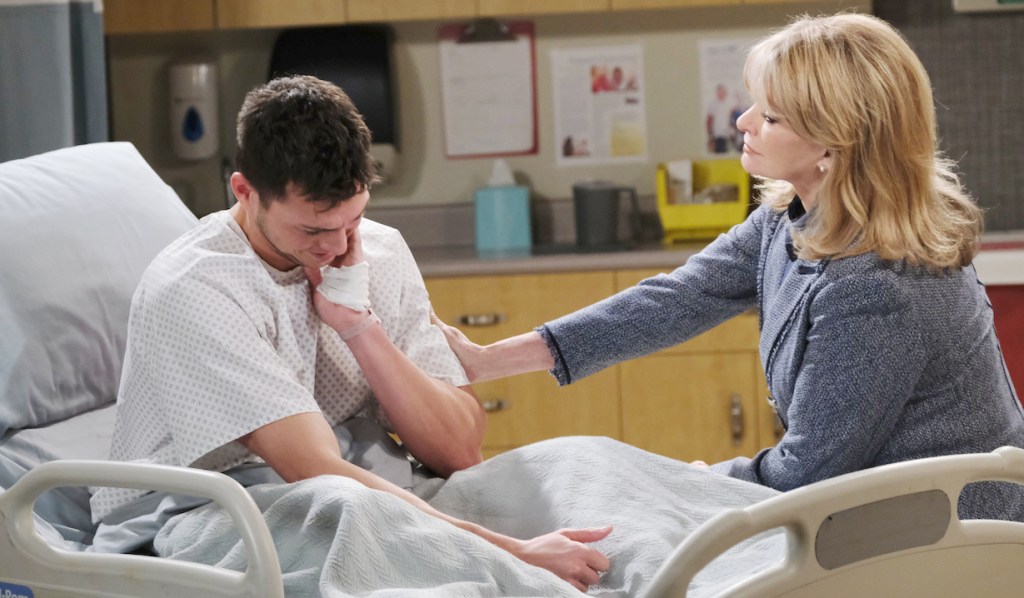 Ben enters his hotel room. He sees a suitcase on the bed and hears a noise. He says “Ciara.”

Upstairs in the mansion, Abigail sees a photo of Chad with a woman (ex-Abigail, Kate Mansi) and asks, “Who the hell is this?” Confused, he says the woman is her. She looks at the photo again and the woman in the photo is now her. Chad asks if she’s having a hallucination again. Abby thinks maybe she did but assures her husband she’s okay. The meds have made the hallucinations more manageable. She says at least he wasn’t kissing the woman in the photo. He wonders if she’s still upset about his kiss with Gwen. She says she was just joking. He tells her he loves her now and forever. When she tries to leave for a shower, he pulls her in close for a kiss and starts taking off her robe. 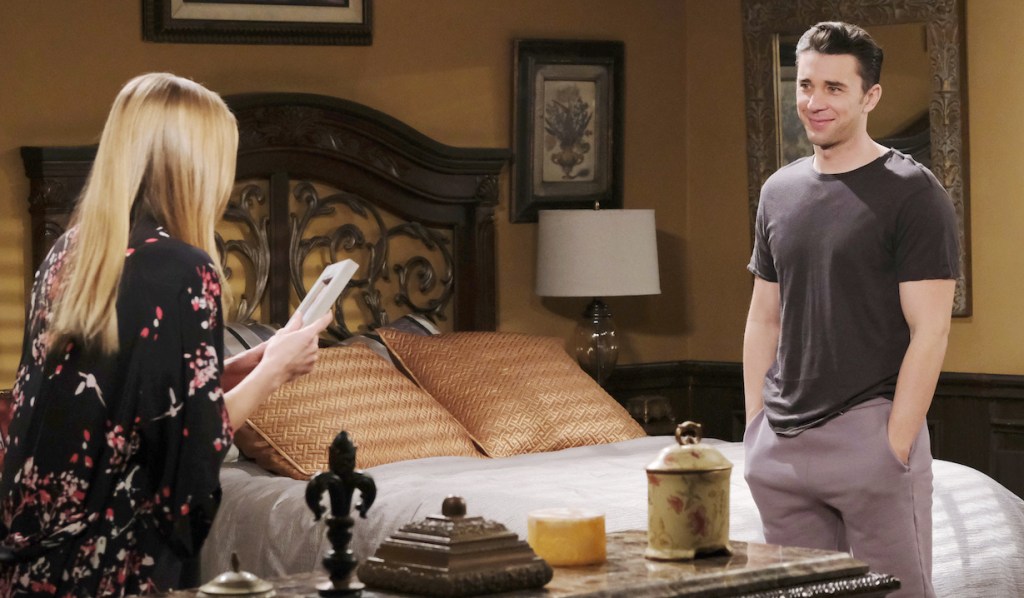 Downstairs, Gwen remembers trying to drug Abigail while fiddling with a vial. She says out loud today will be Abigail’s “unlucky” day as Jennifer and Jack enter. She makes veiled barbs about Abigail until Jack and Jennifer leave. Chad and Abigail enter. Gwen offers to pour them coffee as they canoodle on the couch. After adding drops from the vial, Gwen hands Abby a cup of coffee but Chad reminds her she can’t have caffeine with her meds. Chad tries to drink it instead but Gwen lunges for it and it spills on him. Gwen makes up something about Chad being rude for drinking caffeine in front of Abigail. Chad is incredulous but Abigail is more understanding. Gwen leaves and Chad and Abigail get back to flirting. 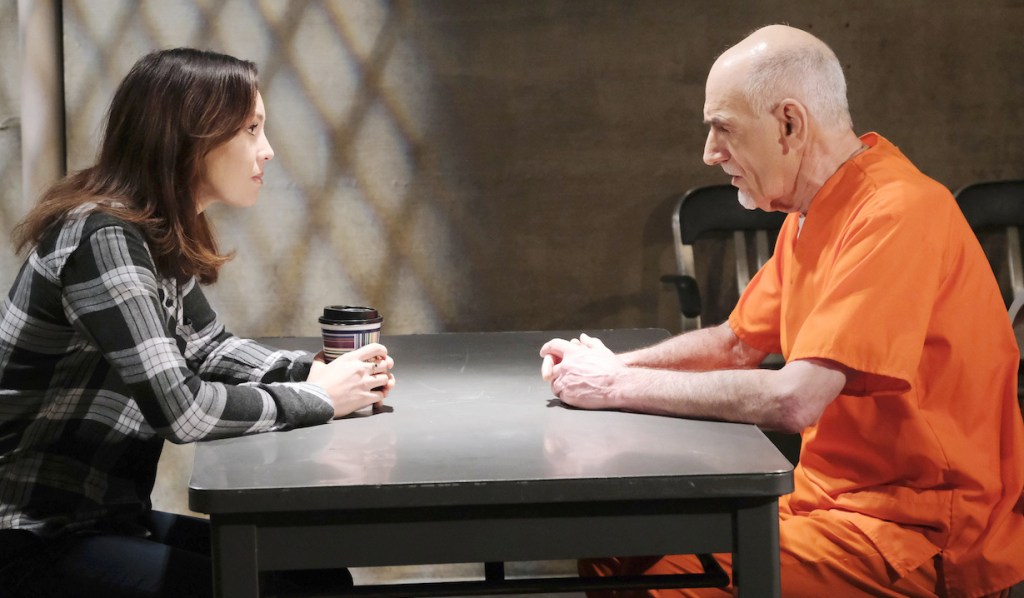 In a prison visitors’ room, Rolf enters and sees Gwen. She takes a sip of her coffee and says, “What’s up Doc?”

In the park, Justin jumps back after Bonnie kisses him. He asks, “What the hell are you doing?” She says she was just celebrating but notes he kissed her back. Justin insists he didn’t and rants about her being a con artist. She may look like Adrienne but she isn’t one-millionth the woman she was. He throws the cowboy hat at a stunned Bonnie and walks off.

Jennifer finds Bonnie crying at a table in the Square. She reluctantly asks what’s wrong and learns Bonnie kissed Justin. Bonnie sadly explains how Justin swooped in like John Wayne and was kind to her. She thought if he could be kind then maybe she could be kind to herself. She could forgive herself for what she did to Adrienne and put her past behind her. Jennifer can’t believe Bonnie could ever believe something could happen between her and Justin. After Jenifer leaves, Bonnie tries to stifle her sobs.

More: Remembering All My Children with rare photos

Jack enters Brady’s Pub and finds Justin drinking at the bar. A buzzed Justin tells Jack he’s feeling confused, foolish, and pathetic. Jack assumes he’s drinking over Kayla, but Justin corrects him and explains about his dealings with Bonnie. He knows he should have walked away from Bonnie in the beginning but instead, he betrayed Adrienne. Jack counters he didn’t betray his wife because it’s not like he has feelings for Bonnie. Right? Justin says of course not and rants about how insulting it would be to Adrienne and their kids. He takes another drink looking unconvinced.

On the next Days of our Lives: Sami and Nicole clash before Sami leaves and Tripp makes a request of Kayla. 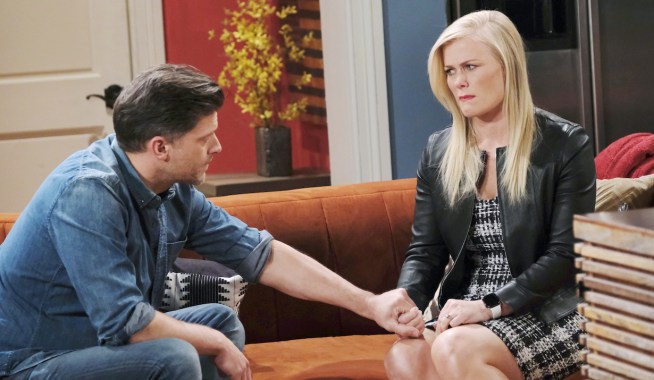 Sami Delivers a Stunning Ultimatum After Making an Unexpected Choice 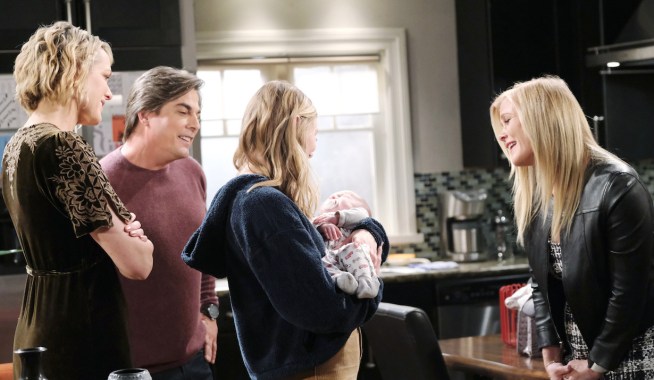