John Lashes Out at Sami — and Allie Returns!

Wednesday, September 16: John decides it's time to put Sami in her place, the scheme queen’s latest plot is derailed by a surprise, and Eric gets an offer. 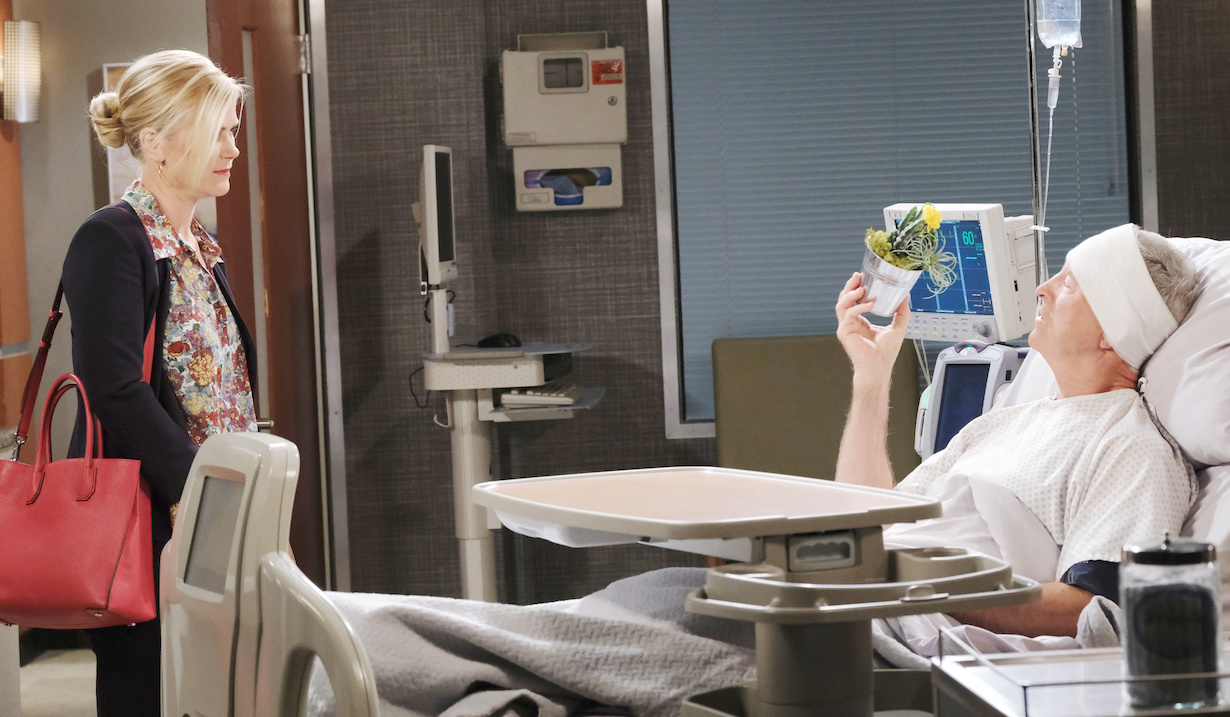 In John’s hospital room, Sami’s peace offering of a cactus (“The guy in the plant store said that it’s really low-maintenance, like me!” she quipped) was soundly rejected. Translation: John threw it at the wall! Although Sami’d obviously hoped that John had forgotten the exchange they’d had right before his collapse, that definitely wasn’t the case. “You said I was nobody!” John growled as only he can. “Leave it to you to bring in a plant that doesn’t need any care. That’s how you treat people, anyway — you think they can survive on nothing. But you, on the other hand… you need all the love and attention because you’re so special. Do you have any idea how sick I am of you?” I seriously thought the guy was going to burst another blood vessel. By the time he dubbed his stepdaughter “nothing but a mean, nasty bitch!” the twitterverse was practically cheering him on. Mind you, Sami being Sami, she gave as good as she got. “I hope you get another blood clot,” she spat, “and I hope it goes right to your cold, dark heart!” Marlena picked that moment to enter, quickly rushing her daughter out of the room.

Sitting at John’s bedside, Marlena questioned Sami’s version of events, finding it hard to believe that he’d been reduced to name-calling. But John confirmed that he’d done exactly that, wondering whether perhaps his outburst had been triggered by his recent medical crisis. “I said things to her I would never say to a woman, especially if that woman were your daughter,” he admitted. “What’s going on with me, Doc?” She insisted it wasn’t anything to be worried about, but John wasn’t so sure.

Elsewhere, Belle was livid to find Jan comforting Claire. When the young woman questioned why her mom was being so awful to her “old friend,” Belle snapped, “This is not my friend… this is Jan Spears!” When Jan claimed to have come by simply to offer her condolences upon hearing about Ciara, Belle knocked her rival’s proffered flowers right out of her hand. (It was  a rough day for gifted vegetation in Salem!) Belle refused to accept that Jan had changed her ways, which of course led to the schemer suggesting — in front of Claire — that surely people who’d overcome mental illness deserved a second chance. Unwilling to be manipulated, Belle threatened to get a restraining order and hustled Jan out. Unfortunately, Belle’s attempts to keep Claire from thinking of Jan as a new friend didn’t go well. “Are you saying she was reaching out to me, one nut job to another?” asked Claire. Which kinda was exactly what her mom was saying. Claire pointed out that she was only doing as well as she is because Ciara gave her the second chance that Belle was refusing to give Jan.

At the DiMera mansion, Lucas was struggling to keep Allie’s still-unnamed child entertained when Nicole walked in offering to help. (This despite the fact she was dressed to seduce, not babysit!) In no time, Nicole had the baby — and seriously, it’s time to give the bundle of joy a name — asleep in her arms. Fresh from the hospital, Sami walked in to reclaim Kiddo, as I’m going to call him until told otherwise, from her nemesis. Nicole blasted Sami for taking Kiddo away from Eric, who was “far and away a better person than you could ever be.” Once Nicole left, Sami told Lucas she knew what her next step should be: packing up Kiddo and leaving town, ASAP. As she was on the phone making plans for an escape to Rome — and fighting with the airline employee who insisted the baby needed a name in order to travel — Allie walked in, furious about her mom’s plan!

Meanwhile, Eric opened his front door to find a familiar (to him) face, Angie, who hoped to make him the proverbial offer he couldn’t refuse. No, seriously, she used those very words! The visitor caught Eric up on how the situation in Africa had deteriorated since last he’d been there and, suffice it to say, it was dire. In fact, she’d been sent by the tribal elders to find “Father Eric” and beg him to come back! “You may not wear the collar anymore,” she said, “but you’re still the same man.” She asked him to consider going back to Africa and, given that we’ve all known for a while now that Greg Vaughan will soon be checking out of Salem, it was pretty easy to predict which side of the mental coin flip he’d land on. Sure, he rejected Angie’s proposal, but upon hearing of their conversation, Nicole asked if staying in Salem was what he really wanted. 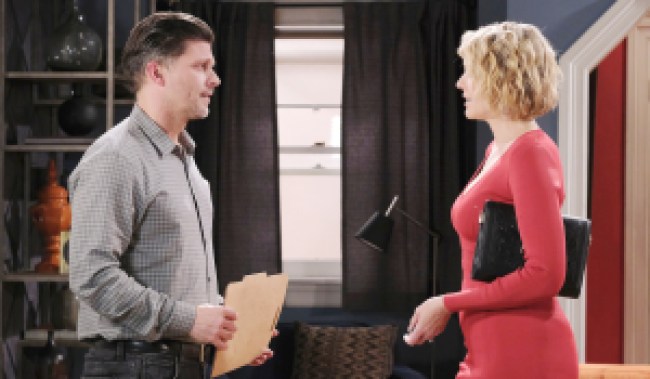 At his office, Philip started his day on a high note, thanks to a coffee cup declaring him “World’s Greatest CEO” courtesy of his mom. But before he could so much as take a sip, Xander stormed in demanding to know what Philip was doing in his office! (Let the games begin!) The two exchanged insults while metaphorically thumping their respective chests. “I see you need a chair with extra lumbar support since you don’t have a spine of your own,” said Xander, smashing Philip’s new mug on the floor. Hearing that Maggie and Victor had blessed Sarah and Xander’s reunion, Philip said that he had to stop drinking the local water because “it’s making people crazy!” Perhaps proving the point, Xander wheeled the office interloper out into the hallway, locking the door behind him!

Later, Philip crossed paths with Jan in Horton Square, and he was every bit as thrilled to see her as pretty much everyone else in Salem. Hearing that Jan thought she and Claire could become friends, Philip grabbed her by the arm and started issuing threats. As Xander listened in, Philip warned that if Jan didn’t stay away from Belle and her family, he’d take care of her “permanently.” Once Philip left, Xander — his eyes practically overflowing with ulterior motives — introduced himself to Jan. Meanwhile, Philip went to see Belle, making it clear that he’d keep her and Claire out of harm’s way. As the exes shared a hug, we couldn’t help but notice that he didn’t mention keeping her husband safe! 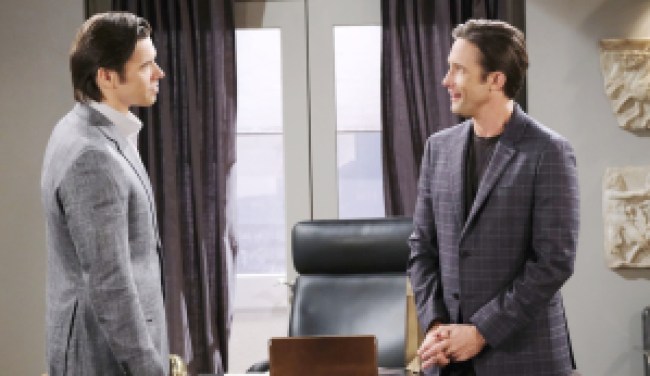 Days of our Lives will be pre-empted on Thursday, September 17, and Friday, September 18. When the show returns on Monday, September 21, Xander tries to manipulate someone into doing his bidding, and Shawn isn’t thrilled by Belle’s actions!

Can’t get enough of your favorite soaps? Subscribe to the Soaps.com’s newsletter. Meanwhile, check out the gallery below as we lay out exactly why Days of our Lives’ Chloe and Philip should be together!