Wednesday August 26, 2020: On Days of our Lives today, things heat up between Gabi and Jake, Rafe is stunned by what Eduardo says, and a decision is made in the custody hearing. 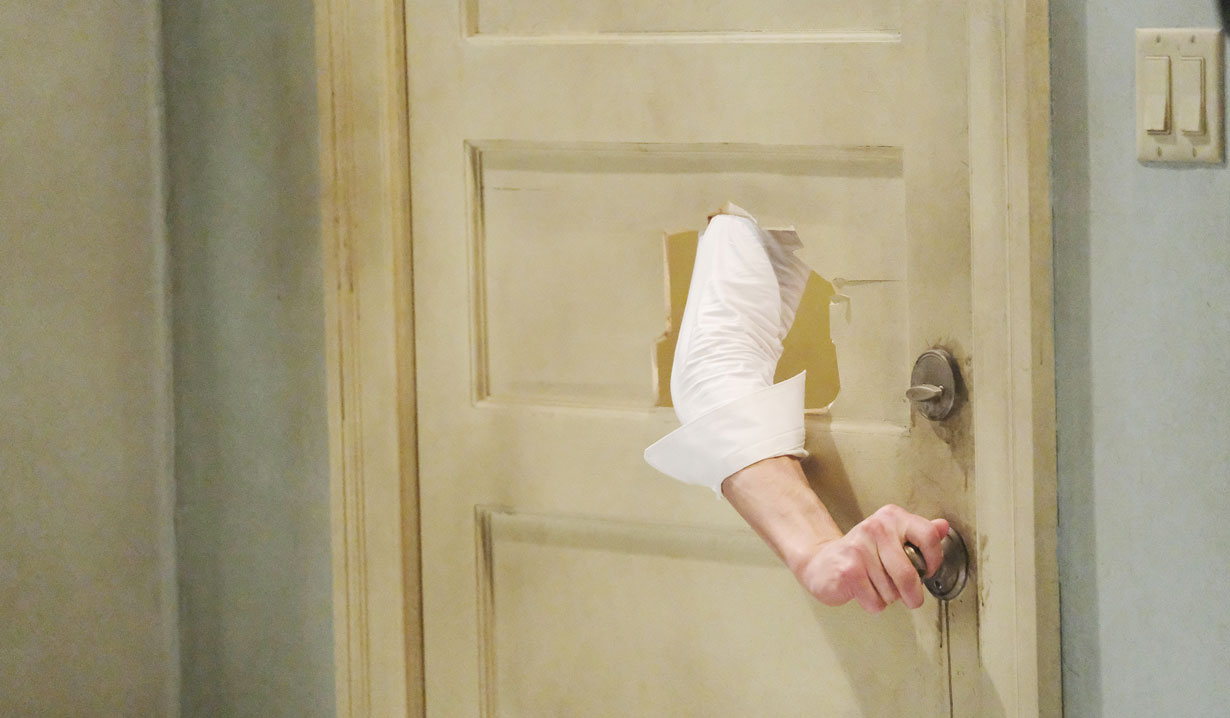 Gabi barges into Jake’s room at the DiMera mansion, holding a suit, and informs, “We’re going to Kansas City.” Jake refuses to attend the business partner’s BBQ and has plans with Gwen. Gabi takes some jabs at Gwen then warns Chad’s working overtime to make sure she doesn’t get control of DiMera. She begs him to help her. Jake wonders why this is so important. Gabi finally admits it’s the only way she can keep her daughter. She explains how Will and Sonny want to take her away – she can’t lose her. “Like your husband,” Jake replies. Gabi takes Jake in a passionate kiss.

In the hearing room, Sami tells Nicole, Eric and Justin she’s representing herself. Justin warns of her taking this on, but Sami’s been in court plenty of times. Nicole invites Sami to make a fool of herself, it’ll be all the judge needs to see she’s unfit. Soon, Judge Duncan (played by Gwen McGee) appears and accepts Sami’s request to represent herself. Justin goes over Allie leaving her baby to Eric and Nicole – and specifically not Sami. Sami’s objection is denied. As the judge looks at Allie’s letter, Sami claims it could be fake. The judge scolds Sami for running her mouth and steps away to read the letter. Judge Duncan returns and announces the letter isn’t legally binding – but it’s what Allie wanted. She awards temporary custody of Allie’s baby to Eric and Nicole. The judge orders Sami to make the transfer as stress-free as possible, but Sami objects to her ruling and claims Nicole’s an unfit mother. Sami talks about Nicole stealing her child in the past – now she’s trying to steal her granddaughter. Justin defends Nicole, but Sami brings up her other crime – murder. 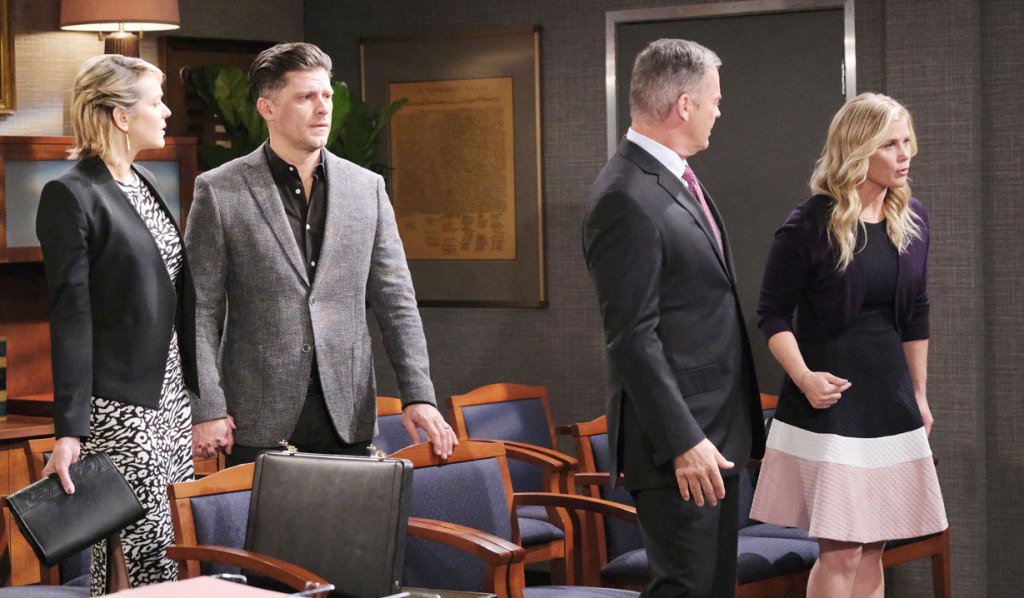 Rafe is stunned to see his father Eduardo in his living room and rants about where he’s been. Eddie calls Rafe judgmental, so unlike Dario, and asks about his criminally inclined sister. Rafe talks about how much Gabi’s lost, leading Eddie to admit he’s in no place to judge. When Eddie hears Rafe has to go take down Eve, he pleads with Rafe to go easy on Eve – she lost a daughter. Rafe turns to leave for work, but Eddie says he has to come with him – right now. They need to get Gabi and head to Mexico to go see their mother. It’s not like Rafe has anything keeping him in Salem. Rafe thinks back to kissing Hope then trashes Eddie as a father. Eddie takes credit for his actions, leaving Rafe to apologize. Eddie’s proud of Rafe, yet he hardly knows him, and says, “That’s on me.” Eddie asks about Hope, and Rafe relays they may have another chance at happiness. Eddie’s happy for him but says they must leave now or they’ll both be dead. 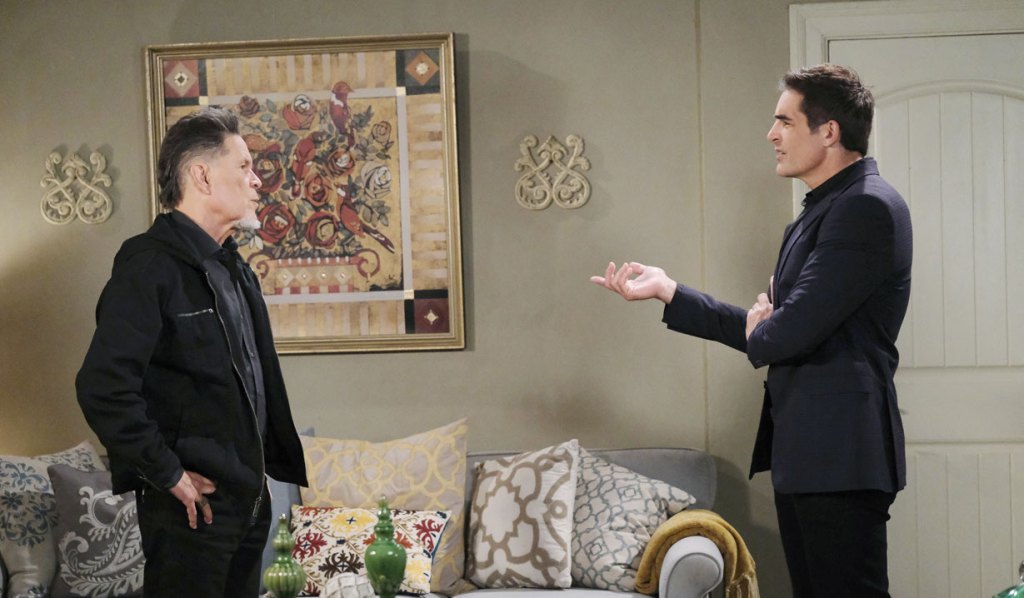 At the cemetery, Hope announces she has a warrant for Eve’s arrest for what she did to Ben. Hope cuffs Eve and says, “Game over.” Eve glances at Paige’s headstone and vows, “Not by a longshot.”

In the abandoned university dorm where Paige was killed, Ciara sobs as Ben says, “I have to kill you.” Ben touches Ciara’s throat and hears Eve’s orders to kill her, as Ciara begs, “Please don’t kill me.” Ben flashes through Eve’s torture and her instructions. Ciara’s stunned to hear Eve’s name and asks when Ben last saw her. Ben takes his hands off Ciara’s throat and tries to remember. Ben grabs Ciara again and throws her cell when she tries to call someone. He pushes her into the bathroom and wraps the necktie around his hands. Suddenly, Ben says he’s sorry, leaves the room and slams the door behind him, screaming for Ciara to lock it and don’t let him in. Ciara begs Ben to call Hope. Though he starts to, he sees their wedding photo on Ciara’s cell and thinks back to Eve’s brainwashing. Ciara hears Ben sobbing, unlocks the door and calls out to Ben, who’s crying on a mattress. He jumps up and screams, “Shut the door,” as Ciara locks it behind her and again pleads for him to call Hope. He picks up her cell, throws it at the closed door then pounds on it until his fist goes through the door. Ben unlocks the door. 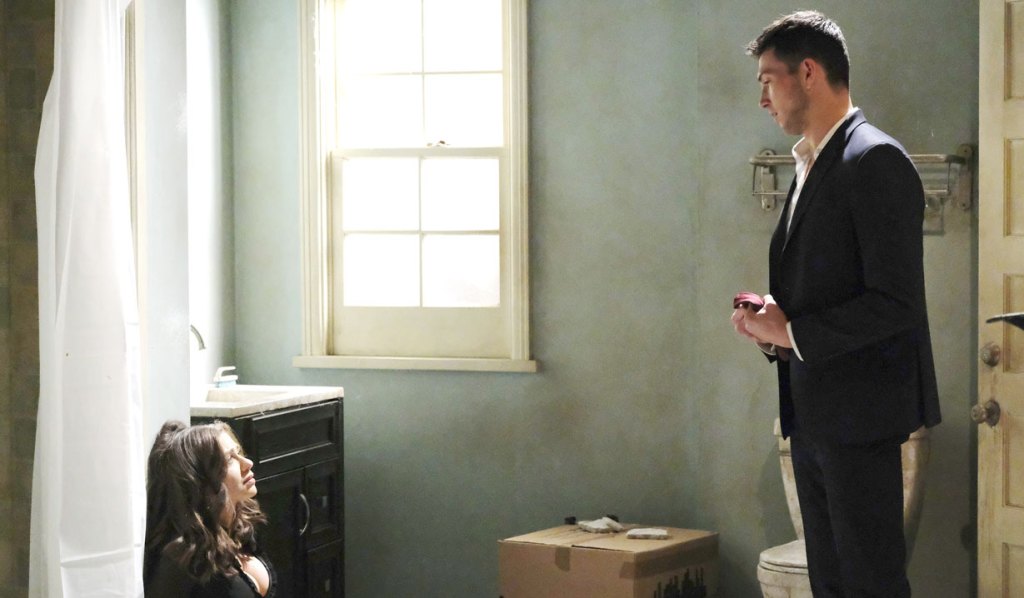 More: Another return for Days actress

At the Salem PD, Eve denies trying to kill Ben – she wanted him alive, to continue his work. Eve admits she had Ben programmed to kill Ciara. Hope doesn’t believe her and listens as Eve talks about Vincent and how good he is at his job. Hope grabs her cell but Eve says, “It’s too late.” Hope can’t get through to Ciara’s cell and puts out an APB on Ben. She grabs Eve and demands to know where they are and vows to kill her. Hope backs away – she knows Eve’s rage, she lost her own son, Zack. Hope cries with understanding and begs Eve not to allow her to feel that loss for a second time. Where are they? Later, Eve talks to a photo of Paige, admits she told Hope where to find Ciara and cries, “I hope it’s not too late.”

Hope storms into a room, with her gun drawn and gasps.

On the next Days of our Lives: Jake and Gabi can’t hold back. 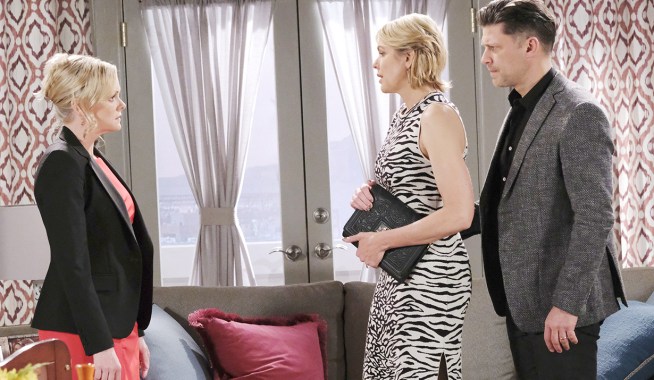 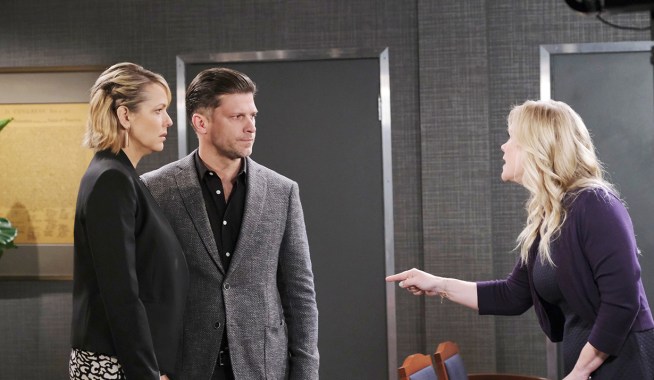