Tuesday August 25, 2020: On Days of our Lives today, Paige's ghost tells her mother off, Belle confronts Sami after Nicole shares her secret, and Ben details how he murdered Paige to Ciara. 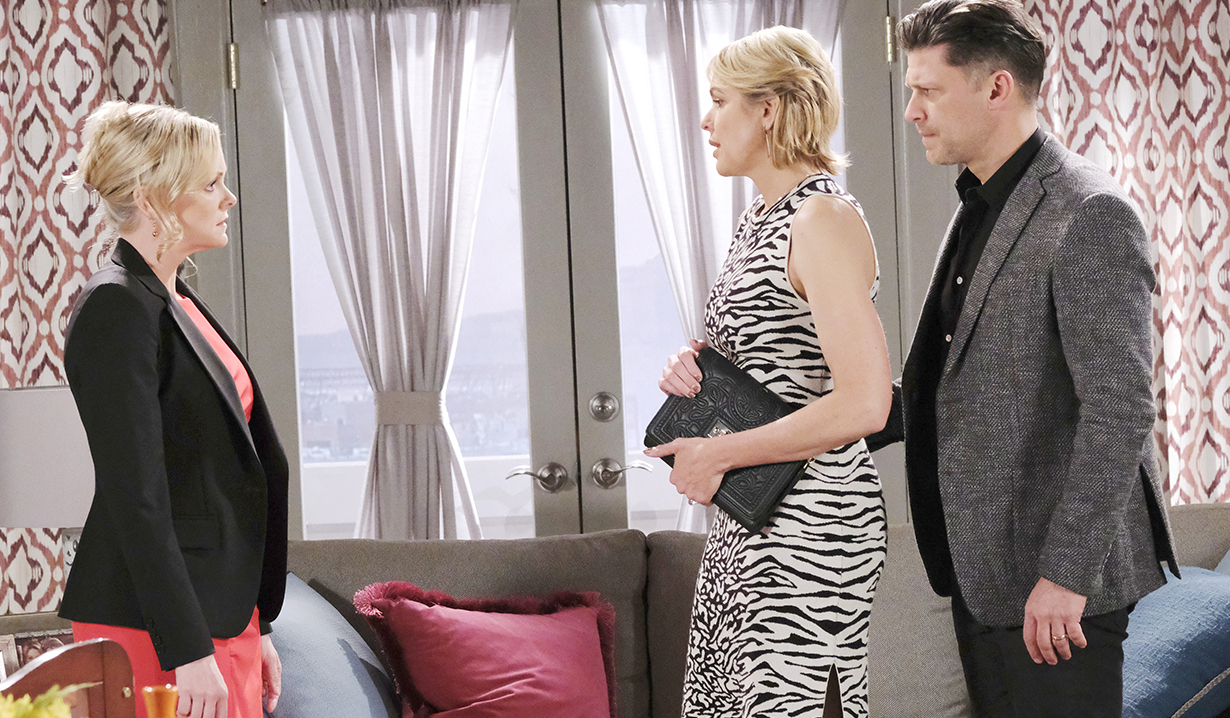 At the hospital, Justin learns from Sami about John’s seizure. Sami appeals to Justin about her grandson. He’s her inlaw and needs to recuse himself from this case. Justin says if it wasn’t for her, Sonny and Will would have adopted the boy. Sami thinks Justin’s punishing her. They debate what Allie does or doesn’t want and Sami thinks her sister will “wipe the floor” with him. 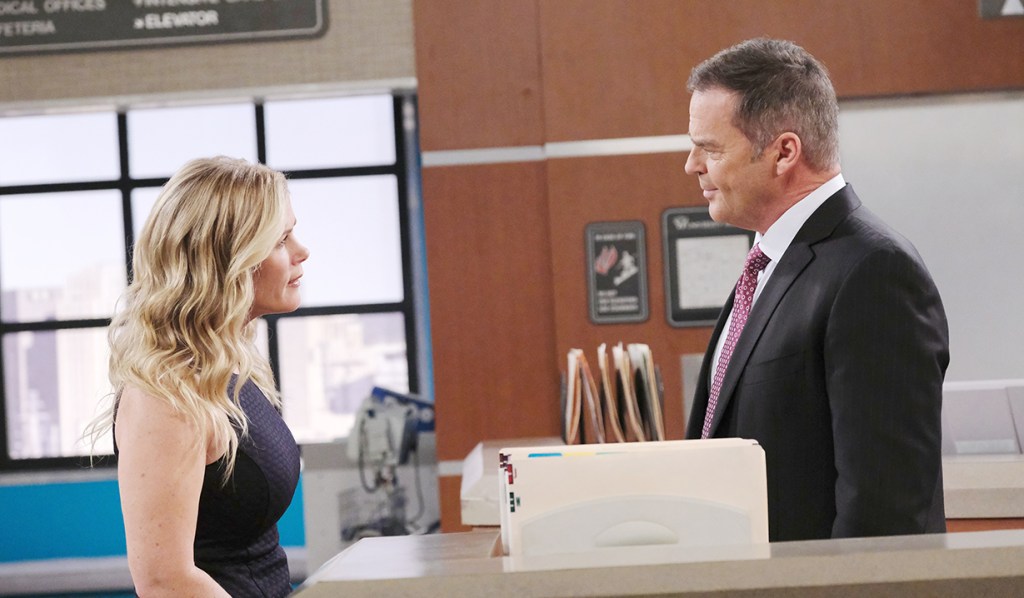 Nicole barges into the townhouse and blabs to Belle that Sami was letting John have it, both barrels when he collapsed. Eric tries to stop Nicole from saying more but Belle asks for more so Nicole details what was said. Belle can’t believe it. Sami and her dad worked out their stuff years ago. Nicole admits she overheard it. “So you were eavesdropping,” Eric says. Nicole overheard her confessing. Eric says what she overheard was private. Nicole doesn’t care about ethics. She doesn’t think Sami should get away with this. Belle knows Sami’s been under stress and probably didn’t mean any of it. Eric agrees. That’s why Sami was confiding in their mother. They need to stop blaming Sami for everything. Nicole reminds them that this is classic Sami. Does Belle really want to represent someone like her? After they go, Sami returns and Belle confronts her about what Nicole told her. Sami’s shocked and calls Nicole a bitch for spying. Sami will apologize to John and she’s sorry. She knows this wasn’t her fault since Marlena explained it’d have happened anyway. This doesn’t make Belle feel better. She cries that what Sami said could be the last words he heard. Sami weeps as she says that won’t happen. Belle winds up refusing to be her lawyer. Sami calls it spiteful.

At the crime scene in Eve’s motel, Rafe and Hope get hot and heavy, making out. Rafe pulls away and apologizes. He feels he took advantage. Hope doesn’t see it that way. Rafe’s confused. Hope’s not sure she wants to keep things professional. Both are so happy with their friendship, yet feel a pull toward each other. They each state that their friends want them to reunite. They try to figure out what they want. Could they make a reunion work? They end things on a good note and Rafe heads out. Hope calls for back up for the hotel while she goes off to find Eve.

At the cemetery, Eve sees an apparition of Paige who once again tells her not to be angry for the rest of her life. She thinks her mom is making a terrible mistake that she’ll regret. Eve says she’s doing this all for her. Paige is astounded. She’s already made him pay. Eve doesn’t think it’s enough. Ben makes her rage out but Paige argues that neither Ciara nor Hope did anything to hurt her. Paige knows it’ll haunt her when Ben kills Ciara on her orders just like it did when her father, Eduardo was a hired assassin. Paige disappears and Hope shows up.

Ben takes Ciara to the abandoned university dorm where Paige died. When Ciara asks, he tells her he strangled Paige. Ciara is shocked and asks why he’d bring her there. “Because somebody wanted me to.” He reveals another psychiatrist told him to. This baffles Ciara but Ben explains it’s the anniversary of her death. Ben says the doctor told him to do something that he doesn’t want to do. Ciara says he doesn’t have to do anything the doctor says. They’ll talk to Marlena. Ben details how he wore a mask when he went to murder Paige and how he chased her into the bathroom when she tried to escape. Ciara’s visibly disturbed as Ben holds his tie and crumbles to the floor as he tells her how he strangled her. He calls himself a monster. He wanted to frame Chad and keep Abigail for himself. Ciara reminds him he was sick and is better. She sobs and tries to get him to leave but he locks them in. He doesn’t want to but has to kill her. Ciara sobs and calls to God.

In the hearing room, Eric and Nicole debate what’s best for Allie’s kid. Justin appears. They discuss the possibility of Belle quitting as Sami’s lawyer. Justin says Sami will have to ask for a continuance if she wants to resume the case. Sami arrives, calls Nic a bitch and says she’s representing herself.

Rafe arrives home and finds someone dressed in a hoodie in his living room. It turns out it’s his father, Eduardo, played by A Martinez.

On the next Days of our Lives: Ciara’s trapped.

Get daily soap news sent to your inbox free with Soaps.com’s newsletter. 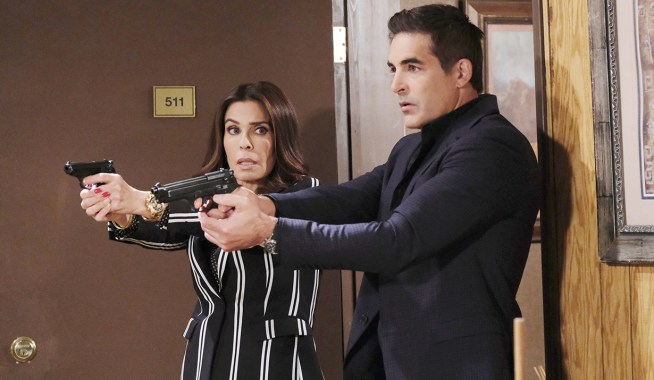 Nicole's Eavesdropping Gives Her Ammunition Against Sami in the Custody Case 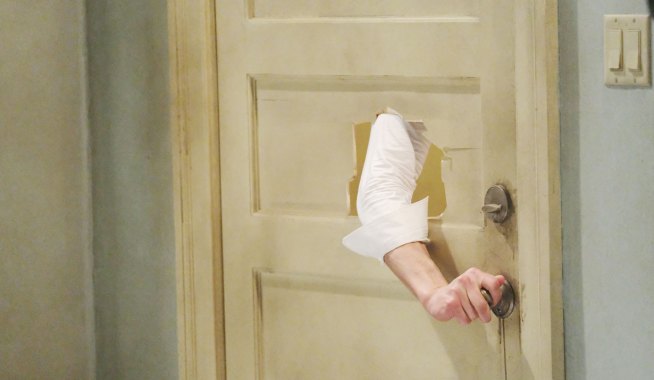