Thursday August 20, 2020: On Days of our Lives today, Jake finds Gwen in a close moment with Chad, Vincent drugs Ben one last time, and Gabi's angry over Will and Sonny's request. 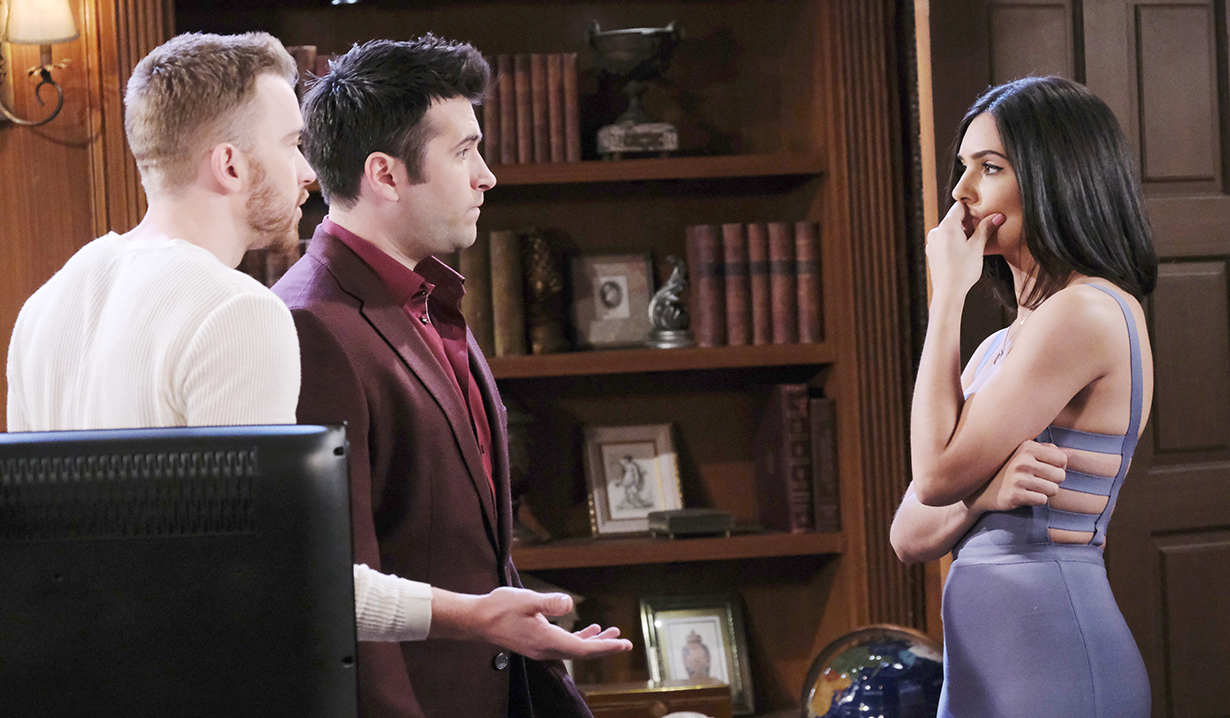 Gwen grabs Chad and drags him into her room at the DiMera mansion. She needs him. She takes off her dressing robe and Chad snaps at her. He told her he’s happily married! She asks what happened with the business deal and he tells her to ask her boyfriend. Chad asks Gwen not to tattle that he was in Kansas City. He says if she doesn’t, he’ll keep Gabi away from Jake. He sits on the bed beside her. If she wants his help, he’ll have to give her what she really wants. Downstairs, Gabi’s work is interrupted since Jake’s watching an old movie in the lounge. She turns off the television and tosses his feet off the sofa. He shrugs. When he gets money he’ll redecorate. He boasts that the client looked at him as if he was the second coming of Stefano DiMera. Gabi snipes at him to worry more about his relationship. She reveals she caught Gwen kissing Chad. Jake goes upstairs to confront Gwen and finds her holding Chad’s face in her hands. “What the hell is this?!” Gwen and Chad put on a show, telling Jake that he’s been lonely. Chad tells his brother to stay out of his business dealings before he takes off smiling.

Meanwhile, Sonny and Will arrive downstairs to tell Gabi the news that they’re moving to Phoenix. She hears all about the job and is proud of them. She’ll make things work with visits with Ari. Will says they were hoping to take Ari with them. Gabi snaps. “The hell you will!” Taking her out of her life, away from her mother – she just started her school year. Will says they’ll bring her after Christmas break. Gabi doesn’t want them pulling her out in the middle of the school year so Sonny suggests she come next summer. He invites Gabi. Gabi signed her up for horse camp. Will says they can do that there. “Ari’s going to have to learn to compromise and so are you.” Gabi tells them not to threaten her. They think they should sleep on it. Gabi apologizes but no amount of sleep will change her mind. “You’re never gonna take away my daughter.” Upstairs, Jake orders Gwen to stay away from Chad. She’ll try but reminds him he’s always running off with Gabi, leaving her alone. How can he blame her for looking elsewhere for attention? Downstairs, Will and Sonny have left and Gabi rants to Chad about them wanting to uproot her daughter’s life. 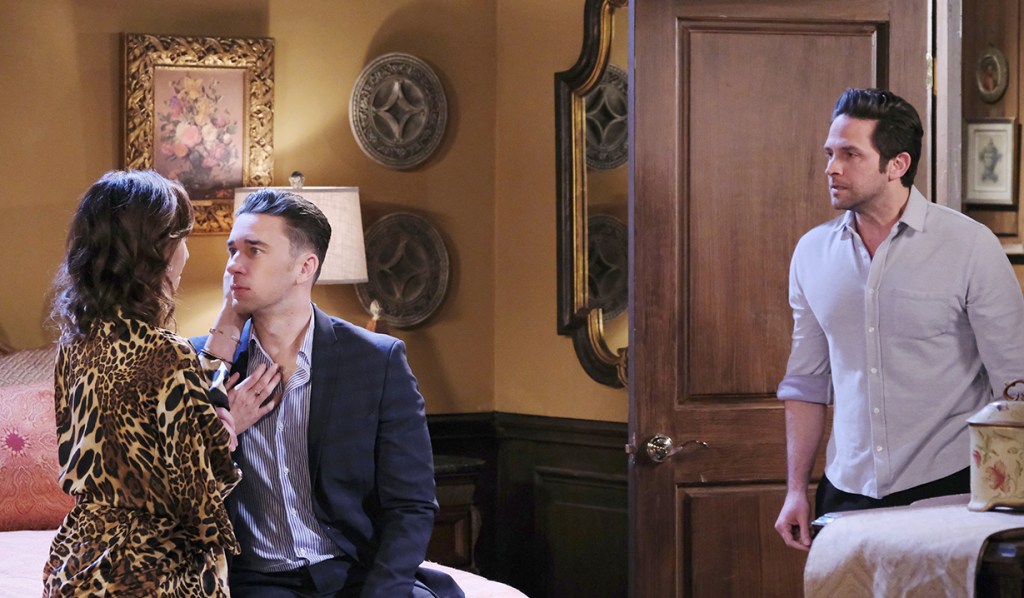 Eve takes off her brunette wig at the crappy motel she’s staying at. She rants about Claire for going to her grandmother after seeing her in the park. Vincent appears and she reveals there’s an ABP out for her arrest. She yells about being cooped up waiting until Ben Weston snaps. Vincent apologizes for not having the chance to give Ben the final dosage but his conditioning will help ensure it’s only a matter of time until he kills Ciara. Eve says tomorrow’s the perfect day for Ben to murder his wife. It’s the anniversary of Paige’s death. Vincent’s sorry to hear. Eve talks about her pain and loss but thinks it’s kismet that Ben will murder his wife on the anniversary of murdering Eve’s daughter. Vincent says he has to inject Ben tonight.

From SPD, Hope calls Ciara to tell her she’ll do what she can to protect her and Ben. They disconnect and Rafe tells Hope to leave for the night. He doesn’t want her burning out on her first day back. Things get awkward as they dance around whatever they’re feeling and thank each other for a good first day back.

At the square, Ben slowly toys with Ciara’s scarf at Mandalay. Ben comes up behind her, frightening her. He looks from the scarf to Ciara, as if in a trance. He snaps out of it and they agree to spend the night at home together. They kiss.

At Salem Inn, Ben can’t get Eve out of his mind. Ciara learns Ben will see Marlena tomorrow. Maybe she’ll be able to help him figure out what’s going on in his head. When Ciara asks him to explain, Ben says he feels like something bad is going to happen and he doesn’t know how to stop it. Ciara tries to take his mind off of it with sex. They fall on the bed, kissing. After sex, Ciara wants a hot fudge sundae, so she has Ben to call room service while she showers. Vincent arrives with the sundae and Ben goes into a daze. Vincent injects him with the last drug and tells him to have a pleasant evening before taking off. Ciara reappears and Ben’s still in a daze. 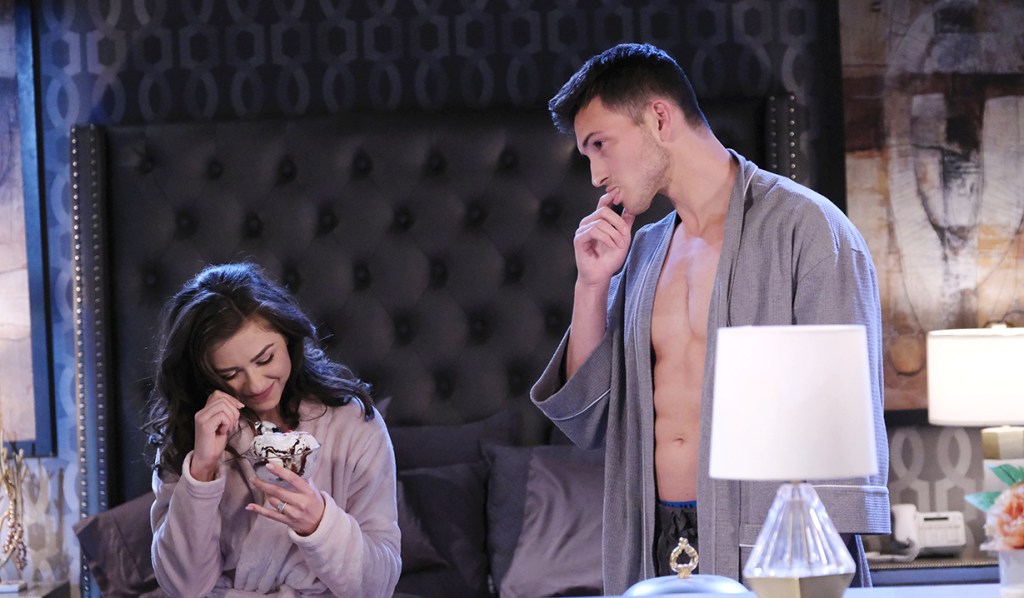 Once Hope’s at home, she calls Rafe. She’s had a little emergency and didn’t know who else to call. She asks him to stop by. Once he arrives, she tells him her washing machine isn’t working. Rafe is taken aback. “That’s why you called me over?” He remembers this happening before. There was a kink in the waterline. He also recalls asking her to get a new washing machine. She asks why she should since she has one that’s working. Rafe reminds her it’s not, but goes to see if he still has the magic touch to fix it. Hope gets out some wine while Rafe works and he starts cursing and yelling. When he reappears, his shirt is soaked. He mustn’t have the magic touch anymore. Hope finds it uproariously funny and tells him to take off his shirt. She looks at his muscles as he does so and takes the shirt to dry. When she returns, they share some backward talk about their feelings for each other. Hope returns his dry shirt and they banter before he goes.

Vincent returns to Eve with good news – he injected Ben.

From home, Will and Sonny say they can understand Gabi’s reaction.

On the next Days of our Lives: Steve sits vigil for John. 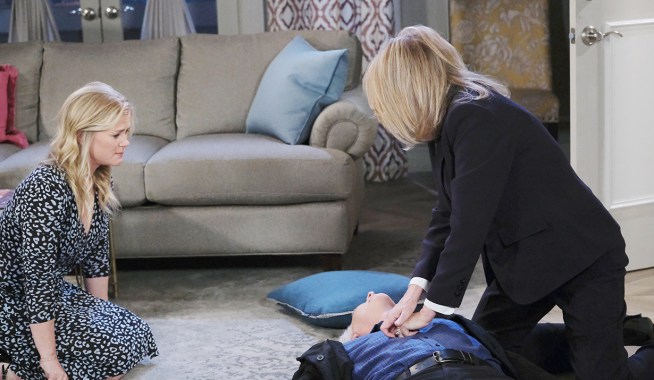 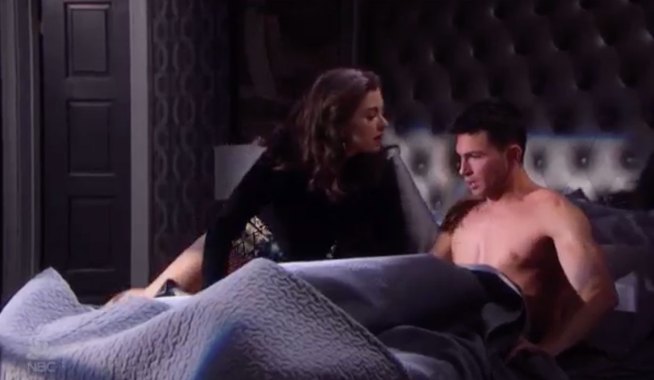