Friday August 14, 2020: On Days of our Lives today, Claire tries to stop Eve, Ben struggles with Vincent, and Rafe welcomes Hope back to the Salem PD. 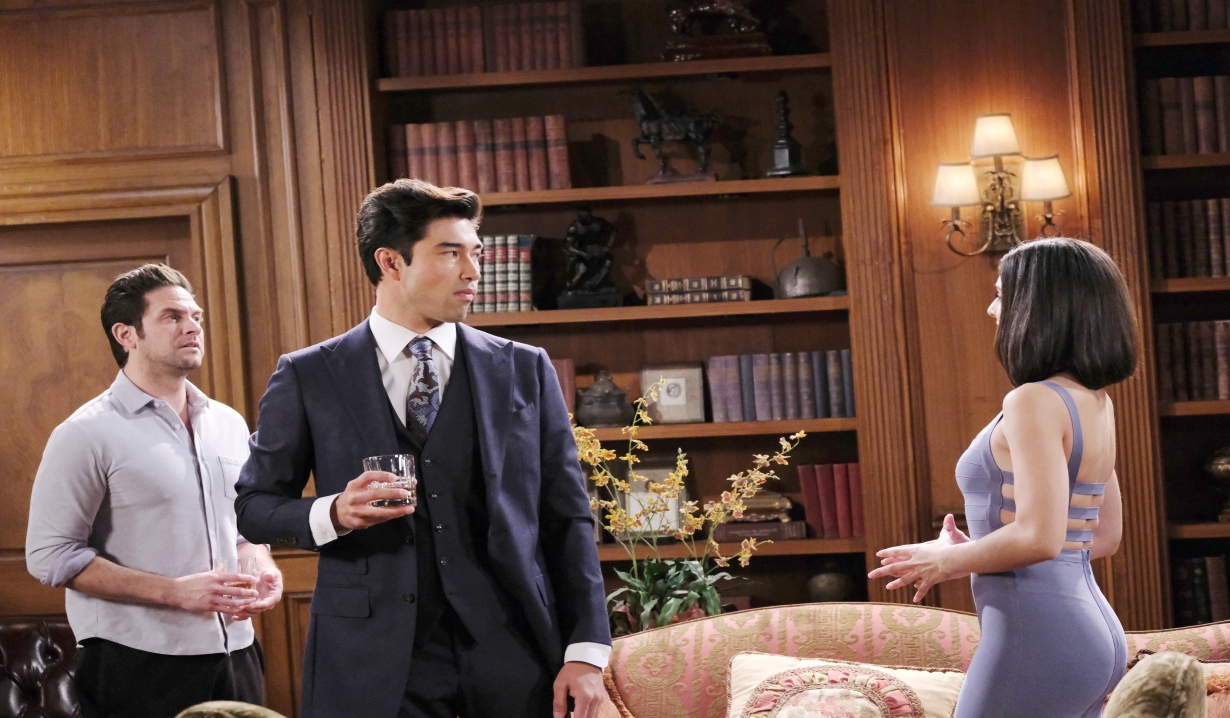 In the park, a disguised Eve calls Vincent and orders him to stop Ben from having his therapy session. Claire stumbles on her and declares she won’t let her hurt Ben or anyone else. When she threatens to call the cops, Eve rips her phone away. She doesn’t know why Claire cares and says that getting revenge on Ben is her duty. Eve reminds Claire that she helped her when she was low and asks her to walk away. Claire can’t let her hurt more people and says she needs help. Revenge won’t bring Paige back, it will just ruin her life. When she calls Eve pathetic, Eve slaps her. Eve shoves her to the ground and storms off. 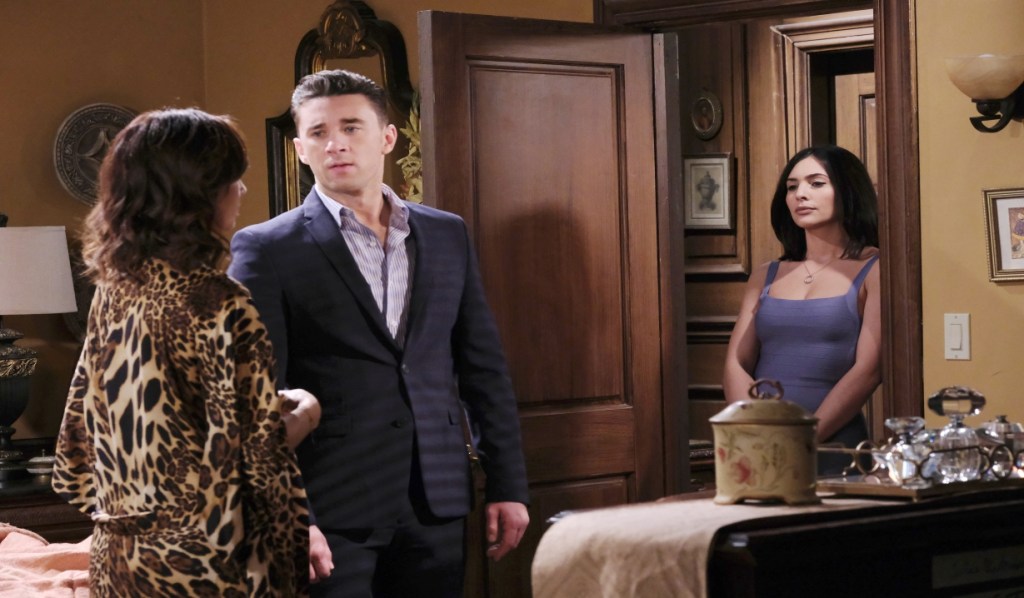 At Casa DiMera, Jake tells Gabi that she has annoyed Gwen. Gabi assumes that Gwen has tipped off Chad about their scheme and rants about her being a tramp. Upstairs in her bedroom, Gwen tells Chad about Gabi making a mess of things. Chad says their arrangement has been good as long as they keep it a secret. He warns that one setback won’t stop Gabi. She’s power-hungry. Gwen will do anything it takes to bring her down. She wants to sweeten her end of the deal, and that means having him in her bed. That doesn’t mean sex. She just wants Jake to catch them and be jealous. He’d rather not get beaten up. When she hears someone coming, she starts kissing him. Gabi arrives, snaps a photo, and threatens to expose them. After she leaves, Chad tells Gwen that this blows their deal. She warns that Jake is smarter than he looks. He’s astonished when he gets a call saying the deal has closed. Downstairs, Shin is drinking with Jake when Gabi walks in on them. He announces that they closed the deal. After toasting, he exits. Jake tells Gabi she owes him some thanks. 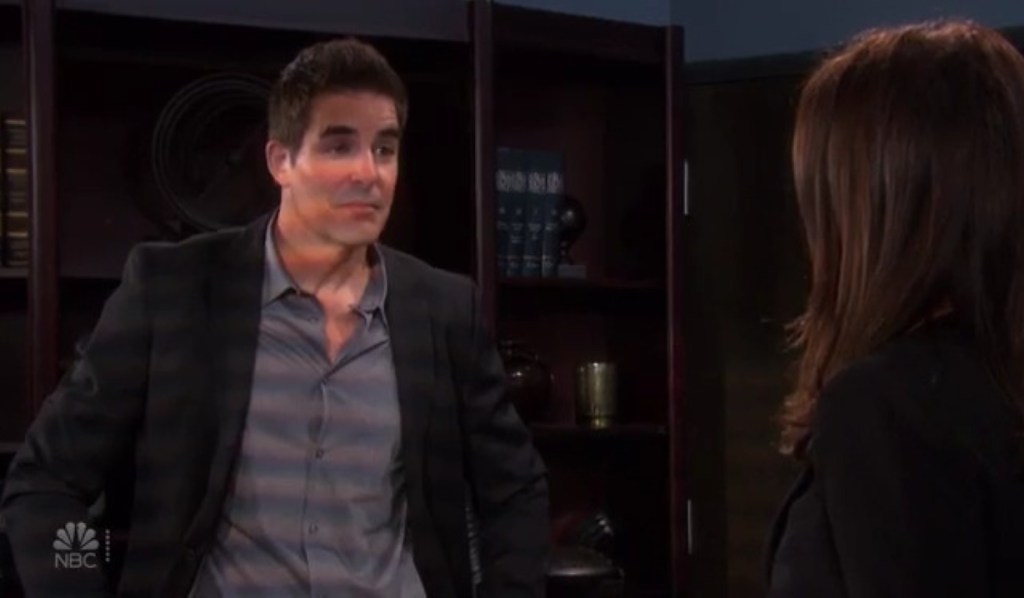 At the Salem PD, Rafe pins Hope’s badge to her pants, leading to an uncomfortable moment. Ciara interrupts. Hope says she just wants to come back and fix the damage she caused. Ciara insists nothing was her fault. She tells Rafe not to let her mom go this time and jogs off. Hopes insists she was just referring to them working together. Rafe thinks they are in a better place. She’s happy about that. He says there’s an elephant in the room, but she won’t see it and tries to talk work. This fails so she agrees to discuss what’s between them. He apologizes that the ‘guy’ in him came out. She likes that guy but says they should just be friends and cops for now. Shaking her hand, he welcomes her back. 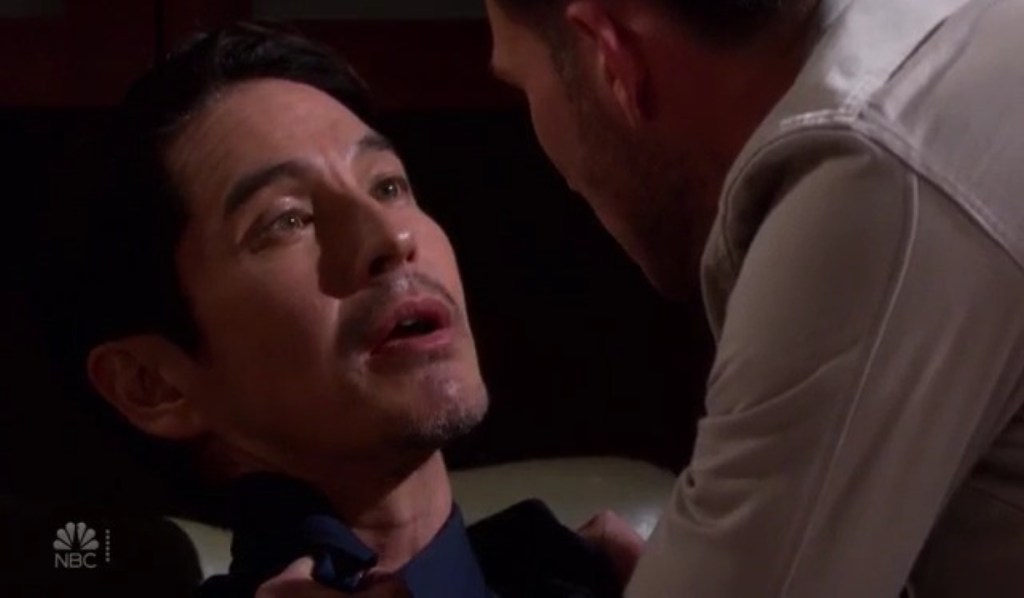 Ben is furious when he arrives in Marlena’s office and finds Vincent there in place of the doctor. Although Ben tries to attack him, he can’t. Ben flashes back to being tortured but he can’t remember everything. Vincent says he won’t remember this either because his unconscious is under his control. He reminds Ben that he’s supposed to kill Ciara. If he wasn’t a psychopath deep down, none of this would work. Weston insists that he will never hurt Ciara, even if that means never seeing her again. “I’m the boss of you,” Vincent says. He pulls out a syringe to inject him with a performance-enhancing drug for psychos. Ben tries to resist. Ciara starts knocking on the door. A moment later, Ben answers the door. She senses something is wrong. He says they should go home and be alone.

As Ben and Ciara walk in the square, he wishes he could have talked to Marlena. He starts to play with her necklace. Claire runs over and says she just saw Eve.

Eve goes to her room at the motel and tells Paige’s photo that Ben will pay. Vincent arrives and tells her the treatment is working but he couldn’t administer the final dose.

On the next Days of our Lives: Eric and Nicole receive a restraining order from Sami.

Take a look at the gallery of surprise career changes of former soap opera stars, including a Days of our Lives alum who is now a pilot, and sign up for Soaps.com’s newsletter to get spoilers and interviews in your inbox daily.

<p>After enthusiastically supporting Donald Trump in the 2016 presidential election, Sabáto (once Jagger Cates on <em>General Hospital</em>) “had to sell everything… to pay all my debts,” he told <a href="https://variety.com/2020/politics/features/antonio-sabato-jr-donald-trump-republican-hollywood-1203521208/" target="_blank"><em>Variety</em></a> in 2020. Eventually, he moved to Floria and took a job in construction. “I’m in the car all day,” he said, “going through all the sites. Five days a week, nonstop.” Note: This is not a photo of him checking the structural integrity of this wall.</p>

Ben’s Taken Aback by What He Finds...