Ben’s Rescued, and When Hope and Ciara Ask Who Did This to Him He [SPOILER] 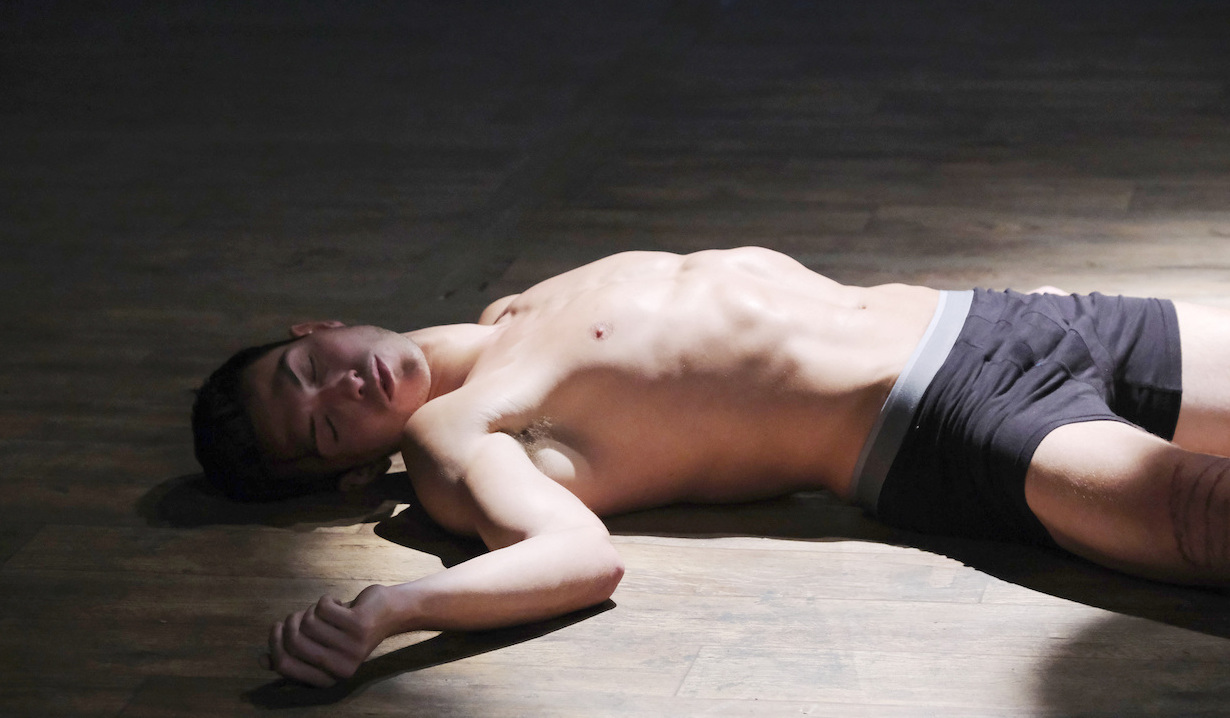 Steve drops by Kayla’s condo with yellow roses. Neither got much sleep last night and Kayla admits she worried he was having second thoughts about moving in. He’s not. They look at a wedding photo and Steve recalls Kayla telling Stevano that seeing him was like someone took his soul. Steve says he only remembers bits and pieces during that time but feels shame. He’s not sure it’ll be in the past for him. Kayla says it wasn’t his fault and she forgives him. He thanks her and then makes an omelet for them. 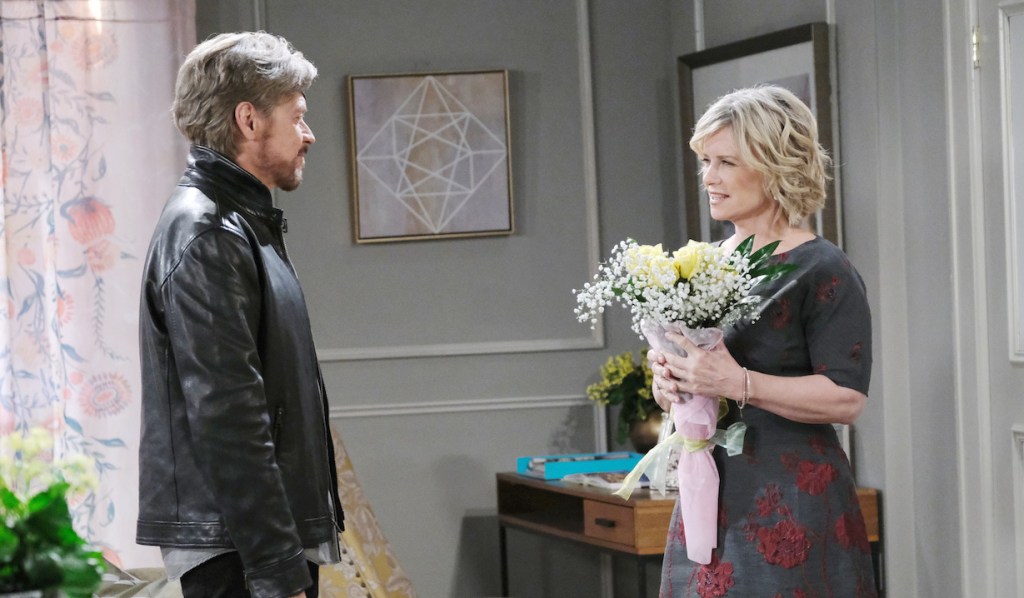 Justin overhears Bonnie yelling at someone on a call at the square about her contract. She sits with him, against his wishes and tells him she’s not getting her royalties because she’s not selling enough books. Justin looks at the contract. Bonnie signed it. Still, Bonnie feels she’s being screwed over. She asks him to act as her lawyer. He’s not interested so she apologizes for leaving Adrienne to rot in jail. She asks him to read her book. It explains her guilt. Justin could never forgive her. He can’t get the time back with Adrienne because of her. Bon Bon goes on about regrets and admits her daughter Mimi barely speaks to her, while Lucas has given her the boot for good. She blubbers. Maybe she should go back to cleaning houses. Justin shrugs. The waitress behind them shakes her head at Bonnie’s antics.

At the hospital, Allie once again refuses to sign the adoption papers for Sonny and Will. She accuses them of plotting with Sami to get her baby. Sonny’s dumbfounded but Will looks guilty. Sonny’s shocked. Allie is upset that he was the only person she could trust in their family, which makes Will tear up. He and Sonny apologize and Allie kicks them out. Outside, Rafe fills Sami in on his discussion with Allie and flashes back as he explains to Sami that he told Allie that if Sami hadn’t have railroaded him into turning Allie down, he might have said yes. But he’d given it thought since then. He’d have said yes for the wrong reasons. It’s too complicated and he told Allie it didn’t feel right. He reminded her she already said yes to Sonny and Will anyway. Allie didn’t listen. Sami and Rafe watch Sonny take off. Will appears and blames Sami for Allie hating him and his husband feeling betrayed by him. Rafe finds Allie in her room ripping up the adoption papers. He’s sorry. “Not sorry enough to adopt my baby,” she says. 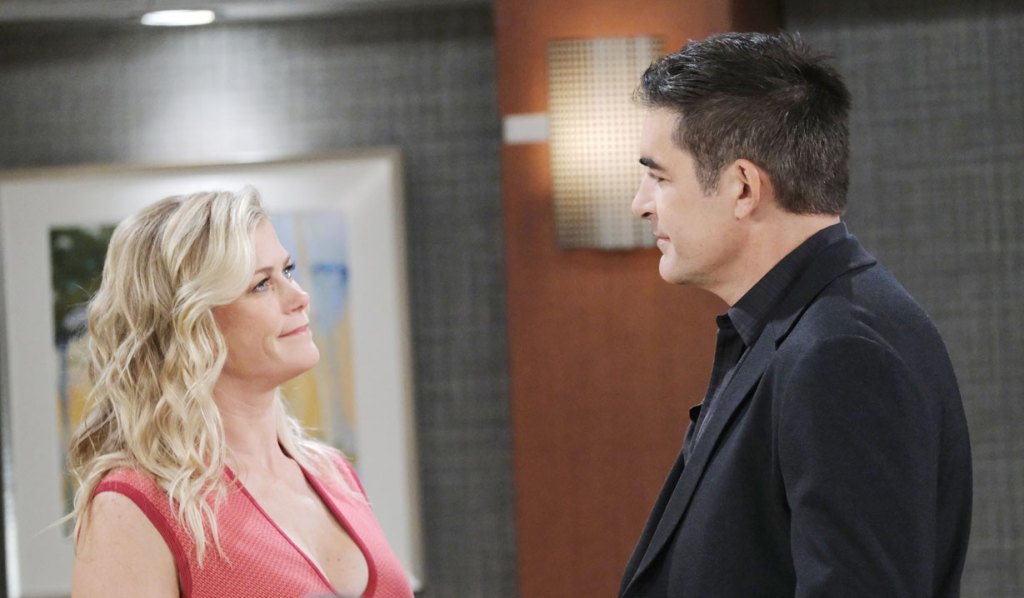 Hope and Ciara see Ben lying unconscious on the floor of the warehouse, alone. Ciara rushes to his side. His breathing is shallow and Hope can’t get cell reception. Finally, he comes around. Ciara cries and she and Hope help him sit up. It’s painful and he cries out. Hope looks at his eyes and asks if he’s okay. He’s out of it and doesn’t talk. When they ask who did this to him he can’t recall. He’s shocked they’re outside of Manhattan, New York, and only recalls their wedding up until the explosion. They flash back and Ben asks if everyone is okay. He learns they’re fine and that he vanished after. Hope goes outside to make a call and runs into Vincent. Hope questions him about Ben Weston but he snipes that he doesn’t have to answer her questions. She detains him with her hand. He tries to tell her to get lost but she demands answers. Did he plant the bomb in Salem? What does he know about the beaten man inside? When Vincent tries to grab her, Hope lays the smackdown and flips him to the ground. He’s unconscious, so Hope ties his hands together and leaves. Back inside, with Ciara’s prompting, Ben recalls Vincent as the one who planted the bomb and says Eve was there. He starts to fill in the details of Eve wanting him to pay for killing her daughter. Ciara embraces Ben and he sees the necktie near the door…

Sonny finds Justin at the square and tells him they’re not getting Allie’s son.

On the next Days of our Lives: Eli & Lani demand the truth.

Get the soap news, spoilers and interviews in your inbox daily with Soaps.com’s newsletter. And take a look at today’s photo gallery of everything that went down in Salem.

<p>Ben lies passed out in the warehouse for Ciara and Hope to find. All part of Eve’s plan?</p>

<p>Hope and Ciara finally find Ben in the warehouse. He’s bruised and battered but alert. Meanwhile, Eve is nowhere to be found and Ben can’t recall what happened.</p>

<p>Ben and Ciara share a tender moment. Their first since the bomb interrupted their wedding. That’s all Ben remembers so far, the wedding and the explosion.</p>

<p>After finding Ben, and Ben starts to remember who kidnapped him, Hope fights Eve’s henchman Vincent. He ultimately proves no match for her. Watch the <a href="https://soaps.sheknows.com/days-of-our-lives/news/574284/days-of-our-lives-kristian-alfonso-fight-video-hope/" target="_blank">behind-the-scenes video</a> of this scene.</p>

<p>After a struggle, Hope overpowers Vicent and restrains him. He comes to when she’s off making a call.</p>

<p>Allie talks to Rafe about the possibility of him adopting her baby. Now that she knows Sami plotted to keep him from doing this, she can’t help but wonder if Rafe really does want to raise her son. But… he won’t.</p>

<p>Allie confronts Will over knowing Sami pressured Rafe to not adopt the baby. Sonny’s caught in the middle and furious with his husband. He feels betrayed and Will blames Sami.</p>

<p>After Sonny storms out of the hospital, Will confronts his mother. Will tells Sami it’s all her fault. Allie hates him and Sonny won’t speak to him.</p>

<p>Steve brings Kayla flowers. They strengthen their bond now that they’ve been reunited and move in together.</p>

<p>Bonnie asks Justin to be her lawyer. Justin is not receptive. He’s got her number and knows what she did to Adrienne.</p> 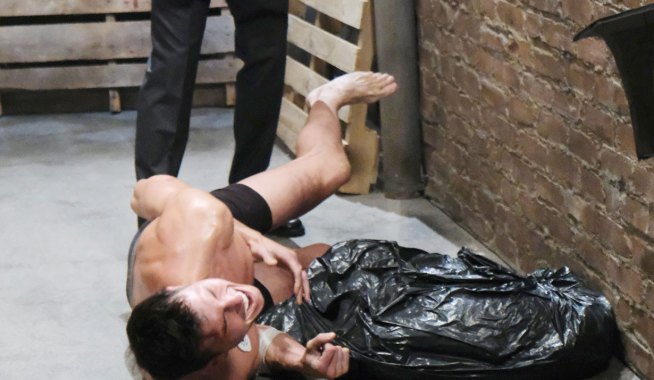 When Gwen Spies on Gabi, She Rages Over What She Finds 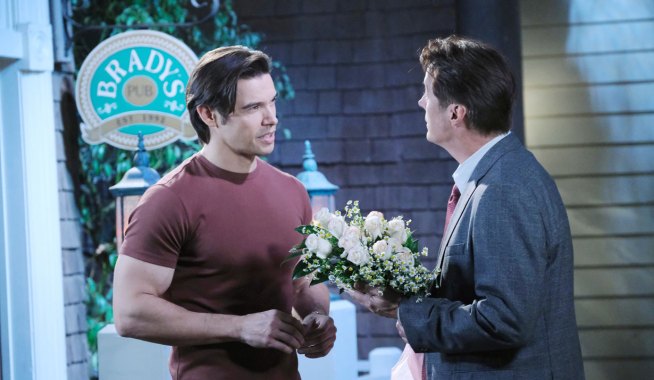