Tuesday August 4, 2020: On Days of our Lives today, Chloe sheds some light on how much Eve has changed, Ben is drugged some more when his brainwashing doesn't work, and Sonny blasts Sami for plotting. 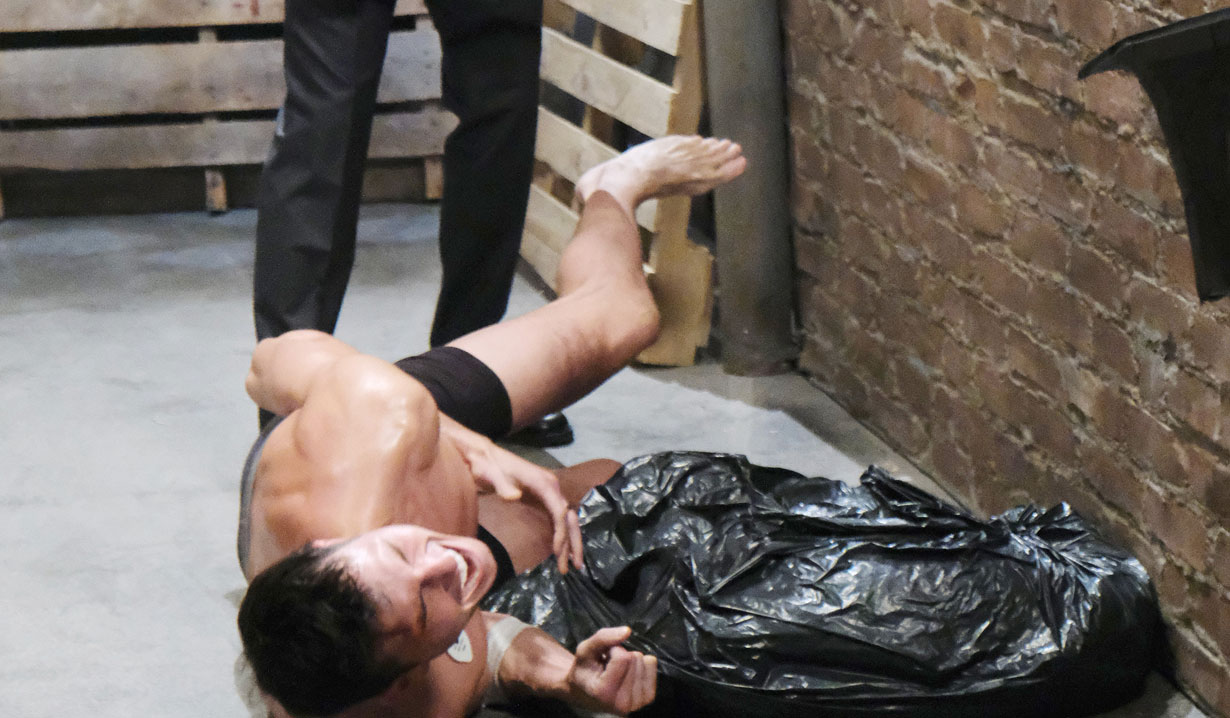 In Allie’s room, Allie is happy Lucas is with her but reiterates she doesn’t want Sami anywhere near her because her mom is disrespectful. She tells Lucas about Sami talking Rafe out of adopting her baby. Lucas looks away, feeling guilty. He admits he found out after the fact. Allie asks why he lied. Sami swore him to secrecy. He didn’t want to upset Allie. Allie snipes that Will’s the only one who is there for her. She gives Lucas the boot. By the hub, Sonny goes off on Sami for screwing up. Why didn’t she call them last night? Sami was excited about the birth of her grandchild. Sonny shows her adoption papers that Allie refused to sign since Sami’s involved. “We know that you bullied Rafe into dropping out of the adoption.” Sami’s mouth drops open. “Nicole told us,” Will says, throwing his mama under the bus. Sami blames Nicole but Sonny blames her. Sami also hurt Arianna, because they told her she was going to have a sister. Sami stammers and then asks, “How is this my fault?” She claims Allie does what she wants. From behind Sonny, Will looks mortified. Sami shakes her head as he tells Sonny he has something to say…Sami interrupts. She thinks Allie will make the right decision.

From SPD, Rafe gets Nicole’s text, telling him about the birth of Allie’s child. She says it’s not too late for him to change his mind. Hope calls from outside of .COM in New York City. She learns about the birth and is surprised Rafe’s not adopting the baby. Rafe doesn’t want to talk about that so she switches gears. They think they have a lead on Eve. She’ll call him when they know more. They disconnect and Allie calls to summon Rafe to her bedside. 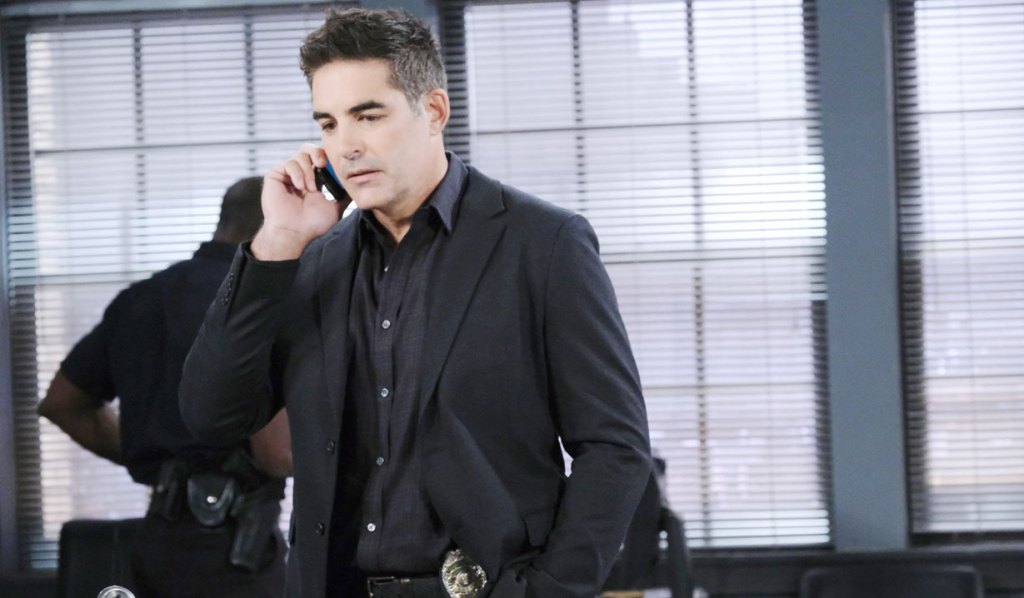 Inside at .COM, Chloe’s just been told about Eve’s machinations as Hope walks in. Chloe has a hard time believing Eve would do this but admits they’re not close friends. They just share music in common. They haven’t spoken since January. Chloe noticed she’s changed. She’s always had a dark side but she always had kindness and humor in her. She didn’t have that light inside her anymore. It was hard to be around Eve who had become so bitter. She wanted to avenge Paige’s death. Chloe’s starting to think it’s possible that Eve has Ben. She urged Eve to get help after one drunken night where Eve raged out at a bar. She refused and Chloe decided it was too toxic to be around her so she distanced herself. When she saw her again, Eve suddenly had a purpose – a man in her life named Vincent at Daybreak Clinic. Hope and Ciara go off to the clinic while Shawn, Chloe and Claire stay behind until Chloe has to pick Parker up. 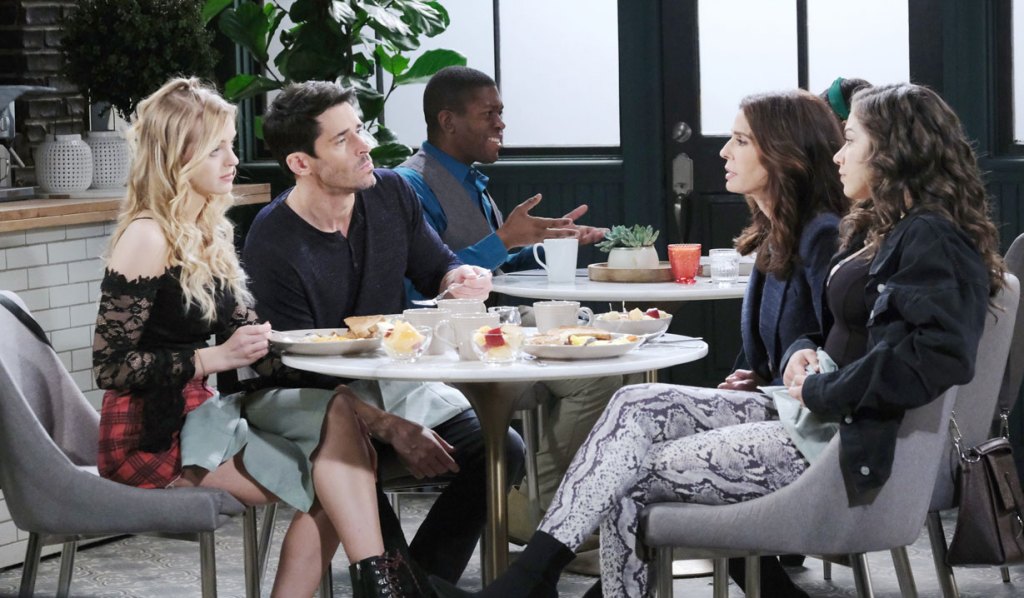 At the warehouse, Eve orders Ben to kill Ciara. Ben is pained and sees Ciara telling him she knows he won’t hurt her because he loves her. He’s horrified. Eve’s antsy, until Ben ties the tie around the mannequin. He cries. The Ciara hallucination tells him to run. He doesn’t get far. Vincent follows him with a prod and whips him. Vincent’s never seen anything like this resistance. He must be crazy about his wife. Eve barks that of course, he is. He just married her! They need to intensify his treatment. Ben has trouble staying conscious. They drag him back to the bed and strap him in and then drug him. Eve yells at him for killing her baby girl and deserving to die. Ben yells out to kill him, then. She wants to but it’d be too easy. She plays music that Paige wrote – just before Ben killed her. Ben says hurting Ciara won’t bring Paige back. Eve screams that she knows the pain will never go away. They torture Ben some more.

Rafe arrives at the hospital and Allie confides she knows Sami talked him out of keeping her baby. Rafe didn’t want to upset Allie by telling her and besides, it has been a challenge, being without David. Allie still thinks Rafe would make a good father. Lucas finds Sami looking at their grandson. Sami’s sorry when she hears Allie’s upset with him. He goes to find someone to let them hold the boy. Sonny and Will go to Allie to try to get her to sign adoption papers.

Hope and Ciara arrive at the warehouse. They find Ben’s black tie and head inside where they gasp at what they see.

On the next Days of our Lives: Bonnie has a proposal for Justin.

<p>Eve instructs Ben to strangle the Ciara mannequin with a necktie. Before his eyes the mannequin comes to life and turns into Ciara in her wedding dress. Ciara urges Ben to run.</p>

<p>Once again Vincent begins to beat Ben with a rod. Ben tries to escape and is put out with the trash.</p>

<p>After speaking with Chloe in New York, Hope and Ciara head off. Shawn stays with Claire for some father-daughter bonding time. </p>

<p>Hope and Ciara go looking for Ben. They come upon a disturbing scene.</p>

<p>After learning Sami talked to Rafe about not adopting Allie’s baby, Sonny’s furious. He accuses Sami of meddling in something that was none of her business. </p>

<p>At the Salem PD Rafe takes a call from Hope. He also learned from a text from Nicole that Allie gave birth to a baby boy.</p>

<p>Sami is desperate to make things right with Allie. Rafe arrives as Sami’s life is once again in turmoil and it’s her own doing. </p>

<p>Lucas arrives at the hospital after learning he has a grandson. He tells Sami he warned her about meddling in Allie’s life. Allie is furious with her father when she learns he knew what Sami was up to.</p>

Eve and Vincent Use Drugs and Shock...

Ben’s Rescued, and When Hope and...

The Good Doctor Fall Finale Recap: Say a Little Prayer for Me