Friday July 31, 2020: On Days of our Lives today, Allie delivers her baby, Claire figures out who kidnapped Ben, and Chad gets Gwen to spy on Gabi for him, so they can take her down. 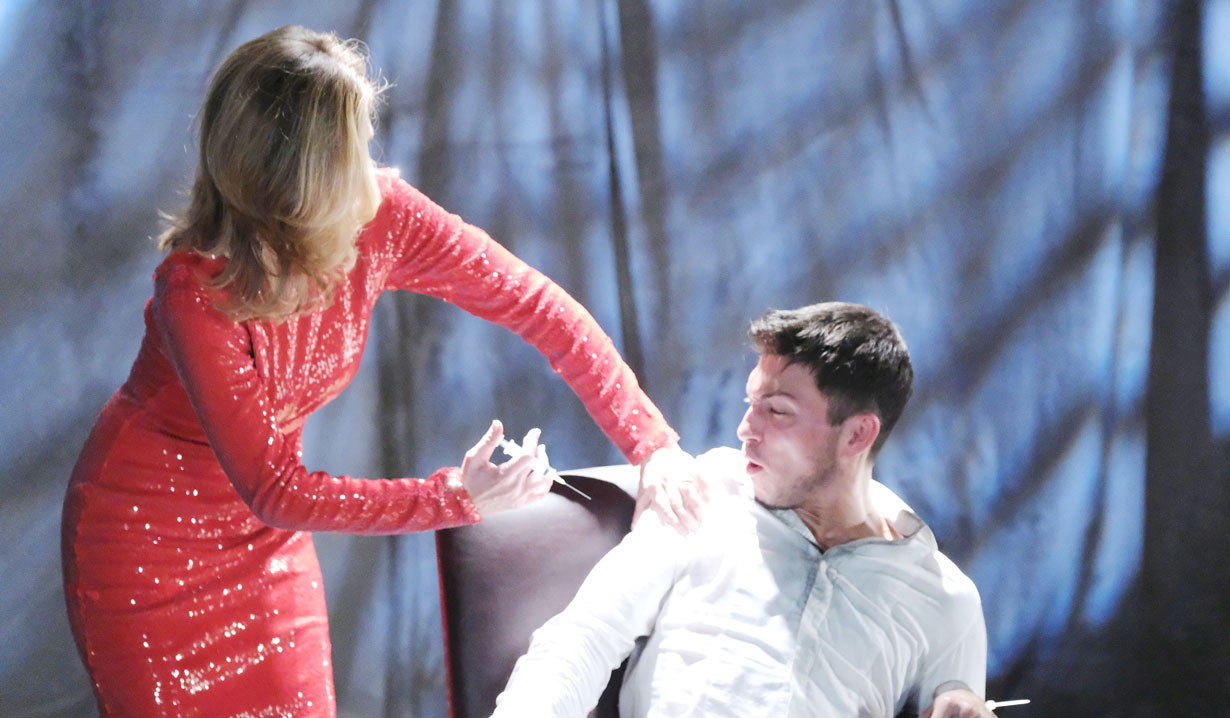 At the hospital, while Nicole and Sarah coach Allie through the birth of her child, Sami rants to Eric about not being chosen as her daughter’s coach. Eric calms Sami down. Back in Allie’s room, she starts pushing and screaming until the baby is born. It’s a boy. Sarah asks if Allie wants to hold him. She decides not to and asks the NICU nurse to take care of him. Once he’s gone, Allie cries. She really did want to hold him. Sarah goes to tell Sami and Eric the good news and Sami cries happy tears. She goes to see him. Meanwhile, Allie cries, worried Nicole thinks she’s a bad person for not holding her baby. Nic doesn’t. They hug and Sami and Eric appear. Allie asks for Lucas and says she never held the baby. She asks Sami to go. Sami’s hurt but will never give up on her daughter. She goes to see the kid. 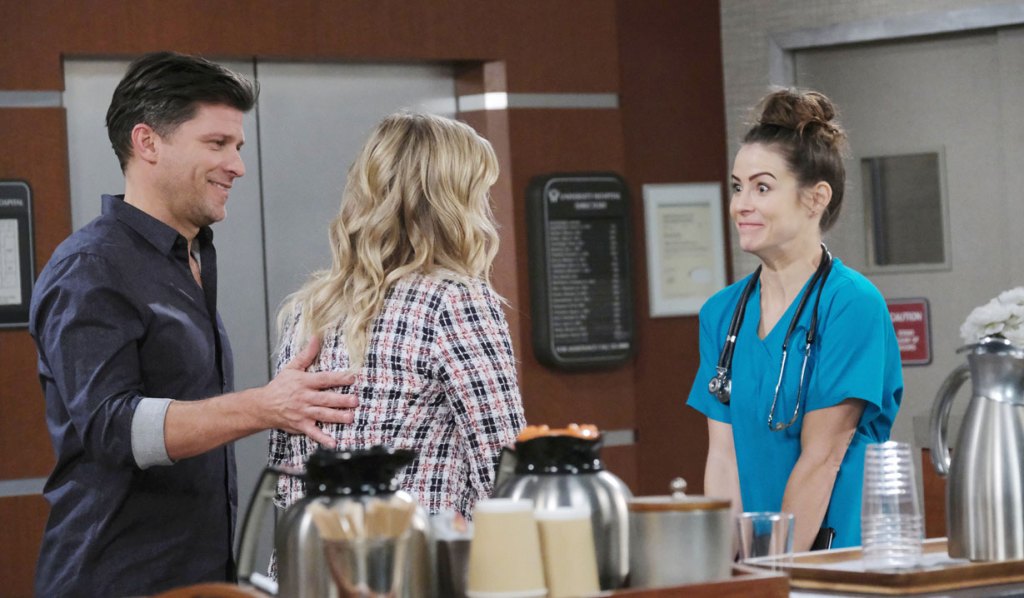 Jake greets Chad – his brother, for the first time. Chad’s sorry to stare, but he looks so much like Stefan. Gabi refuses to let Gwen move in. She gloats that she and Jake went on a date. Gwen knows but they weren’t together at that point. They are now. She rubs it in Gabi’s face that they had sex. Gabi sneers while Chad chuckles to himself with glee. Gabi says this isn’t the back alley of some dive bar. She asks them to have a little respect. They’re grossing her out. Chad has no issue with them moving in, which pisses Gabi off more. He has no say! She only lets him live there for his children. Chad ignores her and tells them to go choose a room. They choose one that’s already being occupied – by Lucas. Gwen doesn’t give a care. She sees Bonnie Lockhart’s book and sits down to read. She’s been wanting it for a while. Jake sighs. Downstairs, Gabi wonders what would happen if Jake wanted the CEO position? Chad isn’t worried. He likes Gwen and her accent. Gabi snipes. “No, you don’t!” She doesn’t. Chad accuses her of being jealous and goes to see if he can help get them settled in. Chad brings towels as Gwen reads, “This is the ultimate scam. Get it, Bonnie!” Gwen tells Chad about the book and lets her know Harold will get her anything else she needs. She asks if that’s his manservant. Chad corrects her. That’s not what they call him. They gossip over hating Gabi and Chad asks Gwen to spy. Gwen’s into it. Downstairs, Gabi thinks Jake’s naive and will twist his arm to marry her, once she forces him to go after the family fortune. Jake defends Gwen and says he hasn’t even figured out what he wants. As they talk, Gabi thinks Jake reunited with Gwen as a default, not because he wants to be with her. Gabs warns that Chad has an agenda. Jake knows. His eyes are open.

More: Camila Banus leaving Days – but for how long? 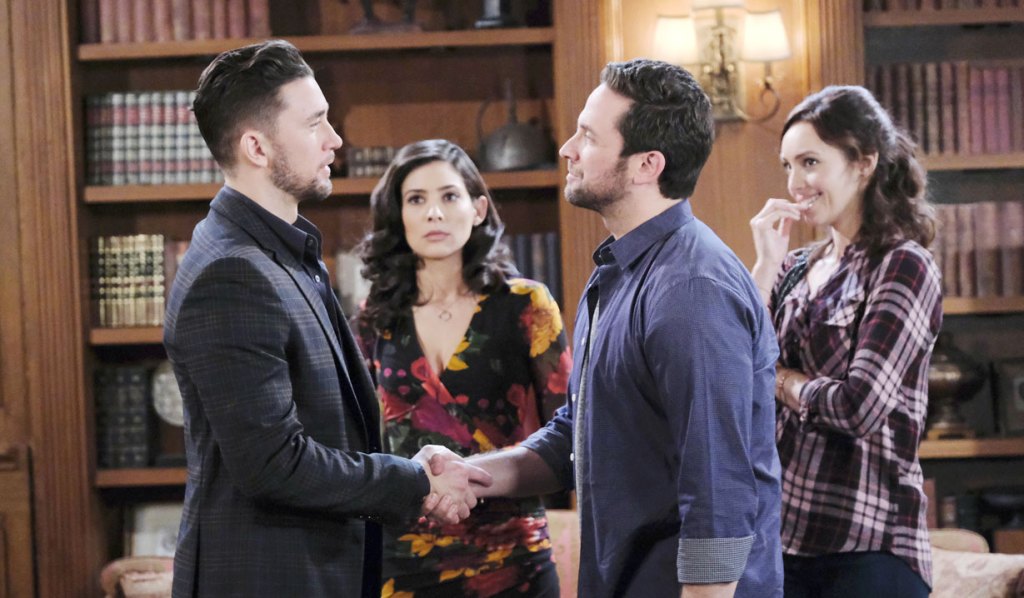 At Salem Inn, Ciara thanks Claire for helping her search for Ben. They make a list of suspects but wind up ruling out Clyde and Orpheus, Pop Pop (Victor), and Sonny. Claire asks if Tripp makes their list and while they talk, she wonders if it was JJ. What if he’s back on drugs? She recalls him almost shooting Ben to avenge Paige’s death. He flew to Italy to avenge Haley’s death. Ciara can’t see it. He’s a good person. Suddenly, Claire comes to a realization. Eve Donovan did this! Claire reminds Ciara that Eve tried to pin the fires that Claire set on Ben, and now she’s trying to frame Claire for her own crimes! They run to find Hope who knows where Eve is. 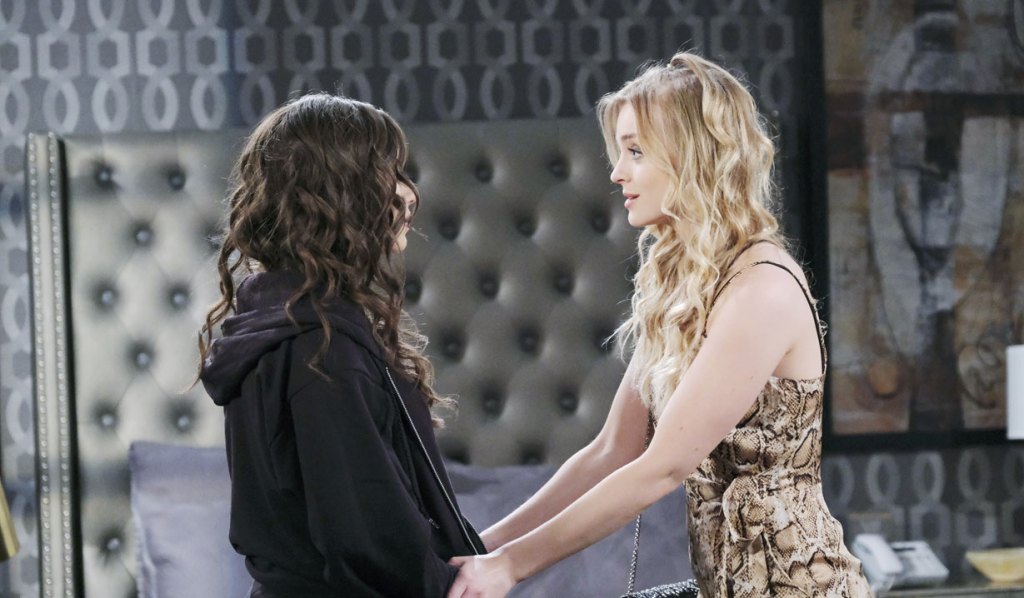 At the warehouse where Eve’s holding Ben, she details to him how he’s going to kill Ciara. With his own bare hands. She doesn’t want to get her hands dirty. Ben rants about her bombing the church but she tells him nobody got hurt. Eve brings up the people he murdered and forces him to say Wendy’s name. Eve tells him he’ll strangle Ciara the way he did “my Paigey.” Ben doesn’t have it in him, he swears, but Eve says he will when she finishes with him. Eve tells him his sister Jordan was right. There is evil in him. And she plans on turning him back into the Necktie Killer. Eve grabs a wooden staff and pokes at him. He cries out and he learns she’s going to brainwash him. She tells him Vincent knows how. She leaves and reappears with a syringe and injects him with something to get him ready for tomorrow. “When the real fun begins.” Ben panics.

On the next Days of our Lives: Sami confides in Belle.

Eve and Vincent Use Drugs and Shock...

Bobby Bones Hints Katy Perry & Orlando Bloom Secretly Got Married: ‘I Did Not Go To The Wedding’

Who Killed Sara?: The 6 Bats—t Twists That Have Us Excited for Season 2