Eve Horrifies Ben With Her Sick Plan for Ciara

Thursday July 30, 2020: On Days of our Lives today, Chad and Gabi are at odds when Li Shin winds up working with Gabi on company business, Ben's shocked that Eve's behind the bombing and kidnapping, and Allie goes into labor. 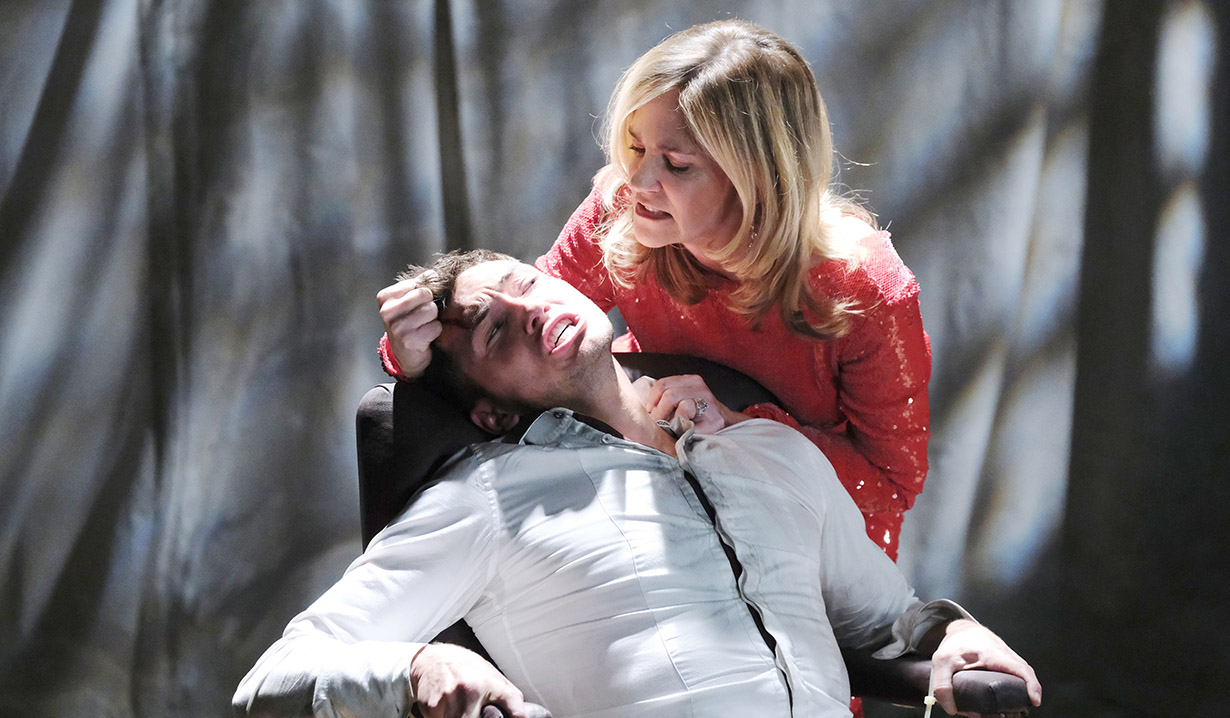 At Eric’s, Allie goes into labor. Sami helps her breathe through the pain. Sami assumes it’s Braxton Hicks since she’s only 8 months along but Allie’s water breaks. Sami yells that it’s too soon and Allie snaps to stop yelling at her. They pack her a bag and Sami keeps up the snarking. Allie’s contractions are six minutes apart. They head to the hospital.

Gabi lets Li Shin (Remington Hoffman) into the DiMera mansion. He talks up how indebted he is to her after what she did for his company today. They toast to their success until Chad interrupts, back from Florida. If he had known Li was coming he’d have been back sooner. Li smiles at Gabi. She saved the day. Chad fakes a smile. Li calls Gabi charming and a natural salesperson. She secured the investor. Chad’s relieved but takes a chance to remind Li of why she was fired in the first place. Gabi reminds him it’s more important for him to take care of his sick wife in Florida than DiMera. Chad reminds them his wife is sick because of Gabi but Li knows she was found innocent. He kisses Gabi’s hand, glad to see her. He calls her stunning and goes. Chad’s shocked to hear Gabi was at Ben and Ciara’s wedding and that she and Jake are friends. Chad asks what her angle is. Gabi has none. He assumes she’s going to make a play for Jake behind Gwen’s back. Gabi’s not into him. 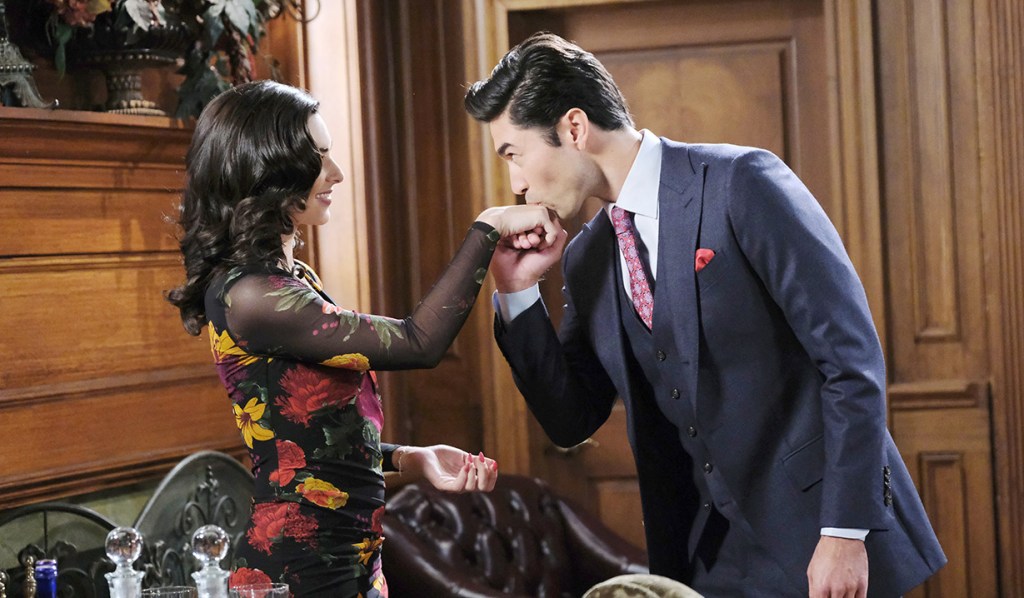 Jake finds Gwen in his garage room. She’s moved in and asks where the hell he’s been. He explains he was searching for Ben. She massages him and wonders “what kind of sicko bombs a wedding.” He admits he thought the mob was after him at first. She asks why he didn’t come home to check on her and he cringes as he says he was helping Gabi. This annoys Gwen and she’s positively angry by the time he explains he invited Gabi as his plus one. She thought she was his girlfriend. He reminds her they only “slept together” once. This is happening too fast, including her moving in. He admits he and Gabi have become friends. Gwen’s paranoid that they’re having sex and Jake blows up. They yell, she’s hurt, and once things calm down, she kisses him and gets him into bed. They have sex. After, she reminds him he’s Jake DiMera, heir to the DiMera fortune. She thinks he should move into the “ancestral home.” She reveals that his brother Chad took her home drunk. Jake raises his voice in anger but she says nothing happened. She packs her things.

Ciara makes a call to Hope to let her know that Orpheus isn’t responsible for planting the bomb. She heads inside Salem Inn and finds Claire. She’s not happy to see her but Claire wants to help find the real bomber. Ciara accepts her help. 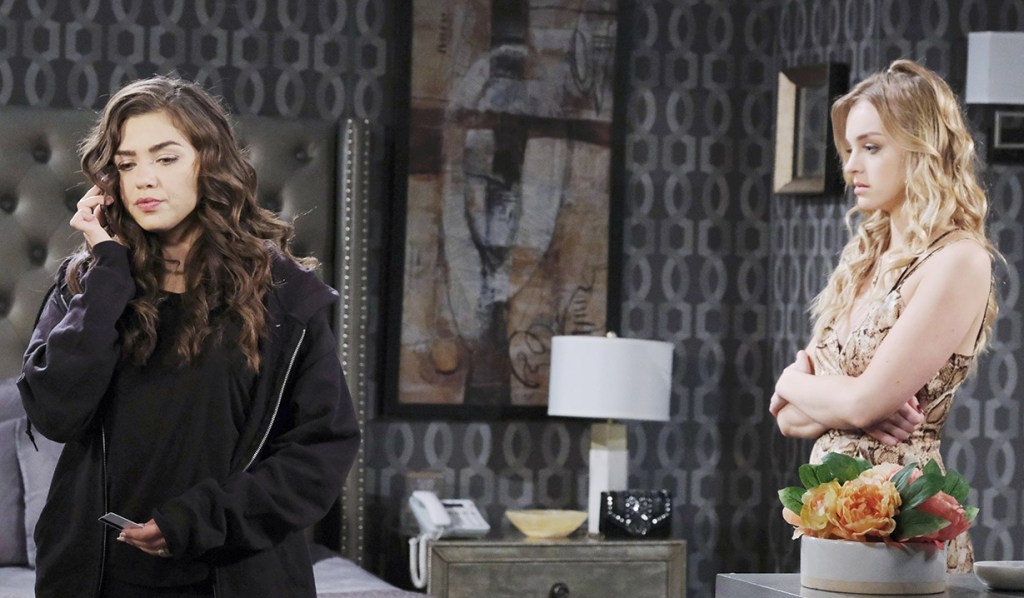 Ben’s astounded to see Eve Donovan is his kidnapper. She saunters into the room and taunts Ben, thinking her “new friend Vincent doesn’t know his own strength.” Eve saw the wedding. She says Ciara looked like an angel walking down the aisle. She calls Ben lucky. He was so happy standing with her. She left before the end of the ceremony and heard it was “a real blast.” Ben’s shocked she blew the wedding up. She waited for his execution but when that didn’t happen, she took matters into her own hands. He won’t escape punishment for murdering her daughter Paige. She grabs his hair and pulls and he cries out, “If you’re going to kill me, just do it.” She thinks it’d be letting him off too easy. She wants him to feel the same pain she felt. He doesn’t have a daughter but he has a wife. Ben threatens Eve who chokes him a little to prove he’s not going to do anything. “I am not going to kill Ciara. You are,” she details.

At the hospital, Sarah quickly deduces that Allie’s at six centimeters. Sami promises to be there with her but Allie wants Eric. When Sami pooh-poohs that idea, she asks for Nicole. Nicole awkwardly says she’d be honored. Sami goes ballistic. She kicks Nicole out but Nic won’t go. Sami snaps that her daughter doesn’t want “that ex-pornstar” and Eric drags her outside. Sami continues to rant about her by the hub. Eric blames her for interfering with Rafe and being judgemental. Sami should pray that everything goes well. 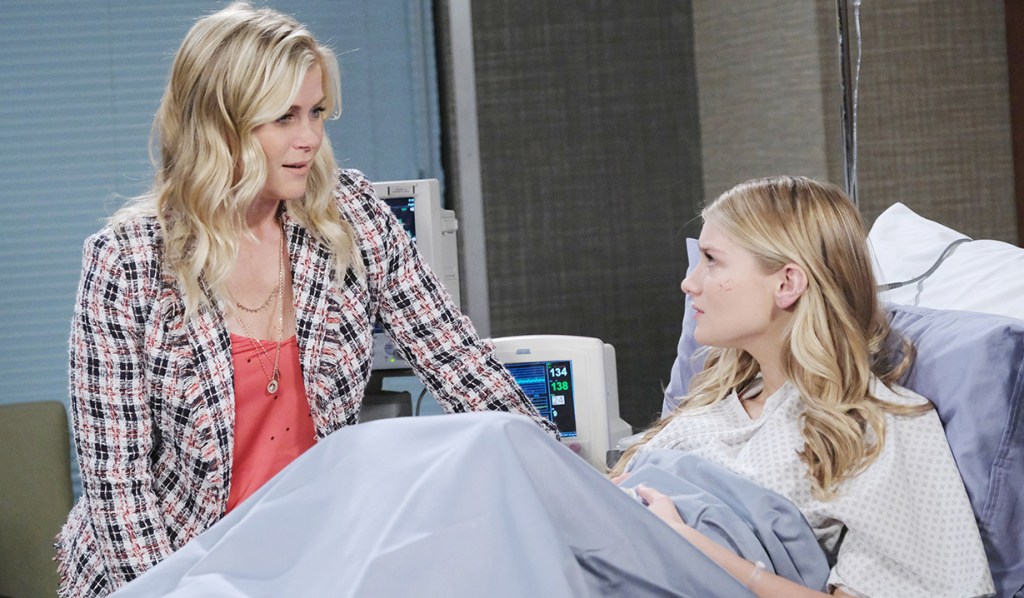 Back at the mansion, Gabi tells Chad, Gwen is “A needy kook with a foul mouth. Who would settle for ground beef when you can have filet mignon?” Gwen and Jake walk in. She tells Gabi that she and Jake like theirs medium-rare. She tells Chad they’re moving in and he smiles.

On the next Days of our Lives: Gwen and Jake move into the DiMera mansion.

Get the soap news, spoilers and interviews delivered directly to your email inbox daily with Soaps.com’s newsletter. 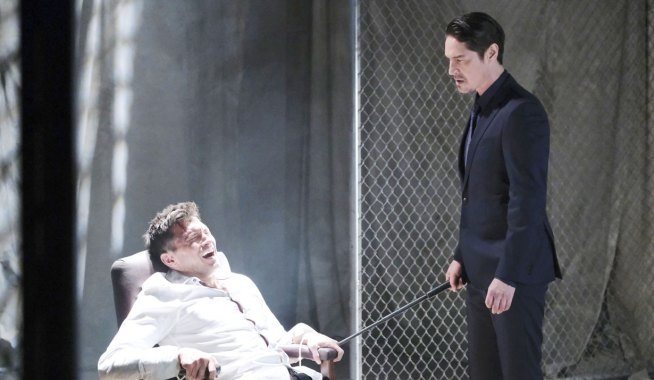 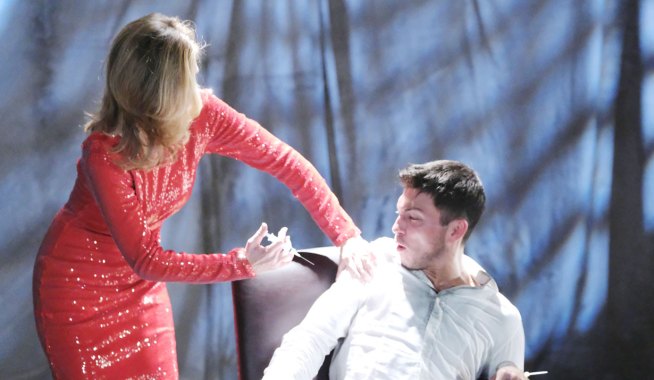