Wednesday July 29, 2020: On Days of our Lives today, Sonny and Will tell Arianna about the new baby, Allie goes into labor, and Ciara learns Orpheus isn't in Statesville. 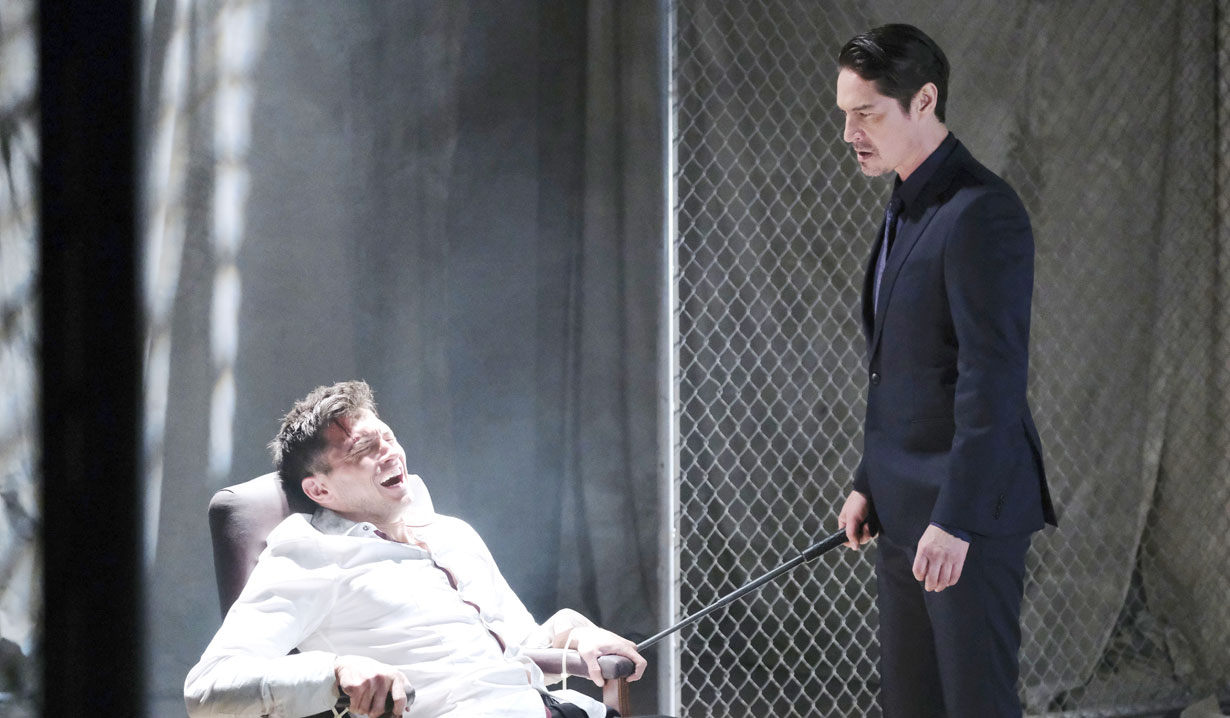 At the Kiriakis mansion, Will and Sonny discuss how everything is moving forward with this adoption so quickly. They tell Ari they’ve a big surprise for her. She jumps to the conclusion they are getting a puppy. They explain they aren’t getting a puppy yet, but they are getting a new baby. Ari frowns. They tell her they are adopting Aunt Allie’s baby. Ari really wanted a puppy and leaves to watch her shows. Sonny suggests they get her the puppy if it will help her accept the baby. Will brings Ari back and Sonny explains once the new baby is there and settled in, then they can look for a puppy. Ari is thrilled but quickly realizes this is a bribe. They wonder where she learned that word, and she tells them from Mommy who does it all the time. 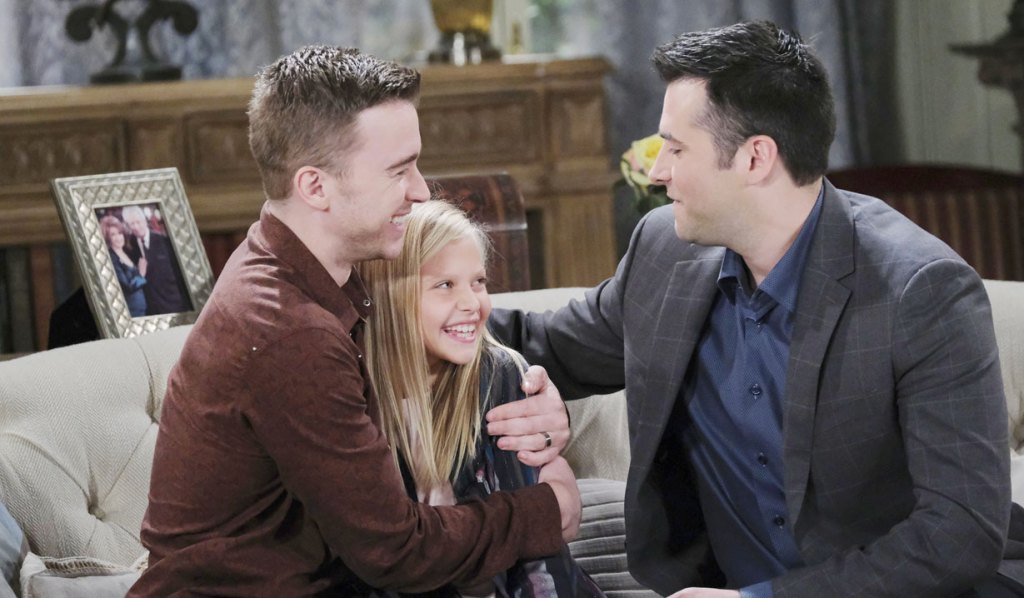 Nicole arrives home to learn Allie is ready to sign the adoption papers. Nicole says there is something she should know first. She relays that she just ran into Rafe and he admitted her turned Allie down not just because it was a complicated situation, but because Sami got to him.

Sami visits Rafe at the station and thanks him for telling Allie that he wasn’t interested in adopting her child, and she pleads with Rafe not to let Allie know that she talked to him. He promises not to but warns Sami that Nicole knows. Sami fumes and accuses Rafe of throwing him under the bus. She storms out to find Nicole and shut her up.

In prison, Clyde suggests to Ciara that Orpheus may have been targeting her by kidnapping Ben. Ciara decides to question Orpheus, but Clyde reveals Orpheus isn’t in this prison and he disappeared a few weeks ago. Clyde offers to put the word out to his people, but it might be hard to find him if he’s cut another deal and is in the witness protection program. Clyde suggests she lean on Rafe and get him to find out where Orpheus is.

In a warehouse somewhere, Ben is strapped to a chair and demands whoever is holding him show their face. A door opens and a man in black walks in and introduces himself as Vincent, (played by Michael Teh), the man who blew his wedding up and brought him there. Ben screams, “Why did you blow up my wedding!” Vincent calmly explains he was paid to. Ben asks who his employer is. Vincent says the same one who sent him that wedding gift. Ben recalls the gift and thinks Clyde is behind this. Vincent laughs that it’s not Clyde. Ben demands to know who it is. Vincent pulls out a baton and warns him he’s in no position to make demands and strikes his legs as Ben screams in pain. Eve yells to Vincent that is enough, and she’ll take it from her. Ben watches her stroll in wearing a red dress. 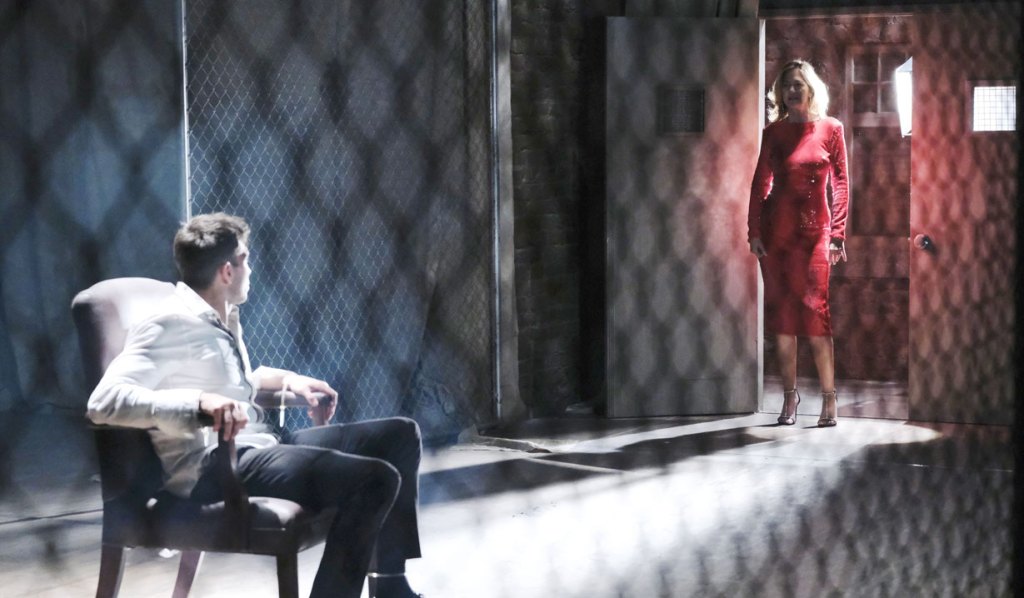 Lucas visits his mom at the DiMera mansion with news. She already knows he slept with Bonnie, as Harold saw her leaving his room. Lucas explains what happened and that he didn’t sleep with Bonnie. Kate is relieved. Lucas lets her know that Will and Sonny are adopting Allie’s baby after Rafe turned Allie down. Kate is surprised that Rafe changed his mind and quickly deduces Lucas is keeping something from her. After pressing him she realizes Sami meddled. Lucas admits she did, and Allie can never know.

More: How Eric could leave Days of our Lives

Sami bangs on Eric and Nicole’s door looking for Nicole, only for Allie to answer. Sami is surprised to see her but needs to talk to Nicole in private. Allie accuses her mother of trying to keep Nicole quiet, but she already knows her mother talked Rafe out of adopting her baby. Sami admits she talked to Rafe, but nobody can make Rafe do anything he doesn’t want to. A huge argument erupts between them, and Allie wants her mom to stop trying to ruin her life. As they bicker, Allie goes into labor. Sami coaches a panicked Allie on how to breathe. 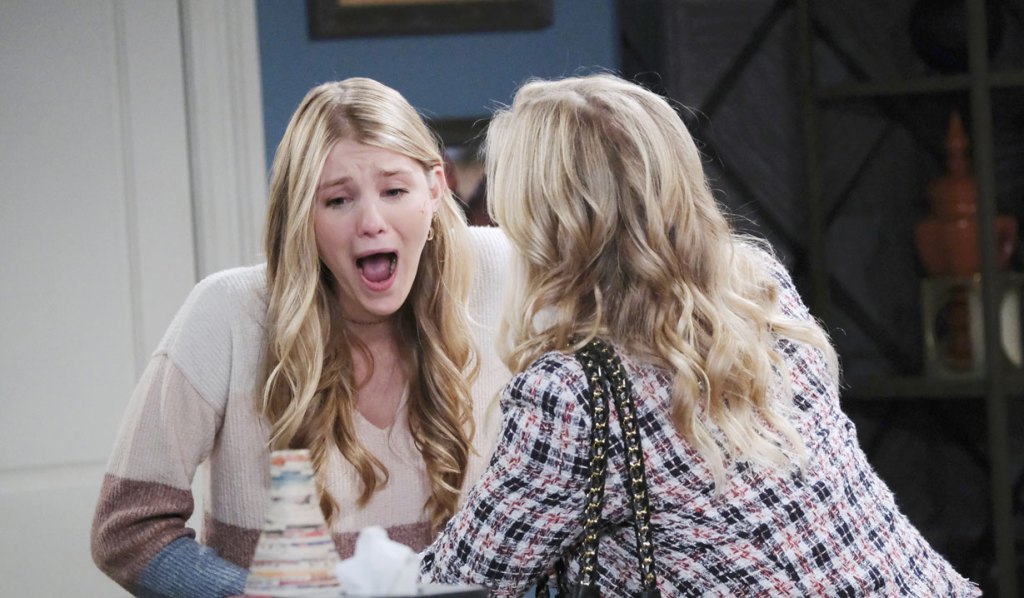 Ciara visits Rafe at the station and informs him that Clyde is innocent and suggested Orpheus planted the bomb to get to her. She also tells him that Orpheus has mysteriously disappeared from prison and hopes Rafe can get some answers. Rafe calls the warden, who tells him that that the authorities showed up with paperwork and took Orpheus away. Rafe calls Shane Donovan at the ISA, and they exchange heated words about security clearances. Rafe demands Shane get him the information on where Orpheus is. He disconnects and comforts Ciara as he promises they’ll find Ben. Later Shane calls Rafe back with the news that Orpheus is in a federal supermax prison and there is no way he planted the bomb. 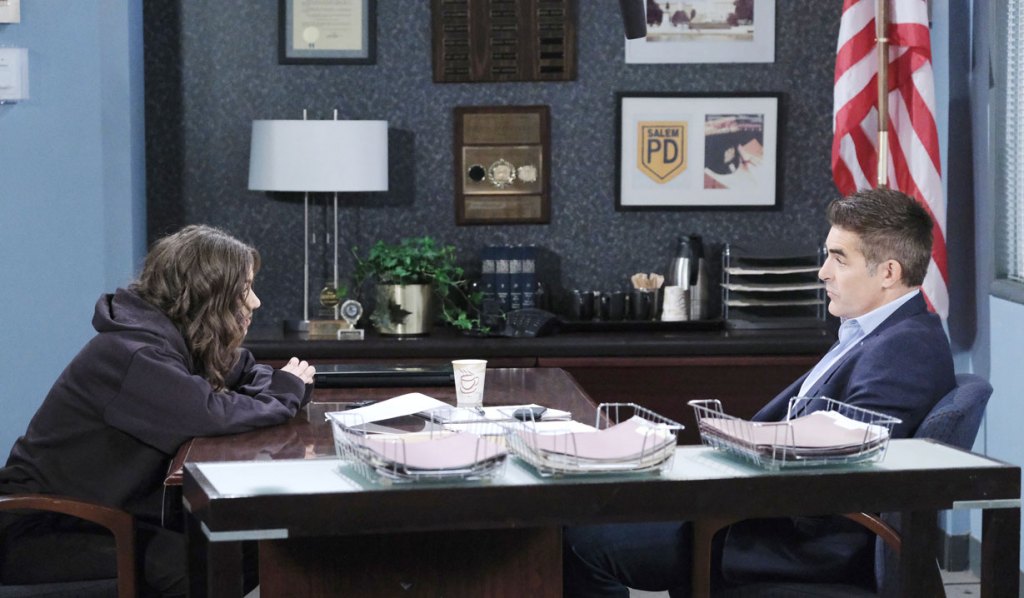 On the next Days of our Lives: Ciara and Claire team-up.

Get the latest soap news, spoilers, and interviews in your inbox daily with Soaps.com’s newsletter, and browse our gallery below of Eve’s evil deeds over the years!

<p>When Eve returned in 2014, one of the first things she did was demand her cut of Jack’s money. As his ex-wife, she felt she deserved half of the money he left in his will. Jenn fought her every step of the way. Eve was also furious that her daughter Paige was seeing Jenn’s son JJ.</p>

<p>After a fight with his girlfriend Paige, JJ comforted a drunk Eve, who feared she’d never sing again. The two ended up in bed. After, Eve threatened to tell Paige the truth unless JJ dumped her. Over time, Eve became somewhat infatuated with JJ.</p>

<p>After Deimos Kiriakis was murdered, Eve returned to Salem with news that she had married him before he died and was his widow. She integrated herself into the Kiriakis mansion, redecorated it, and took over Basic Black. She also wined and dined Gabi Hernandez in an attempt to convince her to bring Gabi Chic to Basic Black.</p>

<p>After Eve took over Basic Black, Brady tried to frame her for Deimos’ murder, which failed, and then find dirt on her. Eventually, Victor and Brady decided to have Brady seduce Eve to bring her down. However, Brady actually fell for Eve, and Eve for him. When she learned it all started as a scam, she ended things.</p>

<p>On another return, Eve once again shocked Salem by bringing a very much alive Jack Deveraux with her. She claimed to have found him, and he was suffering from amnesia. Eve filled Jack’s head with half-truths about himself and it put a strain on his relationship with many in Salem, including his family.</p>

<p>When Ben Weston was deemed reformed and released from Bayview, it came as a shock to Eve. Eve attacked him for brutally killing her daughter Paige. She swore to make him pay for her daughter’s death.</p>

<p>After returning from the dead and with amnesia, <em>Days of our Lives’</em> Jack Deveraux ran for mayor of Salem with Eve Donovan as his campaign manager. In an election stunt he proposed marriage to Eve, and the couple was reluctantly married by Jack’s sister Adrienne Kiriakis. </p>

<p>On her first return, Eve became a mentor to singer-songwriter Claire Brady and tried to help her launch her career. Later she and Claire teamed up to take Haley Chen down. Claire had become jealous of Haley, who was going to marry her boyfriend Tripp Johnson to stay in the country legally. Claire obtained a recording of Haley admitting the marriage was a sham, which Eve planned to use to bolster Jack’s campaign. </p>

<p>Bolstered by an anti-immigrant stance, and Eve’s conniving as his campaign manager, Jack won the campaign for mayor of Salem. He immediately set out to make bold changes in Salem. </p>

<p>After winning the election, Jack immediately fired Hope Brady as the Salem PD commissioner. He named his wife Eve, who had no police experience, as the new commissioner. One of Eve’s first orders of business was to put Ben in jail. </p>

<p>When  Dr. Rolf’s serum that helped restore Will Horton’s memory was recreated, Eve panicked. She knew if Jack remembered his past that he would leave her for Jennifer. She schemed to get the serum before it could be delivered to Jennifer and Jack, and used Xander to acquire it. </p>

<p>When Jack and Jenn learned of Eve’s machinations to keep him from remembering, they confronted her. A furious Eve smashed the serum in front of them. Fortunately, Jack eventually regained his memories on his own, and he did leave Eve. </p>

<p>After Jennifer learned Dr. Rolf was planning to turn Hope into Princess Gina, the already transformed Princess Gina pushed her over a balcony. Jennifer fell into a coma for an entire year, and Eve was framed for the crime. After spending a year in jail, Jenn’s daughter Abigail was able to prove her innocence. Sick of Jenn, Jack and all of Salem, she left town.</p> 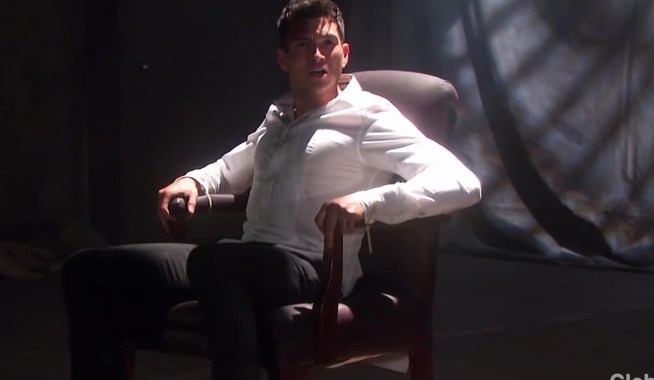 Eve Horrifies Ben With Her Sick Plan for Ciara 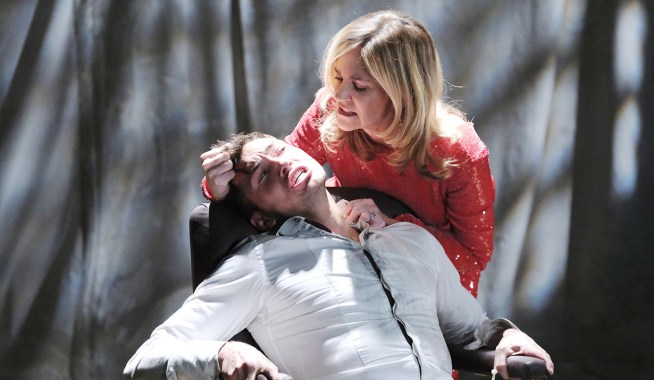