Thursday June 16, 2020: On Days of our Lives today, Jake's identity is confirmed, Marlena gives Will and Sonny a heads-up, and Nicole and Eric consummate their marriage. 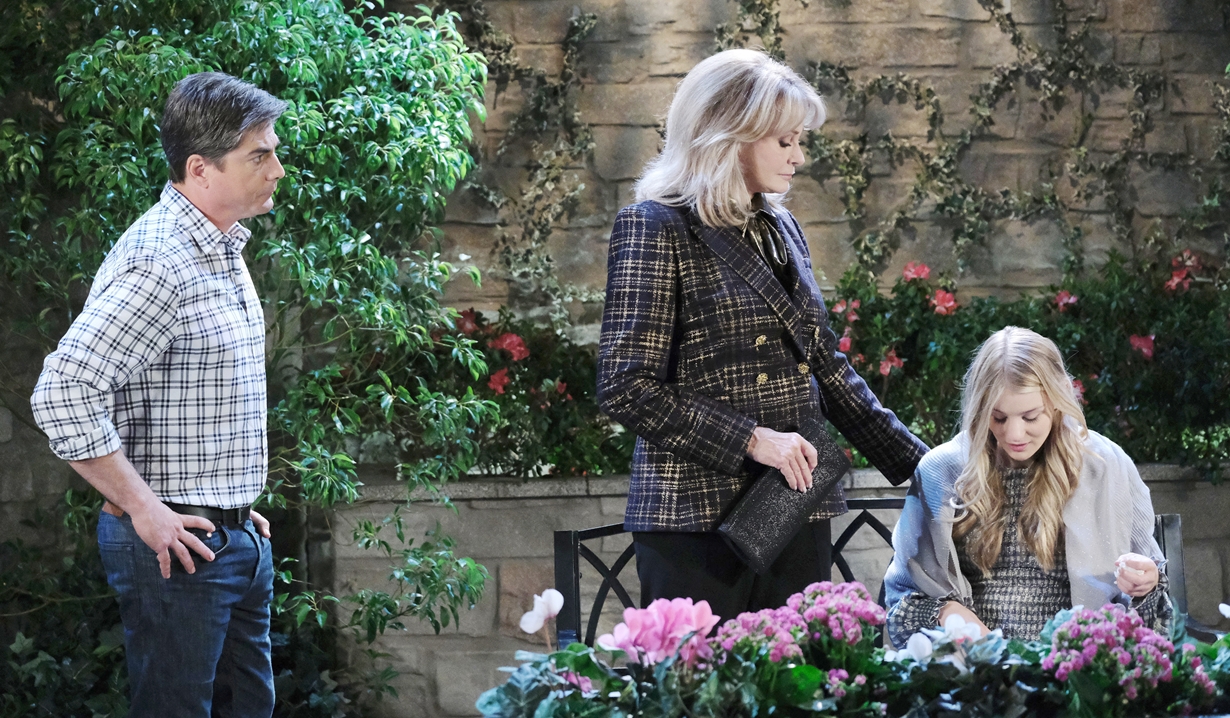 At the SPD, Jake, Gabi, and Vivian are stunned as Ivan explains that Vivian had twins. Ivan explains Jake is Stefan’s twin brother. Viv worries about the name ‘Jake’, which isn’t dignified. Jake questions Ivan, who tells of Jake being sickly at birth and was not expected to live. He left with the healthy twin and never knew the second child survived. Gabi points out they need proof. Jake knows where to find it – he’ll call the agency that handled his adoption. He phones and learns Ivan was telling the truth. Viv gasps, “My baby…” Gabi weeps. “You’re not my Stefan.” Jake rubs her back knowing she really loved him. “I’m so sorry.” Gabi so wanted him to be Stefan. Jake thinks he was lucky to have somebody love him as she did. Viv wants to celebrate finding a new son, but still wants to change his name. Gabi storms out and Viv stops Jake from following her. He calls Vivian out on her attempted murder charges and goes after Gabi. Viv’s exasperated. She complains to Ivan about having to educate ‘this lump’ and wonders where to begin. Ivan thinks they should start by keeping her out of the slammer. Viv agrees – her son needs her. She muses about thinking outside of the box, then chirps, “I’ve got it!” 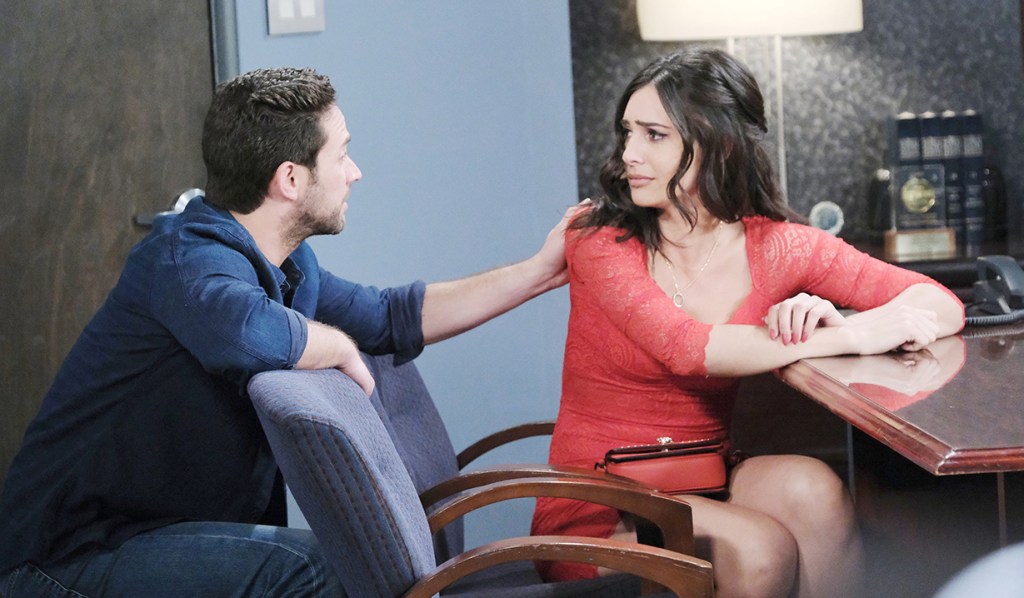 At the Kiriakis mansion, Sonny and Will reflect on missing Eric’s wedding to be with Justin and complain about Bonnie showing up at Adrienne’s grave. Will wonders if Bonnie’s there for his dad. Sonny thinks it’s a definite possibility. Will’s reluctant to attend Eric’s wedding reception…he has a feeling Sami’s going to find out about everything. If she learns they want to adopt Allie’s baby, they’ll be on her bad side.

At the park, Marlena soothes Allie, who’s crying that she hates her mother. Allie takes a call from Lucas and tells him Sami crashed Uncle Eric’s wedding and knows about the baby. After disconnecting, Marlena points out Allie’s not blameless – she’s tired of this dance she and Sami do year after year. She insists Sami wants what’s best for her. Chastened, Allie agrees to be more understanding. Lucas appears to take Allie to find Sami. Marlena calls Will and wants to come over. She advises that Sami turned up at the wedding.

At Brady’s Pub, Eric won’t let Sami ruin his wedding. Nicole protests she already has and warns she didn’t turn Allie against Sami…she did that on her own. Sami launches more cake at Nicole as Eric tackles her. Nicole goes to clean up, but listens as Eric fills Sami in on Allie’s arrival and defends Nicole. He explains Allie believed Sami would make everything worse and she’s proved her right! Sami decides she’ll grovel, then she and Allie will raise the child. Eric feels it’s Allie’s decision, and reveals she has a plan as to who would adopt the baby. Allie and Lucas enter, taking in the aftermath of the cake fight. Eric leaves. Sami apologizes to her daughter and wants to start over. Allie loves her but doesn’t want her involved in her child’s life. Sami knows what she’s going through and wants to be there for her…she doesn’t have to give her baby up now. She pleads her case and says everyone will help. Allie notes Nicole’s been particularly great. Sami grits out that she’s grateful for that. Allie relays she’s considering giving the child to someone in their family and explains Will and Sonny are interested. Sami’s not opposed. Allie reveals she had already asked someone else. “It’s Rafe.”

Marlena arrives at the Kiriakis mansion and warns Will and Sonny that Sami was angry about Allie’s plans to give the baby up for adoption. She notes they’ll have to sort all this out and intones, “Heaven help us all.” Will feels for Lucas refereeing. They discuss how Sami might feel if they were to adopt the baby since it would be in the family. Marlena’s not sure how she’d react to the idea of Rafe… Suddenly, Will worries if they have Sami’s grandchild, she might want to stay with them! 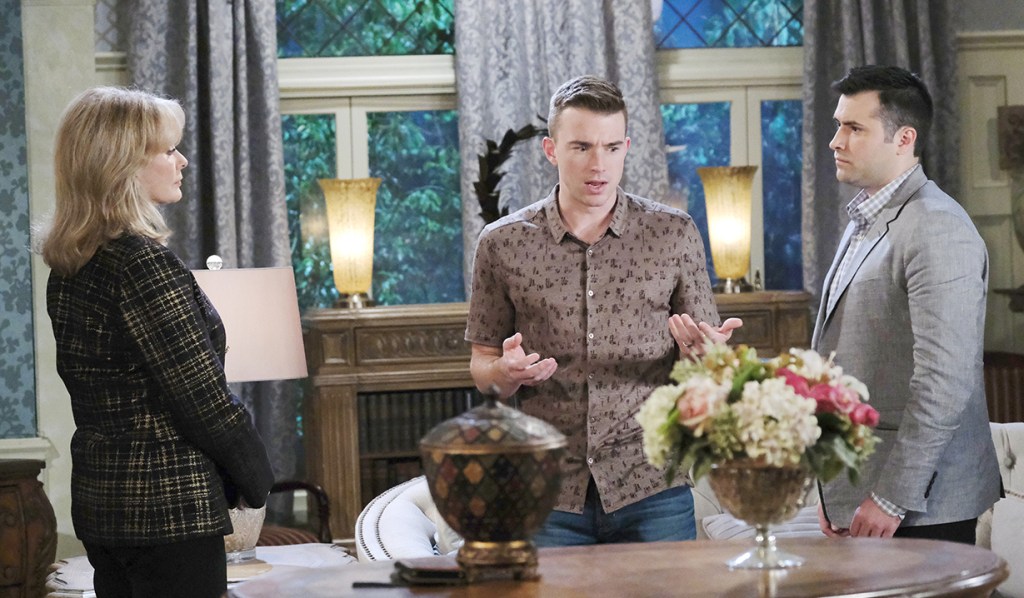 At their apartment, Nicole emerges in lingerie and Eric marvels that she still takes his breath away. Nicole purrs, “Mmm husband,” as they kiss. They toast as Nicole laments Sami taking out her anger on their wedding cake. Eric reveals a new cake top – he aims to please. In the bedroom, they make love. After, they can’t believe they’re finally married and have a lifetime together. They express their love.

Jake finds Gabi at the DiMera mansion. She wants him to go. He spots Stefano’s portrait and she confirms it’s his father. “You’re here for the money.” Jake explains he came to make sure she’s okay. Gabi will never be okay again and doesn’t want his pity. He leaves. She never wants to see that face again.

On the next Days of our Lives: Sami has orders for Rafe.

Ivan Makes a Huge Reveal About...