Eric Receives a Message From Beyond the Grave – From Grandma Caroline

Monday June 13, 2020: On Days of our Lives today, Steve and Kayla have an adventure, Ben and Ciara have a disagreement, and Nicole and Eric get ready to marry each other. 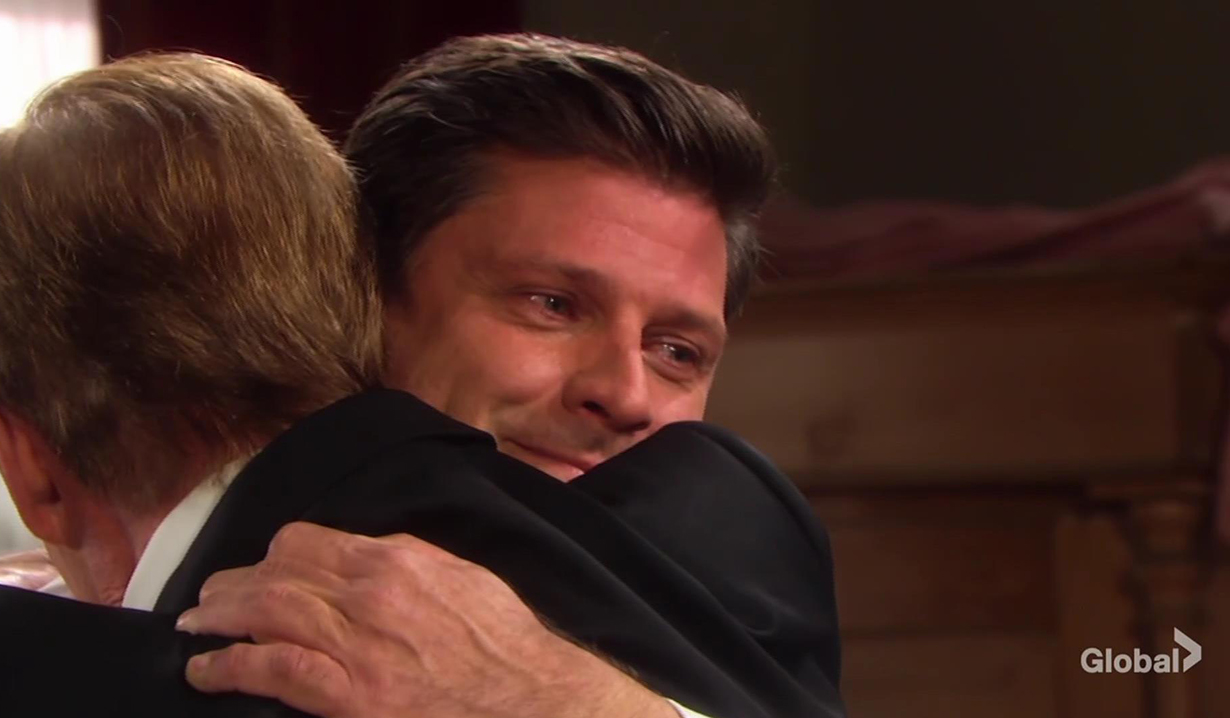 At home, Nicole takes a call from Eric, who is getting into his tux in a room above Brady’s pub. They’re both excited to marry each other. They disconnect and Lucas arrives looking for Allie who is out running errands. Nicole reminds Lucas her wedding is today. Lucas doesn’t care since she’s been married multiple times. He’s sure she has everything under control. He’ll wait. Nic rolls her eyes. Lucas starts babbling to Nicole about his daughter wanting Rafe to adopt his grandchild. Nicole sighs. He needs to stop the drama and respect Allie’s wishes. Lucas feels Sami has the right to know Allie’s pregnant. Nic ushers him out and he wishes her a happy wedding – and the last one.

In the park, Ciara and Ben are stunned when he proposes and the ring is missing from the ring box. Ben blames Claire. Ciara muses that there’s no proof. She’s giving her the benefit of the doubt. Ben’s not. He’s pissed. Ciara wants to call the jeweler.

Outside the pub, Claire stuffs something into her purse while sitting on the bench. She sees Allie and the two embrace. Claire has questions about her pregnancy but Allie’s busy. Inside, Roman helps Eric with his cufflinks and doesn’t think Sami should be kept in the dark about Allie’s pregnancy. They’re all going to pay for it once she does find out. Back upstairs, Roman hands his son a letter. “It’s from Grandma,” Eric says, moved. Roman asks him to read it privately and hugs his son. He goes and Eric cries as he reads, “Dear Eric. If I was here I would tell you that I’m not supposed to play favorites. But from the moment you were born, there was something special about you. You were the child who felt so much and so deeply. I know how important being a priest was to you given your deep faith but ever since you left the priesthood I’ve prayed that you would find the deep abiding love I shared with your grandfather Shawn. It’s not always easy but it will be the joy and rock of your life. If you’re reading this it must be your wedding day and my prayer has finally been answered. I hope the woman lucky enough to be your wife makes you happy beyond your wildest dreams. She sure as hell better be.” Eric laughs. “Because if she even thinks about hurting you, she will face the wrath of your Grandma Caroline. Wherever I am, I’m with you. I love you, Eric. Grandma Caroline.”

Outside Salem Inn, Jack talks to Abigail on a call to let her know her mom is on the way. He disconnects and is rocked to see “Adrienne.” He grabs her in a hug until she grabs his butt. Jack pulls away, surprised and Justin strolls up to clarify – she’s Bonnie Lockhart. Bonnie clarifies that her PR people wanted her to lose the trashy clothes for her book tour. She asks if he wants to buy a book and Jack blows up at her. Justin grins while they argue. Bonnie insists she’s remorseful and if he bought her book he’d see she said nothing but kind things about Adrienne. Justin pulls Jack out of the square before things get worse. Later, Bonnie signs a book for an avid fan. They gossip over her sexcapade with Lucas. The lady goes and Lucas pops up. Bonnie imagines Lucas ripping off his shirt once he sees her and making out with her passionately. She snaps out of it and asks him out for a beer. Lucas raises an eyebrow. He’s an alcoholic. Bonnie knows. “But you were smoking hot when you were drunk,” she says. Lucas refuses to go anywhere with her. He stomps off. Bonnie refuses to give up on him. 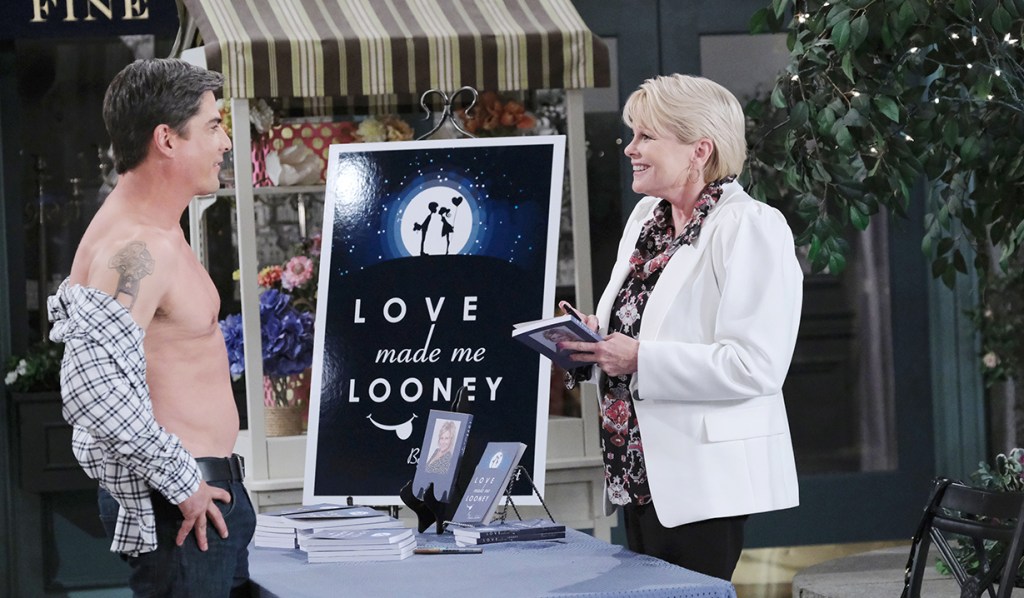 Steve and Kayla finally arrive at their hotel after “15 hours of hell.” They drink to Kayla giving Steve another chance to reunite. Kayla feels guilty about dumping Justin who was so kind. She hated hurting him. Steve knows. Justin understands that they’re the loves of each other’s lives the way he and Adrienne were. They get into their twin beds and reminisce about Stockholm when he protected her from Orpheus. They rehash Steve making decisions for her without asking her and Steve admits he’s still afraid he’ll hurt her. He promises to stop making decisions for her. Kayla gets into his bed and they snuggle and begin kissing. They make love. 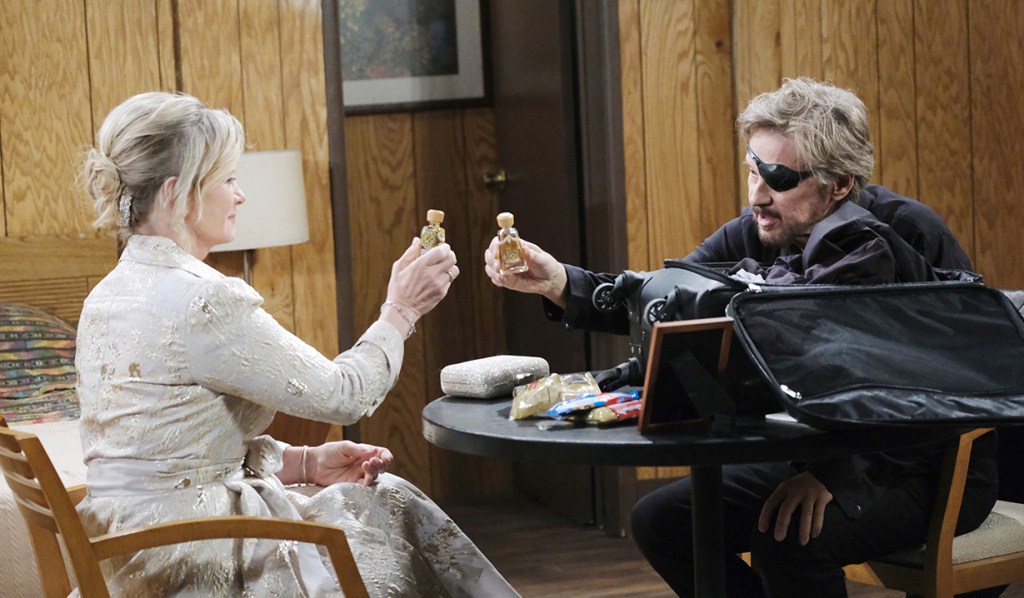 Ciara and Ben drop by the pub when Claire notices Ciara’s not wearing the ring, Ben accuses her of stealing it. Ciara just wants answers. Claire yells that she didn’t ruin her dress or take the ring. Ciara wants to believe her. Clarie is offended and takes off. Ciara and Ben search the area around the park.

Justin and Jack head to the mansion and they commiserate over Bonnie’s return. They hope she leaves quickly. Jack wonders why she’d stay.

Allie returns to see Nicole at the apartment and helps her get ready for the wedding. Nicole’s grateful for her help but Allie worries that she’s caused a lot of drama. Claire arrives and lets Nic and Allie know she can’t attend the wedding. She becomes emotional after seeing Nicole’s beautiful ring and apologizes and goes.

Claire returns to the park and overhears Ben suggest to Ciara that she find another maid-of-honor.

On the next Days of our Lives: Kate gets the serum for Vivian from Dr. Rolf.

Get the soap news, spoilers and interviews in your inbox daily with Soaps.com’s newsletter. And if you like photo galleries, take a look at Bo Brady through the years. 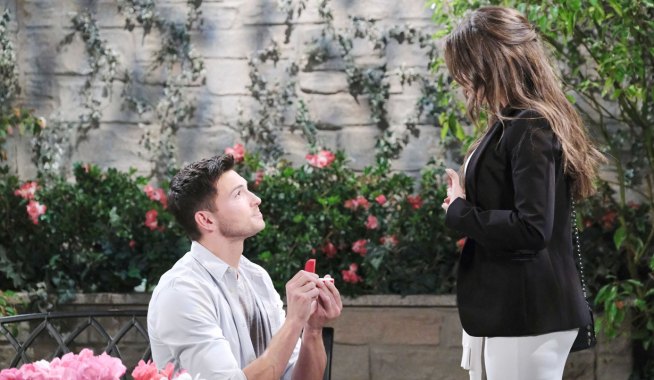 Nicole and Eric’s Wedding Is Interrupted by Hurricane Sami 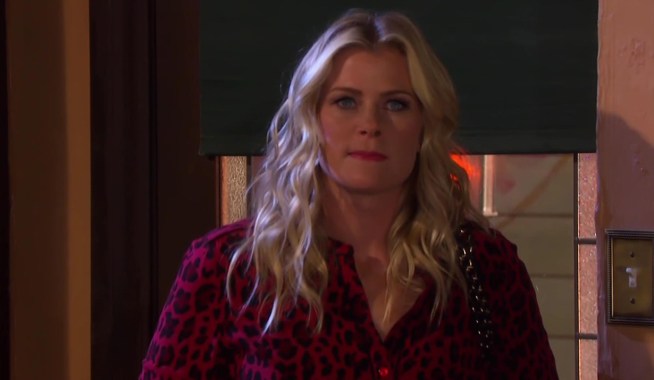