Tuesday June 7, 2020: On Days of our Lives today, Steve makes a decision about his future, Kate's thrilled that the key to the city ceremony went well, and Justin learns the truth. 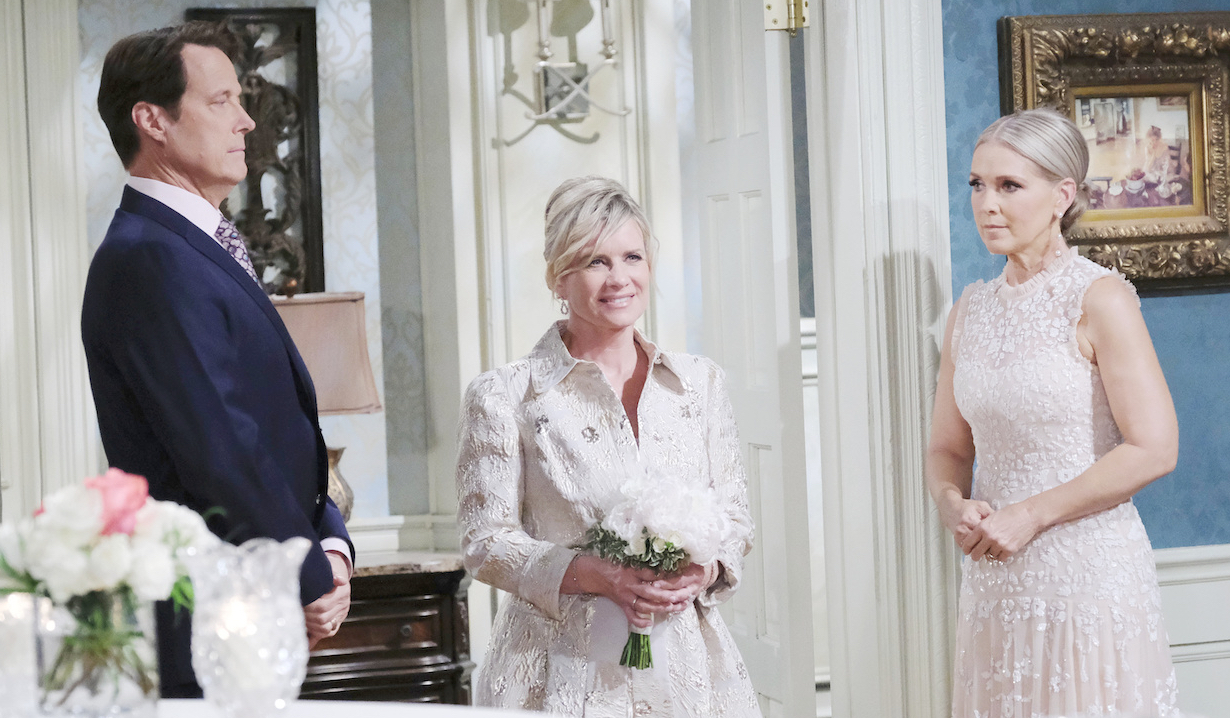 Kate preps Abe at the square for their big key to the city ceremony. Kate’s annoyed that Salem Spectator is not sending a seasoned reporter. Abe shrugs. It’s her own fault for having the ceremony during “Steve and Kayla’s wedding.” Kate glares at him for the Freudian slip and he winces. It’s a habit. Nearby at a table, Marlena is upset to miss Justin and Kayla’s wedding. They find Kate and she’s not happy to hear John doesn’t have a speech prepared.

At the Kiriakis mansion, Victor thinks Justin and Kayla deserve happiness and that Kay’s better off “without that one-eyed wonder.” Will and Sonny bring up Allie’s pregnancy and wanting to adopt her baby and Victor is against that. They’ll be under Sami’s grasp if they do that. Sonny argues that Uncle Vic lost the right to give his thoughts on anything since he let Will rot in prison. Will asks them to stop arguing. He runs off to prepare to officiate.

On a bench outside the pub, Jack encourages Steve to tell Kayla the truth about his feelings before she marries Justin. Steve isn’t going to. They agree if Adrienne was alive, she’d call Steve a moron for losing Kayla. Jack says he’s putting everyone else’s happiness above his own. Steve argues that it’s about time he did. He loves Kayla too much to mess this up for her.

At home, Kayla looks at her wedding photo with Steve and furrows her brow. She flashes back to their wedding. Joey calls to wish her a happy wedding day. She tears up but claims she isn’t crying. She tells her son that she and his dad will always be connected because of him and Stephanie and says that Steve wants her happiness. Joey’s happy for them too.

Justin overhears Jennifer and Hope talking about how Kayla has no idea how much Steve wants her back. Jenn heads to the square as Justin appears. He didn’t mean to eavesdrop but says he heard them say Steve wants Kayla back. Justin’s confused. Steve went out of his way to wish him well today. Hope says Steve isn’t planning on acting on his feelings for her. Steve refused to say anything after Justin proposed. Hope says if she thought Kayla didn’t love him, she’d say so. 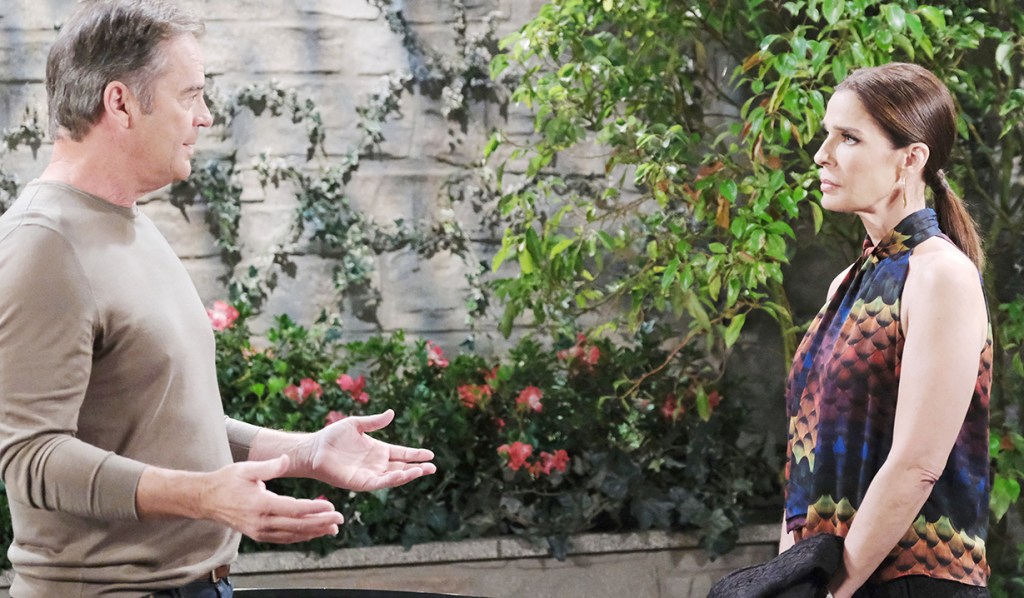 Jenn arrives at Kayla’s condo. She’s crying from her talk with Joey. She could tell that he wishes she was reuniting with Steve. Jenn helps Kayla with her hair and dress. Jenn gives her a blue topaz bracelet. It’s something blue and borrowed, from Adrienne. The stones represent honesty, love, friendship and clarity of feelings, Jenn states. She begins to say that if she’s having second thoughts when Jack appears. Kayla admits she is. 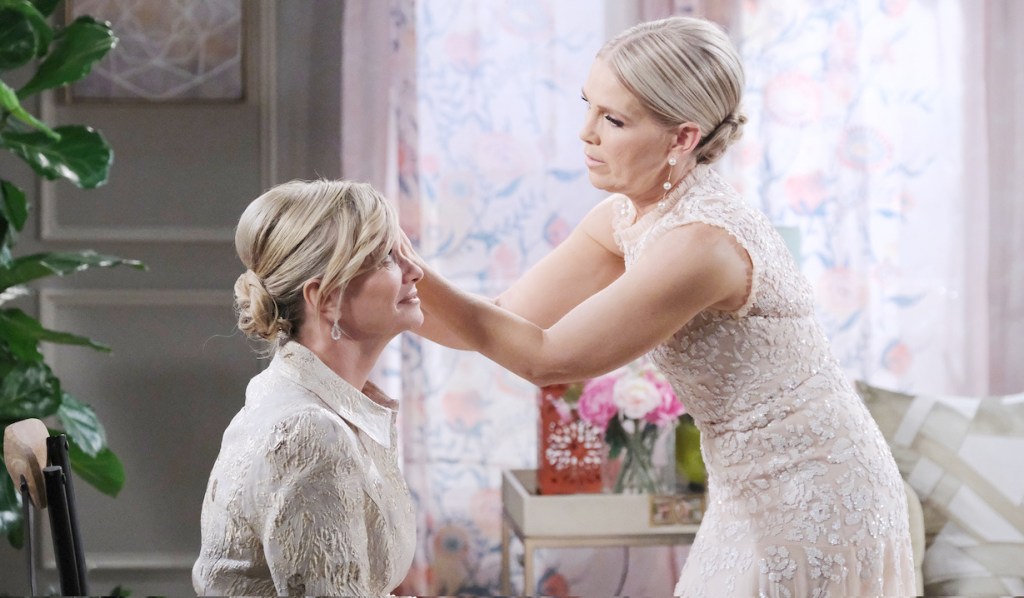 Justin arrives home and Sonny notices he looks sad and questions him. Justin was at the cemetery, thinking of Adrienne. Victor thinks life gets easier at this point. He gets Sonny to break out the Ouzo. Victor calls Justin a lucky man who deserves this happiness.

Back at the square, Kate’s upset that Steve’s wearing his leather jacket. He asks if she wanted him to be in a tux or something. She sighs. Hope pulls him aside and fills Steve in on her conversation with Justin. Hope thinks it’s time he told Kayla the truth. Abe begins the ceremony to honor Hope and Steve as Steve daydreams about his wedding to Kayla. Steve accepts his award. Later, the ceremony has ended and Marlena, John, Hope and Steve head out for a drink while Kate has more work for Abe. She happily tells him they got 237,000 hits on the ceremony. Kate says the Kardashians follow her on social media. She tagged them in her post and now Abe is famous. 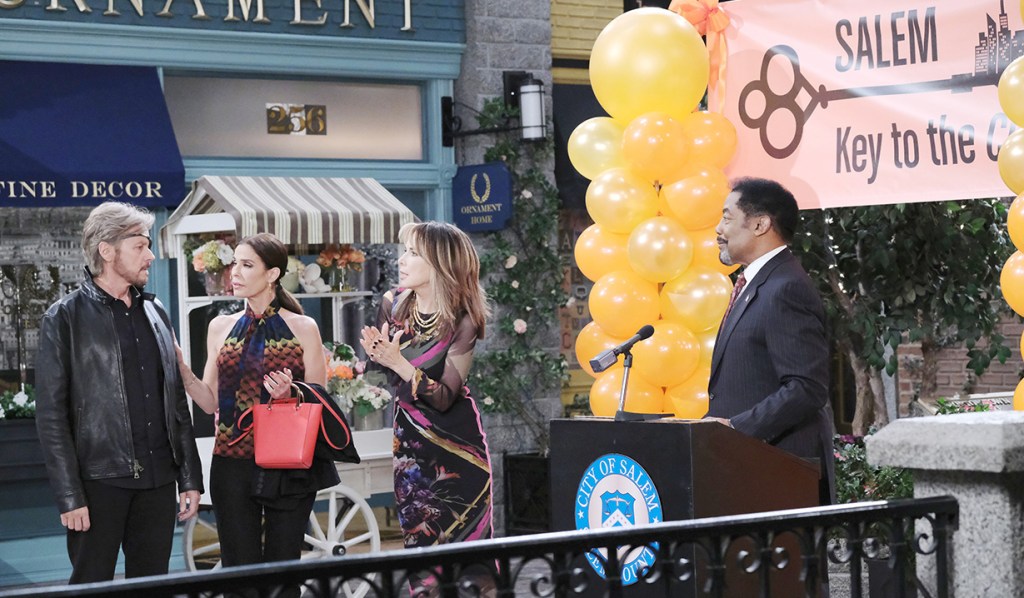 At the pub, John tells a funny story and everyone but Steve laughs. John asks if he’s okay. Hope tells him to be honest – he’s amongst friends. Steve admits he’s having a hard time but blames himself for the time they spent apart. Marlena thinks Steve’s afraid of rejection. Steve says it’s not healthy for him to watch Justin and Kayla share a life together. He’s going to take off to Europe indefinitely to work with Shane on a case for Black Patch.

The wedding gets underway at the Kiriakis mansion with Will officiating but before Kayla can walk down the makeshift aisle, she breaks her shoe and Jack steps in to recite the Maud Muller poem.

“Maud Muller, on a summer’s day,
Raked the meadows sweet with hay.

Beneath her torn hat glowed the wealth
Of simple beauty and rustic health.”

Kayla takes off her shoes and begins to walk down the aisle. Jack steps aside as Justin considers Hope’s words about Steve loving Kayla. Will starts the ceremony and asks if someone objects to speak now. Justin stops the wedding. 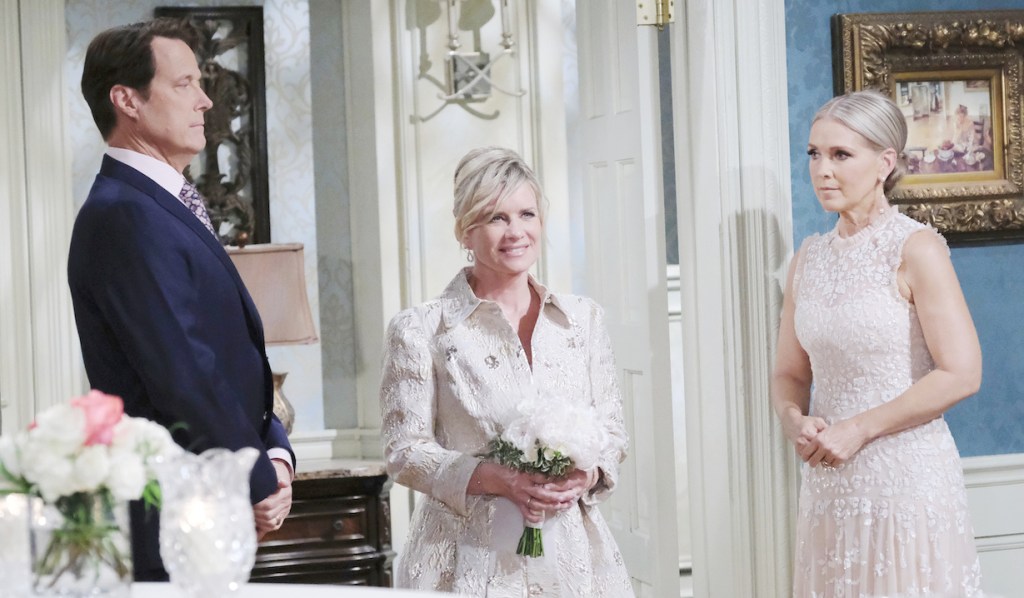 On the next Days of our Lives: A familiar face returns to Salem. 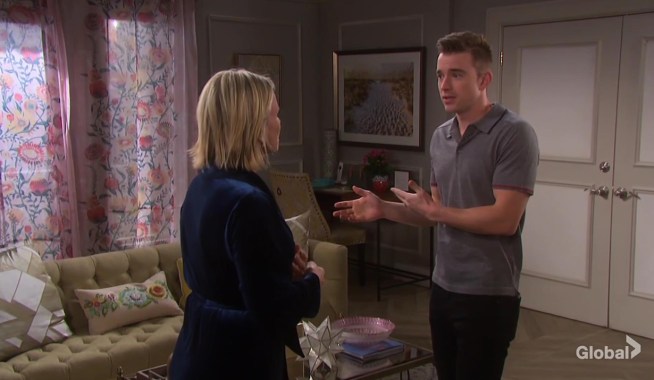 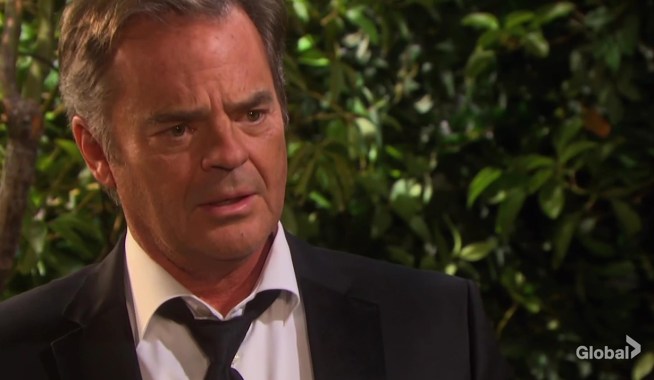