Vivian Vows to Turn Eli & Lani’s Wedding Into an Execution

Wednesday July 1, 2020: On Days of our Lives today, Jake and Gabi learn the DNA results are in, Ciara gets an unsettling phone call, and Eli and Lani finally get married. 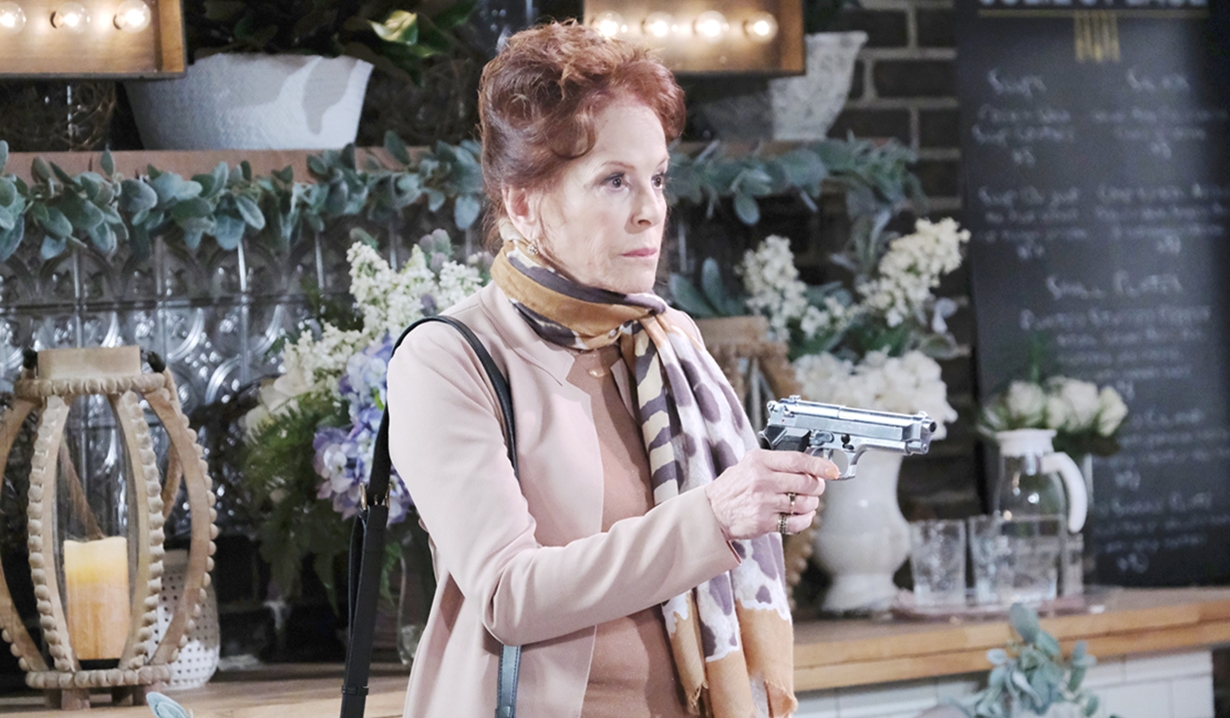 Claire and Ciara arrive at Ciara’s suite with wedding dresses Claire convinced the boutique to lend out. Ciara’s thankful. Claire will do everything she can to ensure she and Ben have the most memorable wedding ever. Ciara dons a dress that she loves, but Claire tells her it’s basic and looks like something that belongs on a wedding cake. When Ben’s name comes up, Claire advises Ciara that he threatened her and was really intense. She just wants to make everyone’s life better and happier and hopes the other gowns aren’t so hideous. After a dress is chosen, Claire wants to celebrate but Ciara declines. Claire will return the dresses. As they embrace, Claire gets a smug expression.

At the garage, Jake confides in Ben that Gwen may want to get back together. He worries something always messes it up and mentions her fight with Gabi. Jake wonders if she used her theory that he’s her husband to game the judge and hopes she gets what she deserves. Ben counters that she’s had it rough and Stefan made her feel safe – it was the real deal.

At Julie’s club, Vivian appears to the amazement of everyone gathered. Abe says her name in a warning tone and Julie informs her she won’t stop the wedding. Vivian wonders if Lani really thought she’d let her get away with killing her son. She pulls out a gun and points it at Eli as he approaches. She intones that everyone thought they were coming to a wedding, but it’s an execution. Vivian shoots the gun in the air and Abe jumps in to say he understands her pain. Eli taps on his phone behind Abe as he begs Vivian to let his daughter live as she meant her son no harm. 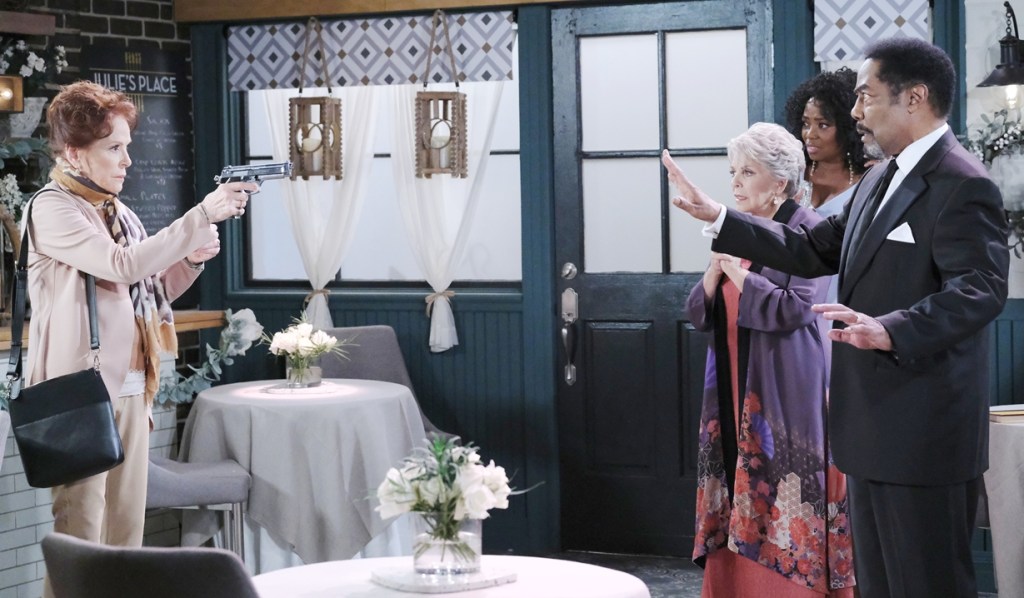 In Gabi’s place, she’s impatient about the DNA results and tells Rafe she expects this to confirm her husband is alive. Rafe goes over Stefan’s heart being given to Julie and is concerned about her trusting what Rolf said about bringing him back to life. Gabi knew it was Stefan when she kissed him – the test results will prove everybody wrong. Rafe gets Eli’s emergency text and heads out.

Gabi arrives at the garage and Jake’s stunned to hear she was acquitted. Jake snarks that she’s free until the next looney toons crime she commits. He wants her to leave, but she wants him to accompany her to the hospital for the DNA results. Once he finds out he’s her husband he’ll have to accept it. She insults Gwen, which riles Jake. Ben excuses himself. Gabi and Jake continue bickering as he suggests she might have fixed the results. He thinks she might want him to replace her dead husband in bed. She slaps him and vows never to step foot in the place again if he’s not Stefan.

At the wedding, Vivian’s not willing to let Lani live. Lani expresses her regrets about Stefan and tells her she’s pregnant – she won’t just be killing her, but her unborn child. Vivian is unmoved and unlocks the gun’s safety. “This is the end.” Rafe appears, wrests the gun from Vivian, and cuffs her. He chastises she almost killed someone for no reason – her son may be alive. Viv thinks it’s a sick joke, but Julie pipes up that she saw him herself. Rafe takes Vivian away. After everyone recovers, Lani needs a sign that they should continue. Suddenly, her mom reappears with Billy. Julie fills her in on the events with Gabi and Vivian. Eli thinks Lani got her sign – they’ll get married. Eli and Lani share personal vows. Eli mentions David and Lani’s sacrifice, while Lani calls him the love of her life and her dream come true. Marlena leads the ring exchange, then pronounces them husband and wife. They kiss as everyone applauds. Marlena announces the newlyweds will ‘jump the broom’ to sweep away bad energy. Together, they sweep the ground, then place the broom on the ground and leap over it. Their loved ones cheer as they kiss again. 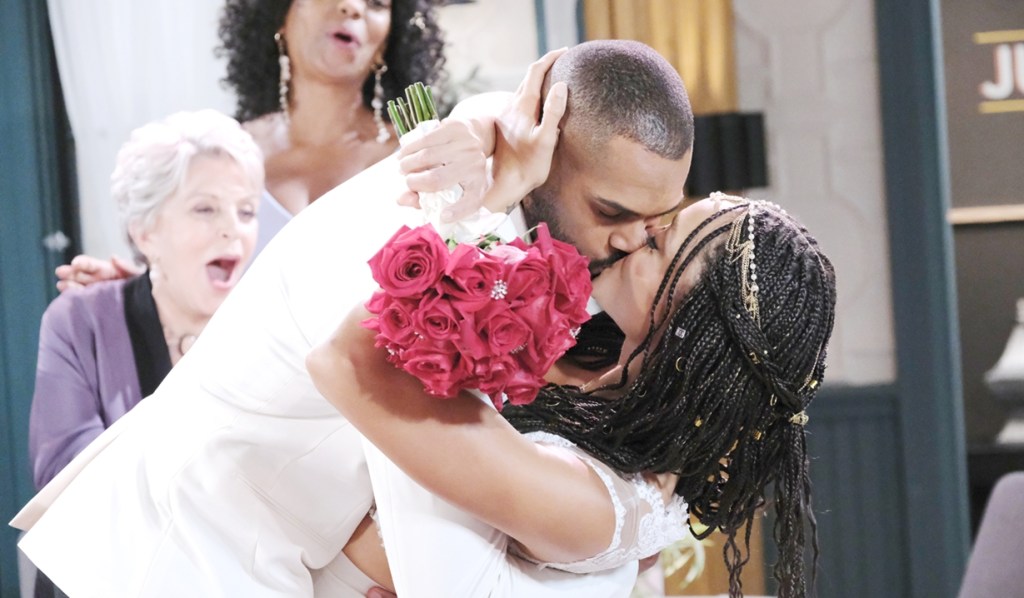 Ben arrives at the suite and Ciara relays she found a wedding dress – Claire actually found it. Ben’s glad she came through for her and clears his throat. Ciara learns Gabi came by and was acquitted and that Jake’s DNA results are in. Ben believes he wants to know the truth deep down. They’re making out when the boutique calls – her dream wedding dress is ruined. She can’t understand it, there was no nail polish on it when she put it back in the bag. “How could this happen?”

In her room, Claire paints her nails green.

At the SPD, Rafe updates Vivian on Jake Lambert and shows her his photo. 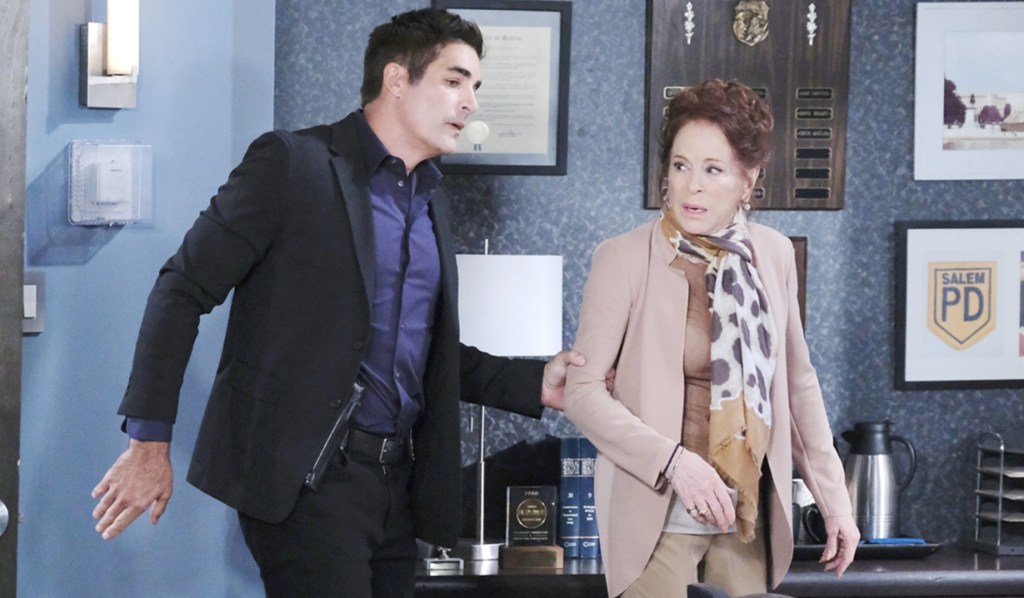 Jake joins Gabi at the hospital and they spar about him not trusting her. She goes for the results, returns with an envelope, and touches her wedding ring. Jake prompts her to open the envelope. She does… 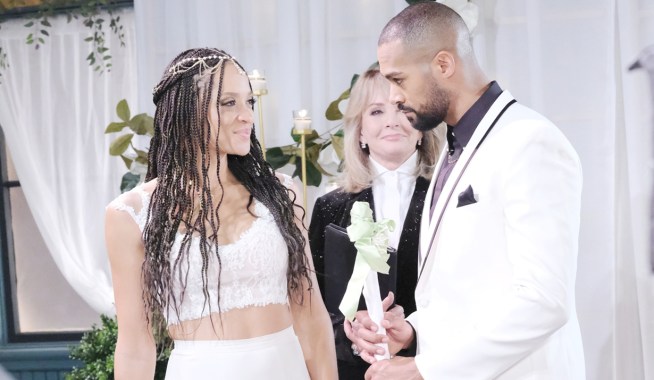 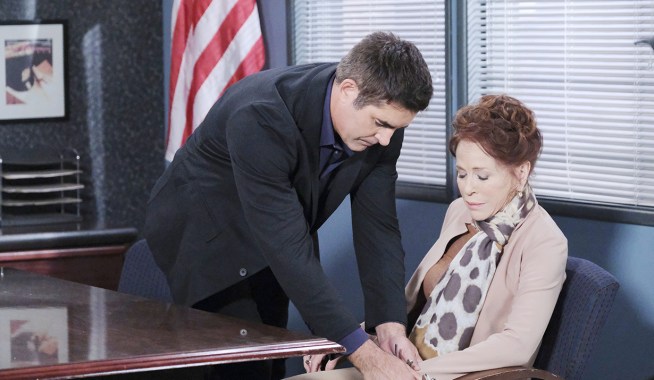