Tuesday June 30, 2020: On Days of our Lives today,  Gabi celebrates, Rafe finds himself surprised by a visitor, and Tamara goes to rest during the ceremony. 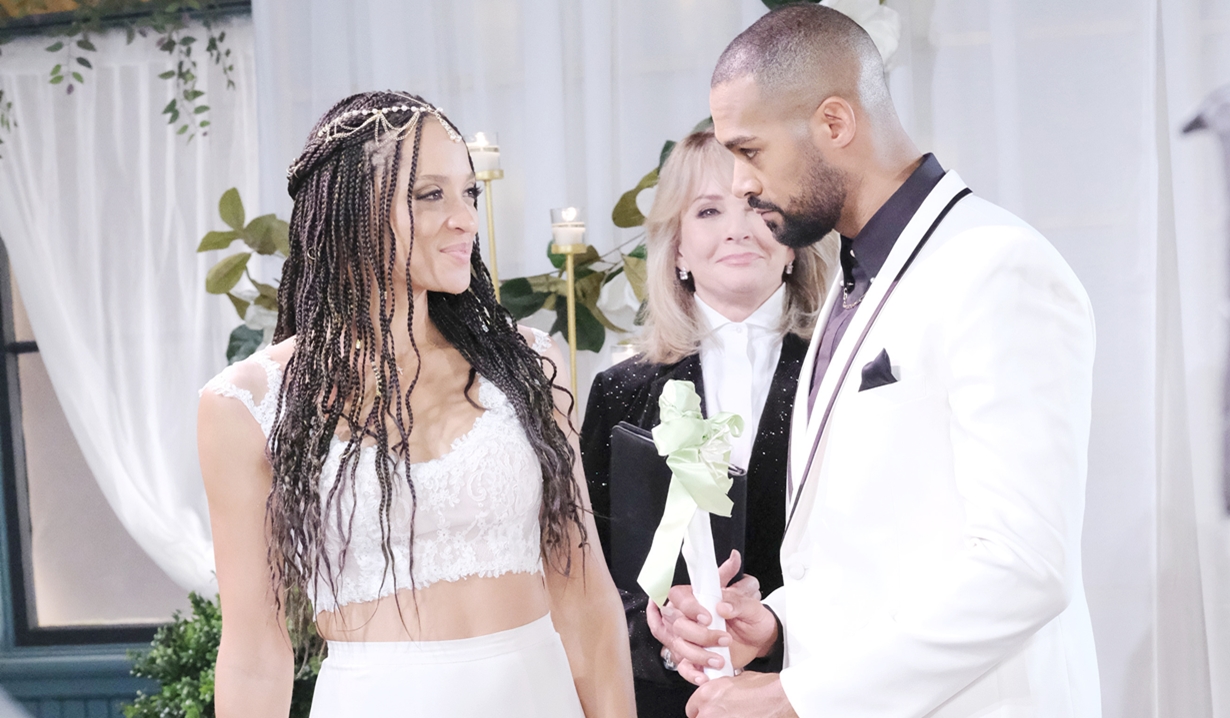 Gabi gloats that she’s free to Chad at the square. Chad still believes she drugged Abby. Gabi tells him to go after Rolf. She calls herself a danger to Chad – not Abby. She’s now free to take back DiMera. The board sees he’s distracted and negligent. Gabi says Jake Lambert’s DNA test results will change everything. She’ll be Mrs. Stefan DiMera and together, they’ll have more claim to the company. “Bye loser,” she tells him.

Rafe thanks someone named Matt on a call for taking Gabi on as her lawyer when Hope drops by his house with pizza. He’s pleasantly surprised. She wanted to see how he was. He’s fine – and got to video chat with David. He fell apart after. Hope knows it’ll get easier. They chat about Eli and Lani’s wedding and Hope admits she accepted the award. The key to the city. She almost regrets it since she just learned the ceremony is during Kayla and Justin’s wedding. They discuss Allie’s pregnancy and that Sami doesn’t know. Hope knows that this means hell to pay. Rafe apologizes for boning Sami while they were married. Hope says it’s in the past. 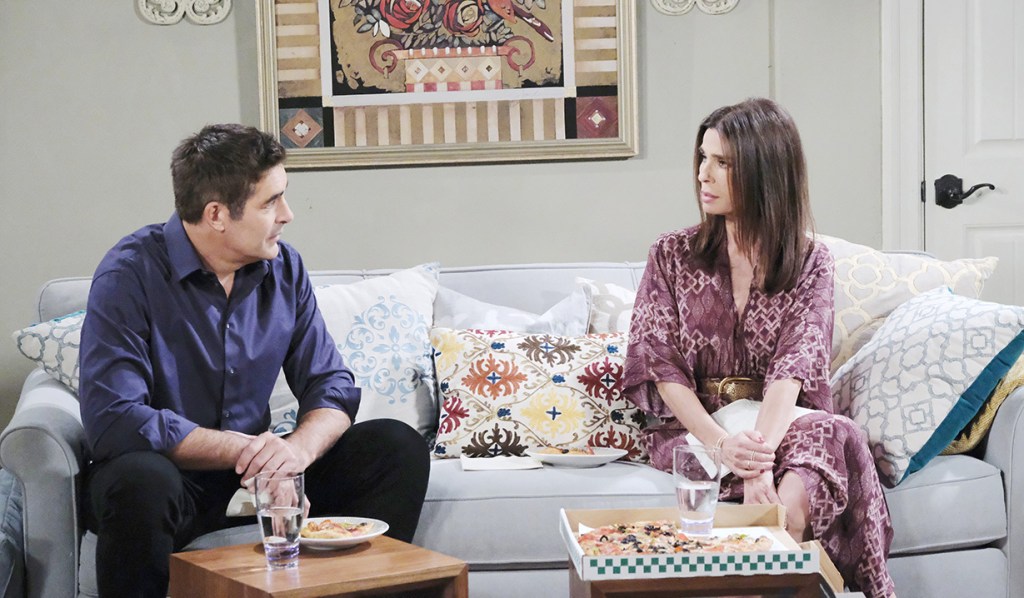 Marlena’s about to start the marriage ceremony when Tamara suddenly collapses. Everyone races to her side. Later, Tamara’s in a chair and Marlena gets her water. Eli asks Val to examine her but Tamara explains she’s fine. Her blood sugar is low. Julie bursts out with, “Oh a cookie!” Billy gives her something. Tamara needs to lie down for a while. Lani offers to put the wedding on hold but Tamara refuses to let her. She’ll go back to her hotel to rest a bit. They say I love yous. Billy offers to help Tamara across the street to Salem Inn. He just got a text about a case he’s working on anyway. They go and Marlena starts the ceremony. She says, “Marriage is about sweat, tears and sometimes an occasional diaper.” But if they really hang in there, “Something magical happens.” Marlena says last time she didn’t get to pronounce them. Julie blames Gabi and everyone rolls their eyes. Julie jokes that if you say Gabi’s name three times that she’ll show up. She says it twice and then a third and in walks Gabi. Marlena and Abe and Julie try to get rid of her. Julie calls it “trash night.” Gabi asks those in law enforcement to look into who is drugging Abigail because it’s not her. Lani becomes emotional since Gabi’s ruining their wedding. Eli reminds Gabi she cared about him. He asks her to go. She leaves and Eli promises to Lani that things will be perfect now. He notices her necklace Kristen gave her and she says it’s from a friend. Abe returns and locks the doors. Julie wishes she had. “I should have set out rat traps.” The wedding is back on. Julie reads A Birthday, by Christina Rossetti. When Marlena asks if anyone is against the marriage, everyone is quiet. Lani is glad they finally made it. A crash of glass is heard. In walks Vivian Alamain from Julie’s office. Everyone is aghast. 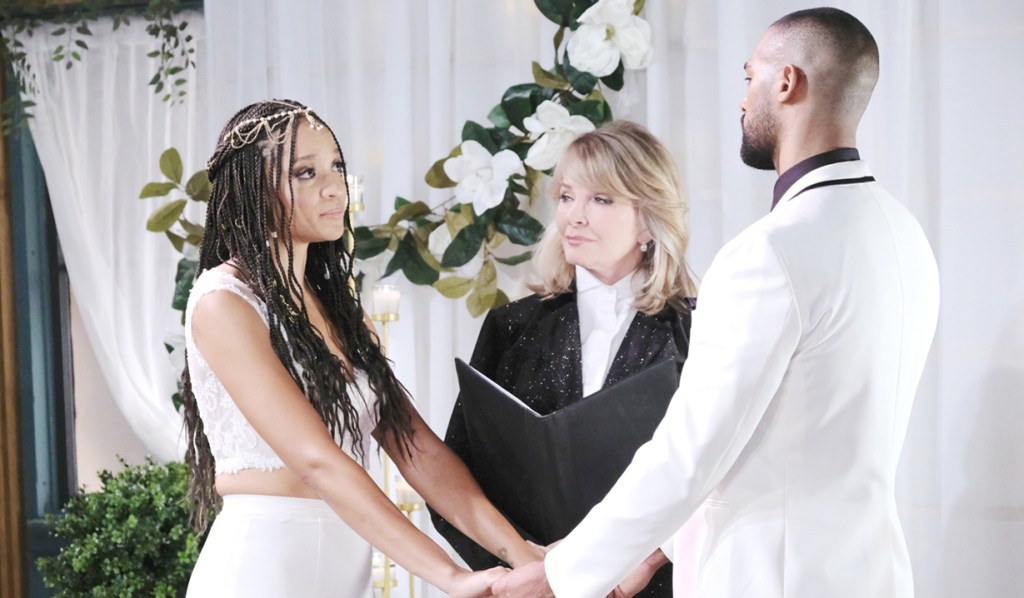 Brady senses someone watching him at the park when Kristen reveals herself. He grabs her in a hug, wondering what she’s doing here and if she’s back at the convent. Kristen says it’s just a disguise. She came to see Lani. They kiss and Kristen gushes about how amazing Rachel is. She’s cutting two teeth and she sings. Kristen left her with somebody she trusts. She shows Brady photos as Chad walks up, shocked to see his sister. He needs a favor – he wants her shares so Gabi can’t take control of DiMera. He explains that there’s an “extremely small” chance that their brother Stefan is alive. It’ll strengthen Gabi’s position. Kristen will hand hers over. She kisses her brother and they hug. Chad goes and Kristen needs to leave too. Brady says he’s going with her.

Gabi arrives at Rafe’s with a bottle, ready to celebrate. She lets Hope know that Dr. Rolf set her up. Hope leaves them alone and Gabi asks what’s going on between him and Hope. Rafe calls them friends. Gabi teases her brother. The lab calls and Gabi rushes off to find out if Stefan is alive.

Chad goes home and talks to his father’s portrait. He wonders why he wanted it so badly to be Gabi who drugged Abigail. Chad wonders if it was Stefano’s will.

On the next Days of our Lives: Claire and Ciara bond. 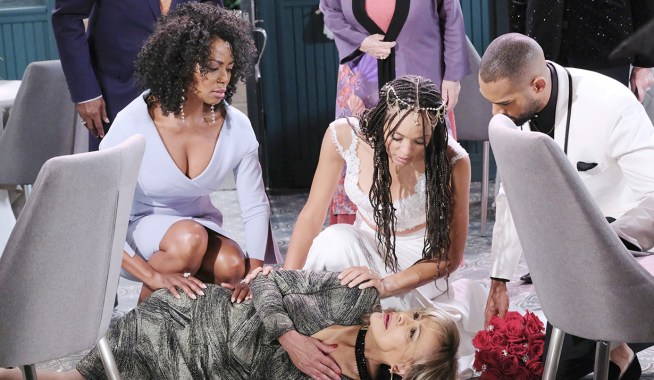 Vivian Vows to Turn Eli & Lani’s Wedding Into an Execution 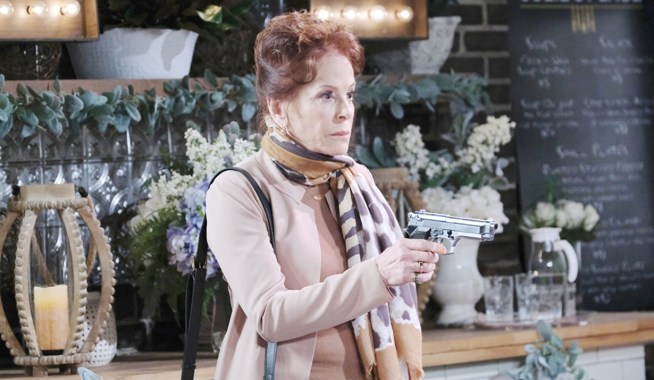