Friday June 26, 2020: On Days of our Lives today, Gwen asks Claire if she's serious about making amends with Ciara, and Gabi dreams of Stefan. 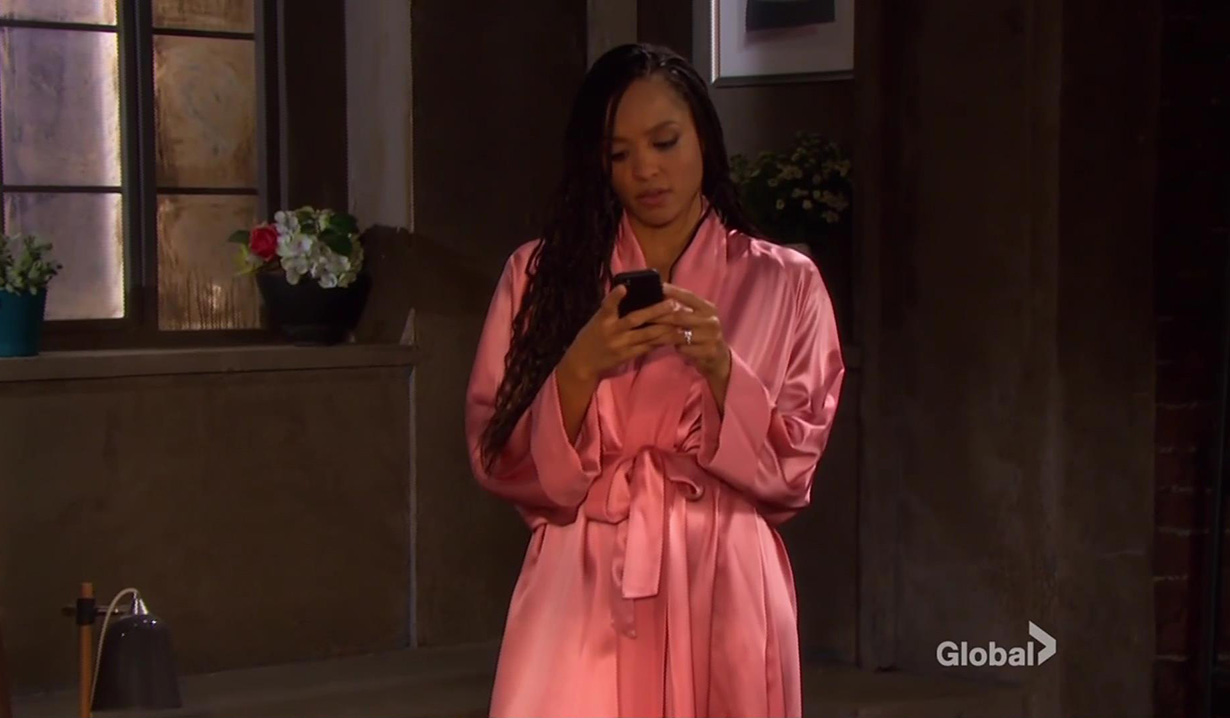 At the square, Claire tells Gwen she couldn’t get her old job back. She assumes they don’t want a “psycho pyromaniac” waiting tables. Gwen tries to make light of it. Claire’s excited to meet Ciara later. She’s going to be her maid of honor. “She’s wonderful. Really just the perfect human being,” says Claire, smiling. She credits Gwen with getting her a chance to make amends. Gwen asks if she’s serious.

At the Salem Inn, a shirtless Ben rubs Ciara’s shoulders and kisses her. He wants her in bed but she needs to meet with Claire. Ben voices his concerns. “What if she flips out again?” He motions having a lighter in his hand. 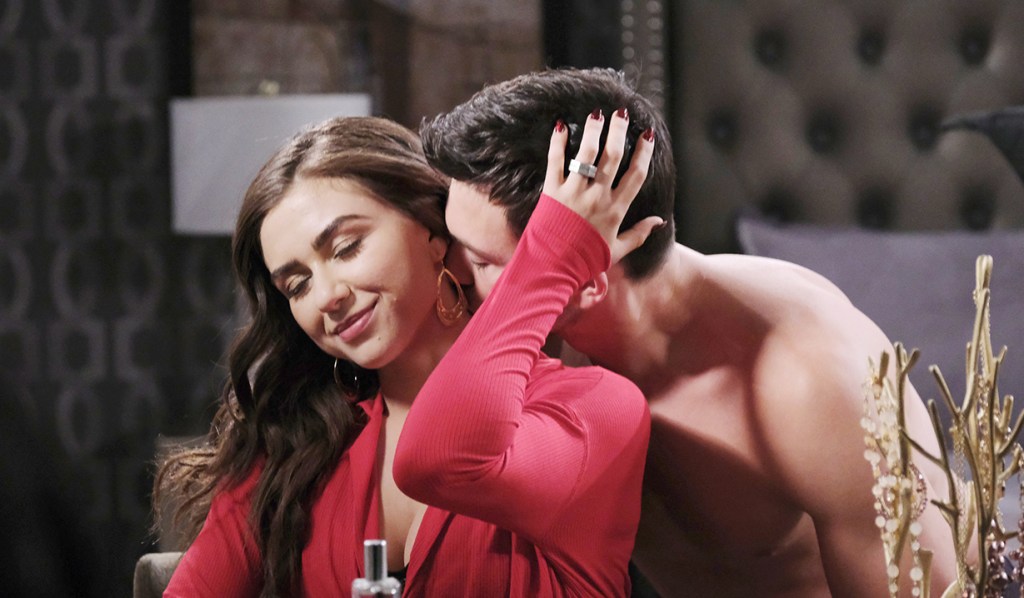 Gabi wakes up at home to Stefan bringing her breakfast in bed to celebrate the good news. “The DNA results are in and you were right all along,” he tells her. He really is Stefan DiMera. They kiss until Chad wakes her up for real with breakfast in bed. He figured she’d want to celebrate. The jury’s ready to deliver a verdict. “This could be your last meal before you head to the slammer.” Gabi declines, annoyed. Chad drinks the mimosa, proving he didn’t drug it, “the way you drugged Abigail’s drink.” Gabi denies doing it. She urges him to go see Jake and see for himself that he’s his brother. He refuses. Chad goes downstairs. Jack is playing cards with Thomas. Jack owes him $3788 dollars. They smile and Chad hears that Jenn took Charlotte to see the ducks and Thomas thinks ducks are for babies. He wants his daddy to take him to the zoo but Chad’s heading back to Florida. Chad apologizes. They miss him and Daddy can’t leave Mommy in Florida alone. He promises they’ll be back soon. Back upstairs, Gabi makes a call to the hospital but they don’t have the DNA test results back. 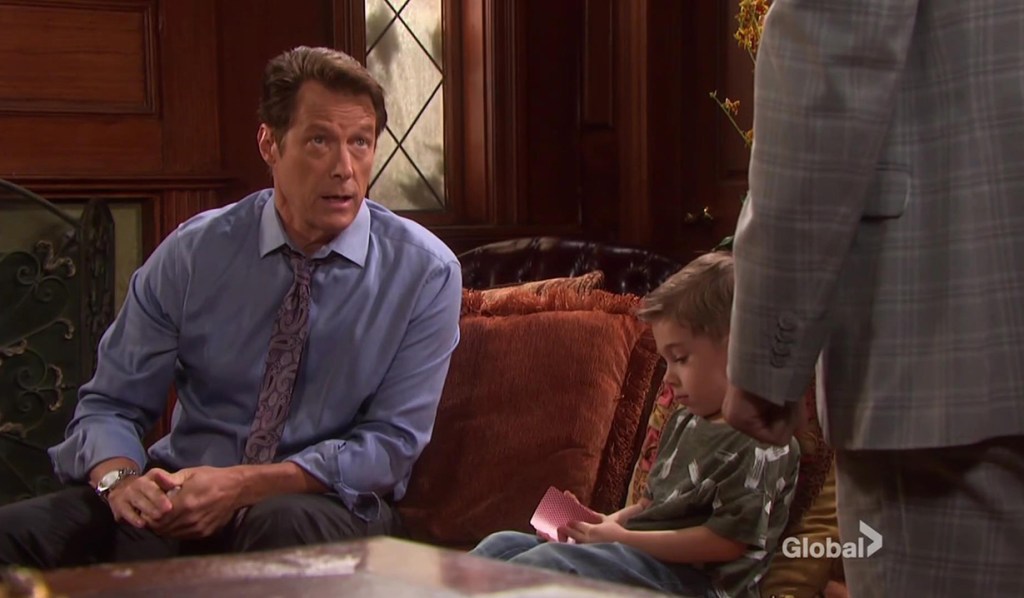 Lani wakes up at home to a bouquet of flowers from Eli with a loving note. She calls him. He wants to see her but she doesn’t want to jinx their day. Someone spies from outside. When Lani disconnects, the person lets themselves in. Lani quickly grabs her gun and sees Val standing there. “Don’t shoot!” Val yells. Lani lowers her gun. Val explains that Julie gave her a key in case they weren’t home. Val puts on an apron. She’s making Lani breakfast. Lani’s touched. They discuss the first wedding and wish Gabi was behind bars already.  Lani brings up Kristen. If it wasn’t for her, she wouldn’t have fought for Eli. Someone wanders the corridor outside while they talk. Later, Val gifts Lani a handkerchief of her mother’s with blue flowers on it so it’s something old and blue. They say I love yous and Val goes to see Eli. Once she’s gone, someone arrives at Lani’s door.

At the garage, Jake calls the mob to ask how to deliver their book when in comes Luca. He’s ready to make Jake pay for betraying the boss. Jake gives him the Crime and Punishment book which is all Luca wanted. Jake doesn’t want anything to do with the organization. Luca laughs. He knows walking away isn’t that easy.

At Rafe’s, he and Eli get up for the day. Eli’s glad they’re still friends since he gave a statement against Gabi in her court case. Rafe understands. He did what he had to do. Rafe’s happy for Eli and Lani. He asks what he can do to help. Later, Eli has Rafe ironing his shirt. They share a chuckle and Rafe gives him some cuffs. Eli’s moved. Rafe won’t go to the wedding because of all that Gabi has done to them but he wants a slice of cake. Eli’s grateful to Rafe for being his best friend. Rafe smiles and accuses Eli of being sappy. He loves him. They hug.

Back at the square, before Claire can answer if she has anything up her sleeve concerning Ciara, Ben and Ciara approach. They meet Gwen and she takes off. Claire assumes Ben heard the good news. She’s going to be Ciara’s maid of honor. Ben wouldn’t call it good news. He doesn’t trust her. Claire thinks that’s hypocritical of him. Ben accuses Claire of pressuring Ciara to be a part of the wedding. They argue and Ciara gets between them. Claire says if he and Will can get past what happened, he and Ciara should be able to. Ciara leaves momentarily and Ben says he hopes Claire’s better but he’ll be watching. He’ll shut her down if need be. Ciara returns and Ben and Claire act chummy. They’ve resolved their issues. The ladies go off to shop. 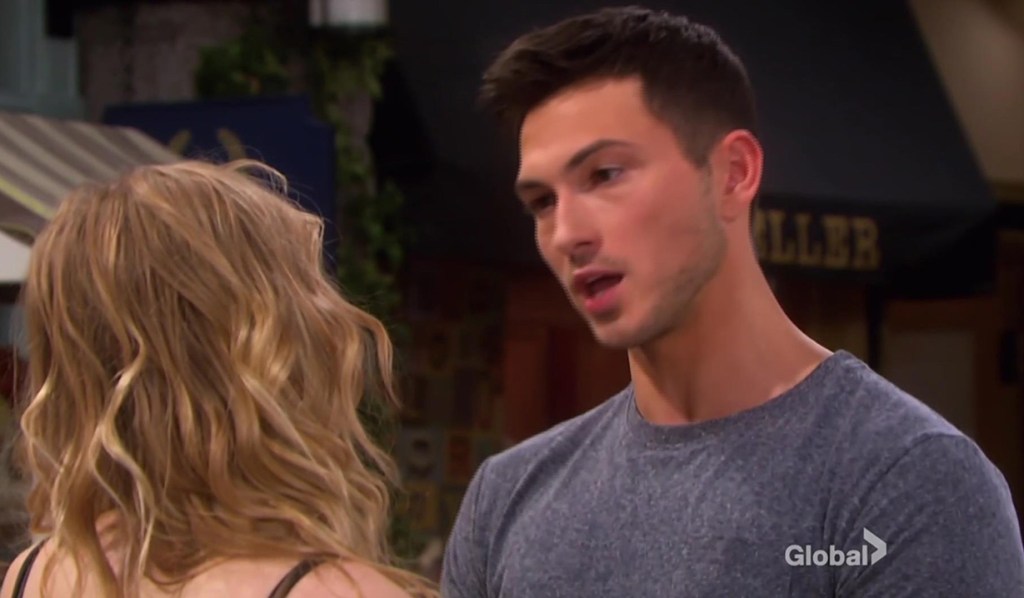 Gwen goes to see Jake at the garage. She talks about reuniting but he’s not into it. She almost got him killed. She didn’t mean to. She didn’t know the book would cause issues. “The timeline doesn’t rule it out,” he admits, causing Gwen to ask if he thinks he’s Stefan. Gwen wants another chance and straddles him. They kiss as Gabi strides in and snipes, “Take your nasty paws off my husband!”

Rafe goes to the DiMera mansion to tell Chad a verdict has come in for Gabi.

At Rafe’s, Val tells Eli about her visit with Lani and about how she feels she’s being watched.

Back at Lani’s, someone knocks on her door. Lani opens it to Kristen. She gasps and hugs her friend, who is in a nun’s habit. 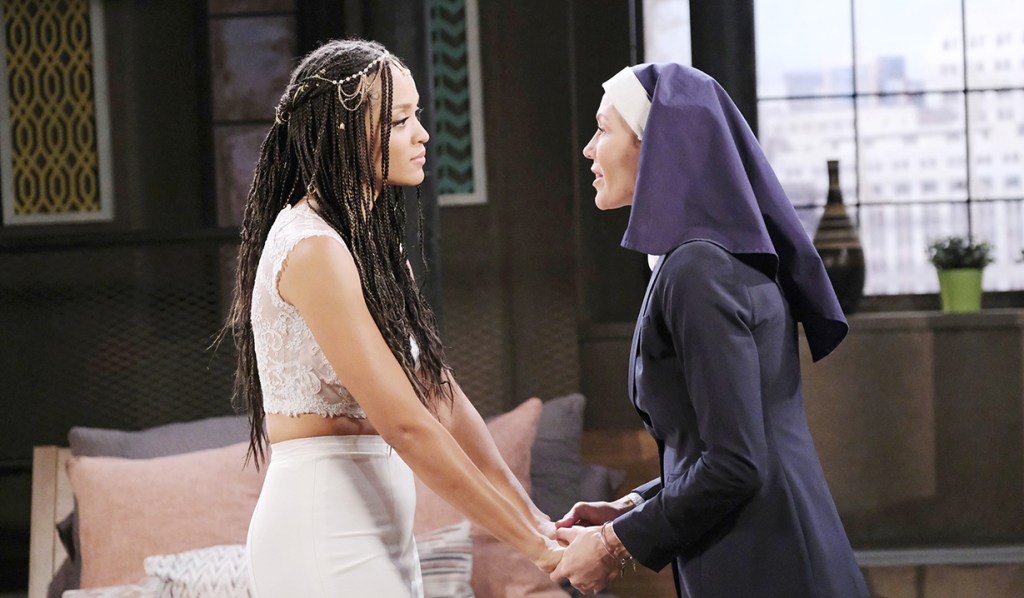 On the next Days of our Lives: Marlena comforts Brady.

Will and Sonny Are Shocked When...

Tragedy Strikes at Eli and Lani's...