Wednesday June 24, 2020: On Days of our Lives today, Steve's appalled at Jack's admission, Eli warns Brady and Victor about their plan, and Lani questions Kayla. 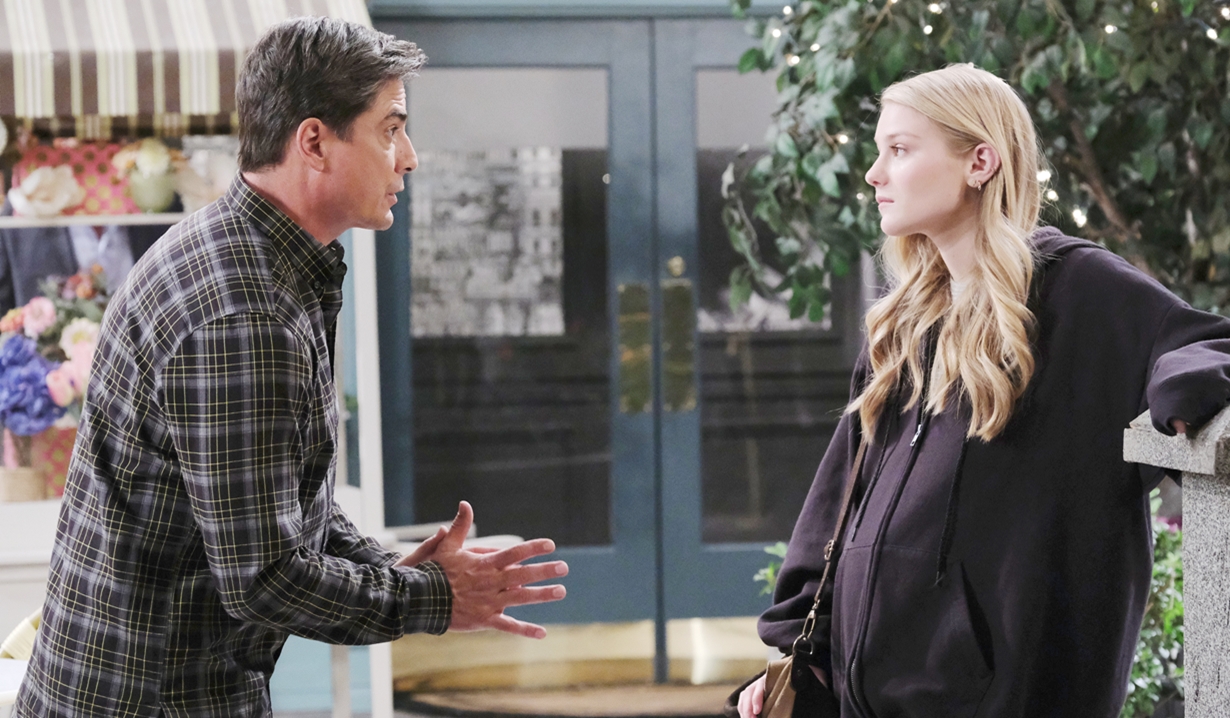 In Horton Square, Lucas is stunned by Allie’s declaration she’ll give her baby up for adoption. She doesn’t want to be like her mom, who was too young when Lucas knocked her up and warns her father to respect her decision or back off. Lucas wants what’s best for her and leaves agitated. Rafe appears and greets Allie, who shows him her baby bump. She opens up about Lucas’ reaction and giving the child up for adoption. Rafe’s supportive. She thinks he’s the best stepdad ever. Rafe believes Lucas will come around, but he’s worried about Sami. Allie admits she doesn’t know, and if it were up to her, she never would. Rafe concedes Hurricane Sami can be terrifying, but she loves her. Allie can’t handle her taking over. Rafe relays he lost custody of David. Allie’s so sorry and thinks the judge was nuts. They laugh over past good times, then Rafe gets paged to the courthouse. They embrace and agree to talk soon. Allie flashes to Rafe offering help and thinks maybe there’s something he could do. 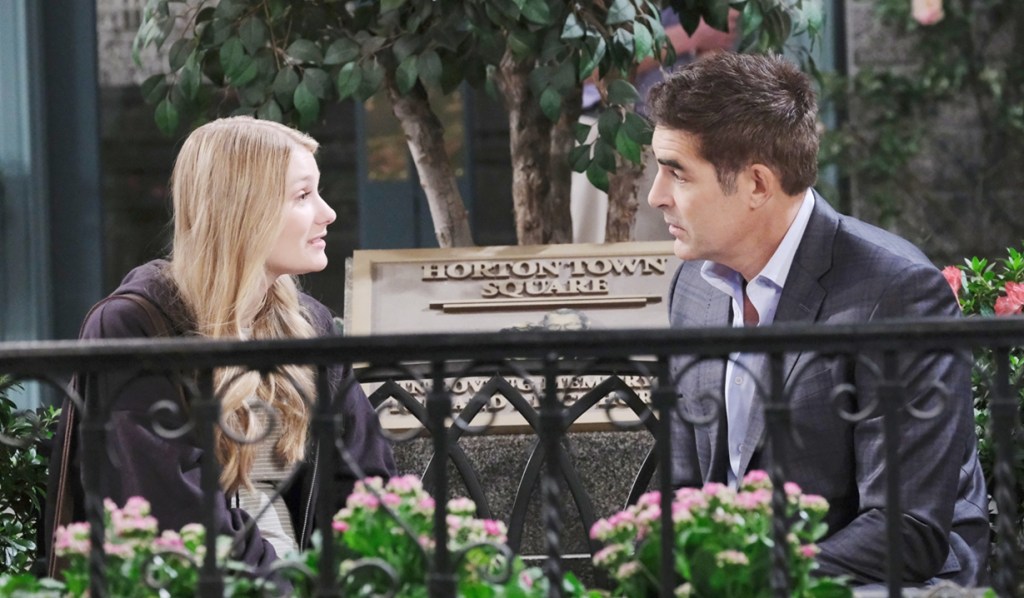 At the Kiriakis mansion, Sonny and Will discuss the prospect of adopting Allie’s baby. Sonny thinks Will’s sister showing up was the universe making their decision for them. Will agrees it seems perfect and asks if Sonny would be okay with the child being his blood? Sonny thinks that makes it more perfect. They kiss. Lucas enters as they discuss approaching Allie. He asks for their help to convince Allie not to give her baby up for adoption. Will and Sonny exchange a look and think it’s her choice. Lucas doesn’t want her to give it up to strangers. Will asks, “What if they weren’t strangers?” He relays they were thinking they could adopt Allie’s baby. 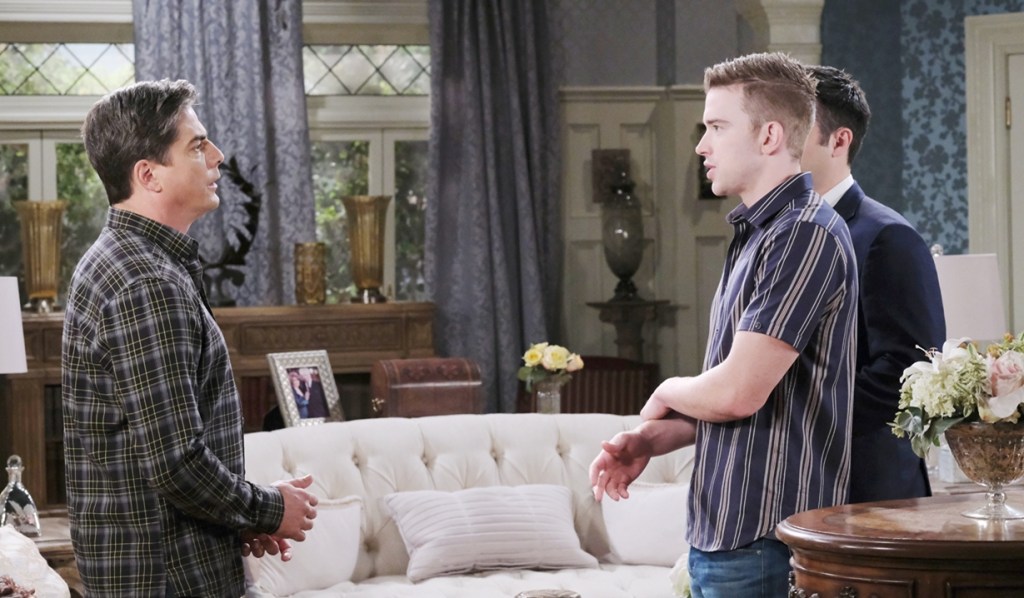 Jack comes upon Steve at the coffee shop. Jack’s hoping justice will be done at Gabi’s trial. He learns Steve’s working again and thinks it beats drinking. Jack needles Steve to tell Kayla he loves her. Steve feels he’s screwed her life up enough. Jack protests and recounts how he and Jennifer were like magnets pulling back together. Steve’s adamant he won’t tell Kayla he loves her and insists Jack keep quiet. Jack sheepishly admits he told Jennifer. Steve’s appalled and tries to order a beer. Jack hedges that Jenn thinks Kayla has a right to know but he shut her down – Kayla should hear it from Steve. He warns the clock’s ticking. 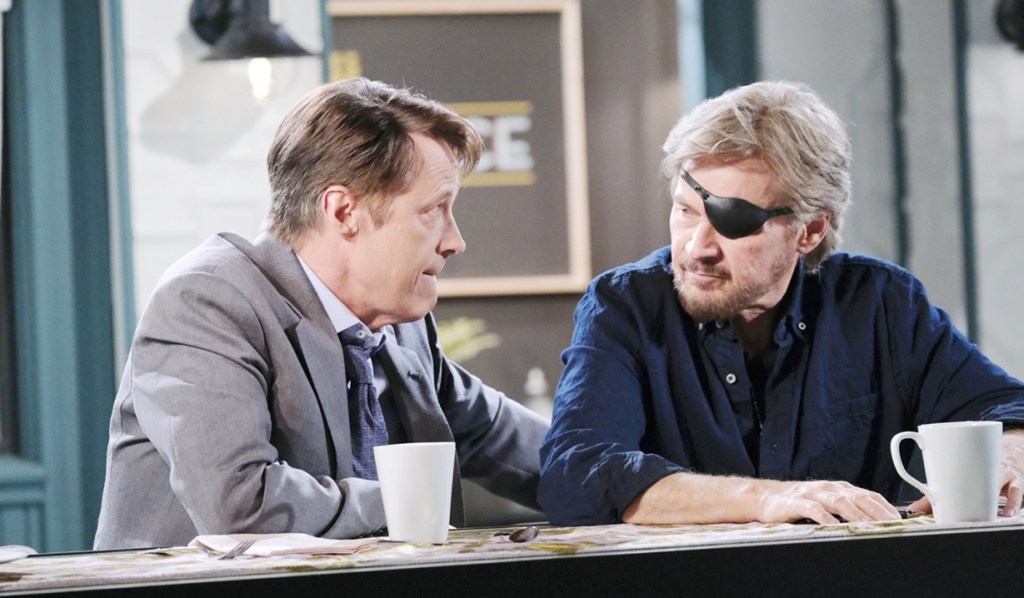 At Brady’s Pub Lani’s being watched as she reads her menu. She’s startled when someone touches her shoulder – it’s Kayla. They discuss Lani’s trepidation about her pregnancy and Kayla encourages her to enjoy this wonderful time. Lani hopes their wedding goes way better than the last one. Someone watches the conversation through the window. Meanwhile, Lani hopes Gabi gets what she deserves and reiterates she won’t let anyone ruin her special day. She admires Kayla’s engagement ring and learns they’ll marry on July 10. Kayla reflects any date except July 25 worked as that’s when she married Steve. She flashes back and muses it was ‘pure magic’. Lani wonders if she’s sure it’s all history now. Kayla insists Justin’s her present and future. She has no intention of looking in the rearview mirror. Kayla reassures Lani again before leaving.

At Titan, Eli digests Victor’s admission that he lied about Kristen stabbing him. He flashes to Lani talking about allowing her to escape and asks why Victor would set her up. Victor wanted her out of Brady’s life. Eli doesn’t believe him. Victor’s unconcerned. Brady interjects that his grandfather is a hateful old man. Victor was hoping their relationship would implode. Eli learns he’s now decided it was wrong to keep them apart. Victor wants the charges dropped, but Eli explains it’s not that simple – the D.A. will have questions, such as if Kristen didn’t stab him, who did? Victor grumps, “Maybe it’s none of your damn business,” and suggests it was an underworld enemy or he knifed himself when Vivian Alamain showed up naked. Eli reminds them that Brady will be arrested if Kristen’s removed from the equation – he confessed and had the murder weapon in his hand. Victor will refuse to testify against Brady. Eli says he’ll be charged with perjury for protecting his grandson and suggests they decide if they were lying then or now. Eli gives a final warning, then leaves. Brady curses and asks if Victor has any miracles handy. Vic feels they’ll have to leave Kristen on the hook. Brady protests. Vic reiterates there’s nothing they can do.

Eli joins Lani at the pub and updates her on his meeting with Brady and Victor. He doubts they’ll pursue it. Outside, someone watches.

In the park, Kayla runs into Steve.

Victor Tells Eli He Lied About...

Will and Sonny Are Shocked When...