Dr. Rolf Reaches Out to a Mystery Person, Vowing Not to Implicate Them in What Happened to Abigail

Monday June 22, 2020: On Days of our Lives today, Chad returns home, Rafe tries to get Rolf to come clean, and Ciara accepts Claire as her maid of honor. 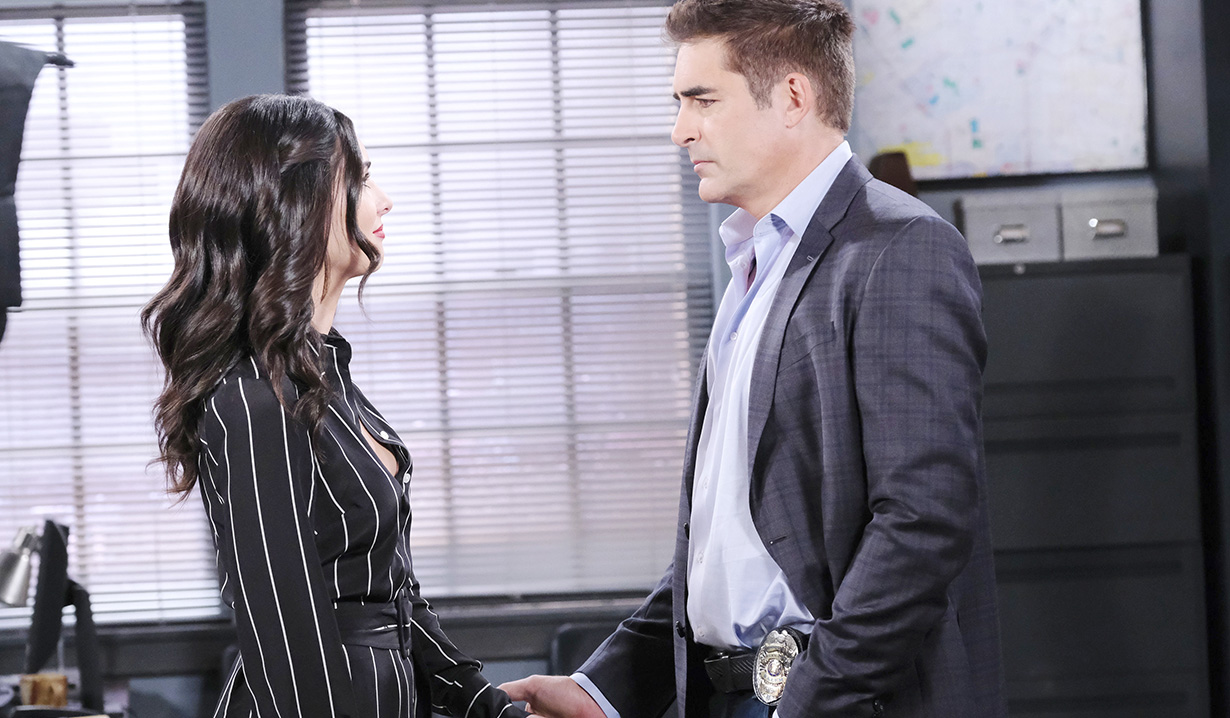 At the townhouse, Hope asks Marlena if Claire is really okay. Hope’s concerned for her mental health and asks if she’s expressed jealousy of Ciara and Ben’s wedding. In her room, Claire holds the Save the Date card in her hand and doesn’t look happy. She heads to the living room and Hope hugs her. She says she’ll tell her the same thing she told her each time she visited her in Bayview. “I love you.” Claire loves Grandma Hope too. She again apologizes.

At the garage, Gwen demands an apology from Jake. He tells her he’s sorry. He’s sorry she’s such an “insane, insecure bitch.” She slaps him. He grabs her in a passionate kiss and she responds and then pulls away. He kisses her again and they pause to laugh that this is what happens whenever they fight. They head to his bedroom but Ben stops them. He bitches at them about the book but Gwen tells him to back off. She didn’t know how valuable the book was. They were discussing it and got distracted. Ben doesn’t care. They need the book back. It’s a matter of life and death. Gwen leaves and Jake calls her jealous and possessive. If he so much as opens a door for a woman or smiles at a waitress, she goes nuts. “Like a roller coaster from hell.” Jake knows she’s bad for him but he can’t help himself. Like those nachos Ben likes so much from across the street.

At the DiMera mansion, Gabi’s surprised to see Chad has returned from Florida. He wouldn’t miss watching the DA rip her to shreds. He gloats that he’s being called in as a witness. He blasts her for drugging his wife but she denies it. They argue and snipe at each other. When Jack turns up, Gabi tells him she’s grateful to see him. She says Chad would have killed her if he didn’t show up. She takes off and the men talk about making Gabi pay. Jack asks how Abigail’s doing. Chad calls his wife a fighter and says it’s not easy to watch her go through this but he’s grateful for her top-notch care. She’s having good days when they think the treatment is working and then she hallucinates. The drug altered the chemistry of Abby’s brain and the doctors are not sure they can reverse it. They may not get the Abigail they know back. Chad reveals that Abigail wants him to stay in Salem. Jack would prefer if he stayed there. Jack thinks of him as his son. Chad says Jack’s been like a father to him, too. Chad takes off to the courthouse. 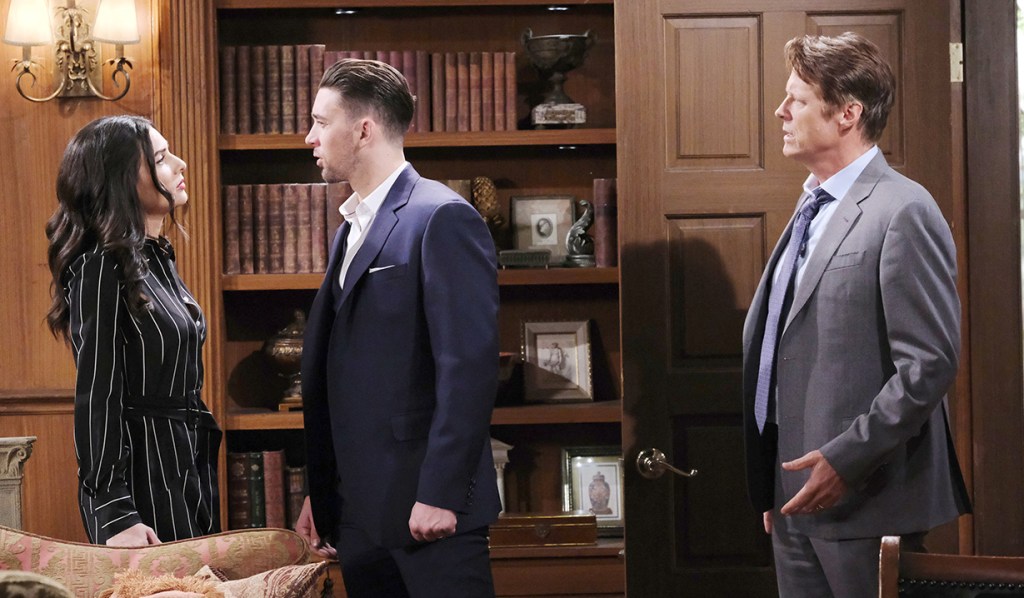 Rafe visits Dr. Rolf in Statesville and asks what Rolf has done to his sister, Gabi. Rolf puts on an innocent act but Rafe reminds him he gave Gabi a hallucinogenic, the same one Abigail was given. “You set her up.” Rolf denies it and claims he doesn’t have an axe to grind with her. Rafe tries to cut him a deal – no more jail time if he tells the truth. He’ll talk to the DA. Maybe he’ll get Rolf transferred to a better facility – a room with a view. Rolf admits – in a roundabout way, as a theory, that he set Gabi up.

Shawn visits his little sister at Salem Inn. Ciara’s happy to see him. He heard she had quite the past few days. Ciara tells him that Gabi and Ben are fine – as is she. “Even after seeing Claire?” Ciara admits she was freaked out upon seeing Claire but Claire apologized and wants to make things right. She also wants to be the maid of honor. Ciara worries Claire will make her wedding all about her. Shawn feels bad. He wants Ciara’s happiness – and Claire’s. This decision is Ciara’s. Ciara feels pressured so Shawn asks if there are other candidates. Ciara doesn’t have any other friends. Shawn says if he wants her to be in her wedding party, she could set boundaries. Ciara knows. She laments that she’s given Ben her forgiveness and every chance. She defended him for two years! What kind of person would she be not to do the same for Claire? 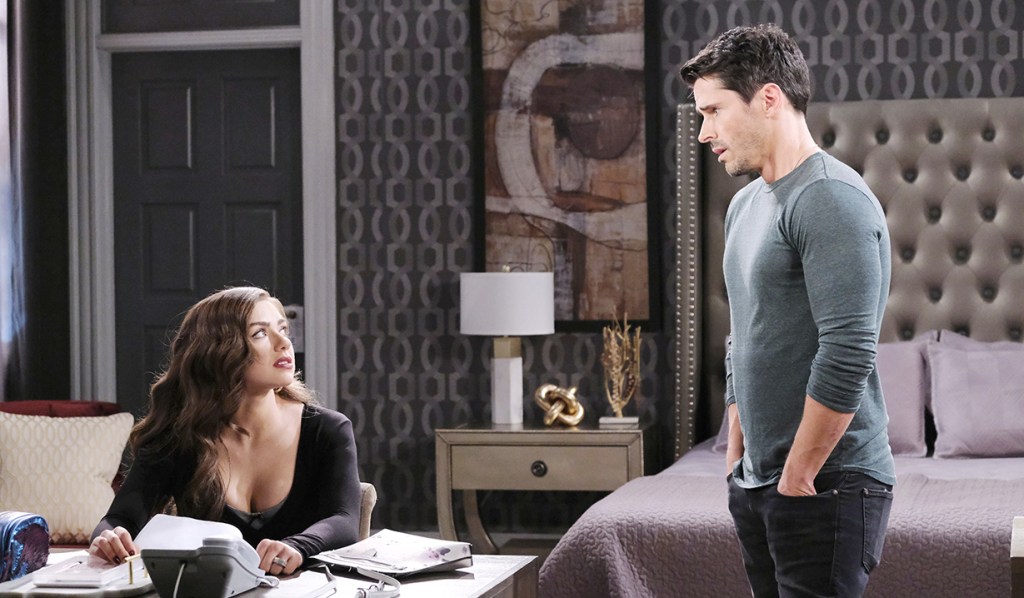 Gwen arrives at the townhouse, looking for the book to give Jake. Marlena thought she gave it to Jake. Later, Gwen has taken the book and left when Shawn and Ciara arrive. Ciara tells the room that Claire asked to be her maid of honor. And to that, it means she’s asking for her friendship. Ciara knows that at her core, Claire’s a good person who comforts and supports her and makes her laugh harder than anyone. Her wedding can be the place that they can find the joy again. She wants Claire to be her maid of honor. Claire sobs as she thanks Ciara and hugs her.

At SPD, Rafe tells Gabi that in a roundabout way, Rolf admitted to setting Gabi up but it’s not enough to help her. Gabi becomes emotional. She thanks her brother for helping and thinks it’s going to look bad for her. She cries about going to prison again for something she didn’t do. They head to court.

Gwen returns to the garage with the book and asks for Jake’s apology. Jake apologizes. He says he’s sorry for flirting but he’s never cheated. “Even with your little wife?” Jake says that’s all in her mind.

Dr. Rolf calls someone from prison. He tells them about Rafe’s visit and says not to worry. He refuses to implicate them in what happened to Abigail. He disconnects and laughs.

On the next Days of our Lives: Victor confronts Brady about his true intentions concerning Titan.

Allie Makes a Decision on Whether or...

Victor Tells Eli He Lied About...