As Jake and Ben, Lani and Eli Attempt to Save Gabi, Two People Are Shot

Thursday June 18, 2020: On Days of our Lives today, Jimmy thinks Gabi's nuts because she thinks Jake is Stefan, back from the dead, Xander does something sweet for Sarah, and Brady's missing Kristen and Rachel. 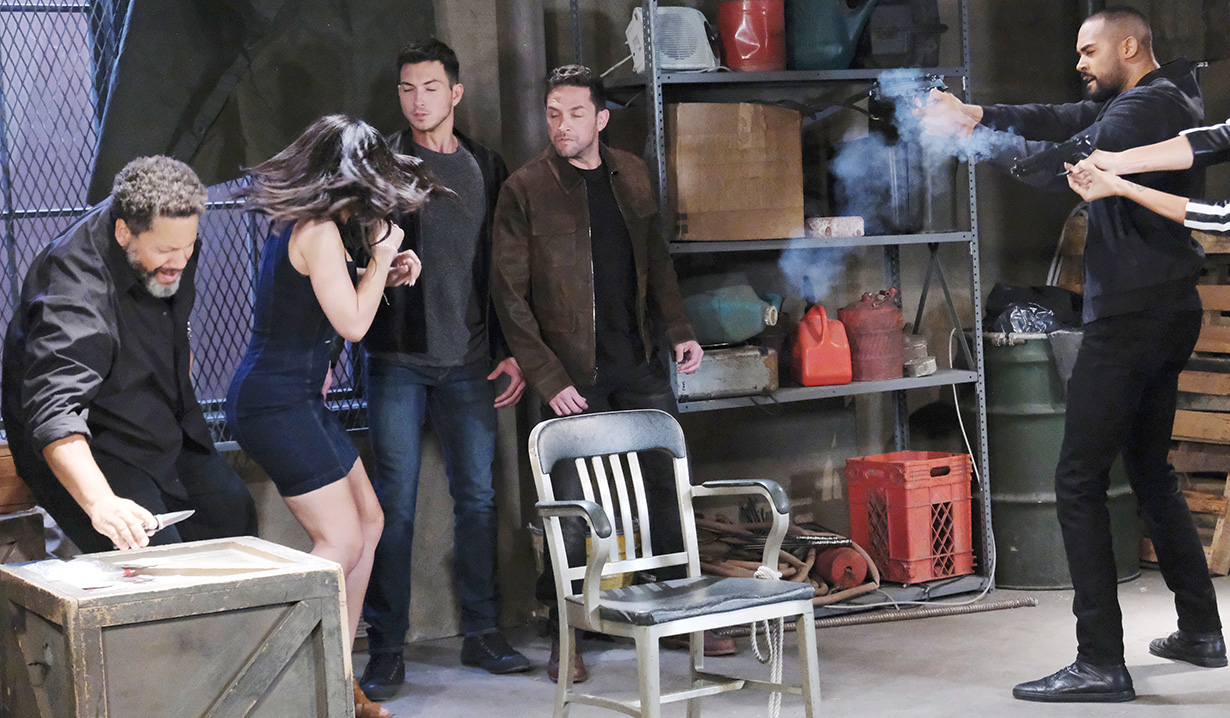 In the warehouse, Jimmy and Gabi lecture each other on honor. Luca, played by James Black, who is the right-hand man of the mysterious mob boss, arrives. Jimmy calls Gabi Jake’s wife. Luca’s confused. Where’s Gwen? He assumes Gabi’s Jake’s sidepiece. Gabi balks at being called that. She yells at him and he calls her feisty. She learns that they have known Jake for a year and a half. She tells the men that Jake is really Stefan DiMera with amnesia. She explains Rolf bringing him back and Luca laughs. 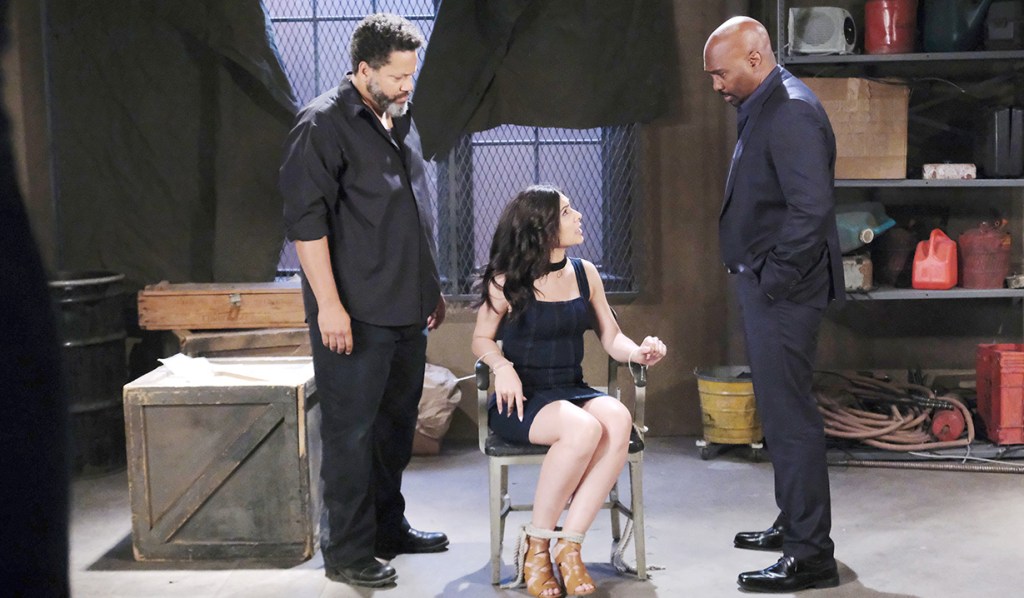 At the townhouse, Claire introduces her grandparents to Gwen. They’re shocked to see her and wonder how she got in. Gwen apologizes and explains she asked Claire to keep quiet. Gwen calls Claire her only friend, who convinced her to come forward with the book that belongs to Jake that could help set Gabi free. She didn’t know until now how important this is and explains that it belongs to a mob boss. They call Ciara and wait for her to return their call. Gwen asks how Gabi got involved. John explains that Jake looks like Stefan DiMera, Gabi’s dead husband. He died almost two years ago. Claire and John realize it’s possible that it’s him. His memories may be implanted. Gwen gives them a ‘what the heck’ look. Marlena lectures Claire about lying to them twice in the one day they’ve been with them. If she does it again, she’ll send her to Hong Kong. Claire freaks out. Gwen comes to Claire’s rescue. Claire made her see she needs to do the right thing to turn the book in, instead of using it for profit. 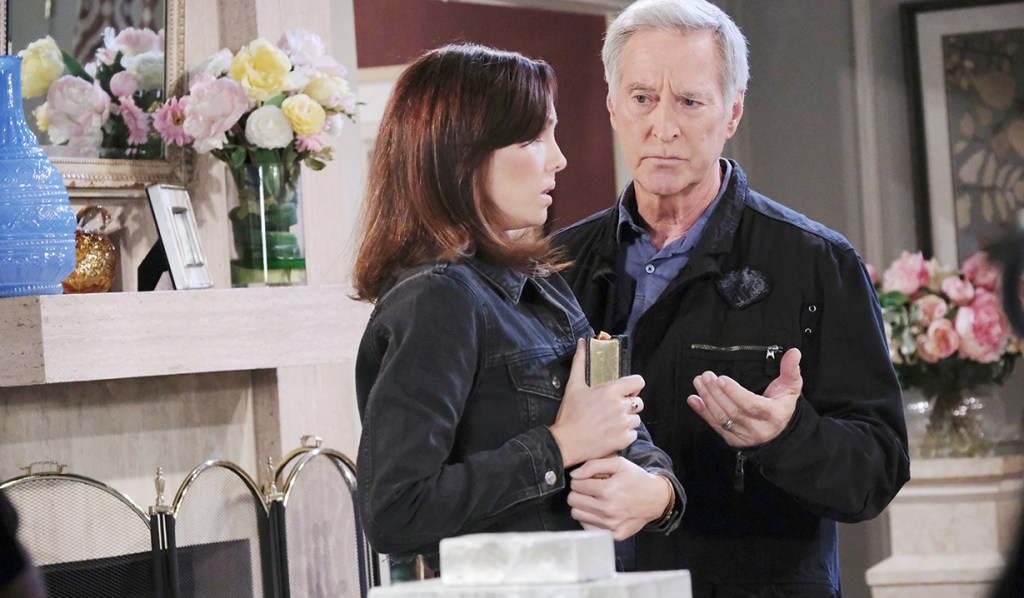 Eli and Lani watch from outside of the Kiriakis mansion. They wonder what’s going on and what the book has to do with anything. Inside, Jake scribbles names and numbers inside the Crime and Punishment book. Ciara grabs the book, demanding to go with them. Xander appears and grabs the book. He’s in the middle of reading it and doesn’t want to give it up. Xander sees Jake and realizes he’s a dead ringer for Stefan. He refers to Jake as Stefan and tells them that he relates to it. He tries to get it and they wind up fighting for it. He lets go of it and indignant, he leaves as Lani and Eli scramble to hide. They overhear him muttering about a book saving a life. They hide when Jake and Ben come out and when Ciara heads back inside, they track the men. 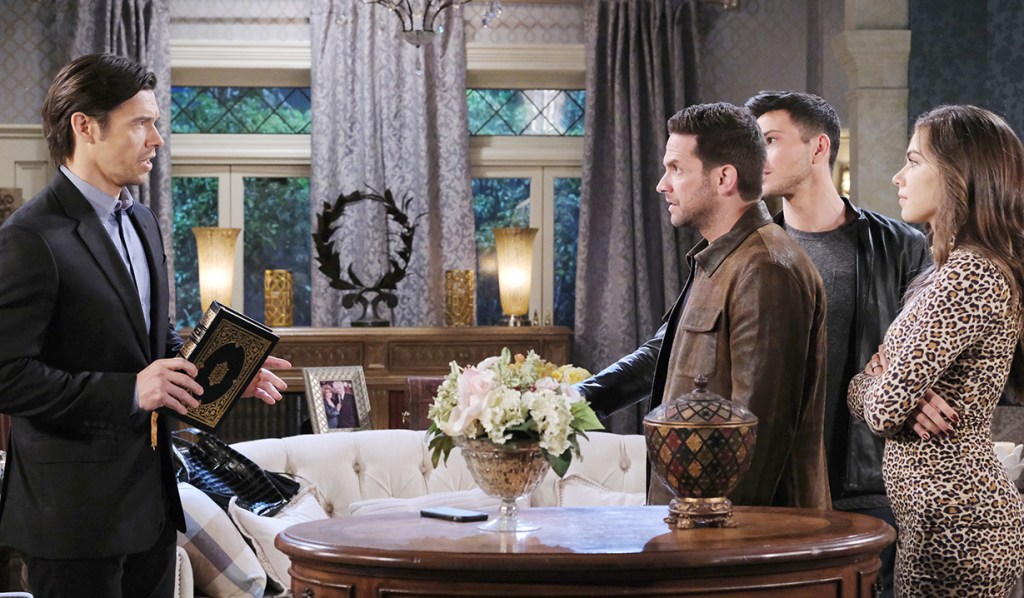 At Salem Inn, Sarah and Brady are in bed, feeling awkward. “Sooo that happened,” Sarah says. She apologizes and feels like it’s her fault. Brady doesn’t want to talk about it but Sarah feels now that she did this without thinking. Brady says it’s never happened to him before. Sarah thinks it’d have been a big mistake anyway. Brady says they don’t even have to talk about it. He admits he wanted to go through with it but he couldn’t stop thinking of Kristen. Sarah says, “Aww.” She gets it. Brady says he didn’t mean to offend her. She gets it. She was thinking of Xander. Both feel terrible and now Brady feels he’s betrayed Kristen. Sarah can see he really loves Kristen. Brady doesn’t think it’s her fault that she had to leave with the baby. Sarah says, “Well…” Brady says he understands why she stabbed his grandfather. Xander arrives at the door. Sarah answers it with underwear and Brady’s shirt on. Xandy asks her to go with him somewhere. She reluctantly agrees. Once they’re gone, Brady looks at Kristen’s photo and misses her and Rachel. He tears up, unsure how he can get over losing them. 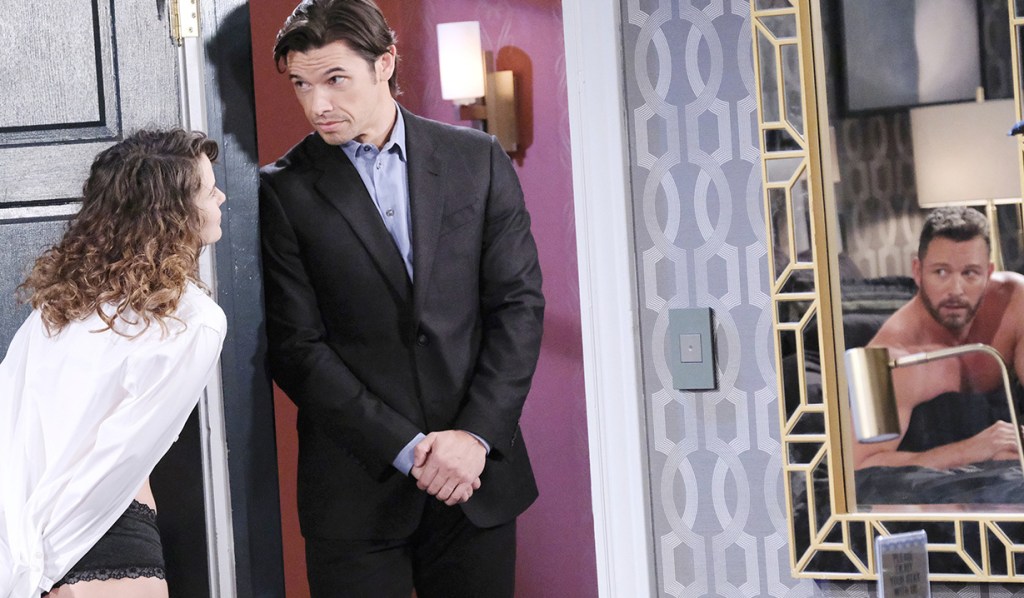 More: Kristen reappears back in Salem on Days

Jake and Ben arrive at the warehouse. Jake greets Luca, who is the mob boss’ right-hand man. Jimmy sets Gabi free but holds a knife to her throat while Luca looks at the book and claims it’s fake. The cops rush in and shoot Luca. Lani starts to feel sick and tells Gabi she’s pregnant but has morning sickness and that it’ll go away if she just lies down. Gabi elbows Jimmy and gets down while Jimmy’s shot.

Sarah and Xander wind up at the cemetery where he shows her he had a stone made for Mackenzie’s grave. Sarah immediately breaks into tears. “It’s perfect,” she whispers, sobbing. Xander wanted to spare her the pain of choosing a headstone. He leaves her alone, saying the car will wait for her. 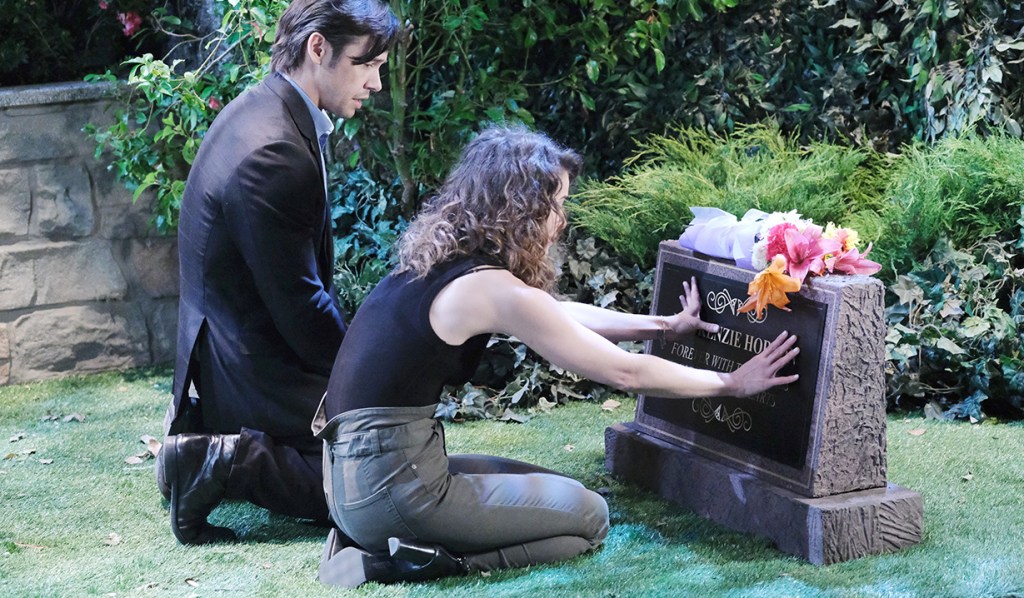 Ciara arrives at the townhouse. She sees Gwen with the book and tells everyone that Jake and Ben are passing off a fake book to get Gabi back. Gwen looks pained. She gives the book to John who will run it to the kidnappers. Ben calls Ciara with an update. Everyone is relieved that Gabi’s fine but Gwen is concerned that this is far from over. Meanwhile, at the warehouse, Gabi thanks Jake for saving her. He asks if she’ll let it go that he could be Stefan. She won’t. Ben returns to tell them about Gwen being with John and Marlena.

Xander returns to Brady at Salem Inn with an apology for how he’s treated him and Sarah.

On the next Days of our Lives: Nicole questions Allie.

Gwen Turns Up at Claire’s With the...

Allie Makes a Decision on Whether or...