Allie Hasn’t Decided What to Do About Her Pregnancy, While Will and Sonny Learn They Were Turned Down by an Adoption Agency

Monday June 11, 2020: On Days of our Lives today, Lucas searches for Allie in Salem, Will learns that an adoption agency turned them down, and Eli and Lani set a wedding date. 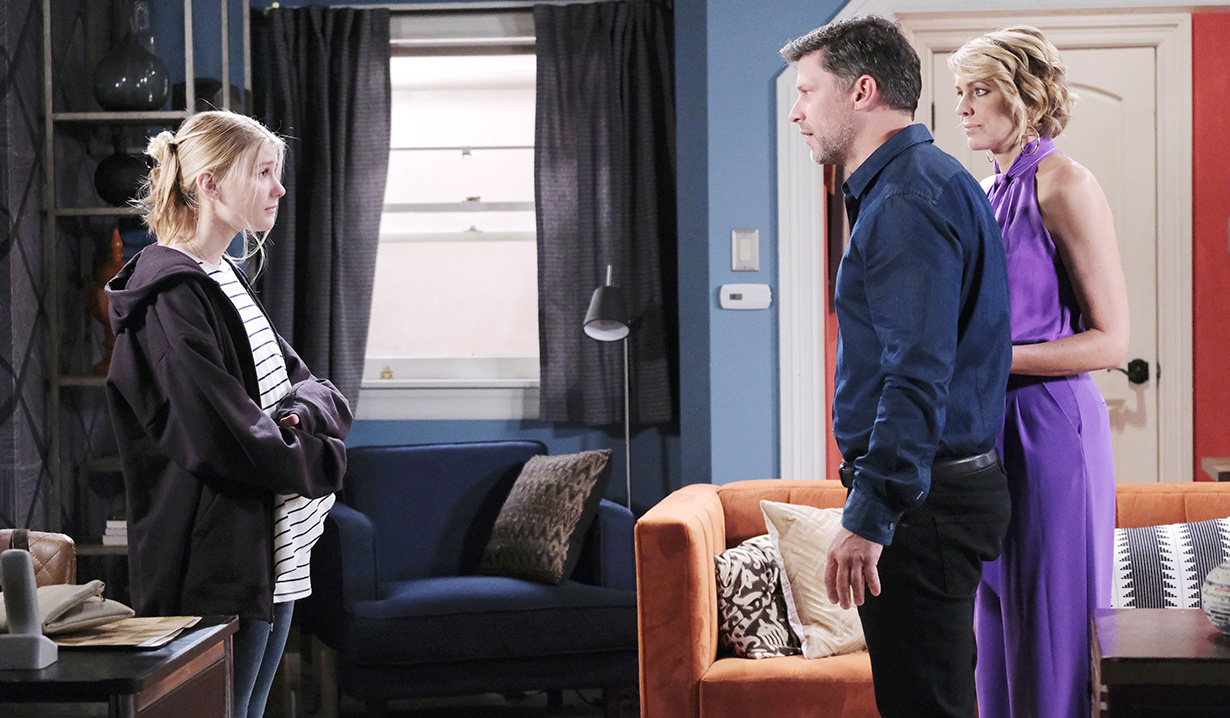 At home, Lani snaps at Eli over her pregnancy and immediately apologizes. She’s hormonal. “I think hormonal looks really great on you,” Eli says, twirling her around. They kiss and laugh. Lani’s about to nap but they need to make wedding plans. She’d like to have a quiet and simple wedding. Eli wants to marry her July 4. It’s the day he proposed to her two years ago. They flashback to the park where he got on one knee and they became engaged under the fireworks. They kiss and Eli wants sex but Lani says there’s no time. 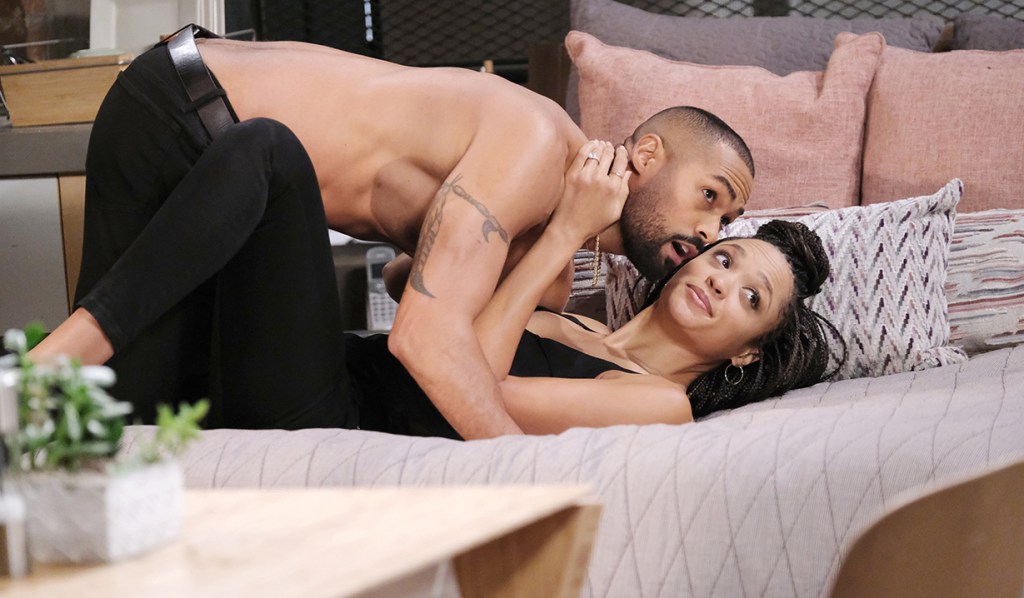 From the Kiriakis mansion, Will calls Abe. They discuss Gabi. It hasn’t been 48 hours so Abe can’t file a formal report. Rafe’s out of the office so Abe offers to go to his house to tell him Gabi’s missing. They disconnect and the adoption agency calls with an issue. Later, Will tells Sonny the agency turned them down. Will thinks they were homophobic. Sonny says there are other agencies and surrogacy.

At Rafe’s house, Hope comforts Rafe over losing David. She thinks Zoey was being sincere when she offered him to be a part of David’s life. Hope sends him upstairs for a shower. Abe arrives and Hope tells him the judge awarded custody to Zoey. Abe feels terrible for Rafe. Hope’s packing the rest of David’s things and admits to Abe that Rafe’s in shock. Hope asks why Abe says Gabi’s been missing but he thinks Rafe’s got enough on his plate. They have others who can handle it. He lets Hope know there’s a spot for her if she wants to return to police work. She laughs and says no and then brings up Kate trying to convince her and Steve to take the key to the city. Abe’s sorry. That was Kate’s idea and he was opposed to it but he realizes it’s a good thing. They saved lives and deserve the award. She agrees to think about it. Abe goes and Rafe returns. She tells him Abe stopped by but doesn’t explain why. Rafe remembers going through losing Sami’s kids when they broke up. He thought David was a gift. Maybe he isn’t meant to be a father. He lost touch with Sami’s kids. Hope reminds him Ciara loves him and always will. She apologizes for not wanting kids while they were together. It wasn’t right for her but she assures him it’s not too late to be a dad.

At the DiMera mansion, Lucas is surprised to hear Allie bought a plane ticket to Salem. Kate assumes she’s coming to surprise her but her flight landed hours ago. She says she and Allie are a lot alike, funny, smart, and kind-hearted. Lucas snorts. “Kind-hearted.”

More: Admit it – Nicole Walker has become too tame

Eric and Nicole are shocked to see Allie’s pregnant belly. “Oh. I could use a drink,” Nicole exclaims. Allie feels fine, huge, and freaked out. Eric asks what’s going on. She hasn’t told anyone in the family and reveals she’s confused right now. Nicole understands. Eric says their place is small, which Allie takes as him kicking her out. Eric clarifies that once the baby is born they’ll need a new plan for her since there’s no room for a baby. Allie has no plans. Her parents don’t even know. Nicole reminds Allie that Sami was young when she had her. Eric asks after the father and how he’s dealing with this. Allie looks away. She leaves the room and Nicole asks Eric to be more sensitive and asks him to stop interrogating her. “You’re reacting the way she thinks Sami will.” Eric retorts, “You mean I’m acting like a Brady.” He apologizes to Allie and they embrace. She asks him to keep the baby a secret. They’re not sure they can do that. Besides, in a few months, there is going to be a baby. “Not necessarily,” Allie suggests. 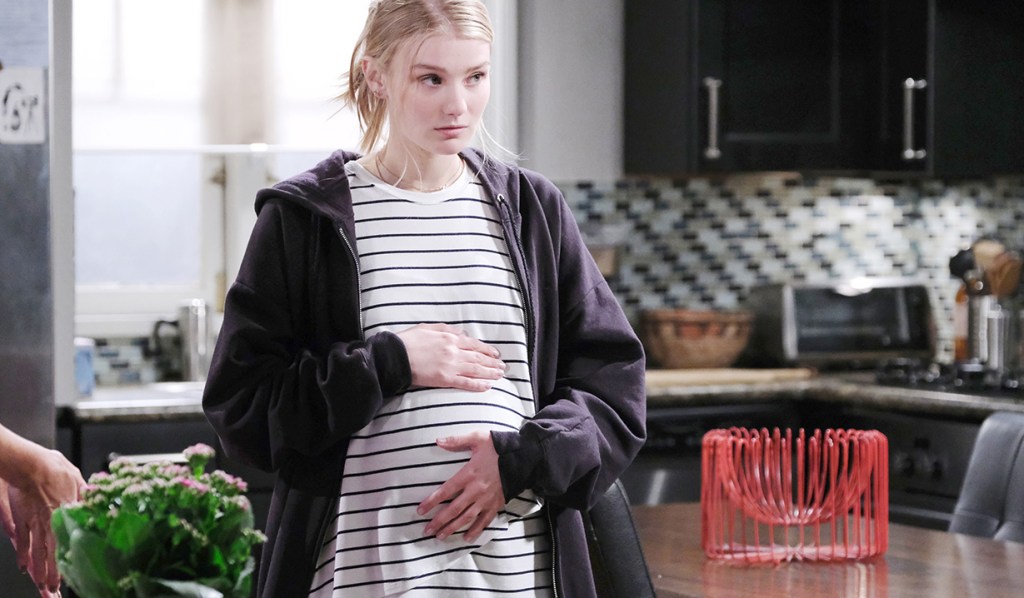 Lucas and Kate arrive at the Kiriakis mansion. Will hugs his dad and learns they’re there looking for Allie. Lucas explains that Allie got sucked back into the party scene and thinks it’s good that she came back home. Kate goes to call John and Marlena to check if she has stopped there. Lucas suggests they locate Allie before telling Sami. Will asks, “Why? You don’t think Mom would overreact do you?” Lucas laughs and sarcastically says, “No.” Kate returns – John hasn’t seen her. There’s one more person she’d go to. Kate assumes there’s something wrong which is why she’s hiding. She and Lucas leave and Will remembers acting out as a kid while Sonny admits he didn’t. He wonders if they’re up for raising a teenager. Will thinks so.

As Eli and Lani are on the bed kissing, Abe turns up. Eli throws on a shirt and lets Abe in. They tell him they’re marrying July 4. He tells them he has a job for them that they’re not going to like. He fills them in on Gabi’s disappearance and Lani thinks she just skipped bail. Abe knows he doesn’t like Gabi but Will and Sonny are worried. Lani asks why Rafe can’t look for her. Abe says Rafe lost custody of David. Lani looks heartbroken. Talk returns to the wedding. Abe’s excited.

Lucas and Kate knock on Eric’s door. Eric pauses before opening to tell Allie they’re there.

On the next Days of our Lives: Xander goes looking for advice.

Lucas Confronts Kate About Allie Who...

After Lying About Where She Got the...