Monday June 8, 2020: On Days of our Lives today, Will and Sonny realize Gabi's missing, Jake contacts his mystery person, and Gwen reveals to Claire she's not 'crazy'. 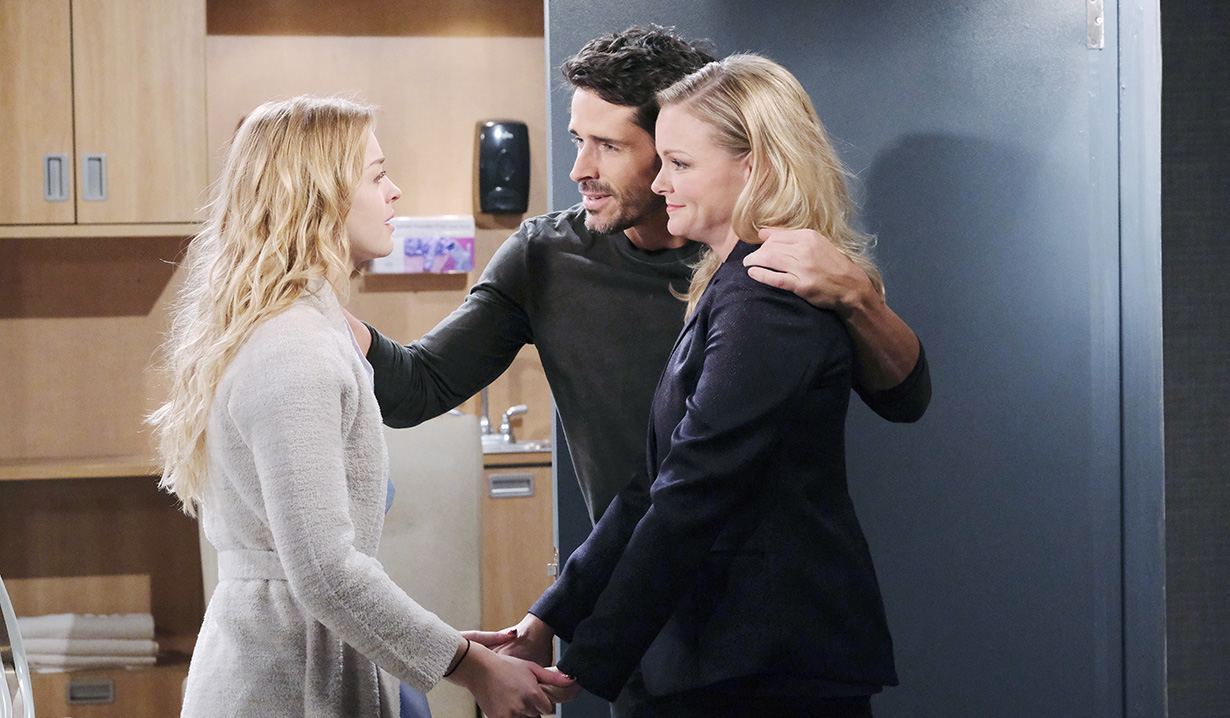 From home, Will and Sonny begin to worry about Gabi since the butler, Harold said Gabi never came home last night.

At the garage, Jake leaves a message for someone. He knows they don’t want to hear from him but says he’s “desperate and needs his stuff back now. Somebody’s life depends on it.”

In his room at Salem Inn, Ben has called around searching for Gwen. Ciara panics. They’ve 24 hours or Gabi is dead. Ben calms her down but she still itches to call Rafe. Ben reminds her – no cops. He tells her to go to work. He’ll find out if Jake has learned anything.

Claire spins on a stool, bored at Bayview. She sees Gwen who asks, “I thought Granny the Wonder Shrink was getting you out?” Claire assures is. Gwen brings up Ciara and Ben’s wedding and Claire shushes her. Her grandma doesn’t know she has that Save the Date card. Claire talks about her past with Ciara and how their relationship has been competitive. The more she talks, the more hyper she gets. Claire doesn’t want anyone thinking that she’s not better. Gwen says she’s acting intense. Claire threatens she’d better not say anything about that card. Gwen confesses she shouldn’t even be in there. Claire jokes – everyone says that in Bayview. Gwen faked a breakdown to get herself committed. “Now that, is crazy,” Claire says. Gwen admits she’s hiding from her ex-boyfriend who is scum. They fought a lot and one night he stormed out and said he didn’t know when he was returning so she left. He kept calling and wants his stuff back. Claire’s surprised and promises to keep her secret. 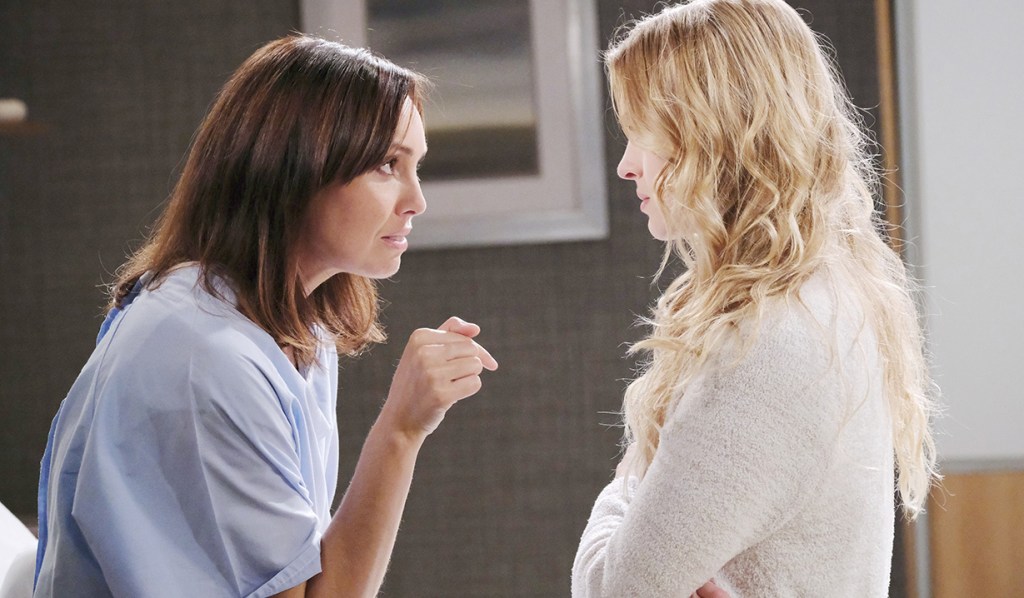 At the townhouse, Marlena tells John she was up late going over Claire’s files last night. Belle lets herself in, arriving from Hong Kong. There are smiles and hugs all around. She says Shawn went to see his mom and admits Shawn has concerns for Ciara if Claire gets out. He wants Ciara to weigh in on Claire’s release before any decisions are made. Marlena says Claire has made tremendous strides. They’ve both seen growth. Belle feels sad. They video chat with her but it’s not the same as being there in person. She feels guilty. Marlena and John comfort her and they discuss how Jordan Ridgeway fooled her doctors into thinking she was well but that Ben Weston’s a success story. Belle cries that she doesn’t want her kid to be a pariah. Which is she? Marlena says she’s her own person. 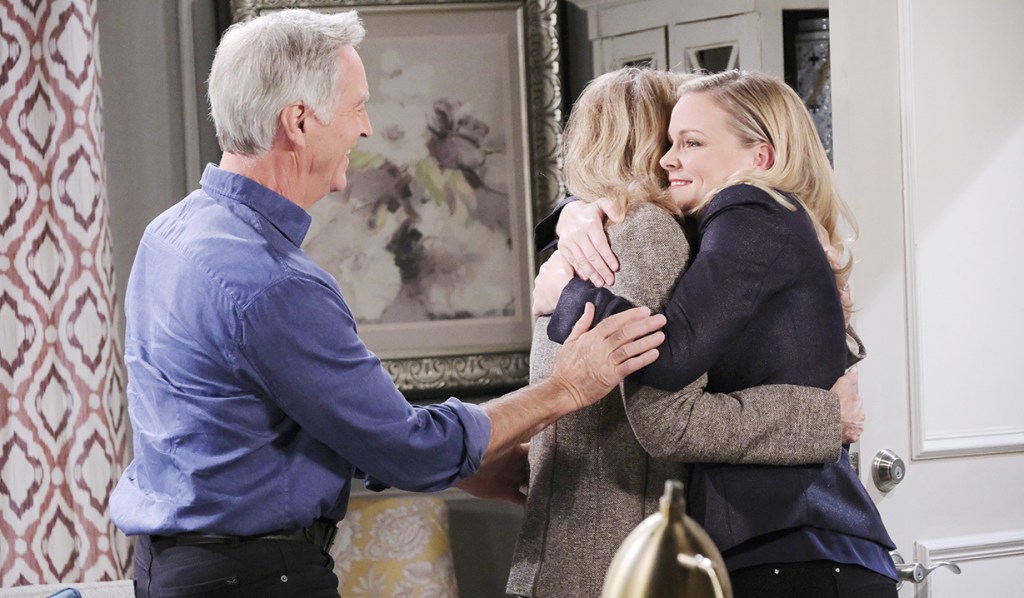 In the square, Shawn greets his mom. Hope has a big hug for him. He brings up Claire’s possible release. Hope didn’t know but finds it surprising yet wonderful. Shawn thinks it’s complicated. He wonders if she worries about what it means for Ciara. Hope saw Claire last week and she didn’t mention a release. She loves her granddaughter and wants to see her come home but asks if Shawn is sure she’s ready and if Ciara will be safe. Shawn assures his mom that they won’t release her if they think she’s a danger to anyone. Shawn just wants to make sure Ciara’s prepared. Ciara and Ben appear and they hug hello. Ciara asks why Shawn’s there and they change the subject. Shawn is paged and needs to go. He’s happy about their wedding plans and goes. Ciara prods and Hope admits Claire may be released from Bayview. She reveals Marlena’s consulting on the case. She hugs Ciara who cries, a little freaked out. She apologizes to Ben, knowing people can recover from mental illnesses. Ben worries since Jordan was able to trick her doctors. Ben hopes they’re not rushing this. Ciara still loves Claire and misses her – she only wants what’s best for her. Hope admires her daughter’s kind heart. They discuss Ciara’s job and how things are tense since Brady’s back as CEO. Ben runs to work and Hope can tell she’s keeping something from her. 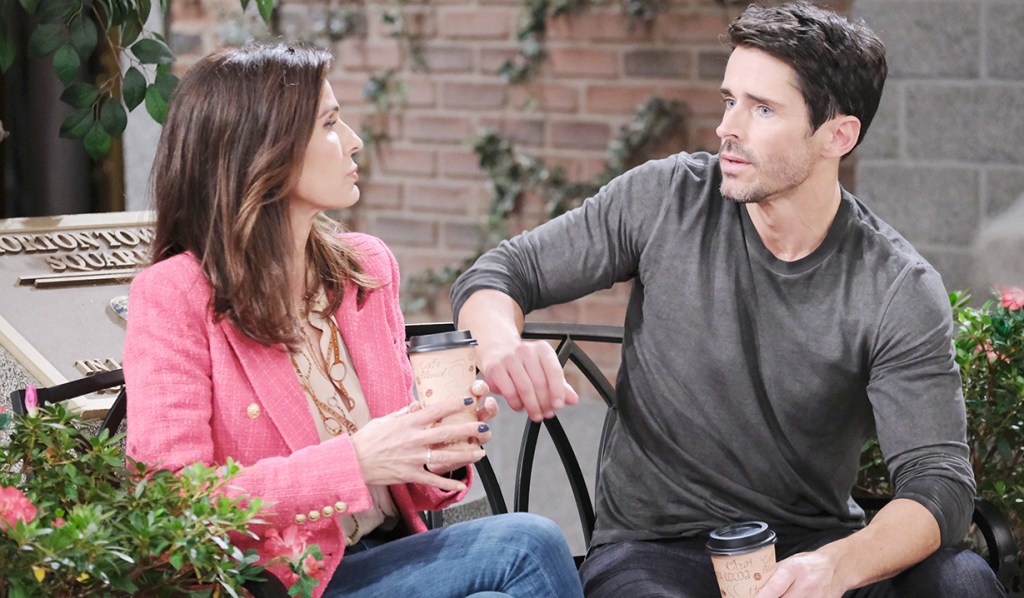 Will and Sonny arrive at the garage. They get a load of Stefan. “Wow, they weren’t kidding,” Sonny muses, noticing the resemblance to Stefan. They ask where Gabi Hernandez is and Jake lies and says he has no idea. They discuss how Gabi thinks he’s Stefan and Jake knows. He says, “Apparently, this Dr. Rolf guy has turned this place into The Walking Dead.” Will asks why he couldn’t give Gabi peace of mind to do a DNA test. Will starts to blame him and realizes that’s where his toothbrush went. Will realizes Gabi was there. Jake lies some more, saying she must have broke in while he was gone. Will calls him a liar. He should know since he’s a reporter and can see the signs. Jake’s on edge when Sonny suggests they call the cops and report her missing. 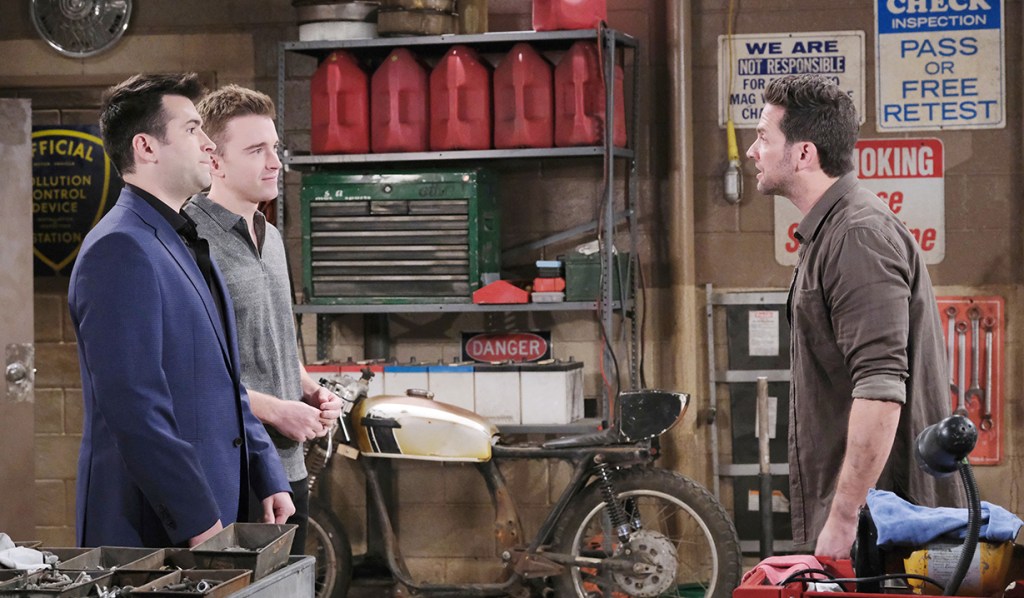 Shawn arrives at the townhouse. He receives hugs and tells them Hope trusts whatever is best for Claire. Marlena admits she’d recommend support and a supervised release on a trial basis. Belle and Shawn are thrilled. Marlena will tell her doctor.

Belle and Shawn arrive at Bayview with great news. “You’re coming home!” Claire cries and laughs. They embrace. Claire swears she’ll make them proud but freaks out when she learns they want her to come home to Hong Kong with them.

Get the soap news, spoilers and interviews in your inbox daily with Soaps.com’s daily newsletter.

Marlena and John Agree Claire Is...

Ben Keeps the Truth About Gabi’s...