Thursday May 28, 2020: On Days of our Lives today, Gabi tells Jake about Rolf setting her up, Hope has advice for Steve, and Ben is almost beaten again. 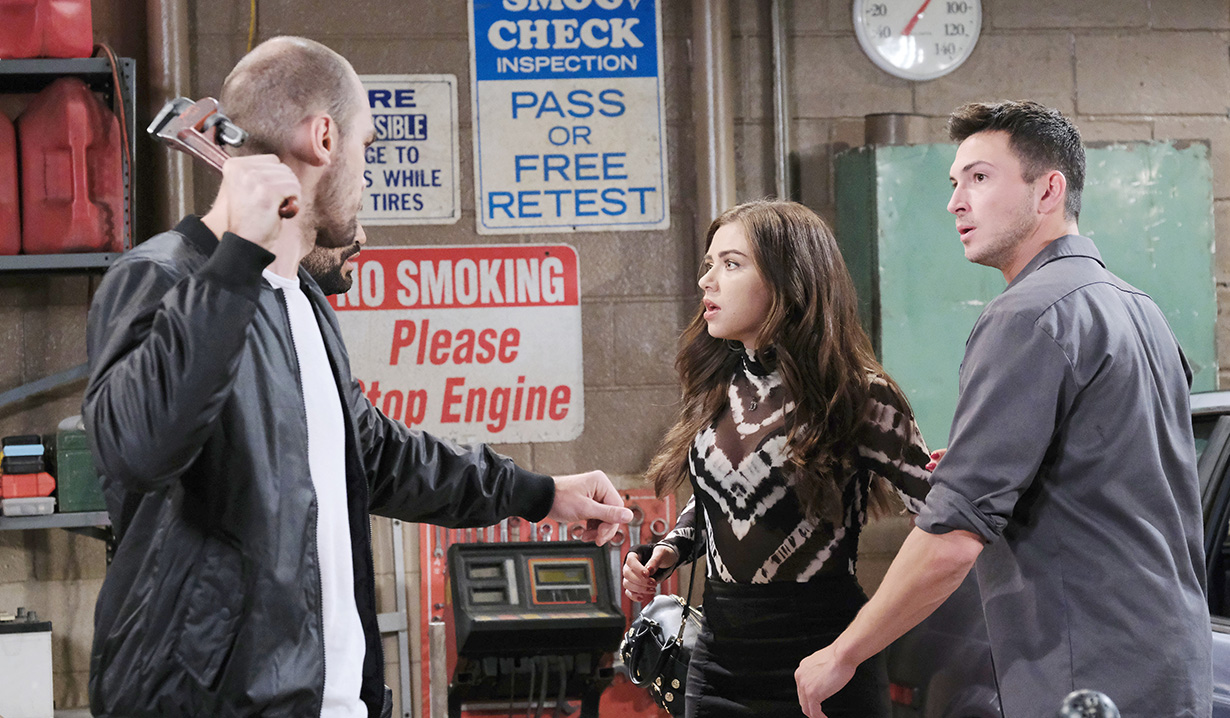 In the park, after the couple is engaged, Lani realizes her period is late. She appears worried. Maybe it’s stress but Eli becomes excited and wonders if she’s pregnant. He asks her to take a test. 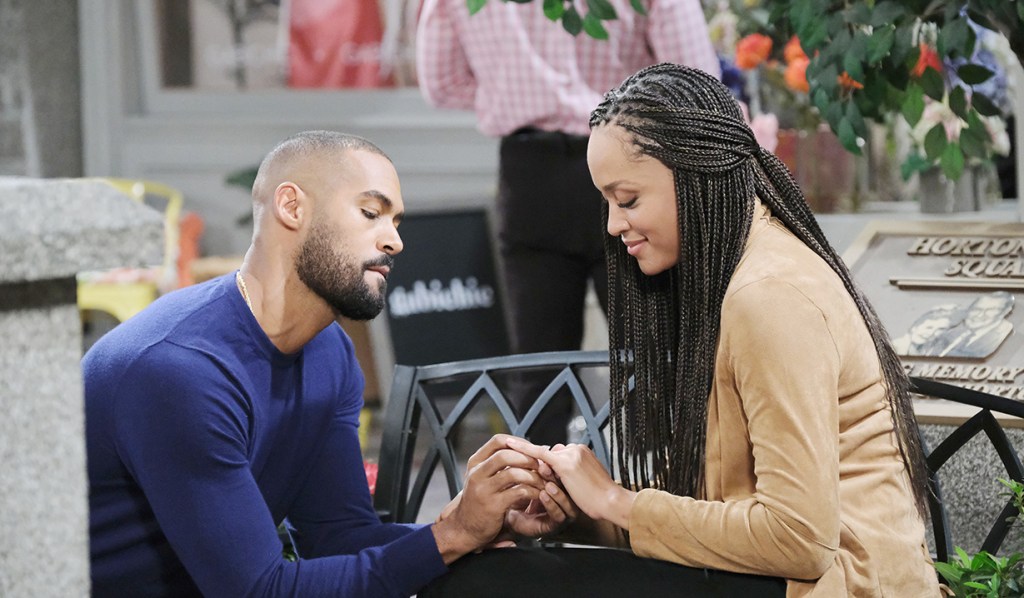 At Brady’s pub, Justin reads the news and bitterly ruminates over Steve backing down from killing Orpheus. Kayla says Steve did this for Justin. He knows he’s not a killer. Justin doesn’t need Steve to save him but Kay’s glad he did. She tries to hold his hand and he pulls away. Justin feels insecure that he doesn’t have the killer instinct, like Steve. Kayla fell for him because of his kindness. They discuss Evan and Orpheus being prosecuted for the accident and Maggie’s impending release.

At Hope’s, Steve reads the news about them being heroes in taking down Orpheus. He throws his tablet down and mutters, “That’s us alright. Real superheroes.” Hope arrives and Steve tells her about the news. Kate arrives. Nobody answered the door so she let herself in. Both tell her to get out but she ignores them. She says they’re heroes and need to be acknowledged. They’re planning something public. Steve and Hope don’t want that and can’t help but remember what they did as Stefano and Gina. Kate yells that they need to move on from that. Everyone else has forgiven them. She stomps out and Hope realizes Kate’s right. It’s time to let go of their guilt. Hope thinks Steve’s staying away from Kayla out of guilt. She asks if he’s able to move on and urges him to go to Kayla. 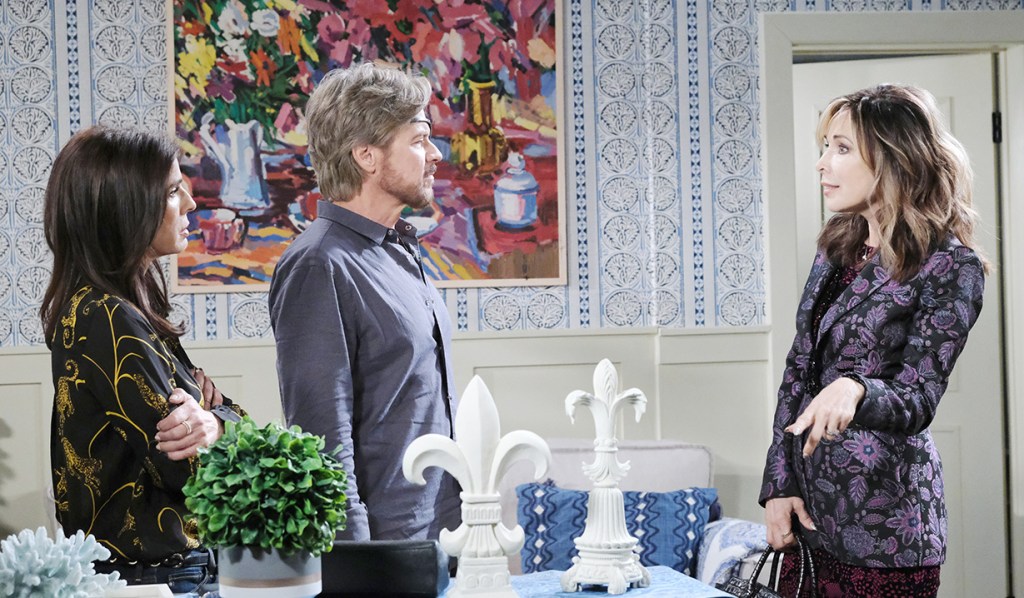 Jake finds Gabi in SPD’s interrogation room. He wants answers. She swears she wasn’t trying to hurt him. She loves him. She thinks Rolf was trying to hurt him and reveals that Rolf says he didn’t bring Stefan back from the dead and insists it doesn’t mean someone else didn’t. Jake rolls his eyes, exasperated. He heard some things about Stefan and her and moves to leave but Gabi says it’s not all accurate. She tells him about winding up in prison for a crime Abigail committed and how an inmate beat her so she couldn’t have kids. Jake’s sorry. She worries she can go to prison and lose her daughter all over again. Jake touches her chin. He’s sorry for her child and her, but he’s not her dead husband, “So leave me alone.” He leaves and runs into Kate. She can’t get over how he looks like Stefan. Jake angrily says he’s tired of hearing it. Kate goes to Gabi and they discuss Jake and Gabi’s arrest.

The two goons (played by Rafael Cabrere & Roberts Jekabsons), return to the garage and demand answers from Ben. He reminds them again he’s not Jake. They know. One picks up a wrench, ready to hit Ben when Ciara intervenes. The other grabs Ciara. Either Ben cooperates or they’ll have some fun with his “little girlfriend.” Ciara yells that they don’t know who they’re dealing with. He’s the Necktie Killer! Ben tells them to do as they’re told and let her go. If they don’t, he’ll find them and end this. They don’t want trouble. They just want what Jake took from them. They’ll be back. Ben holds Ciara and she looks shaken up. She hopes he doesn’t mind her using his past that way. He knows she did what she had to do. She wants him to quit his job but Ben refuses. Jake returns and Ben updates him about the thugs – he needs an explanation. When he doesn’t get one, Ben quits.

Eli and Lani arrive home and discuss the possibility of her being pregnant. She thought they were being careful but Eli teases, “Remember the time at the lake and the really, really long lunch?” Lani’s stressed. He kisses her and sends her away with the test. She returns moments later – she’s pregnant. Eli is thrilled but Lani’s mood is somber. They head to the hospital to get a blood test. 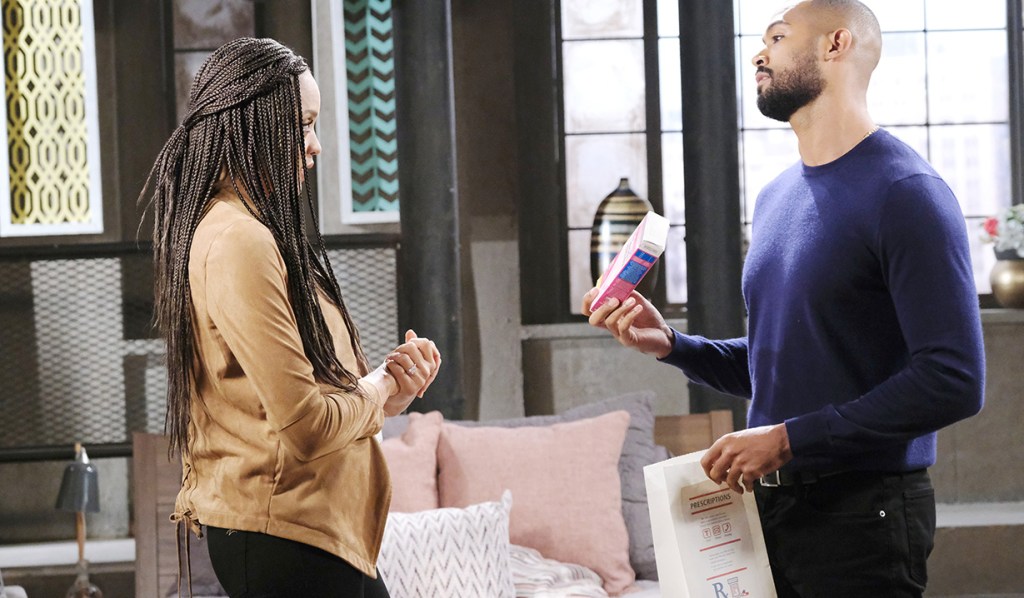 Eli bumps into Justin at the hospital. Eli reveals Lani might be pregnant. He says they’re getting married right away because there was too much time wasted on waiting to spend his life with her. Justin gets an idea and thanks Eli before leaving. In Kayla’s office, Lani lets Kayla know she might be pregnant. Later, Lani flashes to the pain of losing David. She returns to Eli later with official word that she’s pregnant. She doesn’t think she can have this baby. Later, Steve shows up at Kayla’s office.

At Adrienne’s grave, Justin talks to her about Orpheus and says he was reminded that life is about seizing the day. He wants to commit to Kayla and asks for her permission to marry Kayla.

Sonny and Justin have a heart-to-heart.

<p>Eli and Lani get engaged. They’re at the square where Eli proposes with the ring he proposed with the first time.</p>

<p>Justin and Kayla at the pub, discussing Justin’s insecurities about Steve having a killer instinct. Kayla reassures him she loves him for his kindness and didn’t want him to kill Orpheus.</p>

<p>Kate intrudes on Steve and Hope’s discussion to tell them the city wants to give them a commendation. She tells them to get over their guilt and accept it. They’re heroes. </p>

<p>Eli whips out a pregnancy test for Lani to take. She looks nervous but he’s excited as can be to have a baby with her.</p>

<p>Justin gets an idea to seize the day. He goes to Adrienne’s grave to get her blessing to move on with Kayla and marry her.</p>

<p> Jake visits Gabi in jail. He can’t believe she’d want to harm him. She says she wasn’t and tells him her theory on Rolf setting her up.</p>

<p>Jake is aggravated that Kate still sees him as Stefan, along with everyone else. He wants nothing to do with Stefan.</p>

<p>Lani goes to Kayla to confirm her pregnancy. She admits she’s worried about having another baby after losing David.</p>

<p> At the hospital, Kayla does a pregnancy test. It confirms Lani’s pregnant but she’s not happy, though Eli is over the moon.</p>

<p>Jake’s goons return to pound him but Ben’s there and almost takes a beating until Ciara intervenes. Ben winds up quitting.</p>

<p>Justin decides to pop the question with Kayla. This photo was in today’s batch and since it didn’t air today, watch for this tomorrow!</p> 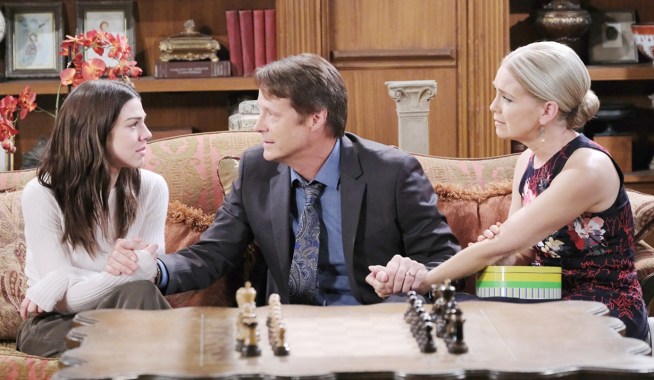 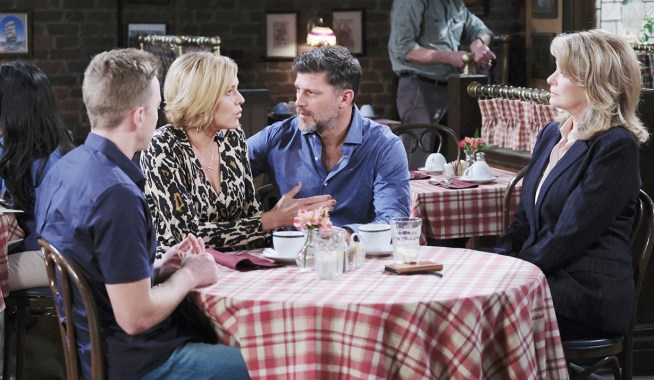