Steve Tasers Orpheus & Knocks Him Out but When Orpheus Arrives at SPD, [Spoiler] Pulls a Gun

Monday May 25, 2020: On Days of our Lives today, Kate doesn't think Eric should marry Nicole, Steve and Marlena rescue John, Orpheus is shot, and Eric and Nicole become engaged. 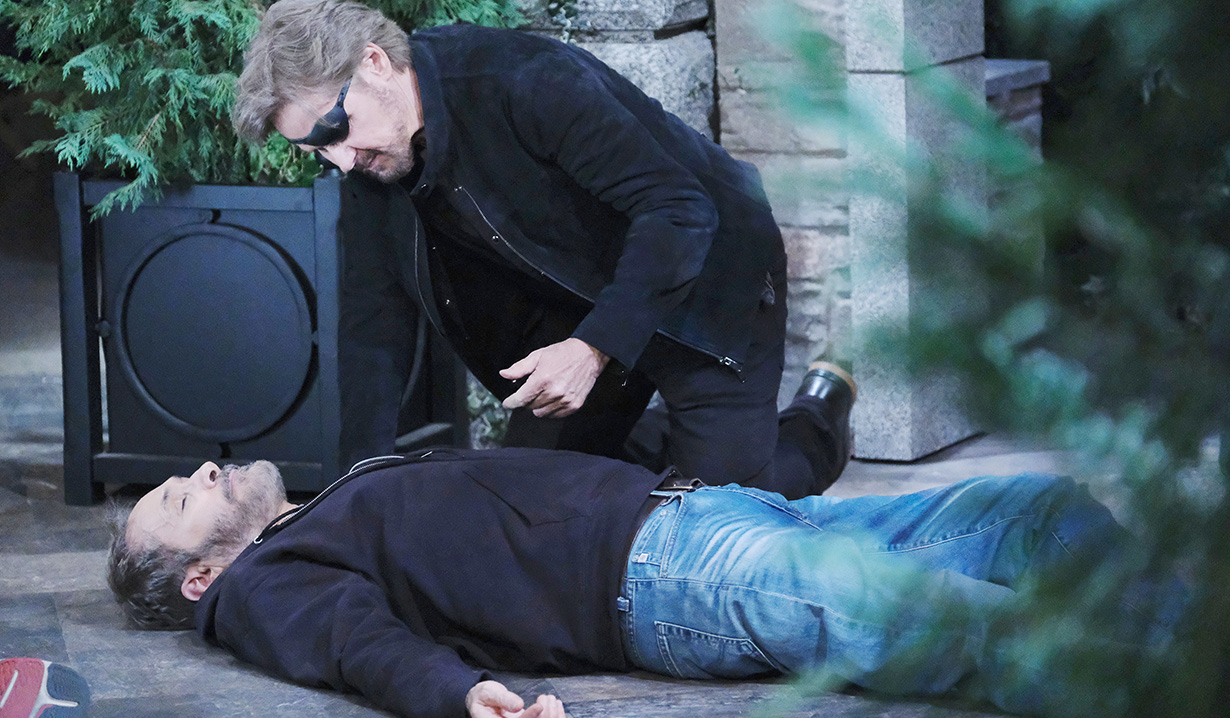 At Rafe’s, Zoey rushes out after Orpheus calls, lying that she’s going to see Evan. Rafe and Hope see right through her.

At Julie’s Place, Abe comes upon Eric looking at a big, gorgeous diamond. Eric says he’s planning on proposing to Nicole. Abe’s happy for him and apologizes for his loss in Mickey. Eric’s grateful – he asks if Abe would officiate at their wedding. Abe says it would be his honor to marry him and Nicole. Kate struts up. “Honey, you are making a huge mistake,” she claims. As the new Director of Communications for the city, she doesn’t think the mayor should be involved. Abe tells her to apologize and Eric tells her to stay out of it. Kate thinks he deserves better than Nicole. Nicole arrives and asks what they’re arguing about.  Kate covers. Nicole learns Kate’s working for Abe and calls that a big mistake. She reminds Abe of all of the blackmailing, double-dealing, forgery Kate has done in the past. Abe decides to take Kate to their table. Nicole apologizes to Eric as Abe asks Kate to stop offering her opinion about other people’s lives. Kate holds a martini. “Well, I mean I can try,” she says. But she was horrified. Abe says suggesting Eric is a fool for caring for Nicole antagonized him. It’s none of her business. Kate agrees to keep her mouth shut. 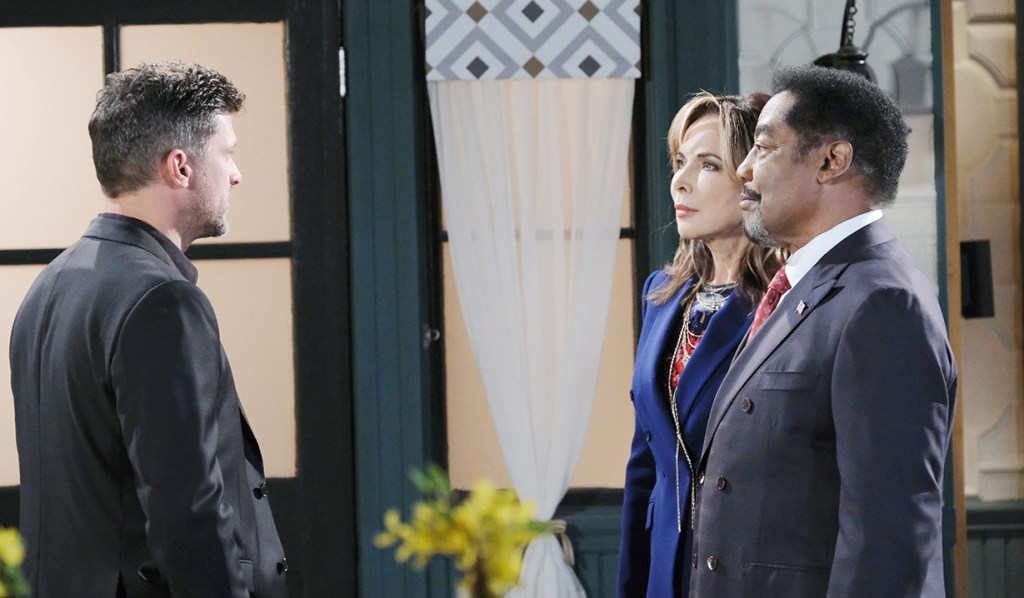 At their own table, Nicole calls the sitter. Holly was just put to bed. She disconnects and Eric gets serious. He reminds her he wanted to have a talk once before, but she went to New York after telling him Mackenzie wasn’t his daughter. He’s now reminded of her strength and calls her and Holly his family. He wants to make it official and helps her up. He gets on one knee and asks for her hand in marriage. Nicole cries and says yes. When she was trapped in the warehouse she never dreamed…He did. They defied all odds, Nicole says, emotional. They kiss, and he recalls the first time he saw her at Java Cafe 20 years ago. Kate and Abe walk over and Abe congratulates them. Kate says ‘ditto’. 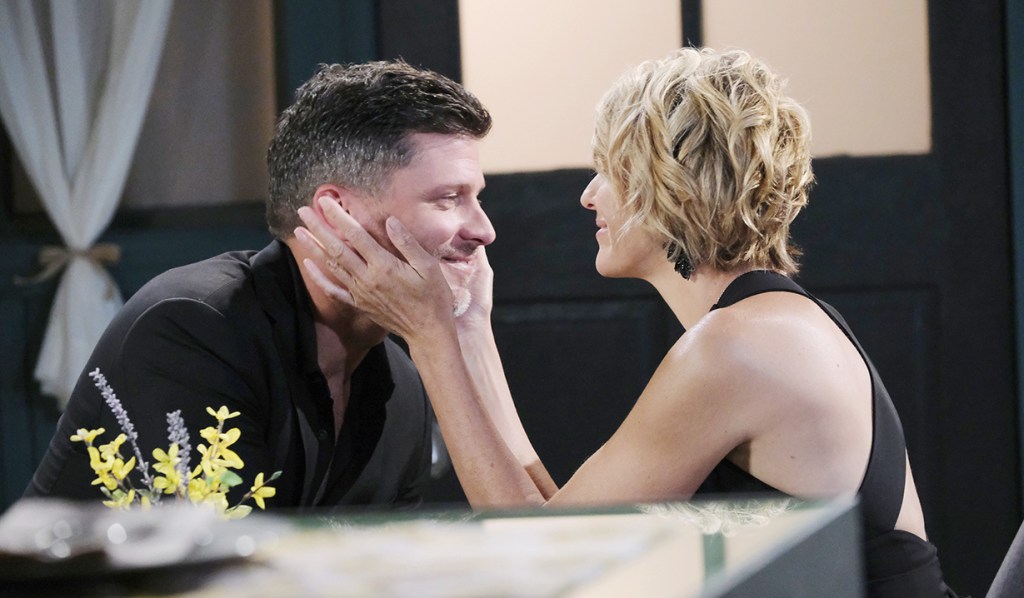 At the hospital, Steve can’t risk Justin going to the park to meet Orpheus. He and Marlena leave alone. Justin worries and hopes Steve knows what he’s doing. Kayla has faith in him. Justin couldn’t take it if Orpheus walked. Kayla flashes back to a fire she was in with Steve and recalls Orpheus shooting at them.

Back at the warehouse, a bloodied John knows Orpheus well enough to know he has something up his sleeve. Orpheus won’t tell him what it is. He doesn’t want to “spoil the fun.” Orpheus starts complaining about all John has done to him in the past.

Rafe and Hope follow Zoey to the warehouse where she has used a code to let herself in. Rafe and Hope find another way in and Rafe puts his gun away. Zoey shows herself and pulls a gun on them. Rafe asks what happened to her. Was she playing him all along? She swears she wasn’t. “You don’t understand. He has my son.” Hope suggests she let them help her. She adores her nephew but needs to think about her son. Hope rushes her and they struggle with the gun and the gun goes off…

Marlena and Steve arrive at the park. Orpheus appears with John, gun stuck into his side. Marlena tries to go to him but Orpheus tells her to back off. They do things his way “or John dies.” Steve takes out Marlena’s phone from his pocket and transfers the funds. He says Orpheus just needs to accept it on his phone. Orpheus does so then shoves John at Marlena. He backs up and Steve presses a button on the phone and zaps him. Orpheus goes down. Steve grabs the man’s gun and promises that someday he’ll make him pay for killing his sister. Shane hooked him up with a taser of sorts, Steve explains to a gawking John. John turns and kisses his wife, grateful to be rescued. 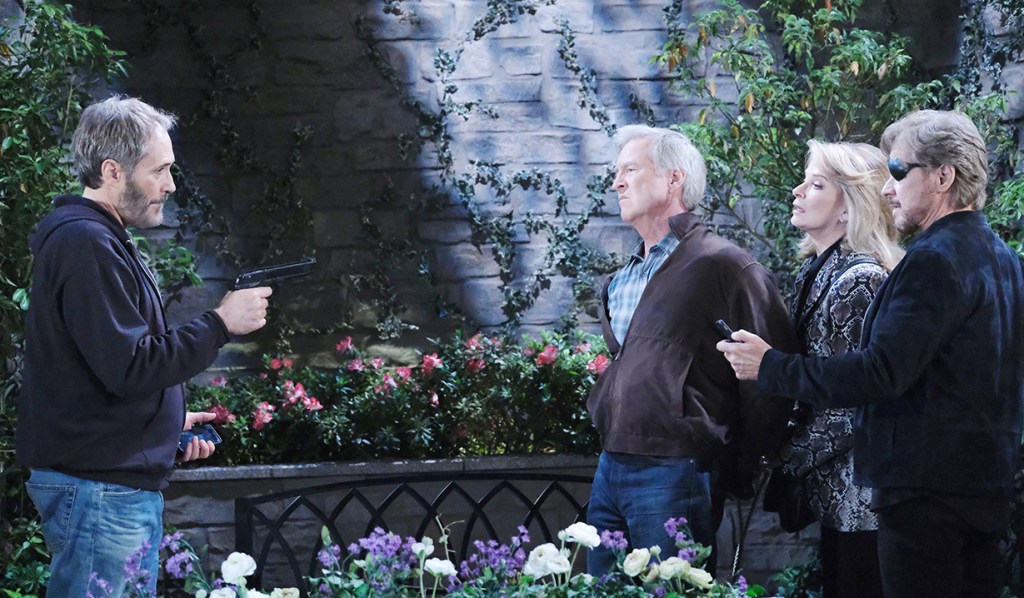 At SPD, Marlena calls Kayla with an update that Orpheus is behind bars. Steve leaves Rafe a message and tells the couple to go home. John says he sent the cops to the warehouse. He thinks Zoey is there and thinks they can trust her since she’s an unwilling accomplice. While they talk, Justin goes to Orpheus in the interrogation room and pulls a gun, to take revenge for his wife’s death.

At home, John and Marlena cuddle but John can’t shake that there’s something else Orpheus is going to do to them. Under the sofa, there’s a bomb with 39 minutes and 50 seconds left on the timer.

<p>Nicole and Eric are finally happy in love. This couple as faced a lot of ups and downs but they’re finally ready for the next step in their lives.</p>

<p>Eric gets down on one knee in the Horton square and proposes to Nicole. This is the second time he proposed. Eric proposed November 22, 2019 but Nicole cried when he proposed and while she wanted to, she was keeping the secret that Mackenzie was not his child. She confessed and the two were apart a while.</p>

<p>Nicole’s excited over the beautiful bling she has on her third finger. They made it through their issues and hopefully will make it down the aisle without a hitch.</p>

<p>Just engaged, Eric kisses Nicole. This couple should marry this summer if all goes well.</p>

<p>Orpheus holds a gun on John, Steve and Marlena. They’re in public at the park where Orpheus demanded Marlena meet him. Orpheus wants the 15 million in exchange for John. Steve does the exchange on his cell but there’s a hitch…</p>

<p>Orpheus is zapped with an app on Steve’s phone and goes down. Steve attends to him to be sure he’s alive and to vow that he’ll one day get him for killing his sister.</p>

<p>Finally reunited after a trying few days. Marlena and John share a kiss at the park while Steve tends to Orpehus. </p> 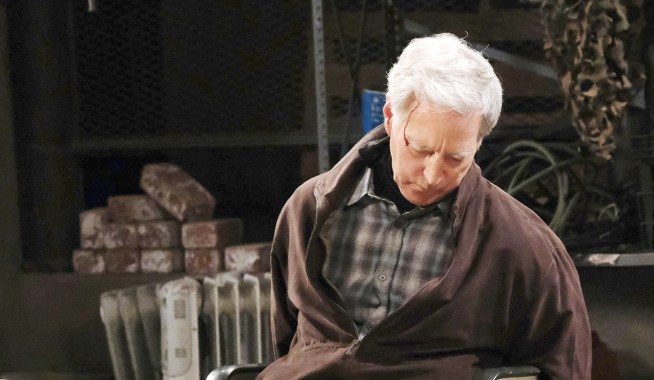 Orpheus Knocks John Out After John Tries to Deceive Him 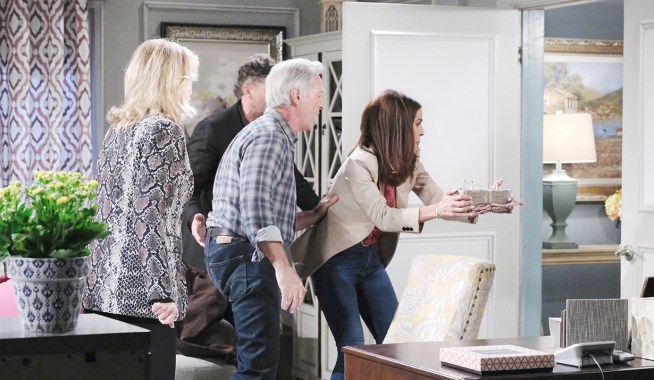