Orpheus Knocks John Out After John Tries to Deceive Him

Friday May 22, 2020: On Days of our Lives today, Abby's ready to go into a facility, Zoey lies to Rafe, and Marlena goes stir crazy waiting on Orpheus. 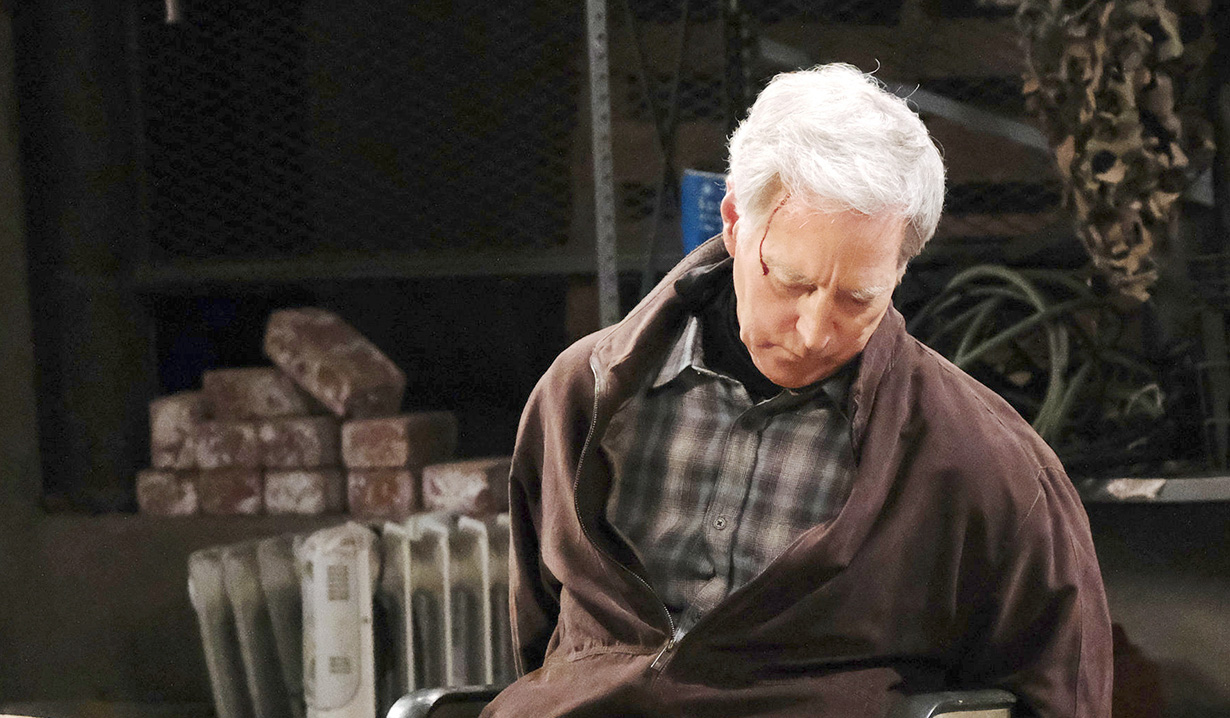 Chad and Abigail snuggle in her bed at the hospital. Abby dreamed they were at the beach with the kids. By the hub, Justin tells Kayla he was surprised to hear Jake refer to Steve as the love of her life and confronts her. Kayla says Steve is the love of her life. She thought he understood that since Adrienne was the love of his. Justin also heard her say nobody could ever take Steve’s place. Justin is hurt. Kayla meant what she said. She doesn’t want him to take Steve’s place. Her love for Steve in the past doesn’t diminish her love for Justin now. Justin feels bad. They profess their love. Jenn and Jack bring Scrabble to Abigail’s room but she’s in no mood to play. Jenn has good news – Gabi’s been arrested and why. Abby’s glad she can’t hurt her again. She can focus on getting better. Chad lets Jack and Jenn know they found a doctor who has had success in treating this kind of thing – in Florida. He wants to go but Abby refuses.

Marlena paces at home and gets angrier by the minute because Orpheus hasn’t called yet. She doubts the millions will keep Orpheus from killing John. Steve thinks Orpheus is making her sweat so she’ll turn up for the exchange alone. Marlena takes a call – a patient needs her. Steve cautions her not to go but she has to. Steve goes with her. 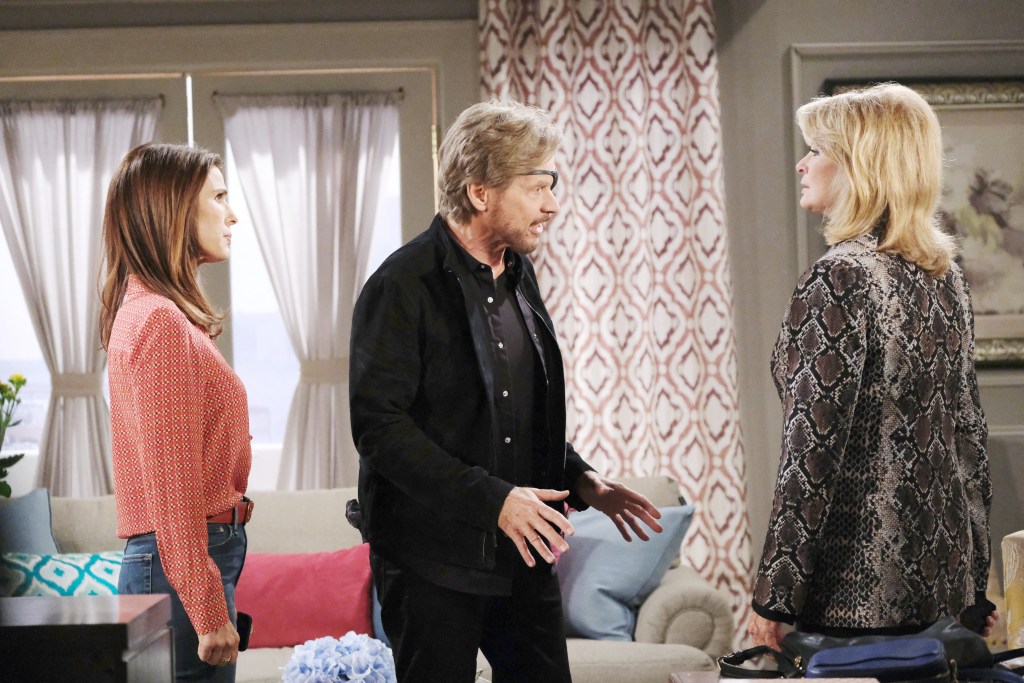 In the warehouse, Orpheus (Milo) feeds John sponge cake. John spits it out and tells Milo, “Bite me.” Orpheus makes a call. After, John says he knows he’s not being released, but he hopes Milo doesn’t put David’s life on the line when he goes on the run. They flash to Orpheus holding a gun against John in the 90s when Orpheus demanded 20 million dollars from John. He was hoping to subject John to the same hurt he endured being left for dead on that island. Losing his wife at John’s hands was bad enough. His kids rejected him and that’s unbearable. John understood that. Orpheus said, “Tell me, John Black. Are you prepared to die?” He goes and David appears. John gets him to untie him. He doesn’t get a chance when Milo returns and sends the kid away and smashes John in the head with the butt of his gun. 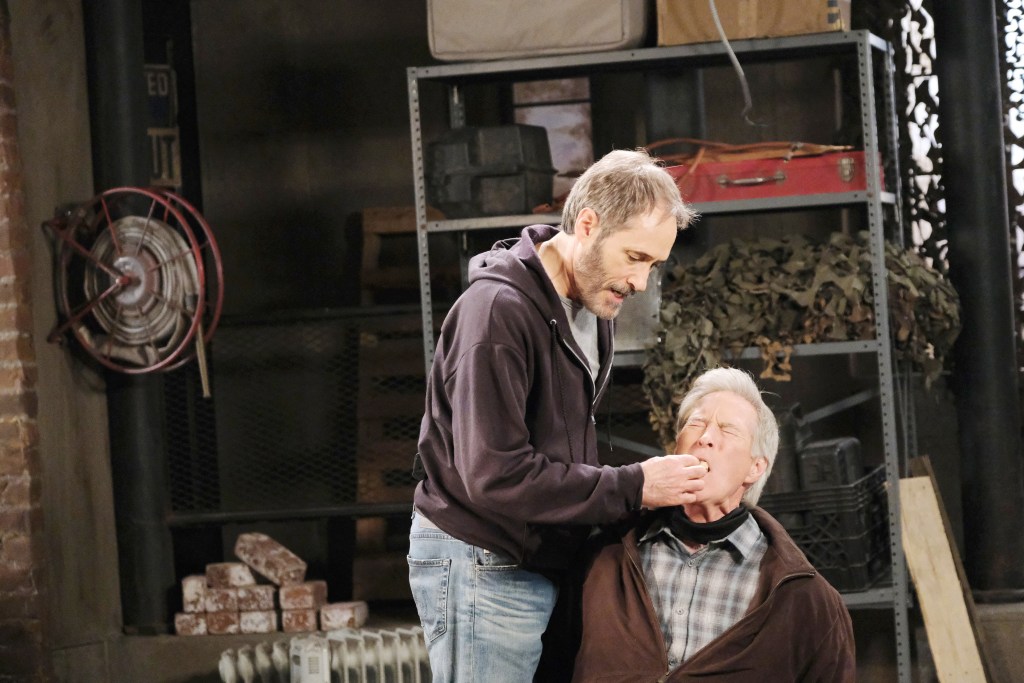 At Rafe’s, Zoey tries to find anyone on her contact list that knows her father. Evan calls from prison to tell his sister he confessed to his part in killing Adrienne and Sarah’s kid. Zoey tells Rafe. He’s glad. Maybe Evan knows where Orpheus is. Zoey says he won’t see her. She was hoping he wouldn’t confess. Rafe explodes. He killed two people! Zoey says he was forced into it. Zoey has lost her dad, her brother and she can’t lose David. She cries. Rafe says she won’t lose David. He hugs her as Hope appears. She’s surprised Rafe trusts Zoey. He doesn’t. David was in her care when Orpheus took David. Orpheus calls and orders Zoey to keep quiet. He gives her orders and later, she disconnects and lies about who called. She goes. Rafe knows she was lying.

Steve walks into the hospital and sees Kayla kissing Justin. He watches and approaches. Justin tells him about Orpheus being responsible for Adrienne’s death. Steve’s astounded. Justin tells him the full story. Steve, in turn, reluctantly tells them that Orpheus has captured John. They’re upset but Steve will make sure John’s brought home and Orpheus gets his. Kayla worries about Steve’s safety. Marlena goes to Abigail’s room. Abby’s told she has a place in the Florida facility and says it’s a good idea if Chad goes with her. Marlena leaves. Abby feels she’s a burden. Chad disagrees. He convinces her it’s a good idea. Jenn and Jack will care for the kids. Marlena finds Steve at the hub telling Kayla and Justin that Orpheus isn’t planning on giving John back to them alive. Marlena has a fit but Steve explains he can outmaneuver Orpheus. Marlena gets a call. Orpheus sends her to the park off the square – alone. Justin demands to go with Steve.

Back at the warehouse, Orpheus wakes John up for the exchange.

Someone pops the question.