Thursday May 21, 2020: On Days of our Lives today, Sarah and Brady work together to ruin Xander and Victor, Kayla yells at Jake over Stefan's past misdeeds, and Victor fires Xander. 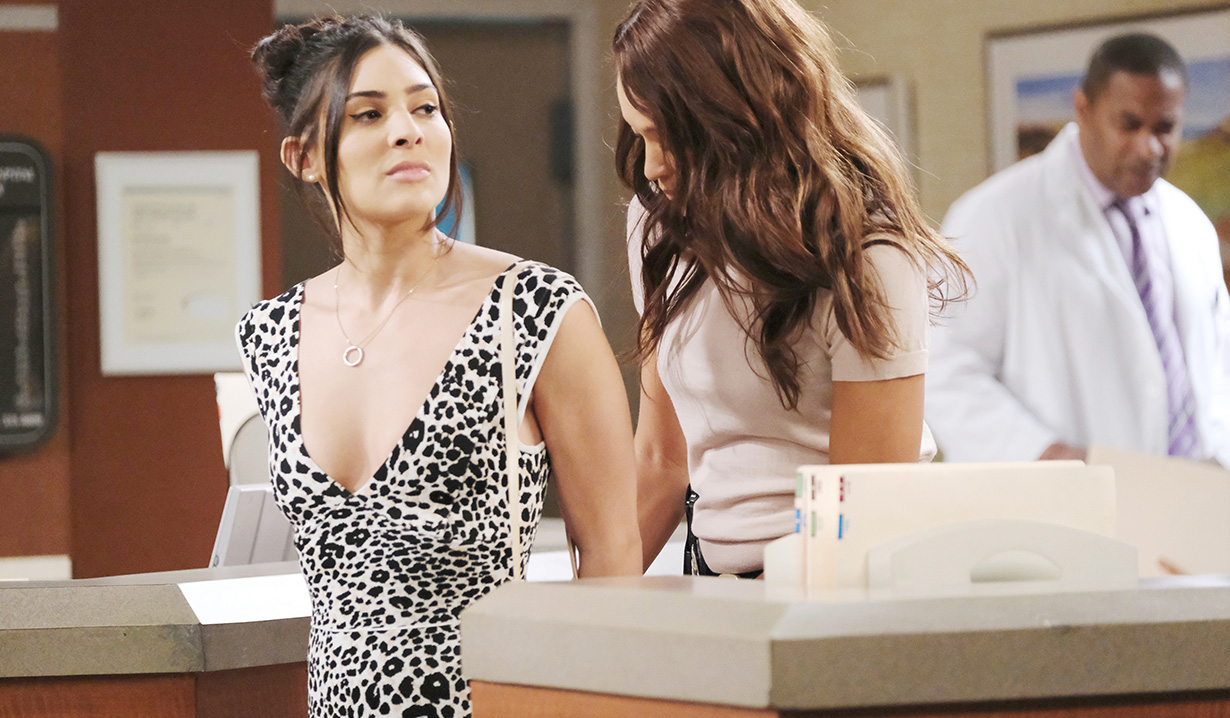 Brady arrives at the hospital to see Victor. Victor doesn’t expect forgiveness but hopes one day he’ll let him make amends, especially now that he has his kid back. Brady doesn’t have Rachel back and shares that he let Kristen disappear with her. “And it is your fault,” he says. Victor explodes that Brady let this happen. Brady tells him to fire Xander today and that’ll go a long way toward making it up to him. He wonders what everyone will think when they learn he hired someone who doesn’t have an MBA to run the place. Victor refuses Brady. He can’t and won’t. He owes Xander. Brady yells that he owes him! Vic owes Xander for saving Maggie. Victor details Maggie’s suicide attempt and Xander saving her life. Brady is beside himself. But this doesn’t wipe out what he and Xander did to him, Kristen and Sarah. “Fire him!” Brady shouts, or he’ll never see him again. By the hub, Gabi goes into shock when Kayla tells everyone that the drug in the syringe she almost used on Stefan is the same drug that caused Abigail’s hallucinations. Eli asks if she cares to explain. Jake calls Gabi crazy as Lani cuffs her. Later, Jake asks Kayla for more information on the drug in the syringe. Kayla’s cold toward him. He questions her and she tells him he looks “just like the bag of garbage that ruined my life.”

In Sarah’s room, Xander asks if Sarah had sex with his cousin to punish him. Sarah says no and yells to get out. Xander tells her that while she was doing that, he was saving her mother’s life from suicide. Sarah is shocked. Xander goes on to explain how Maggie didn’t cause the accident. He explains Orpheus and Evan chloroforming her and wanting to kidnap her for ransom but that his plan fell apart when they got into the accident. He decided then to set her up. Sarah needs to see her mom. Xander first asks her to promise she won’t have sex with Brady again. Sarah blows up. Xandy says Brady’s not good for her. Sarah tells him then to kidnap him and lock him in a cage. Or stay out of her life. 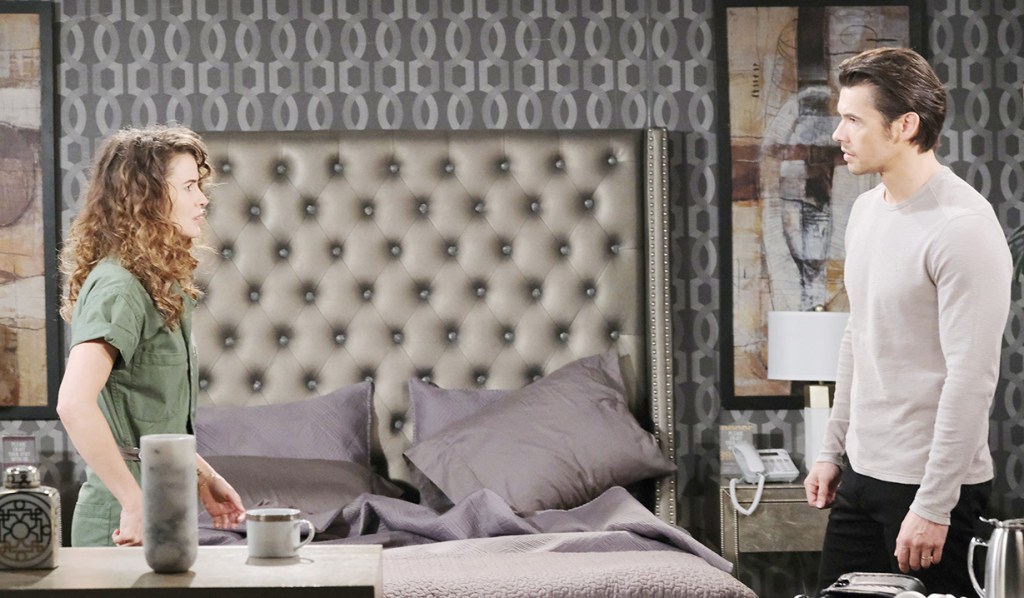 Justin visits Maggie at Statesville infirmary. He heard what happened and knows she’s not responsible for the accident that killed Adrienne. Maggie cries. Justin’s so sorry for what she went through. They bond over their love for Adrienne and Justin says he knows Maggie has been going through hell. He knows she sentenced herself to death for something she didn’t do. Justin couldn’t get out of bed this morning, thinking about the pain and lies and everything they’ve lived with. He wondered, “What does it even mean?” He swears he heard Adrienne telling him it means to go get Maggie out of there. That’s his plan. Maggie cries. Justin says that Sonny’s trying to get Evan to come clean so they can get her out of prison. Later, Sarah arrives and hugs her mother. She forgave her – she wishes she hadn’t tried suicide. Maggie says everything is fine now. Brady appears, tears in his eyes. He heard about her attempt at suicide. Doesn’t she know how much he needs her  – how much they all do? Maggie says she can now face them all again. She’d love to be a part of Rachel’s life and asks if Kristen will be okay with that. Brady tells her Kristen took the kid and left. Later, Brady and Sarah have left the room and talk about working together to destroy Victor and Xander. 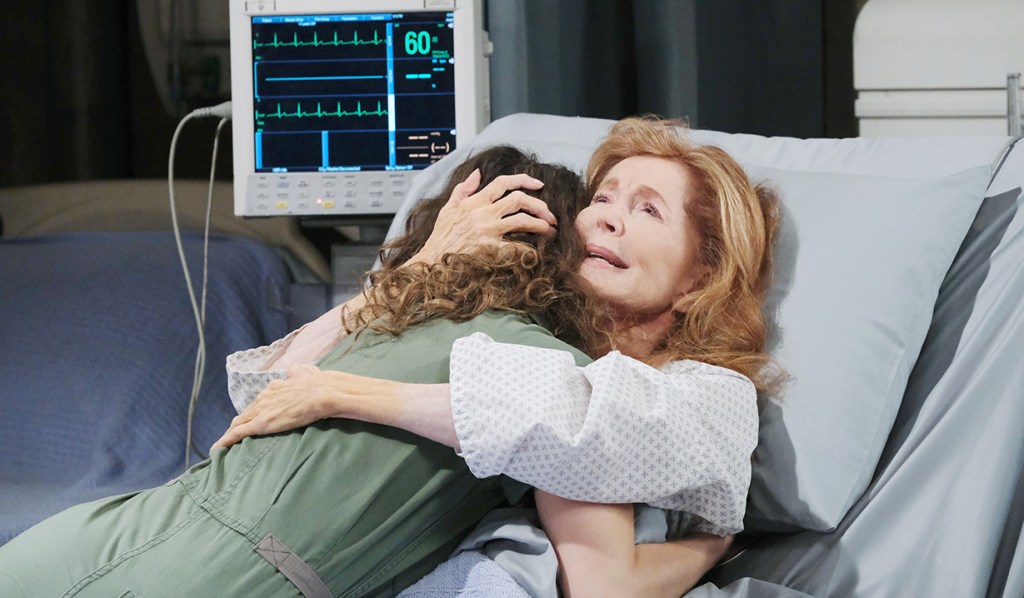 More: Disappointed in the story for Ciara

Sonny confronts Evan in the pokey. He wanted to see the man who killed his mother. Evan muses that he wasn’t driving during the accident but Sonny gripes that he’s still responsible. Evan was thinking about David when he kept the secret. Sonny is disgusted that they became close and that Evan tricked him. “God, I hate you,” Sonny snipes. Evan whispers, “Not as much as I hate myself.” Sonny encourages him to come clean about what he did to Maggie – on paper. He slides Evan a pen and paper. If he doesn’t do this, he and his family will make it their life’s work to ensure David and the parole board knows what a piece of garbage he is. Evan realizes he needs to do the right thing and starts writing.

Gabi is brought to SPD where they’re holding Rolf in the interrogation room. Gabi is glad initially, that Rolf can collaborate her story that the serum was in the syringe, not a hallucinogen. Rolf can’t do that, causing Gabi to freak out. The cops leave them alone together and Gabi snorts that he set her up. He admits it. He doesn’t like her! He laughs that she’s gullible. Gabi asks why he did this. Rolf says she disrespected Stefano DiMera. He led her to the stash that put Abigail back “into the bin.” He says about Jake, “If he is Stefan DiMera then I’m not the one who brought him back. Which isn’t to say it doesn’t mean someone else didn’t.”

Back at the hospital, Xander tells Victor that Sarah knows everything about Maggie’s suicide attempt and her innocence but Xander’s devastated that she still hates him. Victor shares that Brady visited and gave him an ultimatum, either he reinstates him as CEO and fires Xander or Brady’s out of his life. Victor fires Xander. By the hub, Justin overhears Kayla tell Jake that he caused her to lose the love of her life.

More: Jake vs. Stefan – who do you prefer?

Gabi’s in Hot Water When Kayla...

Orpheus Knocks John Out After John...