Tuesday May 19, 2020: On Days of our Lives today, Zoey tries to get Rafe to trust her, Will and Sonny learn Maggie's attempted suicide, and Steve asks Hope if she wants him to run interference with Ben Weston. 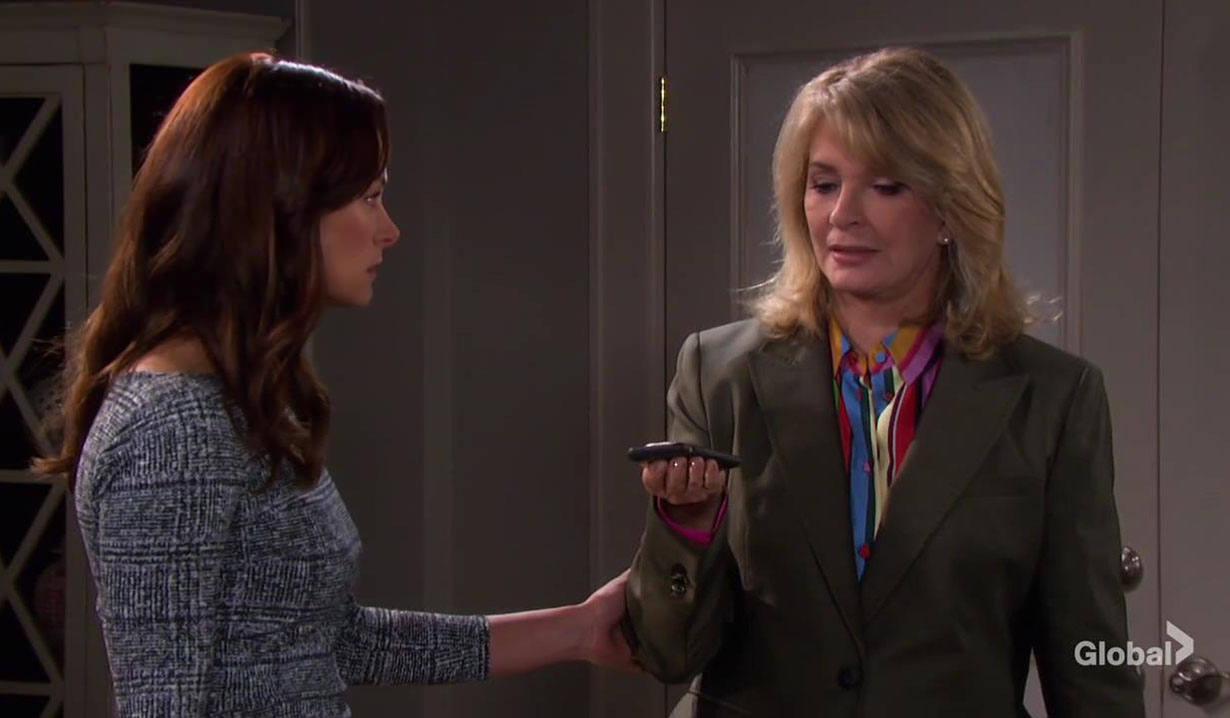 Rafe finds Zoey tied up in a chair in his house. He removes her gag and she gasps that her father took David. Rafe immediately calls it in. He demands answers but Zoey doesn’t know where Orpheus took David. Rafe doesn’t believe her. Zoey tries to convince him she’s on his side. He releases her. Zoey remembers her dad mentioning wanting to take David to meet an old friend. Rafe tells her that he’s holding John Black hostage. Zoey knows he won’t leave Salem until he gets the money. What do they do to find him? 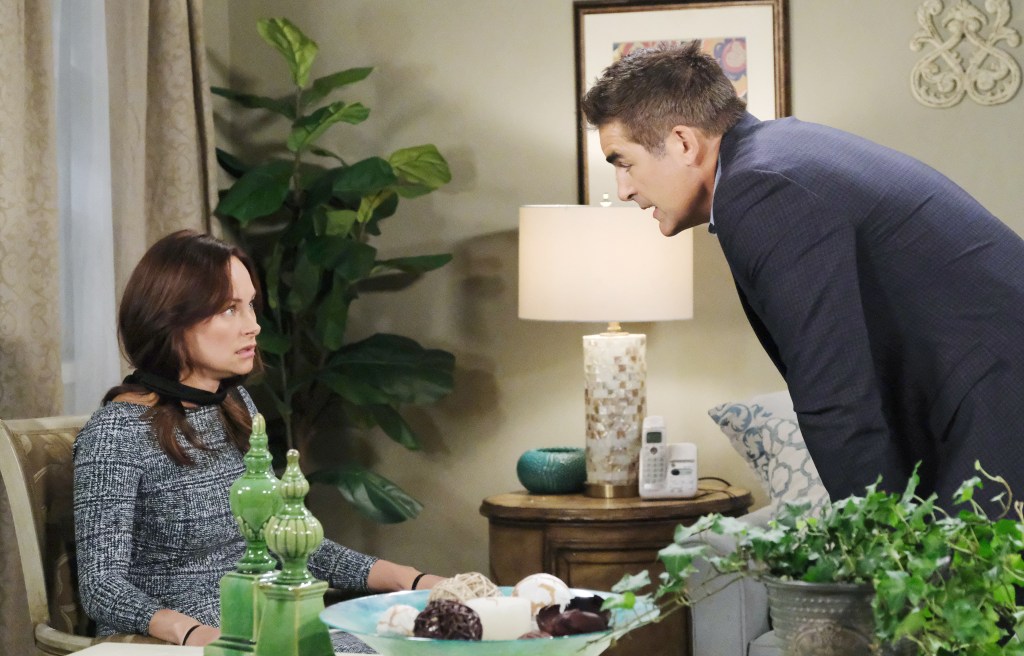 In some warehouse, Orpheus holds David and tells him about embarking on an adventure. David thinks that sounds fun. Orpheus introduces David to his old friend. He brings him to John Black, who is groggy, bound, and gagged in a chair nearby. Orpheus tells the kid that he and his friends like playing games like cops and robbers. He removes John’s gag and John smiles at the tyke and tells him it’s nice to meet him. Orpheus sends his grandson to play and John calls him a lousy son of a…Orpheus stops him. He wants the means to have a new life. Orpheus leaves the room and John asks the kid to find his phone so they can talk to Rafe. Orpheus interrupts and gags John again.

At the pub, Steve learns Ciara’s marrying Ben Weston. It’s not the type of man he’d have wanted for his niece to marry. He takes a call from Marlena who needs his help. She learns he’s with Hope and asks him to bring Hope to her townhouse.

Justin meets Kayla at the hospital. Kayla tells him Victor’s doing “amazingly well” and is reading a letter. In Victor’s room, he finishes the suicide letter Maggie wrote and leaves a message for Xander to see if he got to Maggie in time. Will and Sonny appear and Victor shows them the letter. Will’s shocked. Victor can’t get through to Xander or the Warden’s office. Will thinks that as a reporter, he can talk his way into the prison. He’ll call when he knows anything. Will finds Justin and Kayla and asks Kayla to accompany him to the prison since Victor’s worried Maggie tried to kill herself. They rush off. 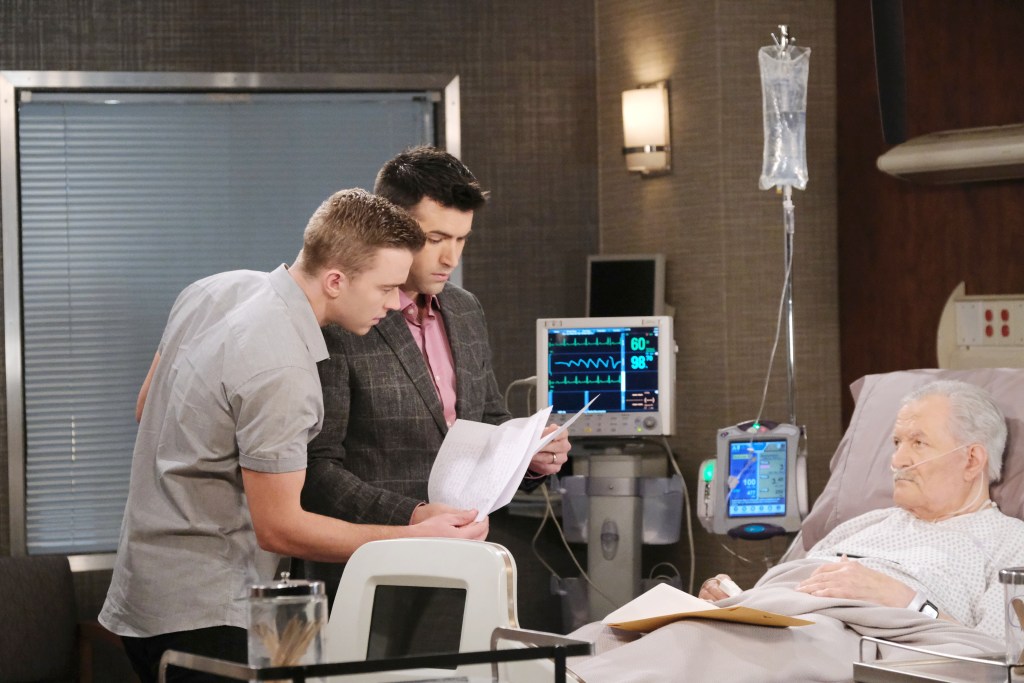 At Statesville, Xander cuts Maggie’s ropes from the top bunk and tries to get her to come around. He starts chest compressions and yells for the guard twice. Maggie coughs as she comes to and cries. Later, she’s been brought to the infirmary where she wakes up with Xander at her side. Xander tells her the doctor said she’d be fine but Maggie disagrees – not after killing her own grandchild. She cries some more. Xander lets her know she didn’t do it.

Hope and Steve arrive at the townhouse where Marlena lets them know John was kidnapped. She explains Orpheus wants 10 million dollars in exchange for John and shares that he showed her a photo of John bound and holding today’s newspaper. Hope says she needs to tell Rafe but Marlena did even though she was told not to. Steve says he’ll call Shane. Marlena asks him to be discrete. She thinks Orpheus has eyes and ears at the ISA. Steve goes to call Shane as Rafe and Zoey arrive. Marlena remembers her as a child. Zoey feels bad that her father forced her to care for him but Marlena knows the kids had no choice. Nearby, Hope quietly apologizes to Rafe for all she has put him through. She knows the timing is off but…Rafe says it wasn’t her fault. He’s glad she’s back to her old self. Orpheus calls. They put him on speaker. Marlena was able to get a hold of the money but needs the bank account to deposit it into. He’ll give it to her but first wants to know who is eavesdropping. Marlena hems and haws. He guesses Steve and Steve says they’re there to make a deal. Steve offers himself up but Orpheus refuses. Hope admits she’s there. Orpheus mocks Steve and Hope, reminding them of what they did to John a few months ago. Zoey tells her dad to “knock it off,” and Rafe makes it known he’s there. Orpheus smirks and tells Rafe he can’t trust Zoey. Considering Marlena broke the rules, she has to face consequences. She has to pay another 5 million. He allows John on the call and John says not to comply with the blackmail. 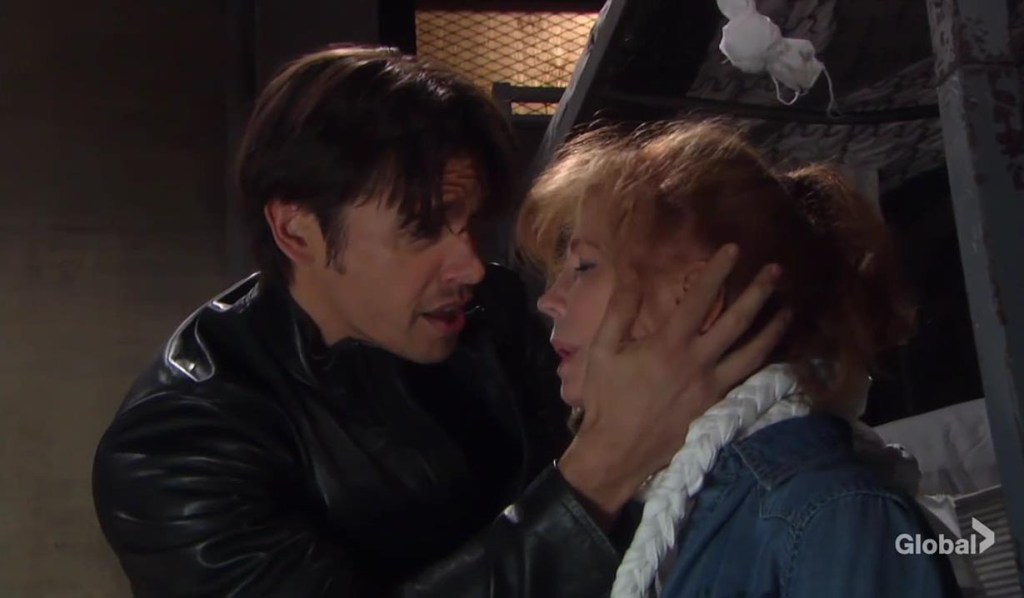 Back at the hospital, Justin tells Victor and Sonny that Maggie tried to kill herself but Xander made it in time. Victor’s devastated.

Back at the prison infirmary, Will and Kayla appear, glad to see Maggie alive. Xander clarifies that she didn’t take a drink. Orpheus and Evan chloroformed her and put her in the car. She never drove that night. Everyone gasps in surprise. Xander tells them the whole story. Maggie tries to wrap her head around the story. She sobs in her hands, grateful. Maggie wonders how she can thank Xander.

Back at the hospital, Vic’s frustrated waiting for Will to call. Sonny sarcastically suggests that Will’s freaked out being back at the prison Victor let him rot in for a year. Justin berates Sonny. They tell him that the three of them hate what Maggie did but they don’t hate Maggie. Kayla arrives and tells them Maggie’s fine – she repeats Xander’s story about Maggie not being guilty. Sonny demands to know who killed his mother.

Maggie Hangs Herself in Her Prison...

Gabi’s in Hot Water When Kayla...