Thursday May 14, 2020: On Days of our Lives today, Evan is arrested, Lani is ready to confess to Rafe, and Abigail continues to hallucinate. 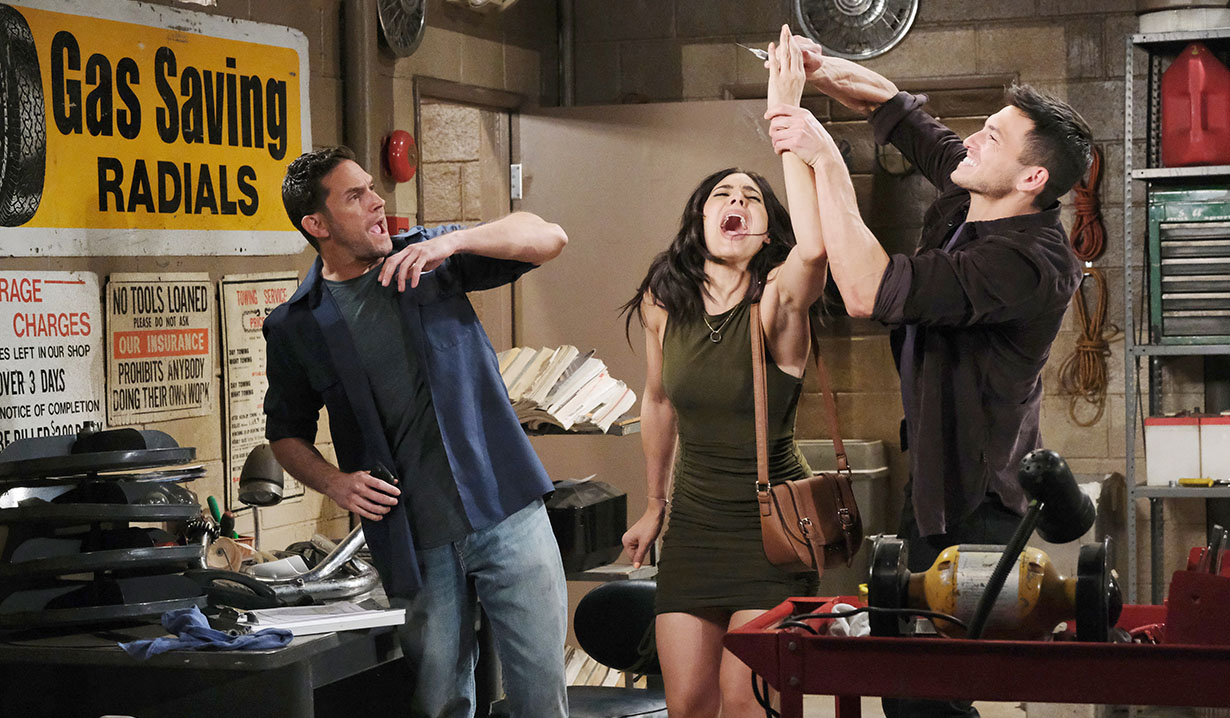 Lani slinks over to Eli at the square. He turns to leave when he sees her and she stops him. She knows he’s upset with what she did. “Aiding and abetting attempted murder?” He snipes. Lani has decided to confess.

Rafe gets word on a call from SPD that the deliberation in Evan’s murder case is over. Lani arrives and Eli shortly after. She explains she hasn’t had a chance yet to confess to Rafe. They head into the interrogation room and rehash Lani helping Kristen escape. Eli hates what she did but doesn’t want her in prison. He wants to keep her secret.

At the court, Evan and Zoey, (played by Alyshia Ochse), nervously await word on the murder case when Orpheus appears. Evan is sent into court while Orpheus threatens Zoey. Rafe appears and gets into a confrontation with Zoey and Orpheus about whether or not Evan killed Jordan. Rafe is confident Evan will be imprisoned as a murderer. Evan appears in cuffs with a cop. Rafe’s going with him to Statesville to make sure everything turns out okay. Evan says goodbye to Zoey who vows to get custody of David. Rafe scoffs at that and tells the officer to take Evan to his new home. They file out and Orpheus blames his daughter for everything and now tells her it’s time to do things his way. “Your way,” she states. “Like the way you did it last year?” Orpheus isn’t pleased she knows his secret. 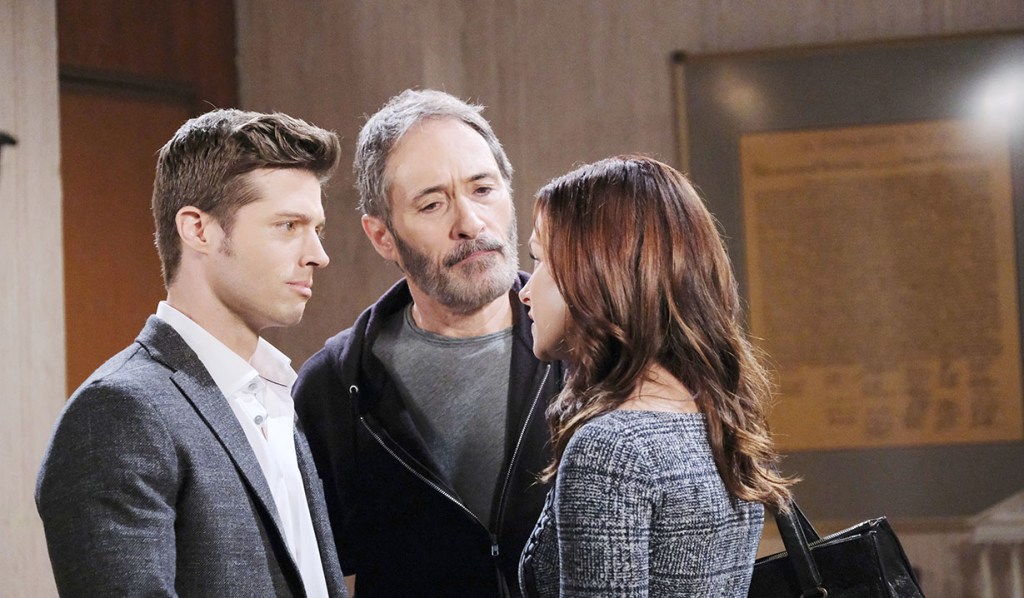 At the hospital, Abigail hallucinates Stefan, Gabi and Ben leering at her. Chad holds her and she comes out of it. Jenn and Jack try to comfort her but she thinks they’re Gabi and Stefan and cries, “I need help.” Marlena wanders over and they explain the situation. Marlena leads them into her room and hears the story of what happened with Kate and how she just now saw Gabi and Stefan when it was really her parents. Chad thinks she sees Gabi as a threat. Abby hallucinates Orpheus again. Marlena asks her to hold on to what is real. Marlena gives her a sedative and goes to Jack and Jenn with an update. Later, Jenn and Jack sit with Abby while she sleeps.

Gabi arrives at the garage and Jake demands to know why she’s there. Gabi flashes to getting the serum ready in a syringe and gives him his antibiotic cream back. He’s sarcastic and tosses it on a pile of hubcaps. When his back is turned, she attempts to plunge the syringe into his arm. Ben intervenes and grabs the syringe. Gabi yells and Jake spins around. He assumes the worst but she says she’s trying to bring him back. She explains to Ben that Dr. Rolf told her that Jake really is Stefan with memories of Jake implanted in her brain. Jake laughs at that as if it’s an “episode of Black Mirror.” Ben wants to call the cops but Jake panics and doesn’t want that. Ben refuses to give Gabi back the syringe. He goes and Gabi tries to convince Jake to take the serum and become himself. Jake understands she had something special with Stefan but it has nothing to do with him. He yells to let it go but she can’t. He gives her the boot. 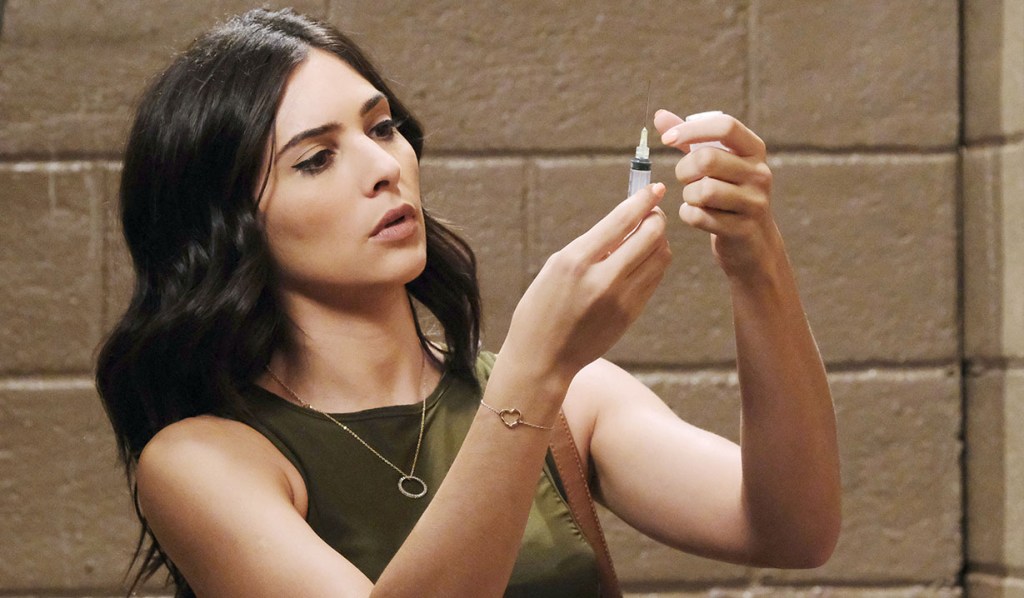 Ben arrives at the hospital and gives Marlena the syringe. He asks her to get the lab to test the contents. He will only tell her that he caught Gabi attempting to inject his boss with it. Chad overhears and questions Ben who explains what went down at the garage. Chad thinks this will mean he can use Ben as an eyewitness to put Gabi away. From her office, Marlena makes a call to someone about Abigail with whom she’s worried about. Orpheus enters and tells her she should be worried about herself.

Rafe walks in on Eli and Lani kissing in the interrogation room at SPD. He laughs it off though they’re embarrassed. Rafe’s thrilled to tell them Evan’s serving 20 years in Statesville. They share in his celebratory mood. When Rafe asks what Lani wanted to discuss with him, she covers. Zoey turns up to discuss something with Rafe… 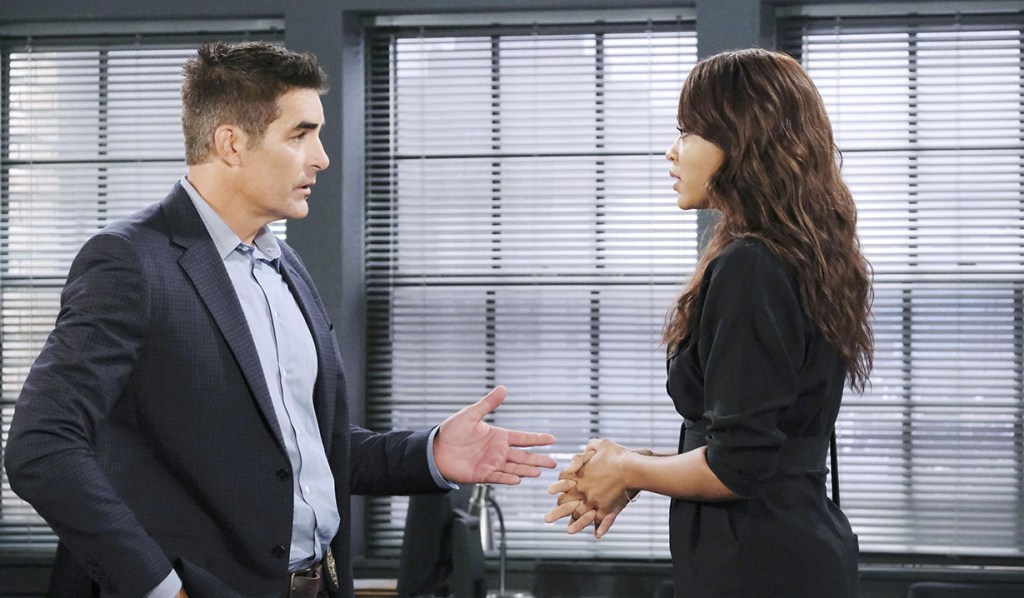 Maggie Says Goodbye to Victor in a...