Dr. Rolf Admits to Gabi That Jake Really Is Stefan 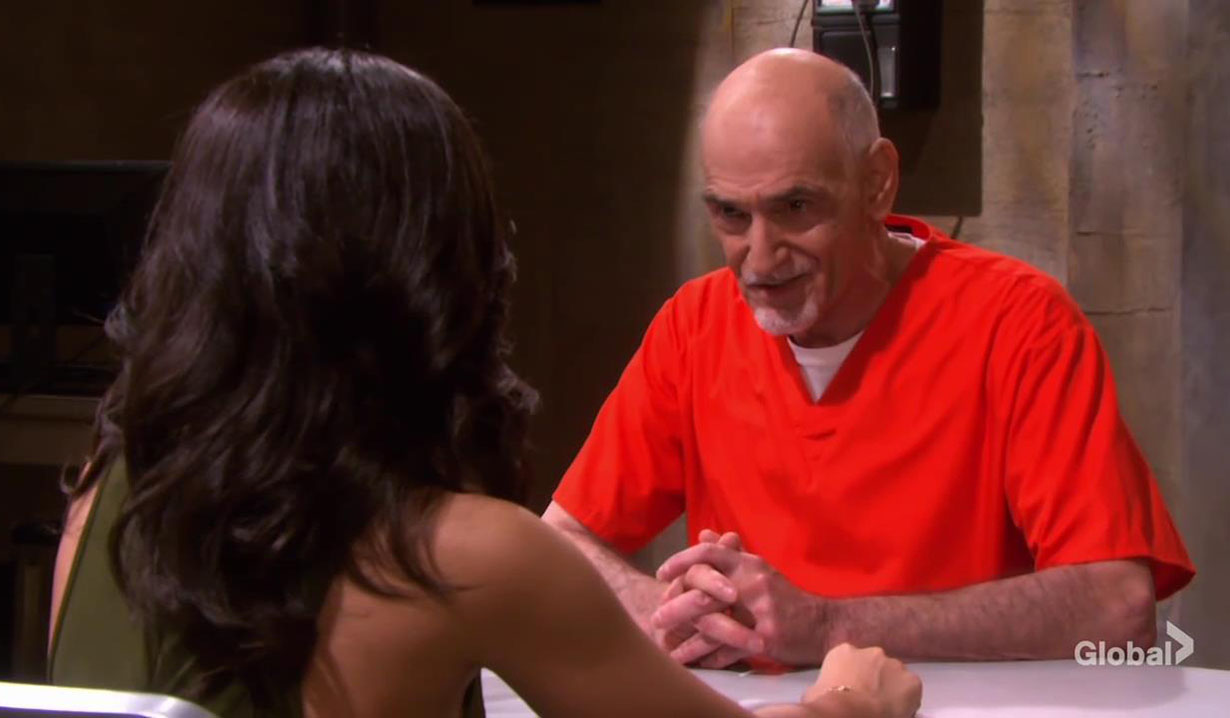 Ciara and Ben kiss in bed at Salem Inn and blissfully discuss their engagement. Ciara wants to tell her mom right away but Ben’s concerned about her having a negative reaction. Ciara doesn’t think that’ll happen. She calls him the best thing that has happened to her.

Gabi visits Dr. Wilhelm Rolf at Statesville. He asks if she’s there to give him a cake with a file in it. She gets to the point. She’s there to demand the truth about her husband. She explains Stefan’s back in Salem, working in a garage and calling himself Jake. He flashes to telling Gabi there was nothing he could do and Rolf denies doing anything. Stefan didn’t have his heart, so he couldn’t bring Stefan back. “Maybe you gave Julie a pig’s heart because that would actually explain a lot,” she theorizes. Rolf laughs. Gabi asks why he’d make him into a “grease monkey who hates me.” Rolf asks if the grease monkey thinks he’s Stefan. Gabi says no but considering all of the people in Salem who have doppelgangers, it doesn’t surprise her if he is. She threatens his life and then asks if he can bring himself back from the dead. Rolf then admits she’s right. He did save Stefan’s life. He reminds her that those he brought back from the dead all had amnesia. He can get Jake’s memory back since he has the serum. Gabi will get him out of there. Stefan will become CEO of DiMera and help them out. She asks him to wish her luck and once she’s gone, Rolf says she’ll need it.

More: What if soaps returned with social distancing?

At the garage, Jake calls someone to tell them to call him back. “You have no idea what’s going on around here. Things are getting more complicated.” He disconnects and flashes to Gabi falling on the cement floor and laughs. He makes another call, demanding his call be returned and angrily smashes the phone down. Ben appears. Jake complains about telemarketers. Ben reveals he and Ciara are engaged and how he’s nervous about her mother’s reaction. Jake asks what he did that has him worried. Ben tells him about the murders and that he has a chemical imbalance. Jake’s fine with it. “At least we don’t wear neckties to work!” He laughs. Talk turns to the wedding.

Chad, Jack, and Jennifer arrive at SPD to ask if he’s made headway on finding Abigail. Chad yells that if anything happens to her, he’ll blame Rafe. Rafe says to keep talking like that and he’ll be the one to end up behind bars. Rafe goes and Jenn reprimands Chad. Chad’s sorry. Almost in tears, he says he’s losing it. 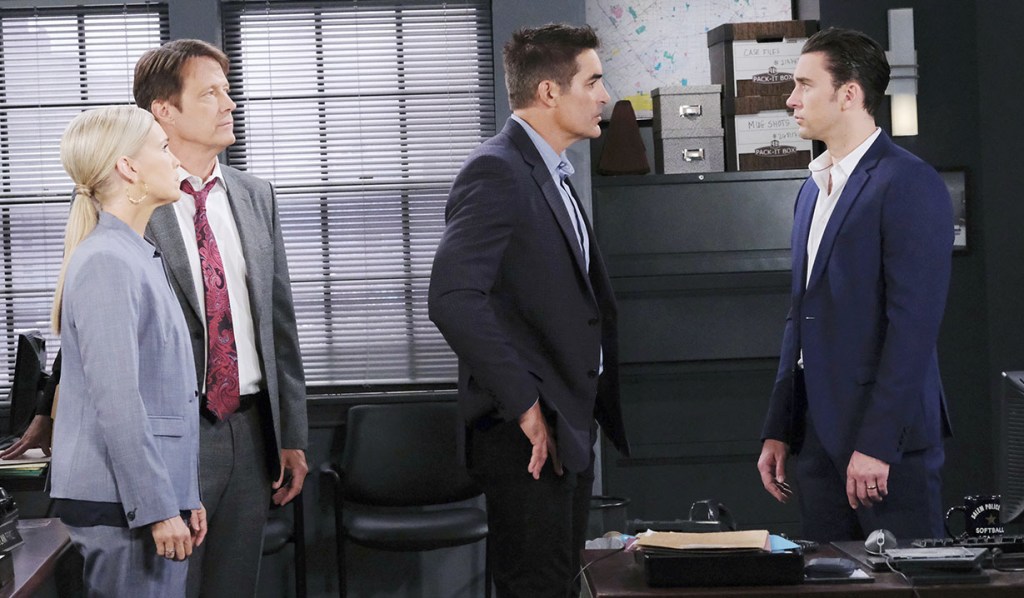 Abigail arrives home through the tunnel door. She stares at Stefano’s portrait and asks for help in getting rid of Gabi. She hides when Kate appears with tea. She sees Gabi drugging the tea and looks frightened. Abe arrives. Kate gives Abe the tea and Abigail rushes him and throws the cup down. “No, don’t drink it! She poisoned it.” Abby calls Kate Gabi and Kate tries to tell Abigail she’s Kate. Abigail attacks her. Abe comes between them as Kate calls Chad to fill him in. 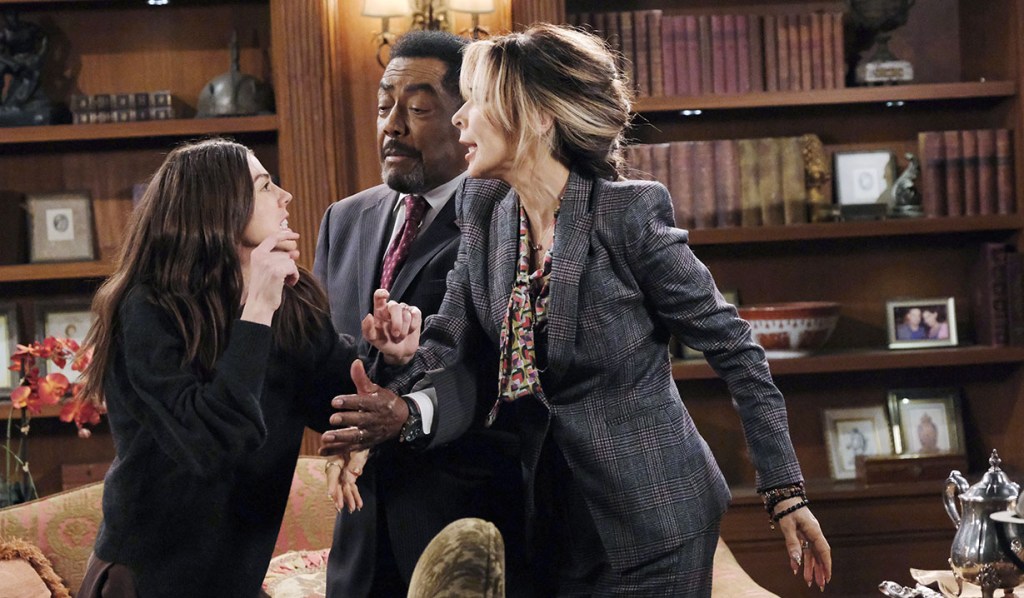 Ciara visits Hope at home. They catch up about her Uncle Steve living there and Ciara shows her mom the washer on her finger. Hope’s confused. Ciara says it’s a placeholder for the ring. She and Ben are engaged. Hope takes a minute to process. “You just hit me with a cannonball.” Ciara tells the engagement story as Hope considers how much planning it must have taken him. She says the washer is from Bo’s bike. “It’s kind of like Daddy’s giving Ben his blessing, and I hope you will too.” Hope takes a breath. She loves her daughter and tears up. She hugs Ciara, knowing that she’s happy, but when they hug, she looks concerned. They discuss planning the wedding. Ciara wishes that her dad could walk her down the aisle. So does Hope. They embrace. Ciara calls Ben – Hope wants to celebrate at lunch. “Did you tell her we’re getting married?” Ben asks. He’s shocked she did. 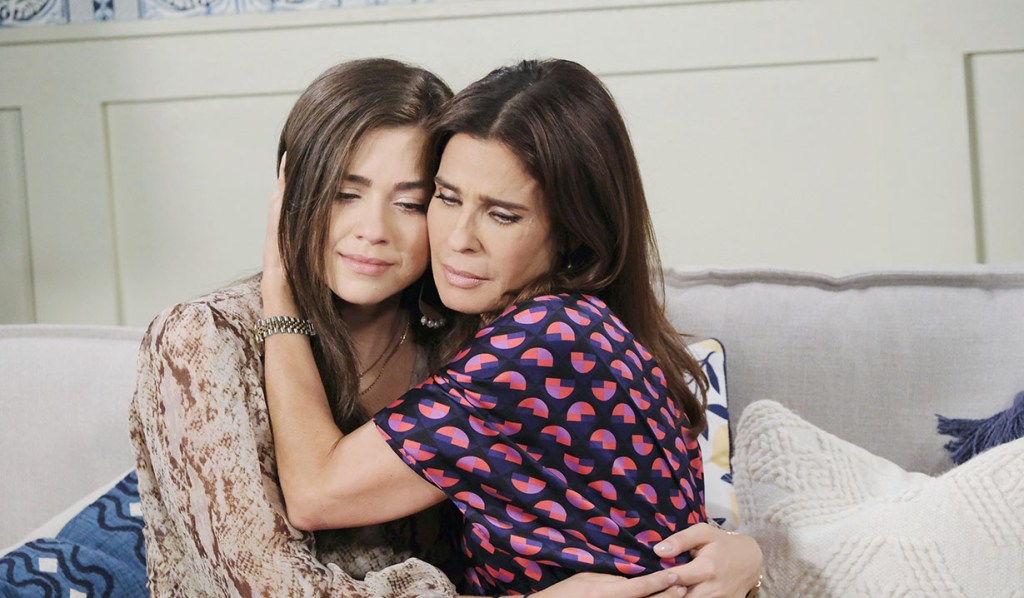 Back at SPD, Jennifer and Jack rush off after Chad.

Back at the mansion, Kate has left the room as Chad arrives and hugs Abby, who is worried Gabi will get away. Chad calls it a hallucination. Abigail looks defeated and says she’s scared. They head back to the hospital. Kate returns. She hopes Abigail is locked up. She asks Abe if she got the job.

Hope, Ben and Ciara dine at Julie’s Place. Hope makes a toast to a happy and healthy long life to them as wife and husband.

Jack and Jenn arrive at the hospital, with support for Abby and Chad. Abby hallucinates Ben, Gabi and Stefan staring at her and goes quiet. 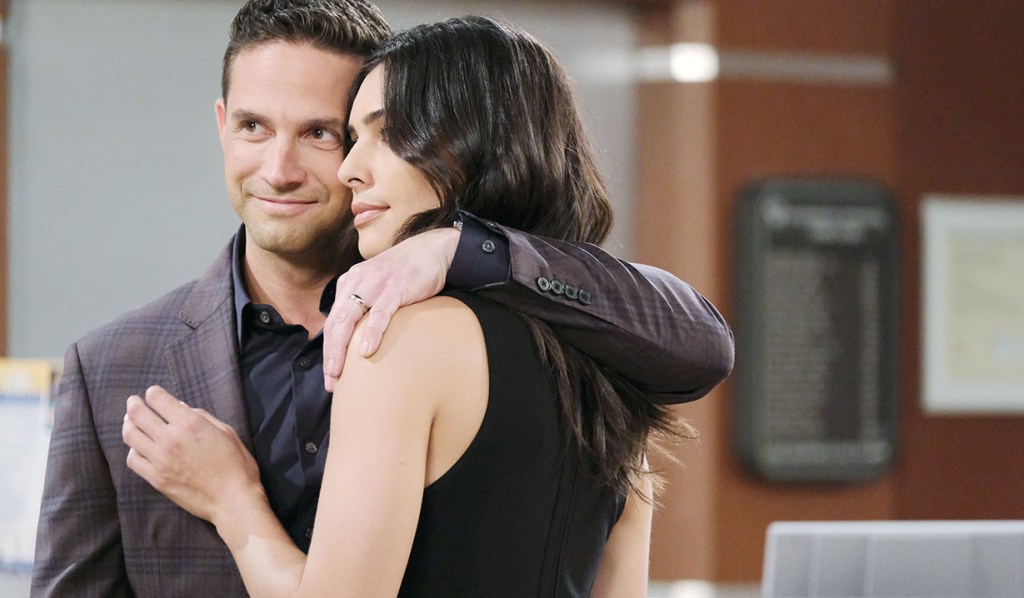 Outside the garage, Gabi prepares a syringe. She heads in to see Jake who isn’t happy to see her.

Evan watches the verdict come in for the custody case.

Kristen and Sarah Face Off and...