Tuesday May 12, 2020: On Days of our Lives today, Kristen wants her baby back, Justin and Kayla run into Hope and Steve, and Ciara and Ben celebrate. 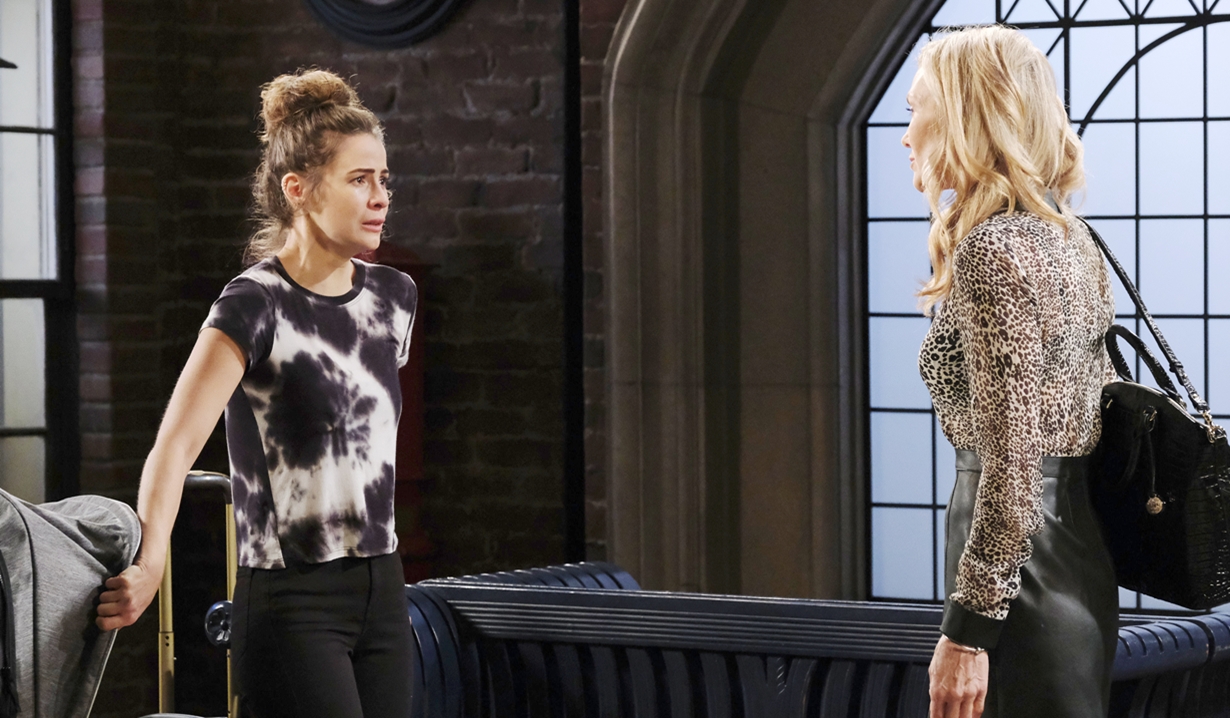 On the park bench, Ben and Ciara kiss while eating takeout. She opens her fortune cookie and says, “Oh my God.” Instead of a quote inside, the fortune reads, “Will you marry me?” Ben asks and gets down on one knee to ask, “Ciara Alice Brady, will you marry me?” Ciara cries, “Yes, yes, of course, Ben I will.” They kiss. He admits he’s been planning it. She asks, “Doesn’t this include a ring?” Ben opens a ring box and there is a washer in there. He doesn’t have money to buy her the ring she’ll love. It came from the carburetor on her father’s bike. They walk to their Salem Inn room. Ben wants sex but Ciara wants to plan the wedding. 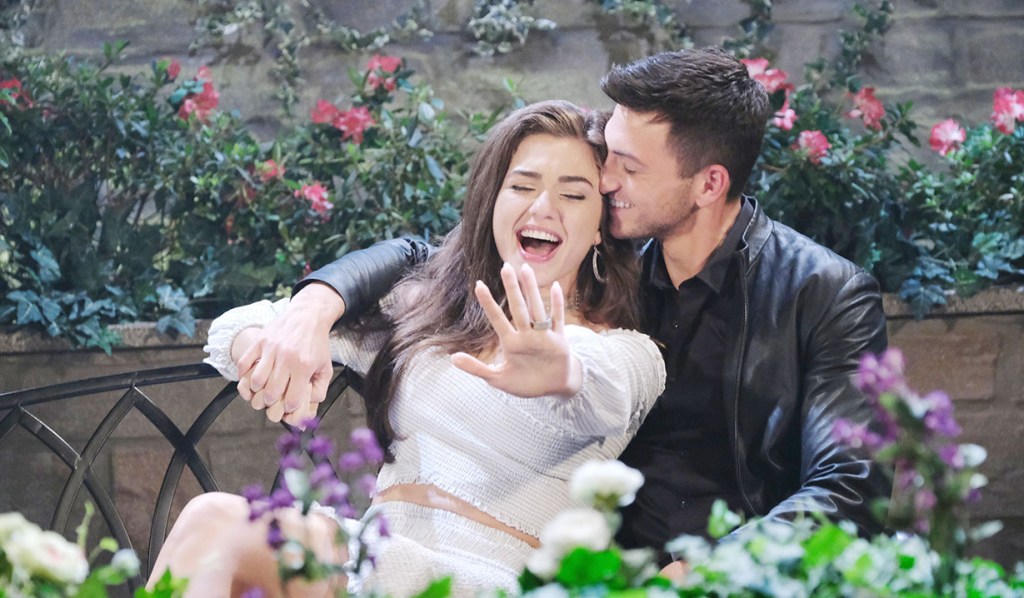 At home, Hope leaves Ciara a message to call and Steve tells Hope he’s going to pay his respects to his sister.

At Adrienne’s grave, Justin tells Adrienne that Maggie’s in prison for causing her crash and just learned that the accident took the life of Sarah’s baby. He talks about the baby switch and says he misses how she listened. Kayla appears and apologizes for the interruption. She came to tell him he was right. She was “upset” that Steve went home with Hope – with anyone but her. Justin understands. Being at Adrienne’s grave has shown him just because that person isn’t with you doesn’t mean your feelings are lessened. Kayla comforts him. Steve and Hope arrive. The men are kind. They choke up a bit. Steve’s sorry for Justin’s loss. Justin knows how close he and Adrienne were. They leave and Steve apologizes for taking so long to say goodbye. He wishes he could have stopped the accident. He leaves a pink rose. He cries that he misses her. Hope hugs him, feeling his pain.

In Paris, Xander and Brady find Abby and Chad’s empty apartment and a toy left there. They find Rex and he tells them Sarah left. He asks them to go easy on Sarah and calls what Xander did to Sarah unconscionable. He wants Xander to stay away but Xander can’t do that. Sarah is in trouble and needs him. The men go.

Meanwhile, Kristen finds Sarah at the train station. “Where the hell do you think you’re going with my baby?” Kristen demands. Sarah sniffs and calls the kid her daughter. She refuses to let anyone take her away. Kristen knows Sarah loves her. Sarah argues that she nursed her, she helped her through cancer. Kristen knows but says it should have been her. Those moments were stolen from her. Sarah calls Kristen a bad person incapable of being a good mother. She’ll scream if Kristen tries to take her. Kristen says she’s grateful for the love Sarah has given to Rachel but for the last year, “I spent time grieving yours.” Kristen says her baby is alive and she’s so sorry that her joy is Sarah’s grief. Kristen thanks her for everything she’s done this whole year. She asks Sarah to hand her over. Sarah sobs and kisses Rachel then hands her over. Brady and Xander appear. Brady and Kristen hold their daughter, happily. Brady wants to get a hotel for the night then return to Salem but Kristen can never go back to Salem. She’ll go to prison. Brady offers to talk to Victor but Kristen doesn’t believe he’ll listen. She can’t spend another moment away from their baby. Brady agrees to disappear with her. She loves him but can’t let him do that. He doesn’t know how he’ll get by without the two of them but knows Victor’s a threat to all of it. If he has to let her go to protect her, he will. He tells Rachel he loves her and says his heart will be with her. Kristen promises to talk about him and give her the life she deserves. They cry and kiss goodbye. 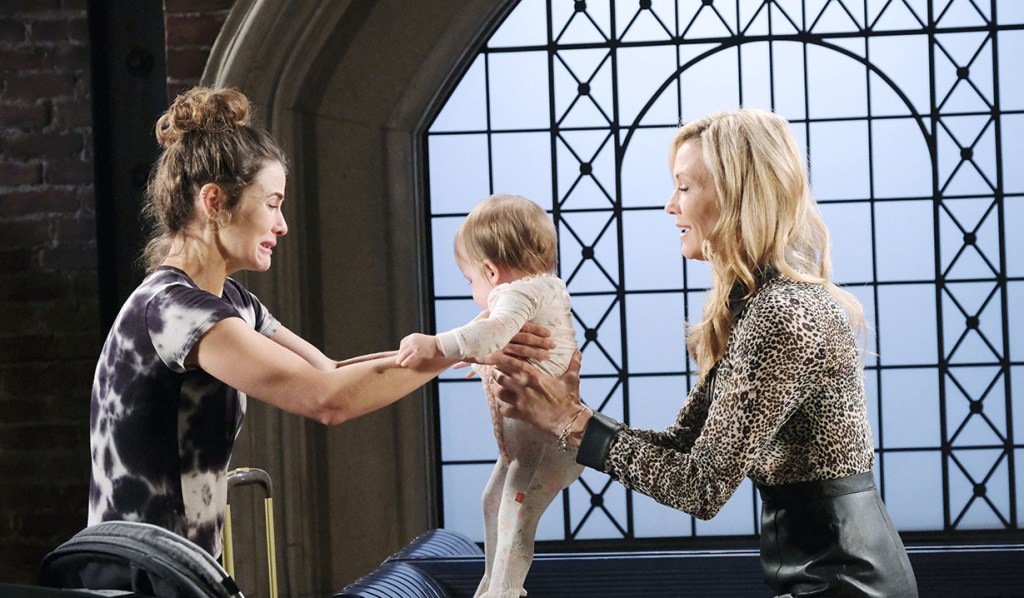 Sarah returns to Abigail and Chad’s apartment. She tells Rex that the baby is “with her parents.” She asks why he’s still there. Rex knew she’d change her mind about the baby and give her back. Besides, he knew she’d need a friend. Sarah cries. Rex thinks losing two children is more than anyone can handle, especially alone. He holds her. Xander arrives and Sarah yells that she doesn’t want to see him again for as long as she lives. Xander goes.

At the pub, Kayla tells Justin she’ll get used to seeing Steve around town. He’ll help her through it. They kiss and Steve and Hope appear. They offer to leave but Justin asks them to join their table.

Abby attacks someone else.

Ben Proposes to Ciara With a Note in...