Thursday May 7, 2020: On Days of our Lives today, Steve and Hope bond over their similar experiences, Justin questions Kayla's feelings about Steve, and Abigail goes missing. 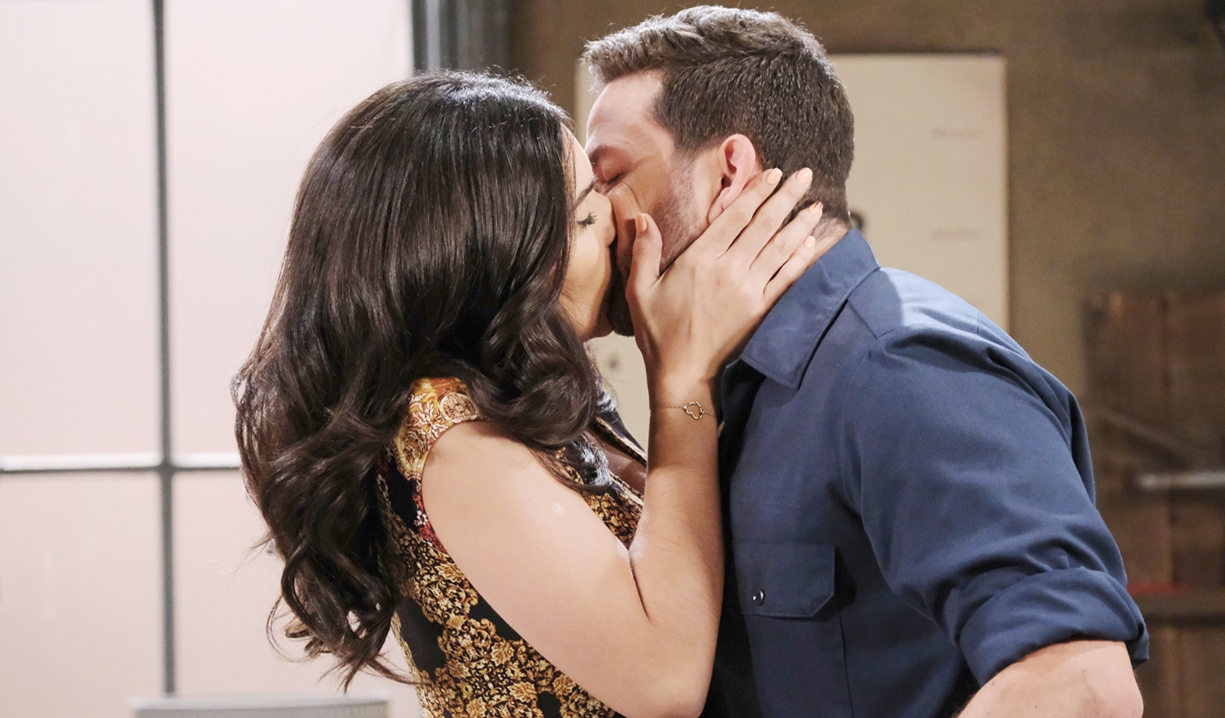 In the square, Ben and Ciara canoodle until he has to get back to work with Jake. They debate his resemblance to Stefan. Ben reflects that he liked Stefan a lot…it’s like he’s getting a second chance with him. Ciara finds that sweet – they kiss. 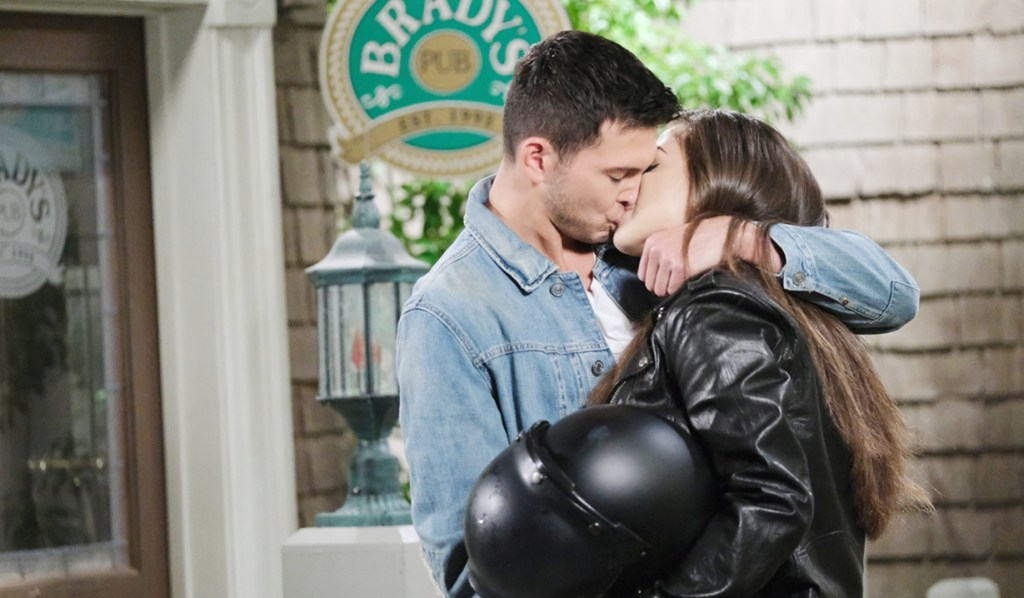 By the nurses’ hub, Justin declines Kayla’s lunch invitation, but will see her at dinner. He walks off and Marlena appears to question Kayla about Steve being discharged early. Kayla admits he was still weak, but it’s better for him to recuperate at home. She reveals he moved in with Hope. The doc wonders if that upsets her. Kayla shrugs that Hope’s still family to him. Marlena thinks there’s more to it – they shared a mutual experience they feel guilty about. Kayla concedes the whole thing infuriates her – Steve should have left town. She ruminates that Steve has hurt her repeatedly and Justin hasn’t. Marlena learns Kayla can’t suppress her feelings for Steve and counsels that she should be honest. Elsewhere, Ciara joins Justin and learns that Victor’s been taken for testing. They’d like the police to find Kristen, lock her up, and release Brady. Ciara muses the family’s a mess and reveals she’s staying with Ben. She confides that her boyfriend’s new boss looks exactly like Stefan. Justin sighs; the last thing they need is another DiMera back from the dead. He asks after her mother and learns Steve is living with her. Justin’s taken aback. 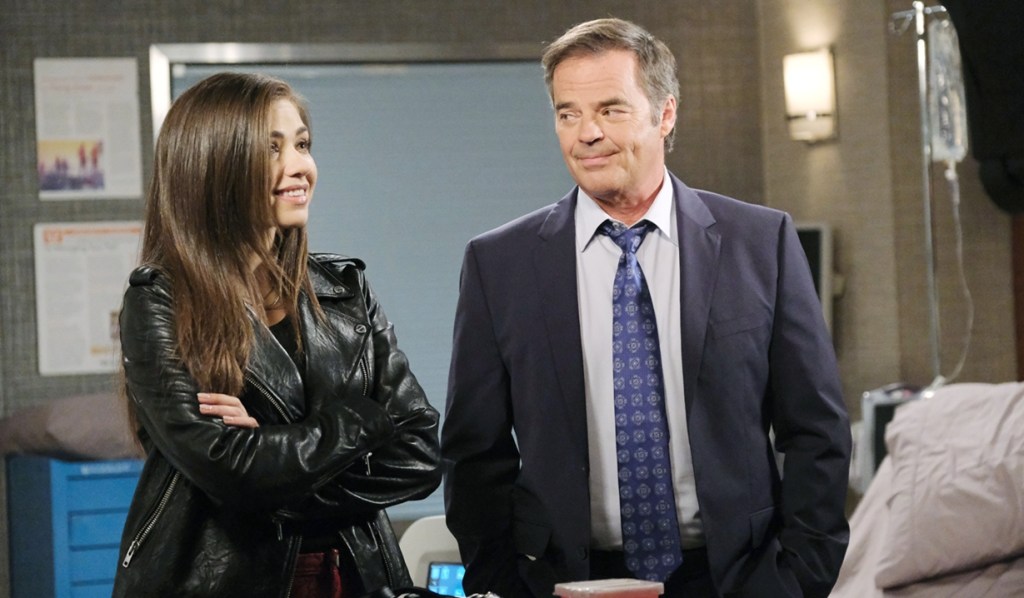 At Hope’s place, Steve awakens and spies a framed picture of him as Stefano. Hope appears and explains she painted it as Princess Gina. She shows him evidence regarding Stefano and Gina the police brought by. Steve questions her and learns Stefano thought he wasn’t man enough to fill his shoes. Steve wants to get rid of the portrait, so they carry it outside. He punches it, then invites Hope to join in. He gives a dirty laugh as she throws something at it. They kick it, then high-five and hug. Inside, talk turns to Kayla staying with Justin. He shrugs – maybe it’s true she doesn’t care about him anymore. Hope smirks, “You believe that?” Steve thinks she’s better off. Hope wants them all to be happy. Steve urges her to get on Team Justin – Kayla can’t be happy or safe with him. They briefly discuss their similar experiences before Steve recalls what a bad dude he used to be. Hope asserts he’s a good man – she’ll always be there for him. They toast to friendship. 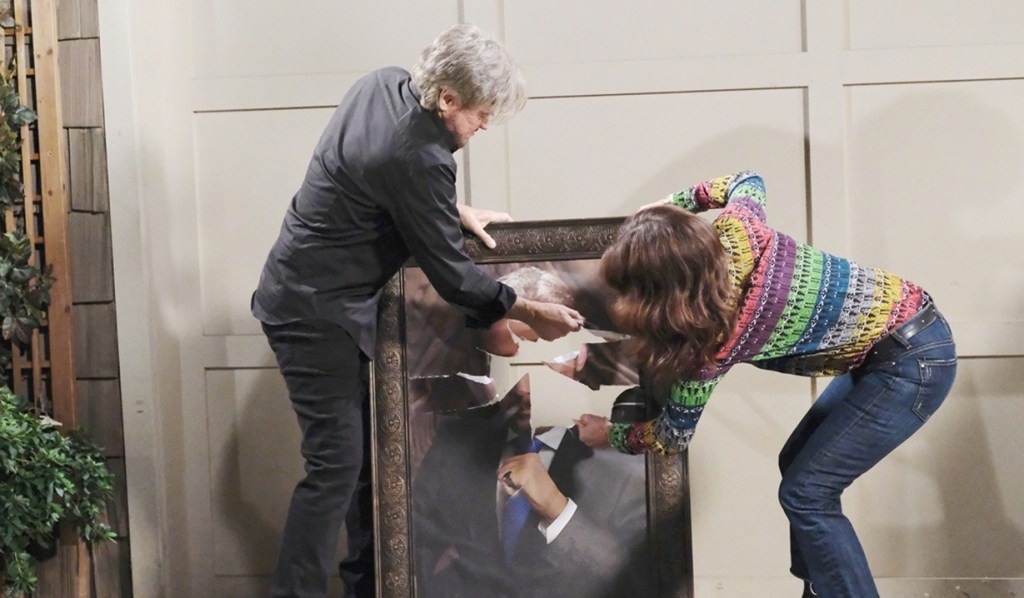 In the DiMera mansion, Gabi flashes to Jake denying being Stefan and hisses, “I don’t believe him.” Chad enters and they spar verbally about the drug compound that landed Abigail in the hospital – Gabi would have had access to it and he plans to prove she did it. Gabi maintains she’s innocent. She swerves to Stefan being alive and vows she’ll prove it. They argue as Chad reminds her she gave Stefan’s heart away. Gabi plans to prove everyone wrong.

In the garage, Jake recalls his run-in with Gabi in the park as he reads an article about Gabi on his tablet and smiles. Ben enters and Jake smirks that he’s reading an article about his ‘wife’. He fills Ben in on Gabi slapping him – he’s glad he’s not Stefan as his ol’ lady is a pain in the ass. Gabi appears, glowering. Arguing ensues about whether Jake is actually Stefan. Jake grabs her arm to usher her out and she falls. Jake takes her upstairs to ‘patch her up’, where she learns he knows all about her after looking up Stefan online. Gabi decides there’s a simple way to find out what she wants to know and pulls Jake into a kiss. Downstairs, Ben is approached by two thugs who think he’s Jake and demand he ‘hand it over’. One brandishes a crowbar threateningly. After, Ciara arrives to find Ben knocked out on the floor.

Chad arrives at the hospital to ask about Abigail. Marlena explains they don’t have a lot of information on the drug yet. Chad’s terrified – she mistook him for Stefan. Talk turns to the lookalike Gabi saw, before Marlena warns it’s too soon to say if Abigail might have permanent damage. Chad plans to keep Gabi away from her. Meanwhile, Kayla joins Justin in Victor’s room and he questions her not mentioning Steve staying with Hope. He senses it bothers her. Kayla gawps – does he think they’re having an affair? Justin doesn’t, but her going there confirms his suspicions. By the nurses’ hub, Chad rushes up to Marlena and asks, “Where’s Abigail?”

Sarah hits a snag in her plan.

Maggie Sobs Upon Realizing That She...

Eli Reams Lani Out for Helping...