Tuesday May 5, 2020: On Days of our Lives today, Lani helps Kristen find Rachel, Nicole takes Eric's mind off of losing Mackenzie, and Sarah ties Rex up and holds him hostage. 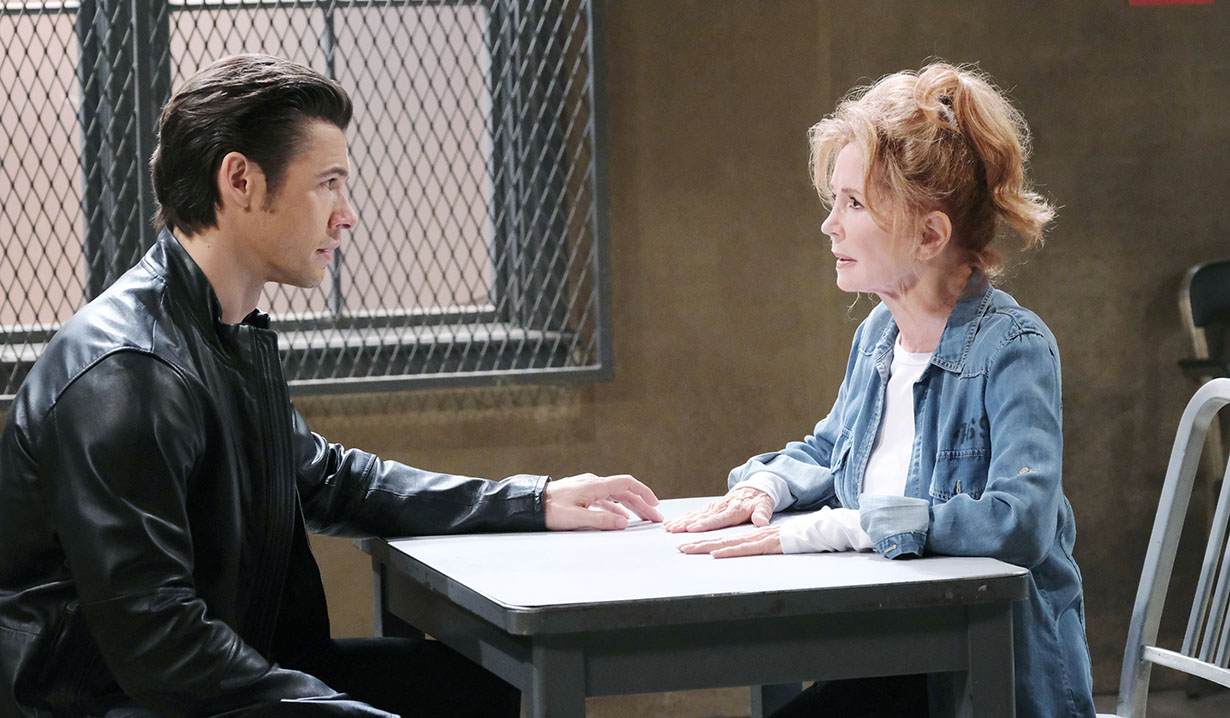 Eric dreams that he’s excited for Mackenzie’s birthday coming up when Nicole reminds him his daughter is dead. He wakes up, upset. He explains the dream to Nicole who is sorry. She kisses him and then tells him that they were right. Kristen stabbed Victor, not Brady.

At SPD, Eli demands to know where Kristen is. Brady doesn’t know. Eli knows Brady’s covering for Kristen. Victor woke up and confessed that Kristen stabbed him. Brady asks if Vic’s going to be okay. Eli doesn’t know. Brady lies that Victor is blaming the wrong person. Eli tells him Kristen’s gone missing. Some coincidence she took off just as Victor confessed she tried to kill him. Brady says she’s searching for Rachel. Eli wonders if Lani’s helping her. He reviews SPD security footage and sees Lani leaving with Kristen. 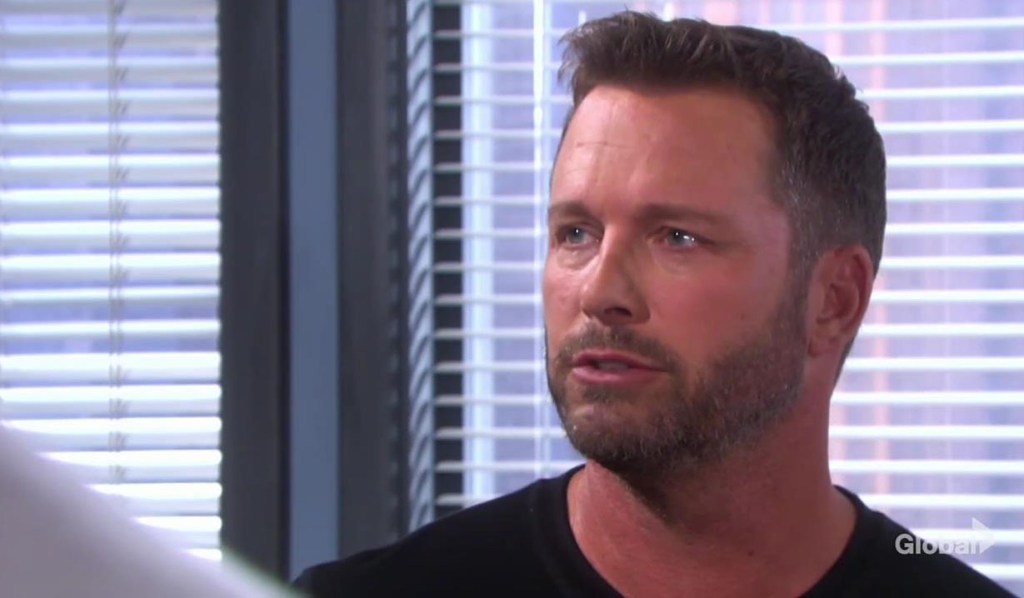 Kristen paces in some dive motel. Lani arrives. Kristen realizes Lani shouldn’t be here and she shouldn’t be asking for her help. She doesn’t want to ruin her life the way she did Brady’s. Lani argues she wants to help. They listen to Rex Brady’s cut off voicemail message on Kristen’s phone and ponder what that was about. Kristen wonders if he knows where Rachel is. Lani calls around and learns Rex is in Paris.

Xander arrives at the prison to see Maggie, who wants to know what happened between him and Sarah. Xander blames himself. He lies that Sarah decided marriage wasn’t for her. Some inmate lurches by and says she’s sorry about Maggie’s “old man.” Maggie is confused so the woman tells her he was stabbed. Maggie’s jaw drops. She turns on Xander for keeping this from her. Xander says he’ll be okay. The inmate tells Mags that Brady did it. Maggie is shocked and demands to know why. The woman goes and Xander tells Maggie Kristen stabbed Victor. Maggie forces Xander to tell the truth so he tells her Sarah’s baby died the night of the accident, not Kristen and Brady’s. Maggie starts to cry.

In Paris, Sarah apologizes to Rex for hitting him. He glares at her, gagged, and bound to a chair. She lets him sip water through a sippy cup and he stares at the pastry nearby. She asks him to swear not to call for help. He does so she removes the gag. He eats and again attempts to get Sarah to change her mind about stealing Rachel. Sarah reminds Rex that Kristen is a “sociopath and a murderer.” Rex knows all of that. He says there’s a large social network that will protect “Mackenzie.” Sarah doesn’t believe that’ll protect the baby. Rex finds what Sarah’s doing to be crazy. She’s playing God the way Kristen and Victor do. Besides, “She’s. Not. Your. Little. Girl.” Rex says, slowly. He knows Sarah will regret all of this once she recovers from the trauma. Sarah accuses him of enjoying this but he truly isn’t. He cares about her. She doesn’t believe him and brings up his cheating. He already acknowledged his wrongdoing. He wants to talk about her. She sobs over the accident. Rex tells her that people will be searching for him. His cell phone rings. It’s the hospital. He begs her to let him take the call. Later, he asks her to open up to her mom but Sarah calls her a drunk and admits she doesn’t trust anyone anymore. 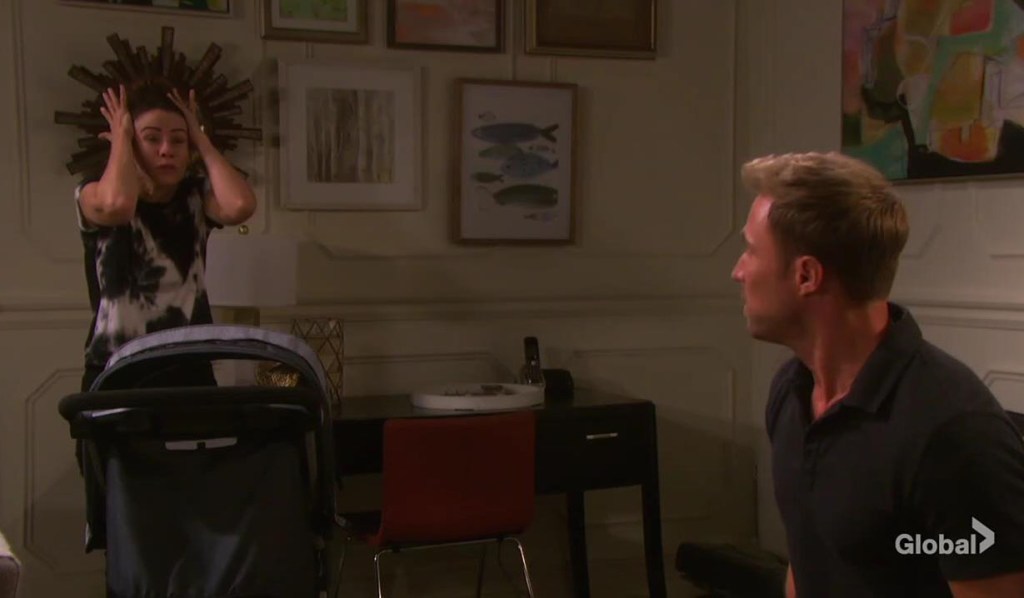 Eric and Nicole take Holly to the park where they have a picnic. Nicole can sense Eric’s distant and tells him she’s there for him. He’s grateful for the distraction. They smooch and he goes to play with Holly. Later, they’re goofing around with videos when Eric tells Holly he loves her. “I love you too, Daddy,” she says, shocking Nicole and Eric. Thrilled, they allow her to call him that. 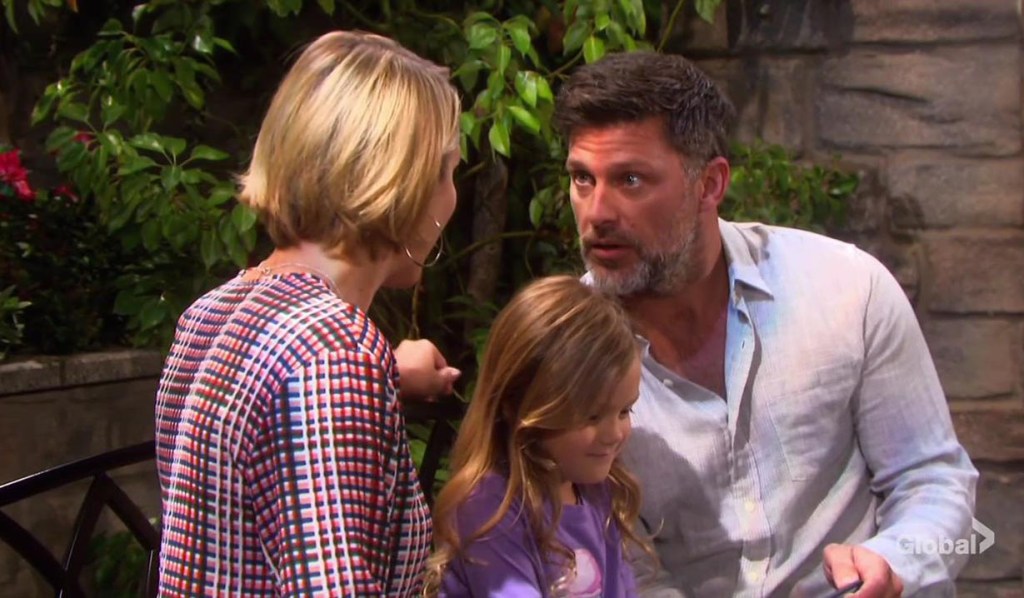 Sarah Bashes Rex Over the Head When...

Maggie Sobs Upon Realizing That She...