Monday May 4, 2020: On Days of our Lives today, Abigail has another hallucination, Kristen confesses to Lani, and Rex tries to call Kristen but is stopped by Sarah. 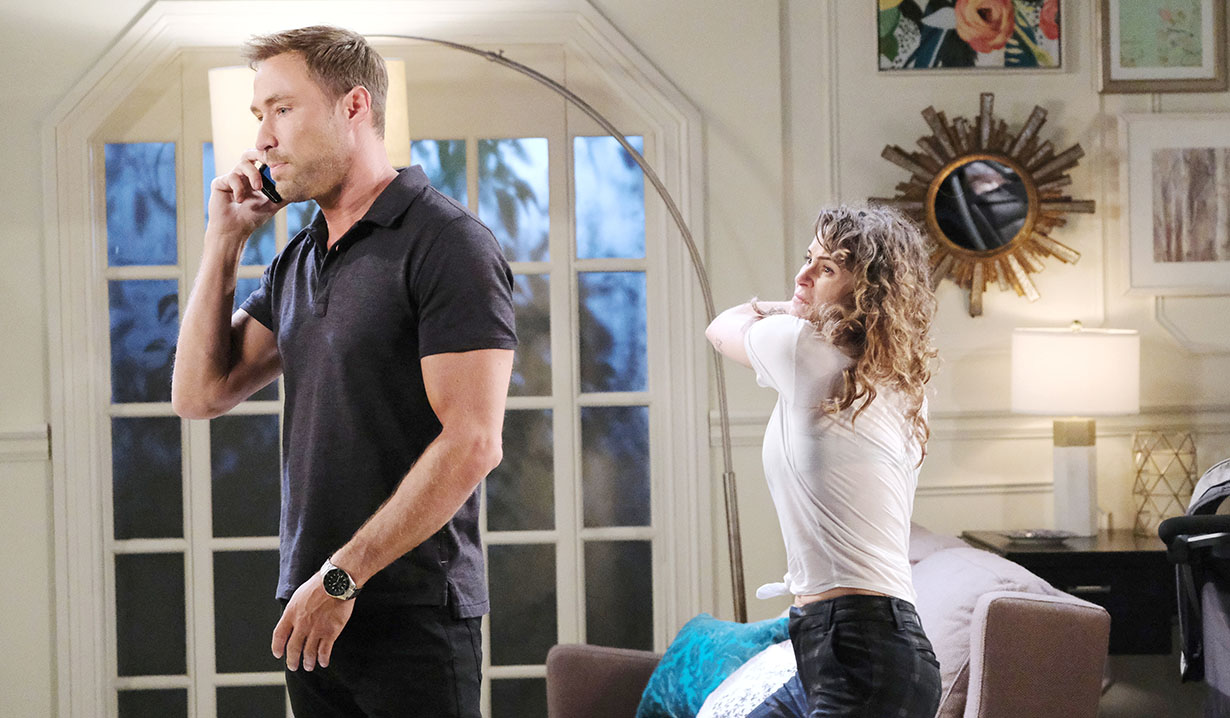 At SPD, Kristen’s relief over Victor waking up and not fingering her for attempted murder is short-lived since Lani explains Eli’s waiting until Victor can talk. Lani tries to comfort her, knowing Sarah loves the baby and will keep her safe. Lani suggests Victor may not press charges against Brady, knowing he was at the end of his rope. Kristen sighs and she flashes to stabbing the Kiriakis patriarch. She whispers, “This should not be happening.” As she talks, Lani realizes she’s somehow involved. Kristen finally confesses she stabbed Victor. She sobs and asks to be let go. Lani cries. She confessed to a cop in a police station. Kristen thought she was confessing to a friend. She plays on Lani losing her own son David. If she could give Lani the chance to see her little boy, she’d do it. Kristen begs. 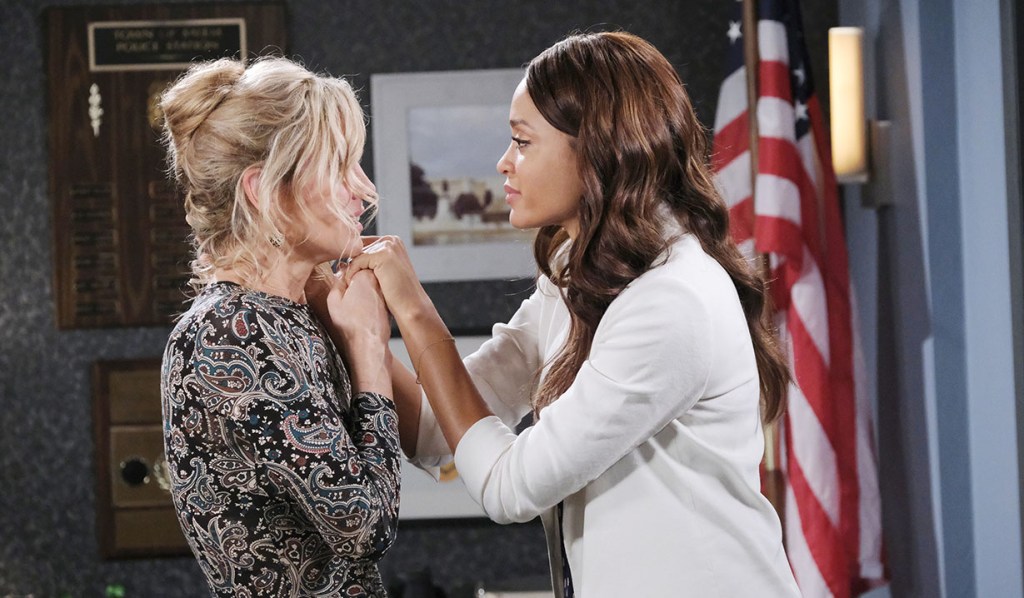 At the hospital, Victor confirms Kristen stabbed him, not Brady. He tells the story. In her own room, Abby’s visited by Chad. She holds him, making sure he’s real. She was told the drug should be through her system. Chad will make Gabi pay. He won’t back off until she’s back in prison. Rafe arrives. Chad wants to know what he’s doing to prove Gabi drugged Abigail. Rafe has a lot of cases on the go and tells him about Victor’s stabbing. Chad says Brady confessed. “Case closed.” Rafe sighs. He tells them anybody could have drugged Abigail including Chad. Rafe is taking the case but isn’t ruling anything out. If Gabi’s the culprit, he won’t let her get away with it. Chad is grateful. Once he’s gone, Chad starts getting upset again. He yells and waves his arms. He stresses Abigail out so much she hallucinates that Stefan is trying to kill him. Once Stefan’s on the floor, Stefan comes at her. Abigail fights Chad as she sees Stefan kicking Chad. Chad yells, “Stop! It’s me.” Abigail struggles and Chad screams for help. Kayla rushes in with drugs and Abigail goes off on her. She thinks Kay’s trying to drug her. She yells for Chad as Kayla injects her with a sedative. Abigail passes out as Chad blubbers, whispering he’s sorry into her hair.

In Paris, Rex attempts to talk Sarah out of going on the run with Brady and Kristen’s kid. Sarah says it’s better than her being brought up by “a lunatic” like Kristen. Rex gets it but he has to call the cops. He calls Rafe and before he can tell the truth, Sarah grabs his phone and disconnects. She details that her baby died of a brain injury after giving birth at the side of the road. Rex feels awful. Sarah begs him to go and pretend he never saw her. Rex will always care what happens to her, but he can’t do this for her. Mimi kept his child, Emily, for a year. Sarah needs to think about what Brady’s feeling. “You cannot replace one child with another,” he says. What Victor and Xander did was monstrous but she shouldn’t want “Mickey” to grow up thinking she’s her mother and learning it’s a lie. Sarah sobs. She realizes she has to come clean. They make their way to Abigail and Chad’s flat. He says he’d call Brady but he is in jail. Sarah’s eyes shoot daggers. He tells her what went down in Salem and Sarah wonders how can she give the baby back now? Rex heard Kristen changed. Sarah doubts that. “That woman would stab her best friend in the back to get what she wants!” Rex calls Kristen to tell her to call him back. He has something important to tell her. Suddenly, Sarah smashes Rex over the head. He goes down. 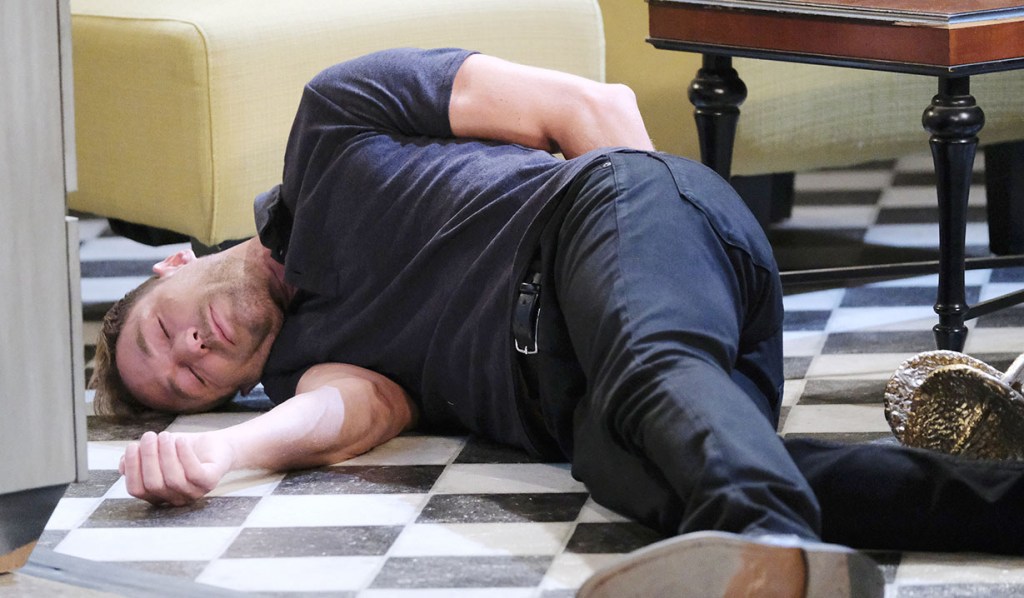 Gabi is shocked to her core when she runs into Jake at the park. He turns to go when she says his name. He realizes she’s Stefan’s wife, Gabi. He tells her Ben and Ciara told him about them. Jake’s sorry for her loss. Gabi thinks he’s lying. She calls him an SOB and slaps him. She tells him to drop the phony accent. Jake insists he’s not her husband. Gabi wants to know why he’s laying low. He tells her his name is Jake and he’s a mechanic. Gabi demands to know why he’s lying to her. 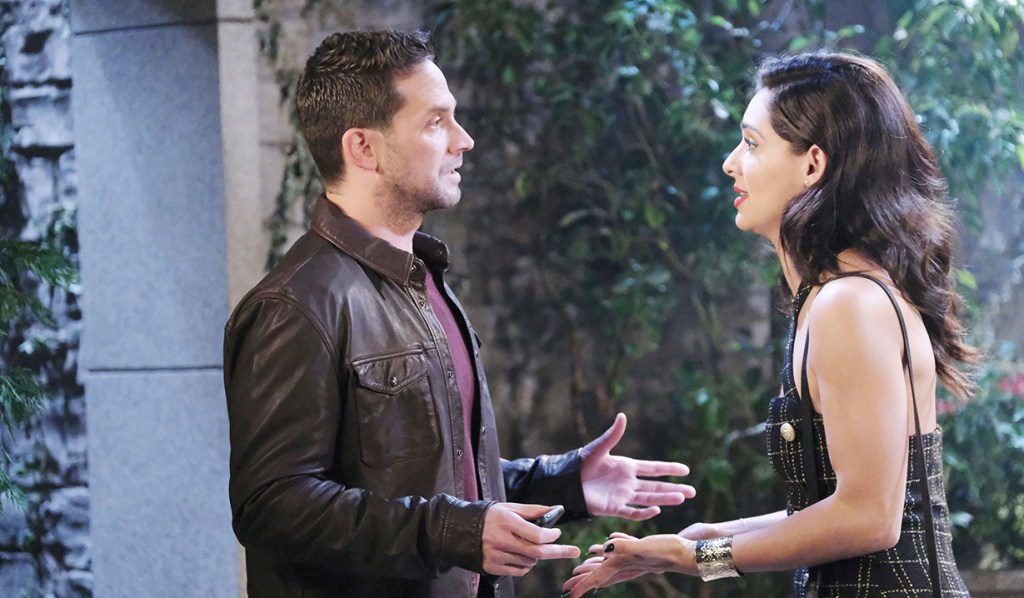 More: Days of our Lives May sweeps

At home, Gabi wonders why Stefan is doing this to her. She plans on finding out. Meanwhile, at the garage, Jake flashes to Gabi asking why he’s laying low before he gets back to work.

Eli lets himself into Kristen’s room at Salem Inn in order to arrest her. He calls Rafe to tell him that there is no sign of her.

In the park, Lani lets Kristen escape to go find her daughter. They embrace and Kristen goes. 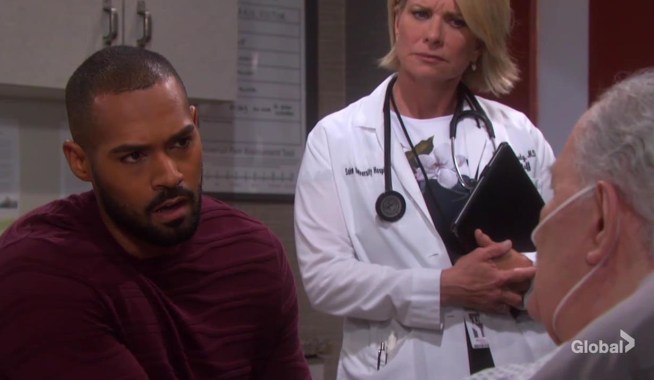 Victor Remembers Who Stabbed Him As Kristen Considers Finishing the Job 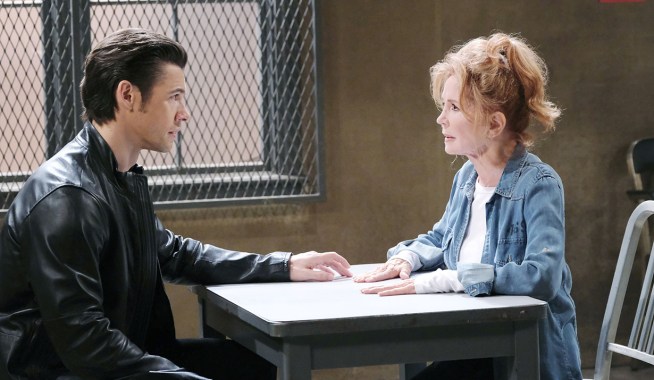