Tuesday April 28, 2020: On Days of our Lives today, Marlena examines Abigail for a relapse, Hope and Steve commiserate over not being able to forgive themselves, and Orpheus wants to kidnap David. 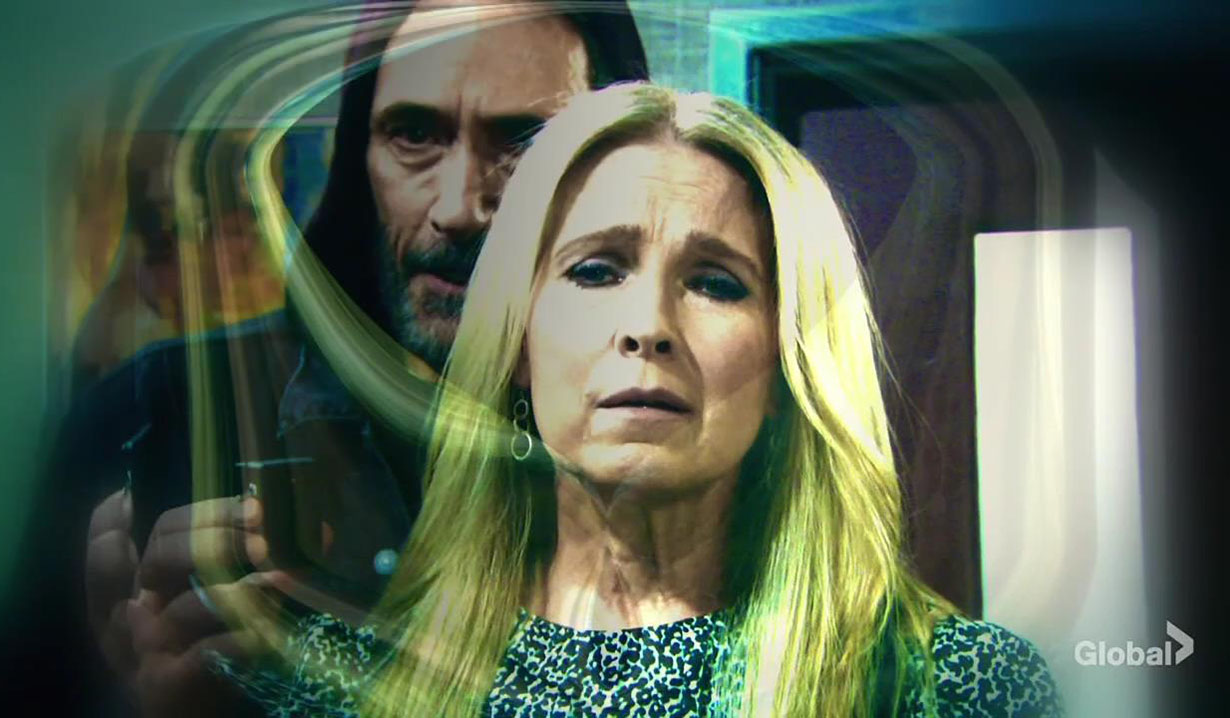 Jennifer and Jack race into Abigail’s room at the hospital. Chad fills them in on Abby’s hallucinations. Jenn asks if she’s relapsing. Abby wakes up and sees Orpheus hovering over Jennifer instead of Jack. She starts to panic and sees Jennifer has a bomb strapped to her. They try to calm her down but she yells at “Orpheus” to get away from her. Eventually, Chad calms her down. She realizes she’s been seeing things and apologizes to her parents who are beside themselves. At the hub, Kayla tells Justin that Victor had surgery but not to get his hopes up. Steve wheels himself over and watches the couple embrace. Once Justin leaves, Steve tells his ex he’s glad she took his advice and stayed with Justin. Kayla tells him to go to hell. She didn’t take his advice. She never left Justin and accuses him of being egotistical. Steve backtracks. He’s not trying to bring her down. He just thinks she’ll be happier with Justin. Kayla goes to call his eye specialist while Steve goes back to bed and flashes back to Kayla bringing him Caroline’s chowder last time he was in the hospital. He mutters about loving her which is why he had to let her go.

At the townhouse, Marlena tells John about Abby’s hallucinations. They’re saddened by the news. Marlena will stop by to see if she can help. Talk turns to Brady. John can’t believe he stabbed Victor. John asks how Eric’s doing. Marlena says he’s struggling with Sarah kidnapping the baby. Hope arrives as John’s leaving, hoping she can help with their situation. It’s the least she can do and apologizes again, especially to Marlena. John thinks she and Steve need to start forgiving themselves.

At SPD, Rafe sets a photo of David on his desk. Justin arrives. They catch up about Brady and the stabbing. Justin is filing for a motion to throw out Zoey’s petition for custody of David but when he learns that Zoey’s David’s aunt, he says he’s not sure it’ll happen. Rafe argues that Zoey’s family is a bunch of criminals. Justin reminds him people could say the same about Rafe’s family. Rafe gawps. What Rafe has going for him is a dead woman’s wish to have him raise her son. Justin goes and John arrives to see Rafe and asks if there’s evidence that Brady really stabbed Victor. Rafe’s not at liberty to say. Rafe will do all he can to help Brady. John advises Rafe do whatever he needs to do to keep Orpheus from his kid. He goes and Justin returns. His adoption is on hold because Zoey won the motion. It’s just a regular custody battle now. Rafe will dig until he finds something damaging about Zoey.

Orpheus, Zoey and Evan gather at the park to discuss David. Orpheus makes it clear to Zoey that he’s to be kept in the loop. She lets them know she told Rafe she was suing for custody since she’s David’s aunt. Orpheus reminds Evan of how Jordan tried to come between him and his kid “and look how that ended.” Zoey tells Orpheus to stop it. She tells him not to underestimate her. Evan agrees since he calls her a brilliant lawyer. Orpheus can’t trust the system and thinks it’s better to snatch the kid. Zoey calls that a stupid idea so he agrees to let them do things their way. Zoey runs to court and Orpheus complains that she needs an attitude adjustment. He reminds his son that Zoey doesn’t need to know about what they did. Evan knows. Zoey appears. She tells the men the good news that she won. After Orpheus goes, Zoey confronts him about what they were talking about so secretively. Evan says to drop it but Zoey says it’ll come out in the custody battle. 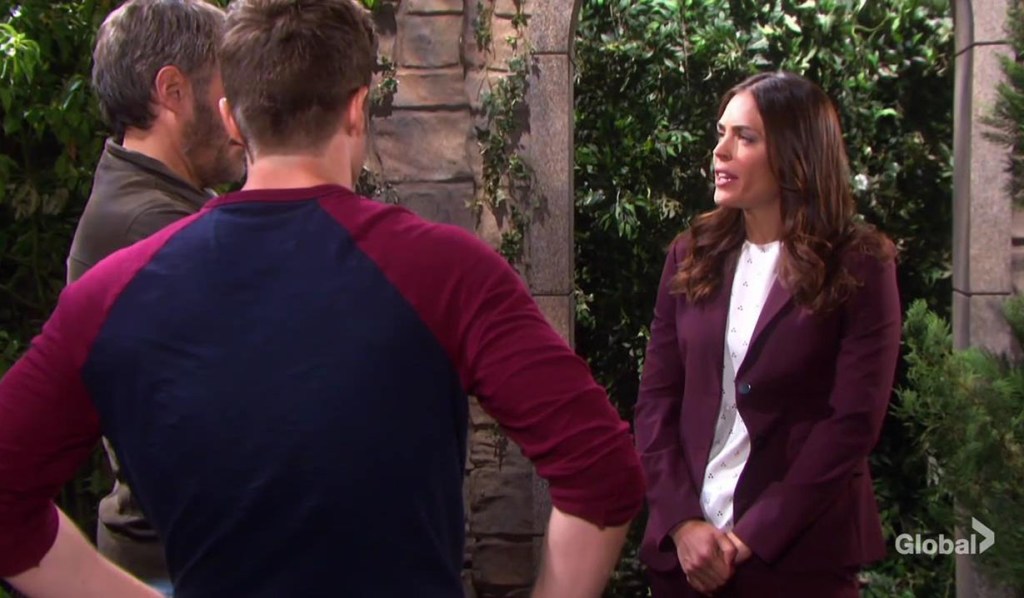 Chad snuggles Abigail in her hospital bed as Marlena arrives. Jennifer’s grateful to see her. Marlena sends everyone away while she has a session with Abby. Marlena knows Abby’s been under stress and asks how her marriage is. She says it’s never been better. Marlena wonders if she’s lying because in the past she has. Abigail promises that she’s being honest and declares, “I’m not crazy.” She can’t go through this again and lose her family. Hope visits Steve with a sandwich from the pub. They share that John and Marlena have forgiven them but neither can forgive themselves. They share his sandwich and Kayla walks in. Steve’s eye is damaged beyond repair. Steve shrugs it off. He’s been through this before. She gives him his patch back. In the hall, Abby’s family gathers. Marlena appears. She doesn’t see any evidence that Abigail is in danger of relapsing. She goes to find the test results. Meanwhile, Abigail hallucinates Orpheus again but tells herself he’s not real and he fades away. Jenn and Jack visit Abby and Jenn goes to take care of her kids while Jack tells his daughter he’ll do what it takes to help her get better. They hug and Chad returns. The lab results show something isn’t normal. “Somebody drugged you.” 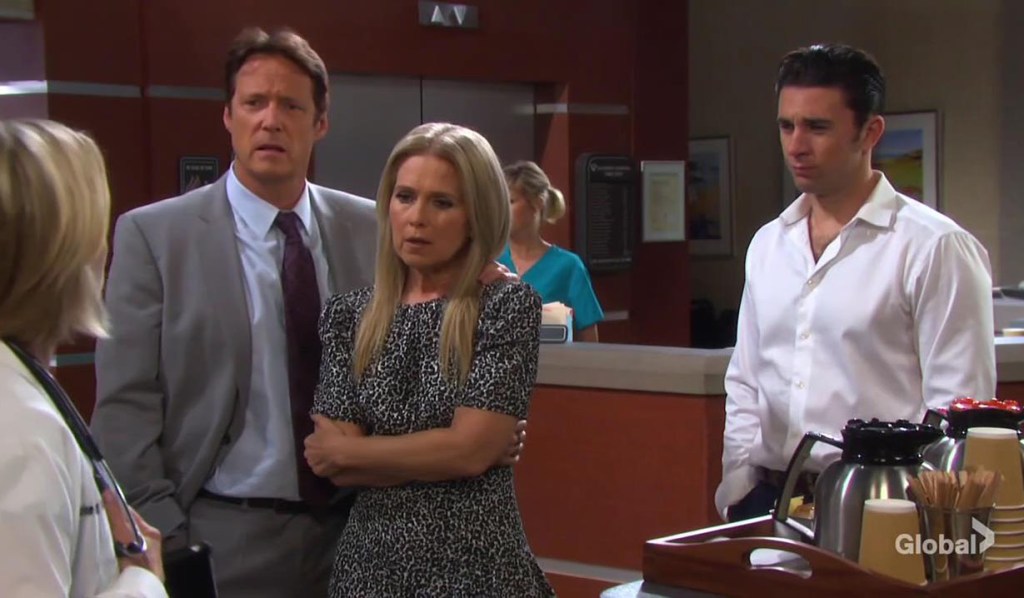 John and Marlena are joined by Orpheus in the square. John tells Milo to get lost but Milo thinks they can help one another. 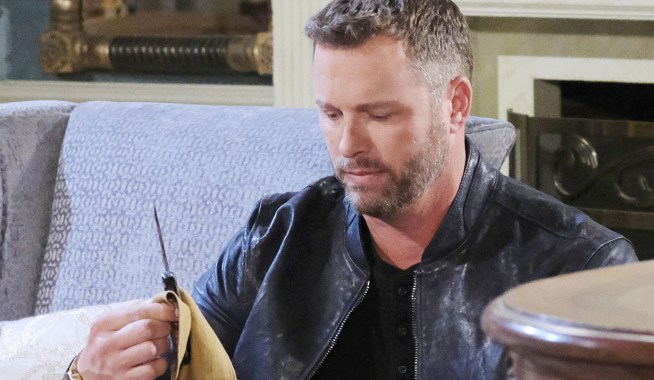 Chad Accuses Gabi of Drugging Abigail With a Hallucinogen 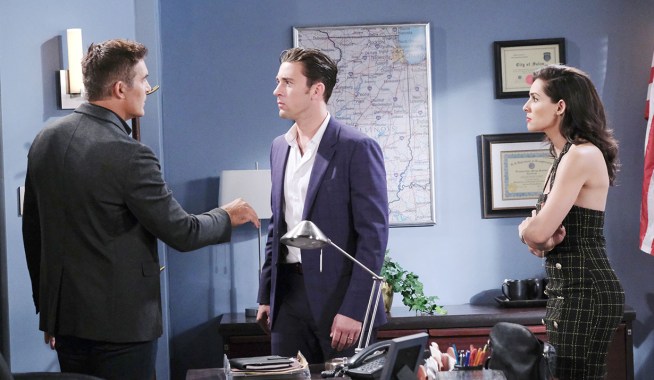