Tuesday April 21, 2020: On Days of our Lives today, Gabi sees who she thinks is Stefan, Anna and Tony leave Salem, and Kayla lets Justin know Steve dumped her. 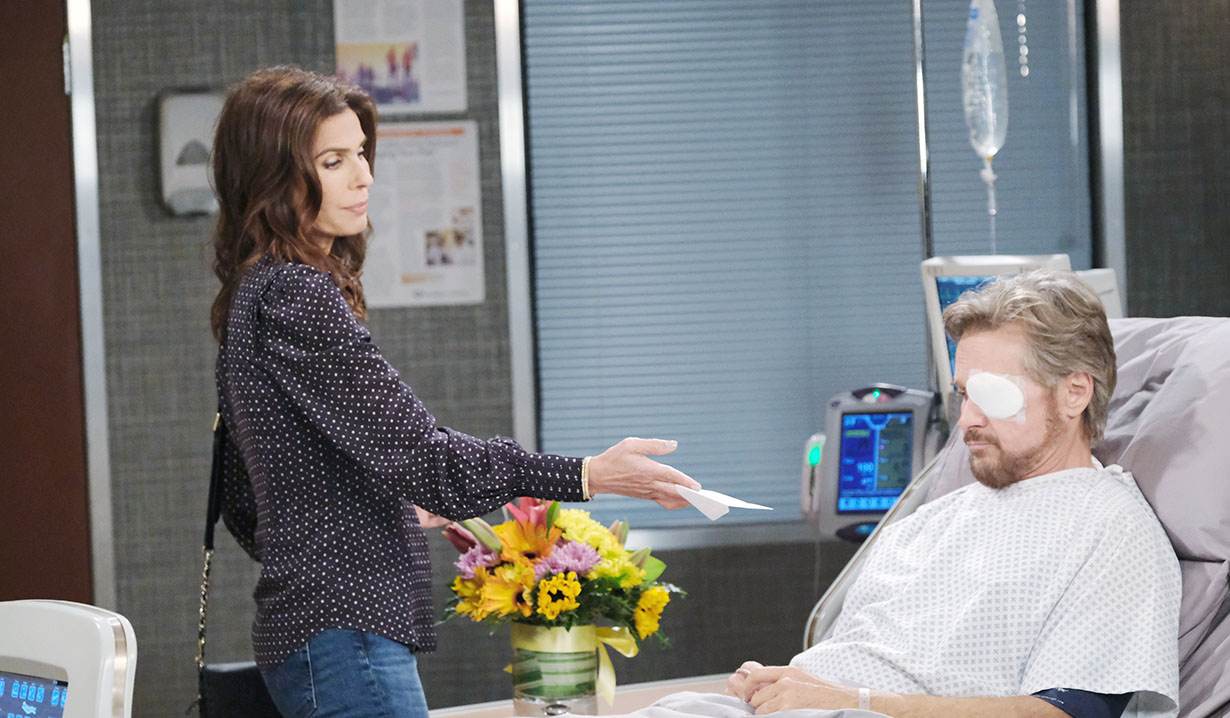 Abe’s surprised to see Kate at Julie’s Place where he’s conducting interviews for Spokesperson of City Hall. She tells him she’s next. Abe’s angry that she gave his secretary a phony name. Kate was worried he wouldn’t see her and promises he won’t regret this. He berates her for her part in letting Stefano run free. Kate’s sorry for that. Abe says it’s not enough. Kate insists she was under Stefano’s spell in a sense but takes complete responsibility for what she did. Abe reminds her it’s her fault Theo got shot since she pulled him into her drama with the DiMeras. She wants a chance to start her life over and reminds him he has made mistakes. He installed a faux princess as commissioner and almost let an innocent man be executed…Jack was doing a better job and he had amnesia. Abe shakes his head. Kate says she respects him but knows the voters have lost confidence in him. She can change that with her “amazing” PR skills. She can spin things for him. 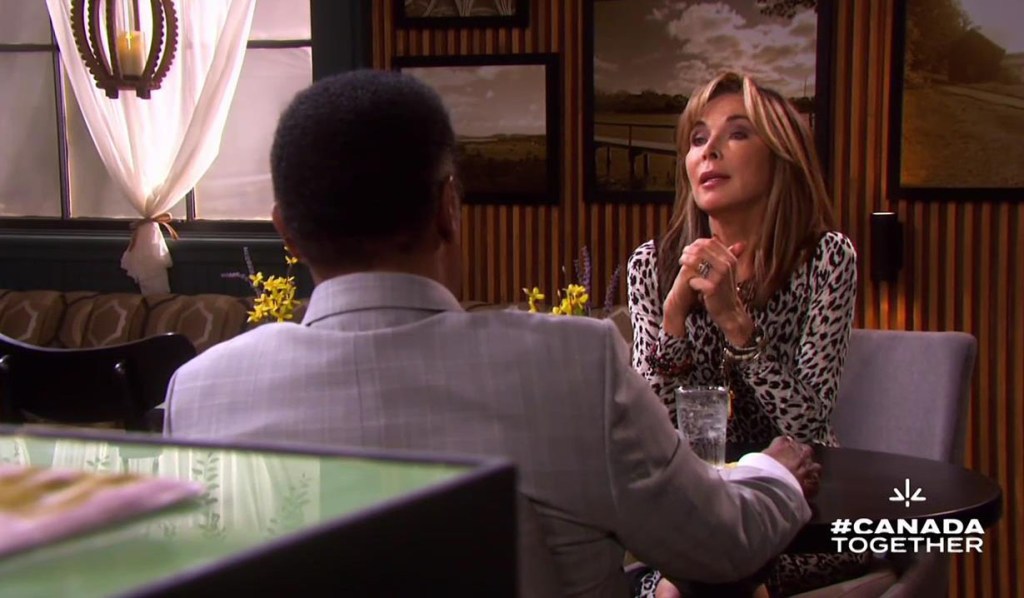 More: This is Us pilot recap, tear-jerking moments

Abigail comes upon Chad staring at Stefano’s portrait in the living room. He tells her that he and Tony got a hold of the microchip and destroyed it, but they still wonder how many chips are out there. Abigail mutters that the phoenix always rises from the ashes. The secret door opens and in walks Tony with wine. Anna appears. They’re leaving Salem and want to celebrate. Anna’s anxious to see Carrie and Noah. In her room, Gabi flashes to Stefan giving her the stunning engagement ring that was his mother Vivian’s. When a man named Simon calls, she learns her order for Gabi Chic was canceled. She rants about being a DiMera as much as Chad until he disconnects. She heads downstairs and overhears Tony referring to her as Gabriella Hernandez. She corrects him. She’s a DiMera. She lashes out at Chad for canceling her order for the fall fashion show. She turns on Abigail and mocks her mental illness and mocks Chad for being under “Stevano’s” brainwashing and wonders how easy it’ll be for him to get back under his influence. Tony gives the family wine while Gabi continues to rant. She heads to the office and everyone takes a sip, happy she’s gone. They wonder what to do with her. Abby suggests giving her Gabi Chic. Later, Tony says being a DiMera will mean something different going forward. 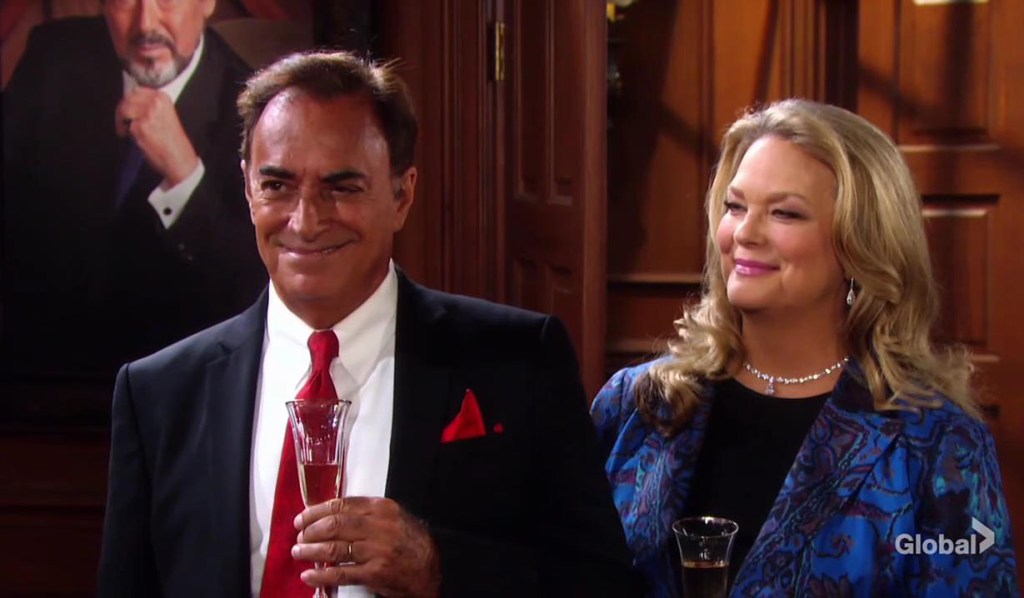 Justin stumbles upon a crying Kayla outside the pub. She just saw Steve. Justin assumes they’re reuniting. Kay explains that Steve wants her to be with Justin. Justin flashes to telling Steve that he took Kayla hostage and almost killed her as Stefano and asks if he told her how he found out. Kay says John told him. Justin doesn’t admit he told Steve but tells her he can’t be her consolation prize. Kay admits she can’t ride that rollercoaster with Steve anymore. Justin asks if she needs time to process but she only wants Justin. They kiss. 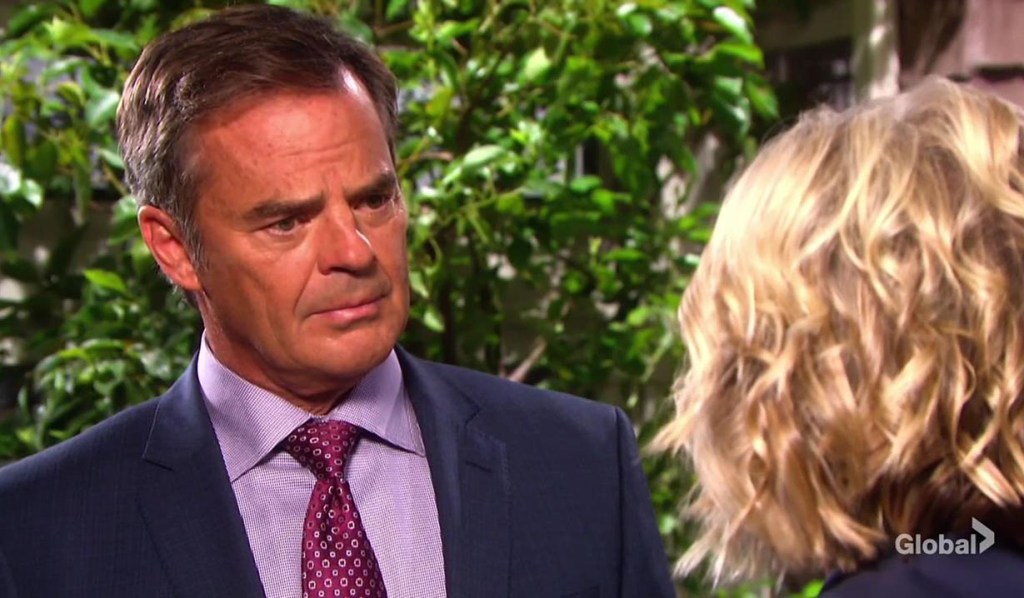 In the hospital, Steve flashes to Kayla snapping at him for making decisions about her welfare without her. Hope visits with flowers. “If it isn’t my partner in crime,” he says with a sigh. The flowers aren’t from her but he’s too grumpy to read the card. He lets Hope know he isn’t fighting for Kayla because of what he did to her as Stefano. Hope understands completely since she’s done unspeakable things herself as Gina. “It was my hands that pushed Jennifer off that balcony and my lips that kissed John.” She blames herself as does Steve. Steve finally reads the card. It’s from Anna, apologizing for stabbing him in the eye. If she had to do it over, she’d have picked a body part that didn’t ruin his vision. Steve and Hope burst into laughter. They reminisce when he first got his eye taken and how he terrorized her. Steve thinks Kayla’s safer with Justin who can give her a life he can’t. Hope talks about not being there for Kayla or Ciara, Shawn, or Claire this past year. She hasn’t felt like herself in a long time and worries she never will.

Gabi arrives at DiMera Enterprises and sees a man facing away from her in a chair. She gasps, “Stefan?”

Victor berates Xander for allowing the truth about the baby swap to come to light. 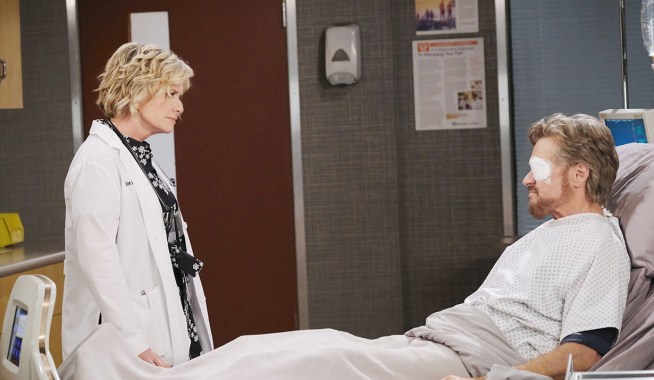 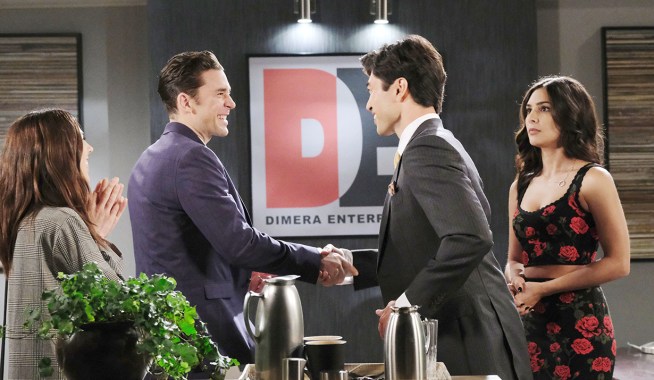